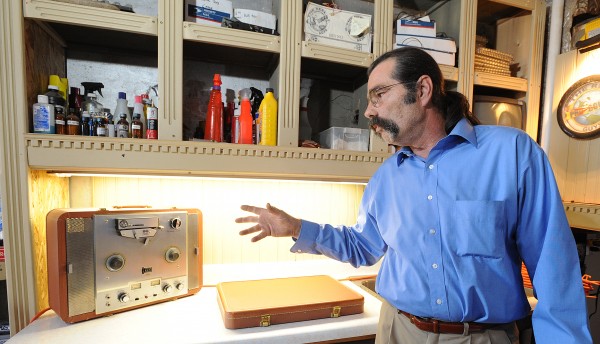 Philip Wilsman shows an early Viking recording machine at his Reel Pro Sound Guys based in Harlowton. It can be found on the web at www.reelprosoundguys.com. 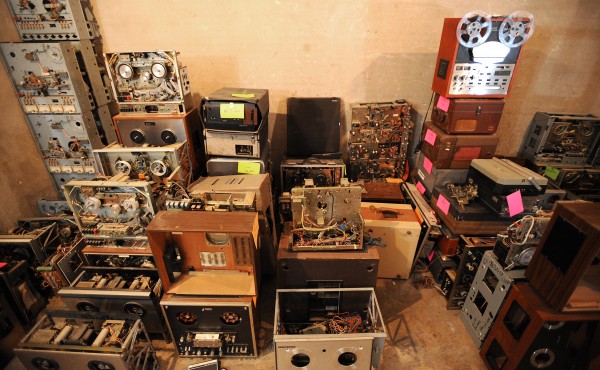 Decks used for parts are stored at Reel Pro Sound Guys, a reel-to-reel tape player repair and parts company based in Harlowton. 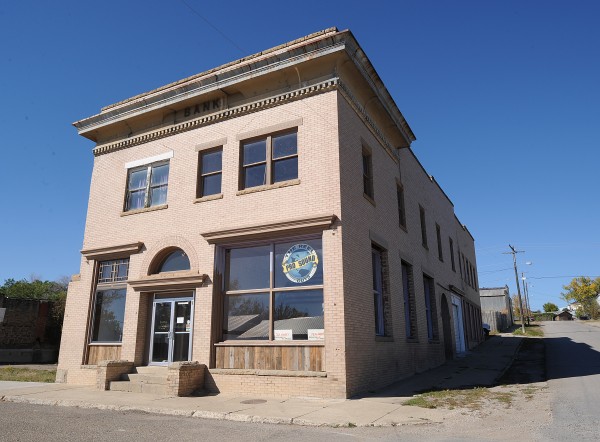 A former bank building in Harlowton is home to Wilsman's business. 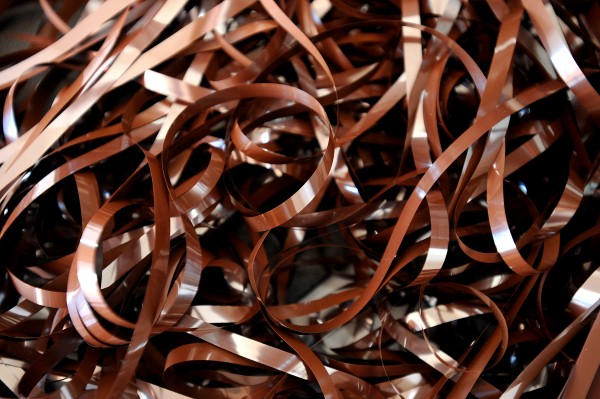 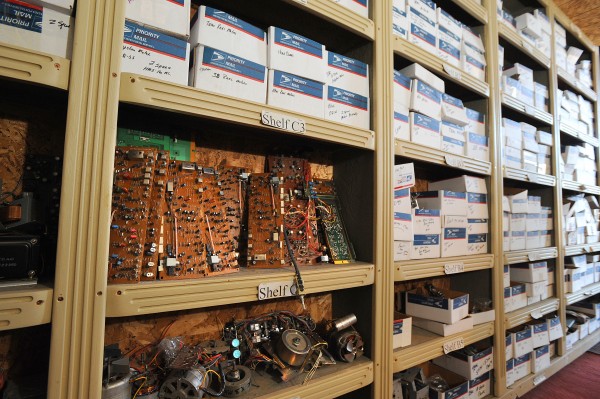 Parts inventory is stored at the reel to reel tape player repair and parts company owned by Philip Wilsman and based in Harlowton. 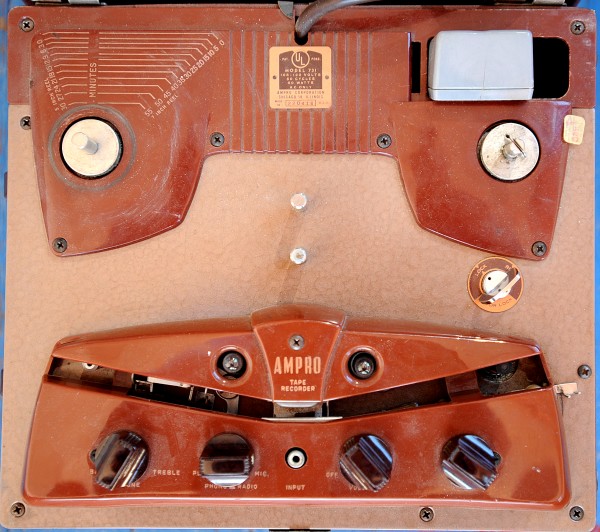 A 1951 Ampro reel to reel tape player is among historic equipment owned by Philip Wilsman based in Harlowton. 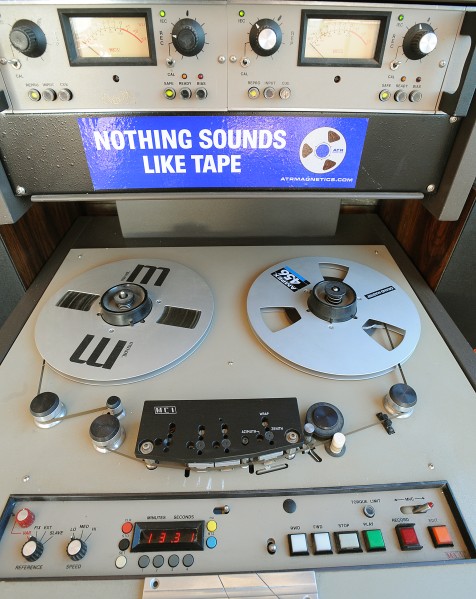 An old tape player bears a sticker that reflects Wilsman's own feelings about the reel-to-reel format. 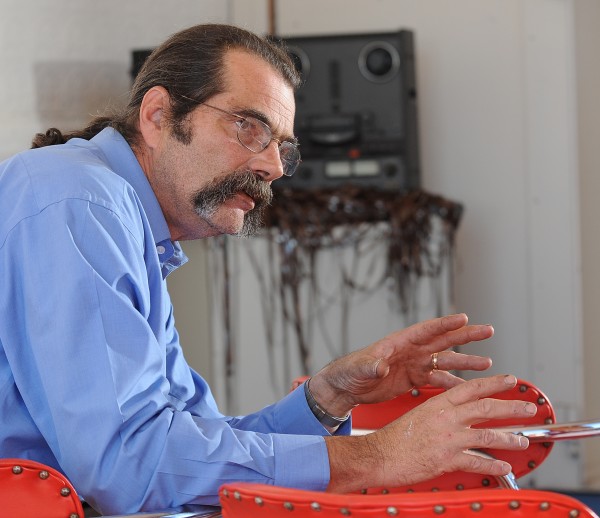 Philip Wilsman is the owner of a reel-to-reel tape player repair and parts company based in Harlowton. The business, Reel Pro Sound Guys, specializes in reel-to-reel units exclusively and can be found on the Internet at www.reelprosoundguys.com.

Not the kind that once walked the Earth, but the open-reel tape recorders that predate CDs and iPods. Not only does he make the monsters roar again, but he's convinced they produce sound with quality that has yet to be beat.

“Everybody thought analog was crap,” he said. “They started chucking them in the garbage. But I could tell the difference.”

As if that concept weren't novel enough, Wilsman and his wife Linda — “We're the two 'guys' in Reel Pro Sound Guys,” he explains — operate the web-based business from an old bank building in Harlowton. The 1908 bank, sporting freshly painted red and blue floors, serves double duty as headquarters for the Wheatland County Tea Party.

But on a sunny afternoon in October, the century-old building was free of political discourse. In its place, the amplified strains of '70s-era country music surged from one of Wilsman's rehabilitated tape decks. More often, he says, it's playing the Beatles or the Doors.

The recorder bore a sticker that read “Nothing Sounds Like Tape.”

“That's what we live on right there,” he said.

A tour of Wilsman's “factory” is a step into another era. Hundreds of cannibalized tape decks — vintage Sonys, Akais, Teacs and others — crowd a back room he's designated as the junkyard.

“There are five major brands and 580 different models,” he said. “We've purchased over 5,000 parts units (old decks) to keep working.”

Further toward the front, Wilsman pauses to point out an open reel-to-reel recorder manufactured in 1954. It was the same model that President Richard Nixon's secretary used to record — and then erase — the infamous 18-minute gap that eventually was a factor Nixon's resignation.

On another wall, the shelves are stuffed with boxes upon boxes of numbered parts.

“Every part is pulled, tested and inventoried,” he said. “I know where every one is.”

It could be said that Wilsman's timing was off. The reel-to-reel format was already on the wane when he fell in love with them in the 1980s. Just a year after he bought out a California dealer, CDs took the nation by storm. But Wilsman persisted, abandoning California in 2004 when real estate prices sent him packing. He bought a big truck and pointed its wheels toward Montana.

“I took two weeks off and looked the state over,” he said. His only prerequisite: to be as far as he could from “California-type folks.”

Wilsman first set up shop in Big Timber, but moved to Harlowton when his lease there evaporated. Crumbling from disrepair, the Harlowton bank building caught his eye. And so did the asking price.

“I got a good deal,” he said. “Obviously, anything compared to California is a good deal.”

By then, Wilsman's timing was right on. The Internet was flourishing, and even Harlowton boasted broadband.

“This business would never have survived if I had a walk-in storefront on a busy street in New York City,” he said. “The Internet brings the whole world right into this store. And when they come, they are here to buy what we offer.”

Now considered an authority in his niche, Wilsman enjoys a brisk business refurbishing old tape decks. He averages 15 a month and a one-month turnaround. He doesn't do spot repairs because he figures when one part goes bad, it's just a matter of time before another follows suit. Instead, he charges a flat rate for full restoration and offers a three-year warranty on his work.

“We wanted a kick-butt warranty to bring customers to us and keep them coming back,” he said.

Coming back? Yes, he explained, half his customers own more than one deck.

But half of them can't afford to have their decks fully refurbished. For them, Wilsman sells parts, along with photocopies of the original owners' manuals.

“”The manufacturers never thought to copyright them,” Wilsman said, smiling.

As might be expected, Wilsman's unique business draws a unique clientele. Eighty-five percent of his customers are Vietnam vets who purchased their tape decks while on tour. They could buy them on base for only a fraction of what they'd pay back home, Wilsman said. They used the machines to record their buddies and their favorite music of the era.

“They sent back (home) all of this high-end equipment they couldn't afford otherwise,” Wilsman said. “They didn't throw them out. It was part of the Vietnam experience. They want to relive that.”

Besides veterans, Reel Pro Sound Guys caters to that rare individual whose family used the reel-to-reel format to record family events. The decks are still popular, too, with artists who record books on tape.

“With reel-to-reel they can go back and edit quicker,” he explained.

A very small group of clients could be considered audiophiles, like the young sound engineer from Missoula who's outfitting his Missoula studio with reel-to-reel equipment.

“It's coming back and in vogue with small recording studios,” Wilsman said.

Whatever their stories, when customers discover Wilsman's Internet site, most are ecstatic. The tape decks and parts are no longer manufactured for retail sale. A few are still made for specialized uses, he said, but “you have to order like a Rolls-Royce.”

Wilsman's stock of parts comes from the tape decks he's collected at garage sales, Goodwill stores, pawnshops and eBay. The latter, he said, was a beautiful source until about 2005, when prices started to climb.

Since moving to Montana, Wilsman's business has doubled in volume each year. Besides trolling eBay for old decks, he relies on eBay auctions to fuel his online activity, which averages 40,000 hits a month. The auctions bring traffic to reelprosoundguys.com and help maintain its high Google ranking.

“When you punch in a part number, our site is always the first,” Wilsman said.

From a dot on the map of Montana, his business touches all corners of the globe. In fact, he says, he ships the largest share of his parts overseas, many to places like Bulgaria and Romania. Maybe, he figures, that's because the technology in Eastern Europe isn't disposable like ours.

Wherever the calls originate, his customers are fascinated by the thought that their parts and troubleshooting advice come from an old bank building in small-town Montana.

“People love it,” Wilsman said. “When I describe this place to them, it's always a positive reaction. They say, 'My God, I wish I were there with you.'”

How to get the best Walmart Black Friday 2021 deals

Walmart is rolling out three sales events with its second annual "Black Friday Deals for Days."

Strategic Retirement Plans welcomes Kaelen Shay as a new hire. He has passed four CPA tests and passed his series-65 test, putting him on trac…

Building your credit: Myths and reality

Also, check out more of this week's best personal finance tips from experts, including a look at what's new for Medicare open enrollment.

Bitcoin and the world of cryptocurrencies, explained

Bitcoin surged above $66,000 for the first time on Wednesday. But what is Bitcoin? Here are answers to 10 of the most pressing questions many people have about cryptocurrencies.

Here are the improvements that have been made so far. Also, check out more of the week's best money tips from experts.

More than 10,000 Deere & Co. workers went on strike Thursday, the first major walkout at the agricultural machinery giant in more than three decades.

Philip Wilsman shows an early Viking recording machine at his Reel Pro Sound Guys based in Harlowton. It can be found on the web at www.reelprosoundguys.com.

Decks used for parts are stored at Reel Pro Sound Guys, a reel-to-reel tape player repair and parts company based in Harlowton.

A former bank building in Harlowton is home to Wilsman's business.

Parts inventory is stored at the reel to reel tape player repair and parts company owned by Philip Wilsman and based in Harlowton.

A 1951 Ampro reel to reel tape player is among historic equipment owned by Philip Wilsman based in Harlowton.

An old tape player bears a sticker that reflects Wilsman's own feelings about the reel-to-reel format.

Philip Wilsman is the owner of a reel-to-reel tape player repair and parts company based in Harlowton. The business, Reel Pro Sound Guys, specializes in reel-to-reel units exclusively and can be found on the Internet at www.reelprosoundguys.com.