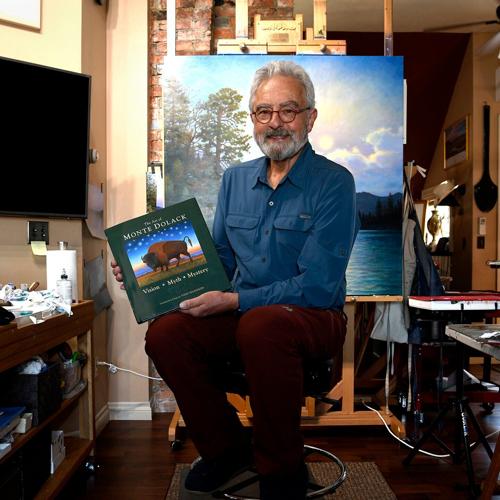 Monte Dolack sits in his studio with his new book, "The Art of Monte Dolack: Vision, Myth, Mystery.” 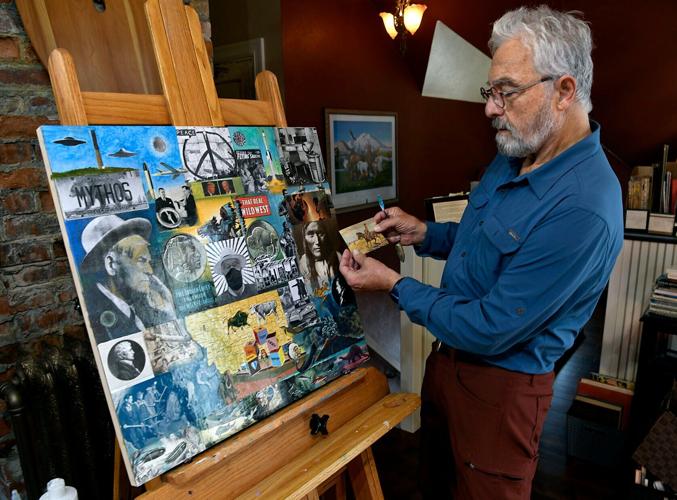 Monte Dolack works on a collage piece in his studio recently. 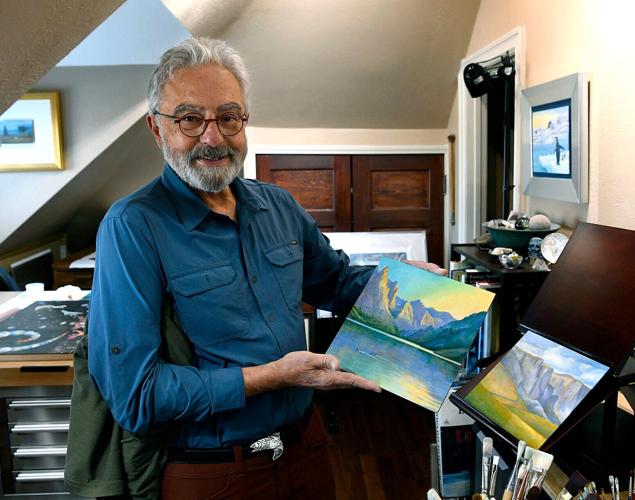 Dolack holds a painting of East Rosebud Lake that he's been working on in his studio. 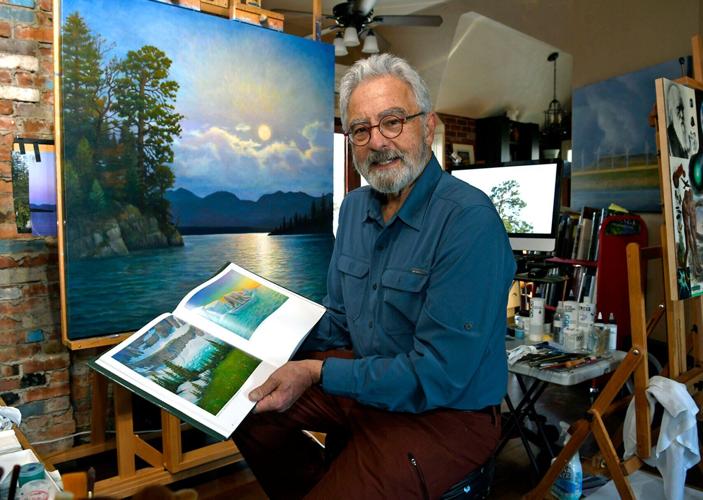 Dolack sits in his studio with his new book, "The Art of Monte Dolack: Vision, Myth, Mystery.” 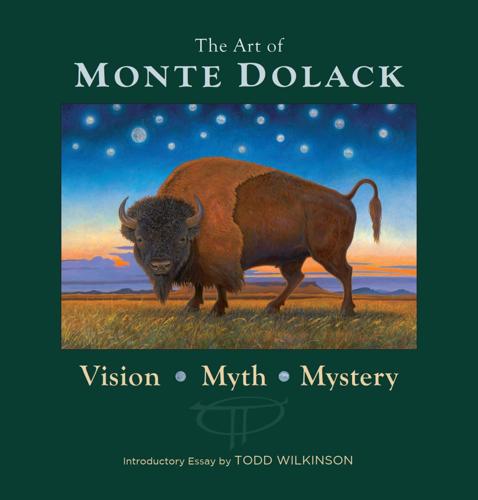 Monte Dolack’s new book collects paintings by the artist stretching back decades. Years in the making, the pandemic delayed plans, yet he continued to produce new canvases that landed within its covers.

“Originally, I wanted to do something that had most of the work from the last 20 years,” he said. “And then it wound up being closer to 22 years.”

“The Art Monte Dolack: Vision, Myth, Mystery” includes many paintings, both self-generated and commissioned, that viewers might not have seen before, even if they’re hard-core fans of his posters.

He’s been honed in on landscapes lately, though a trip to the Venice Biennale last year provided a shot of energy to pursue some new ideas and forms.

“I came back so fired up, I started a new body of work,” he said.

‘Somewhat of a sequel’

The book was published by the University of Montana Press as a hard cover, clocking in at almost 200 pages, with full-color reproductions of his paintings. One of the editors is Gerald Fetz, the press’ former director and a retired UM professor; the other is Mary Dolack, the artist’s spouse, who designed the layout.

The tome was originally planned for release in 2020, when the Montana Museum of Art & Culture was exhibiting “Monte Dolack: The Artist’s Nature,” a show that emphasized his depiction of the landscape and animal life, from early poster work to present-day personal paintings.

For those who want a deep dive on Dolack, the book opens with a career-surveying essay written by Todd Wilkinson, the founder of Mountain Journal. He’s written for National Geographic and the Washington Post, and authored several books. While generously sharing space with full-color plates, the essay stretches out over 32 pages and clocks in among the longest writings on Dolack you could find.

Wilkinson interviewed the artist and included insights from E.O. Wilson, Russell Chatham, Thomas McGuane and Ted Turner. He covers Dolack’s life and artistic path — his youth in Great Falls, where his father worked at a smelter owned by the Anaconda Copper Co. Dolack did, too, during the summers when he was younger, and they were formative. At UM, he studied under influential Montana modernists like ceramicist Rudy Autio and sculptor/painter Ted Waddell, and drew cartoons for the Montana Kaimin. He set up shop in downtown Missoula, designing posters from a studio above the Top Hat. It covers the life he built with his wife, the artist Mary Beth Percival, and the decline in her health before her death in 2016.

Wilkinson explores the environmental concerns that suffuse Dollack’s art, whether it’s the details in a painting or the significance of a cause that he lent his hand to in the form of a poster or license plate. This being Dolack, the writer also delves into issues that surround regionalism, humor and accessibility in art.

The book is something of a sequel. In 2000, he released “Monte Dolack: The Works.” It surveyed the ground laid between the 1970s beginnings to the century’s end, with an introduction by Annick Smith. The new book, aside from historical artwork for context, dedicates its plates, numbering more than 160, from 2000 to 2022. Rather than chronological order, Mary Dolack, who designed the book, suggested that they divide them by theme. Some are natural elements, like “water,” “fire” and “air.” For the surreal, see the “beyond” chapter. “Home” includes domestic scenes and Montana as a whole, whether a view from the North Hills or a scene in Glacier. “Abroad” includes work from Dolack’s travels, including pilgrimages to Europe to see masterpieces; or to Antarctica, to see the continent and the effects of the climate crisis first-hand.

“My underlying theme in many pieces is caring for the planet and the animals, to try to preserve the environment and be aware of it, so I wanted to go see what was happening,” he said.

“It’s changing fast … global warming is real, it’s not a theory,” he said.

Looking at a painting of penguins on icebergs near the shore, he pointed out the dynamics of the environment, like the exposed rock of the mountains.

“This is very close to where Shackleton wound up stuck in the ice,” he said.

“Travels” also includes a portrait of a Sheltie lying on a grassy field near Stonehenge, with a rainbow landing in the far treeline. It’s called “Braveheart,” which was the name of the dog, who belonged to Mary when they first met. They have two Shelties now, puppies they bought during the pandemic.

Early in the pandemic, the Dolacks moved into a new home: the 1903 mansion designed by renowned local architect A.J. Gibson. Originally built on Gerald Avenue, in 1979 it was moved to 39th Street, just off Southwest Higgins Avenue. The previous owners, Tom and Nancy Malikie, renovated and preserved it, operating it as a bed and breakfast.

The top floor, which the Malikies renovated into a living quarters, is now Dolack’s studio. The gabled roof somewhat disguises the amount of space. Look out a window to the south, and you can see the line of poplars on the property. To the north, you can see the peaks of the Rattlesnake. It’s a panoramic view of the mountains just above the neighborhood where he lived for long stretches of his life.

“There’s times where I’m looking out the window and it is so good I have to run downstairs to get my car, drive up to the top of Whitaker and take photos,” he said.

He paints on a Hughes Easel Model 4000, which allows him to move a large (and heavy) canvas up, down or to either side. It spares him from having to work off of a step stool or a ladder. To his left is a large flat-screen TV and to his right, a large desktop Mac. He pulls up reference photos on them.

He has a few revolving book stands, designed by Thomas Jefferson for multi-tasking on books.

He uses them for small studies on aluminum, testing out ideas and seeing which one will advance to the bigger canvas.

His studio is stocked with books on artists — Impressionists along with Kehinde Wiley and Chuck Close. Dolack calls himself an “amateur naturalist” since he was a kid — another set of books includes references: “The Human Figure,” “Early Man,” “Roman Mythology.”

Those sources have helped feed his recent new direction in collages. He’s worked in this vein before, and he points to a drawing from 1984 that was inspired by Robert Rauschenberg.

He said these new ones “have to do with life and death and religion and humor and how we define ourselves as human beings on this planet in the universe.”

One piece, with images sourced from books and magazines and photographs, spans human history and development, particularly in the West. It includes a black and white portrait of one of his heroes, Charlie Russell, in profile, references to dinosaurs, miners (his grandfather was a miner), loggers, Biden, Trump, the Blackfeet, a “Greetings from Montana” logo and the Missoula “Peace” sign from the North Hills. There’s a UFO, which may seem conspiratorial, but it’s autobiographical: There was an alleged sighting in Great Falls, and when he was a kid they’d go outside and hope for a glimpse.

“These are going someplace, they’re just evolving,” he said. He’s thinking about photographing them, reproducing them at twice the scale and then painting over them.

“That’s the fun part about just doing creative stuff versus when you’re doing a commission and you’ve got a target and a deadline.”

His latest project might have seemed like science fiction decades ago. Similar to the structures on the Flathead Indian Reservation, there’s a plan underway to build a wildlife crossing outside of Los Angeles. The Wallis Annenberg Wildlife Crossing will span all of U.S. Highway 101. At 10 lanes wide, it will be the largest in the country.

He’s working with the National Wildlife Federation, one of many groups involved in the public-private partnership. He’s going to go down there in February to see it first-hand.

“This will be this amazing bridge, and it connects to two major wild places,” he said with excitement.

“I’m just learning about it myself.”

Keke Palmer "set the record straight" on speculation she is expecting her first child as she hosted 'Saturday Night Live' for the first time. Here's that and more celeb news.

Nearly everyone who runs for federal office campaigns on the notion that Washington is broken. Year after year that message continues to reson…

A pair of explosions rocked a sober living house at 2042 Green Terrace Drive.

Billings police on the scene of a double shooting at the Treasure Cove Casino at 909 South 32nd Street West Sunday night.

The Blain family announced on Monday that its annual flight of a lighted Santa and sleigh with reindeer will be retired this year.

Billings police are on the scene of a suspicious death at the Briar Patch Apartments Monday evening.

“The victim is fighting for her life after suffering head injuries,” Yellowstone County Attorney Hallie Bishop said before requesting Kovach’s bond be set at $150,000.

A man is facing an assault charge after allegedly opening fire in the parking lot of a Billings restaurant.

Lights, camera, blood...The Gazette has its moment in new movie being filmed in Billings

A Billings man was found dead Tuesday evening, with police launching at least their second homicide investigation this week.

Monte Dolack sits in his studio with his new book, "The Art of Monte Dolack: Vision, Myth, Mystery.”

Monte Dolack works on a collage piece in his studio recently.

Dolack holds a painting of East Rosebud Lake that he's been working on in his studio.

Dolack sits in his studio with his new book, "The Art of Monte Dolack: Vision, Myth, Mystery.”