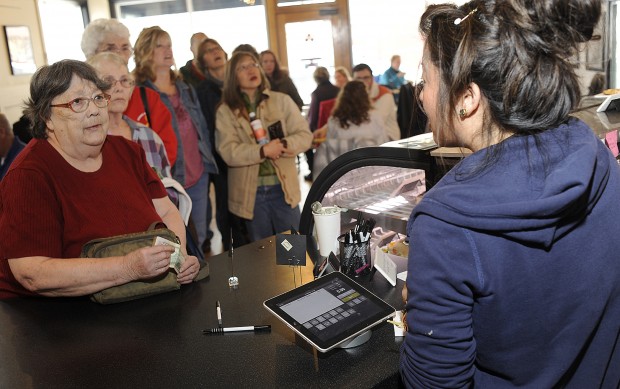 Dana Millikan, an employee at Harper & Madison at 10th Avenue North, uses an iPad to ring up customer orders. The cafe and bakery uses the Apple device instead of a cash register. 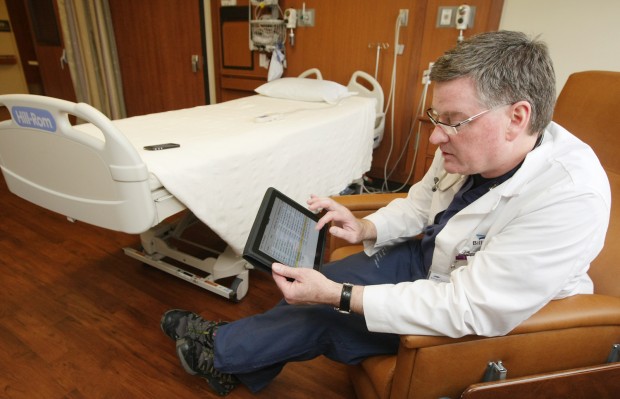 Dr. Dennis Regan shows how he uses an Apple iPad at Billings Clinic. Many physicians at the hospital and clinic use an iPad to check patient records and look up medical information. 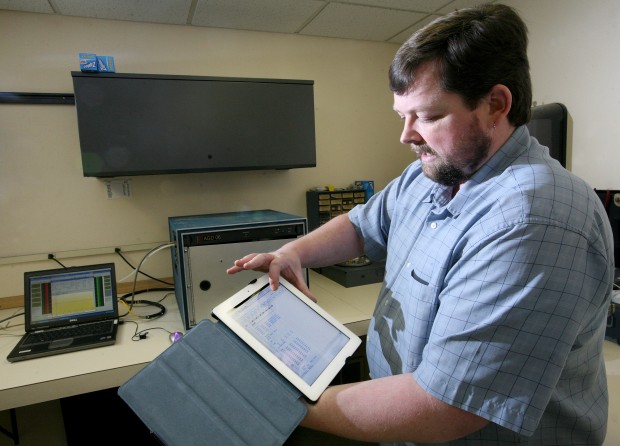 Anthony Wain, a system support engineer with Noram Wellsite Services, demonstrates some of the company's uses for an iPad.

﻿With a flick of the wrist and a quick swipe of a finger, employees at the Harper & Madison café and bakery can take your lunch order, ring it up with cash or credit card and calculate your change, all in the matter of a few seconds and without pushing a single button.

Owners Lloyd and Jonie Swords trained their 10 employees how to do so in a matter of minutes.

The recently opened Harper & Madison, 3115 10th Ave. N., uses Apple’s iPad — a small touch-screen tablet computer about the size of a piece of paper and thinner than a deck of cards — as its cash register, complete with a credit card reader that connects through a wireless network.

“It’s just that intuitive and very, very easy to use,” Lloyd Swords said.

By March, iPad sales had topped 15 million since its April 2010 introduction, Apple CEO Steve Jobs said in a press release earlier this year. Analysts predict those numbers could double by the end of 2011 and triple in 2012.

“I can definitely see the potential for this getting huge,” said Shelli Mann, manager of the Boothill Inn.

She uses an iPad to give visual presentations to potential customers, take notes, access email and track guest flights to time shuttles to the airport.

While it’s largely a consumer product used for entertainment, games and news, the iPad has intrigued businesses because of its portability, connectivity, ease of use and the wide range of programs, called apps, that it offers.

“It’s not like, ‘Oh wow! I can do things I could never do before,’ “ he said. “It just makes certain workflows so much easier.”

The health care industry is one of the top adopters of tablet computers because of their patient education potential and ease of access to records. Regan uses one daily, although it’s not an official hospital device.

He uses his iPad to access patient records on the go — instead of stopping at a workstation with a laptop — and to check daily calendars and schedules.

For example, he’ll access Billings Clinic’s records database via a wireless connection to view a patient’s urinalysis results. If he notices something off, Regan can quickly put in an order for more medication or use a separate app to dig through extensive online medical libraries and services to solve the problem.

About 100 of the hospital’s 300 physicians use a mobile device — either a smartphone or tablet computer. Roughly 100 of its administrative staff do the same.

As the hospital plans out its yearly budget, Regan hopes officials will approve money to develop an iPad- and smartphone-friendly version of its software.

Other businesses agree with Regan that iPads don’t necessarily fill a specific void but do streamline operations.

“There’s definitely things I can’t do with this,” said Anthony Wain, systems support engineer for Noram Wellsite Services, who uses one of the company’s four iPads daily for work. “But the tech support aspect is just incredible.”

Some of the iPad’s drawbacks include a lack of support for Flash video — a widely-used format for Internet videos — less memory than traditional laptops and lack of a built-in, nontouch-screen keyboard.

However, since devices like iPads are built around using Internet connections, much of that is solved through the use of cloud computing, which involves storing data and systems on remote servers accessible through the Internet.

At Noram, which deals with gas detection and chromatography equipment for the oil and gas industry, Wain, using a remote PC app, can access their system from anywhere to deal with problems at sites hundreds of miles away, as long as there’s an Internet connection.

“If I get a call at 1 a.m. for a problem, I can roll over, grab the iPad, check out the technical aspects and problems and fix it, usually in just a few minutes, all without having to get out of bed,” he said. “It’s reduced the number of our call-ins and our response time.”

Jacque Lorang is a Realtor and broker with Billings Real Estate Professionals who uses her iPad for presentations to clients, reading documents and comparing prices and neighborhood mapping.

“I see it as a complement to what I already have,” she said. “I definitely see it becoming more usable, and there’s always a ‘What’s that?’ from people when they first see it.”

With the number of public and specially designed apps growing, more and more businesses are looking at using iPads.

Apple is so confident in their potential that it created a section of its website specifically for the use of iPads in business with details on useful apps, integration and use tips.

“I’ve found a lot of uses,” Mann said. “I don’t print out any paper anymore. I take notes, and I rarely use my laptop anymore. It’s just so much handier.”

Dumb mistakes you can avoid when investing

McDonald's Teams Up With Biden Admin To Promote COVID Vaccinations

McDonald's Teams Up With Biden Admin To Promote COVID Vaccinations

How you can create a steady income for retirement

How you can create a steady income for retirement

Why you should shop small and support local businesses

Why you should shop small and support local businesses

How to fill in your financial blind spots

Also, check out more of the week's best financial tips from experts at NerdWallet, Forbes and the Motley Fool.

Montana State University Billings is pleased to announce Sep Eskandari, Ph.D., has been selected as provost and vice chancellor for academic a…

CLEMMONS, N.C. (AP) — The nation's largest fuel pipeline restarted operations Wednesday, days after it was forced to shut down by a gang of hackers.

Why Retirees Are Losing Ground on Social Security

You need to prepare for your benefits to provide less buying power.

How shopping small makes a big impact in your community

According to the U.S. Small Business Administration, when you spend $100 at a small business, $48 stays in the community. Spend the same $100 at a national retailer and only $14 stays.

Dana Millikan, an employee at Harper & Madison at 10th Avenue North, uses an iPad to ring up customer orders. The cafe and bakery uses the Apple device instead of a cash register.

Dr. Dennis Regan shows how he uses an Apple iPad at Billings Clinic. Many physicians at the hospital and clinic use an iPad to check patient records and look up medical information.

Anthony Wain, a system support engineer with Noram Wellsite Services, demonstrates some of the company's uses for an iPad.
© Copyright 2021 Billings Gazette, 401 N Broadway Billings, MT | Terms of Use | Privacy Policy
Powered by BLOX Content Management System from TownNews.com.
You don't have any notifications.