Farmers in the Platte River Valley affected by an irrigation tunnel collapse are beginning to lose hope that their crops will be salvageable this year.

The tunnel is part of an irrigation system that spans more than 100 miles between Wyoming and Nebraska, beginning at the Guernsey Reservoir and ending in Gering, Nebraska.

A tunnel near the beginning of the system collapsed in the middle of the night July 17, blocking water from moving through the system and washing out 500 yards of a canal bank upstream from the collapse.

More than 100,000 acres of crops, divided between more than 700 farms across both states have been without water for the last month, and best estimates say water won’t be restored for at least another two weeks.

“At this point, most of our water users have settled into the fact that even if we get that water to them, it’ll be too late,” said Rick Preston, manager of the Gering-Ft. Laramie Irrigation District, which serves more than 50,000 acres currently without water in Nebraska.

Yields on corn will probably be “nil to nothing,” Preston said, but sugar beets could be salvageable because their root system digs deeper than other crops. Still, without the surface water, even those may not grow large enough to harvest, he said.

Xin Qiao, an irrigation management specialist at the University of Nebraska Lincoln’s Panhandle Research and Extension Center, is also predicting significant crop loss from the situation.

In a document published July 29, Qiao predicted 100 percent corn loss, 50-60 percent sugar beet loss and around 90 percent dry bean loss by the week of Aug. 7. Though, because of recent rain, he said the loss likely is not yet that severe.

“Even a little bit of water is going to help,” he said.

Qiao said the Panhandle Research and Extension Center should have updated yield loss predictions once it’s clear when or if water will be restored, which Qiao said he should know by the end of the week.

Robert Coxbill, board chairman of the Goshen Irrigation District, which serves 400 farms in Wyoming without water because of the collapse, said he’s unsure when water will be restored, but it doesn’t seem to be soon.

“It’s not looking good for this season,” he said. “It just ain’t going to happen in two weeks unless you have some kind of miracle.”

A U.S. Department of Agriculture spokesperson told the Star-Tribune on Wednesday that the Department was still working with local, state and federal agencies to determine whether crops would be covered under the federal program.

Last month, a USDA spokesperson said the cause would have to be weather-related for the crops to be covered.

Current speculations are that a void behind the concrete tunnel lining formed from water leakage or over-excavation during the tunnel’s original construction in 1917, according to an engineer’s report submitted to Wyoming’s Office of State Lands and Investments.

But that does not mean weather was not a culprit. Precipitation in the Platte River Valley has been 200 to 300 percent above normal for the past year, according to the National Weather Service, and many believe that could have also contributed to the tunnel failure.

Still, no official cause can be determined until the hundreds of feet of dirt and debris still in the tunnel can be cleared.

After the tunnel collapsed, the irrigation districts scrambled to find a plan for an emergency repair to the structure and the washed-out canal bank. Repairs to the canal bank are almost entirely finished, Coxbill said.

It took longer to begin repairs on the tunnel, but after a few false starts progress is being made there as well. A crew from Missouri-based SAK Construction is now working to shore up the tunnel walls and clear debris from the tunnel.

When the tunnel collapsed, it opened a sinkhole 150 feet wide and 50 feet deep in the ground above the tunnel. The tunnel itself is about 100 feet underground. When crews were able to get inside the tunnel, they realized there were two separate cave-ins about 50 feet apart. So far, the crew has repaired the first cave-in and are working on the second.

The price tag on the repairs are significant. Early estimates were around $3 million just for the short-term fix, but Coxbill expects it to be more than that.

“By this weekend we’ll have spent about $4 million,” he said.

The Bureau of Reclamation built the tunnel in 1917 as part of the first expansive reclamation project across the West. In 1926, the Bureau signed an operation and maintenance agreement with both the Goshen and Gering-Ft. Laramie Irrigation Districts, leaving the day-to-day tasks of the system to those districts.

Some have said the Bureau has an obligation to help fund the repairs because it still owns the tunnels in the system. State Sen. Cheri Steinmetz, who represents Goshen County in the Wyoming Legislature, is among those who believe the Bureau has some liability.

“Do we have some legal liability? No,” Jay Dallman, a spokesman for the Bureau said, invoking the 1926 agreement. “Technically speaking, the liability resides with the (irrigation) districts.”

He said that does not mean the Bureau would not help. Earlier this month, the Bureau gave the districts a $4 million loan to cover the costs of the emergency repair. Dallman said he did not know if the Bureau would offer additional money.

The Goshen Irrigation District also submitted an application to Wyoming’s State Loan and Investment Board on July 27 as a “special district” hoping for $3,197,180 from the Mineral Royalty Grant fund to pay for the emergency tunnel and canal repair.

Wyoming’s Office of State Lands and Investments has, however, offered to work with the irrigation district to find a funding source it qualifies for. The Clean Water State Revolving Fund and the Joint Powers Act have both been floated as possibilities.

They are also recommending the deadlines for submitting those applications be waived for the district so it has time to submit applications for those other funds. But that money would go toward the emergency repair, not toward a more permanent solution.

Preston said the districts were considering inserting a fiberglass sleeve 13 feet in diameter into the tunnel and running water through that. A similar idea was nixed when discussing the short-term repair because it was too costly and wouldn’t move enough water. Engineers are now looking at if the fiberglass pipe would carry enough water. Preston said this idea could be feasible, but costly. He said the fiberglass pipe isn’t even manufactured in the U.S., and would need to be shipped from Turkey.

He said the shipping costs alone were quoted at $2 million. Whatever the districts decide, Preston said both Wyoming and Nebraska will have to pitch in money for the repair, “otherwise we’re going to be dead in the water.”

State and federal representatives have been involved in finding a solution. Both Wyoming and Nebraska declared a state of emergency after the collapse, and Sen. John Barasso was in Torrington on Monday to speak with local officials.

“So much work has been done in the past three weeks, and there is still much to do,” Barrasso said in a statement to the Star-Tribune. “The Bureau of Reclamation has provided up to $4 million in emergency loan funding to help with the short-term response. I will continue to work with Governor Gordon, the irrigation district and the Bureau of Reclamation to ensure the community has the resources needed to complete the reconstruction process.”

The state, meanwhile, is still unclear on what comes next.

“It’s really tough on this one,” said Sen. Ogden Driskill, R-Devils Tower, and a member of the Legislature’s Select Committee on Water. “We have a few states and a few irrigation districts involved. The Bureau of Reclamation still owns the facilities that the irrigation districts are apparently responsible for, nobody knows for sure what happens in an emergency, and it’s just tragic. Crops are dying as we’re trying to figure out the specifics.”

At its meeting Wednesday in Buffalo, the Select Water Committee voted to draft a bill ahead of the 2020 Legislative Session to create an emergency account to set aside money to rapidly respond to similar emergencies in the future. Expected to be modeled in a similar fashion to the state’s existing fire suppression account, the fund — anticipated to maintain a balance of $5 million — will likely be funded by user fees, and would ideally be used to meet the immediate needs for communities impacted by sudden infrastructure failures — like Goshen County’s and in places like Sundance, where the collapse of a water tank led to a spike in residents’ water bills that Driskill said will affect the city budget.

“These things keep happening, and we need to find a mechanism to be able to reach in and try and help in these emergency situations,” Driskill said.

Driskill said the fund would likely be self-funded and fee-based, either with a slight increase in the fees already paid to irrigation districts or by levying an acreage-based fee. As it stands, Goshen Irrigation District has already raised water rates for its users. Gering-Ft. Laramie is waiting to raise rates until the full cost of repairs is known.

Though it’s too early to discuss specifics, the key to the fund’s success, Driskill said, will be in ensuring that the fund can only be accessed in emergency situations.

The bill draft could be introduced at the committee’s next meeting in November, and Driskill said some additional funds could be included in the omnibus water bill introduced as part of the state’s 2020 budget this autumn.

While the full impact is still unknown, and likely won’t be until farmers attempt to harvest their crops, the Goshen County community has come together to help pay some of the mounting costs of the canal repair.

A fund at Torrington’s First State Bank has reached more than $20,000, the bank’s branch president Kelly Sittner said. The Wyoming Farm Bureau Federation donated $10,000, and all of Torrington’s local banks also worked together to donate another $10,000.

The Goshen Irrigation District is posting weekly updates on the repairs to its website and Facebook page.

The culvert that washed out from under a highway on the Standing Rock Reservation on July 9, killing two South Dakota residents when they drove into the chasm, had been identified for replacement seven years ago.

One of two people who died after driving into a washed-out section of highway on the Standing Rock Sioux Reservation was going south and about to end a shift on a daily mail route. The other was going north and about to start a shift as a nurse.

Let’s just call that Sunday night hail storm what it was — a beet down. 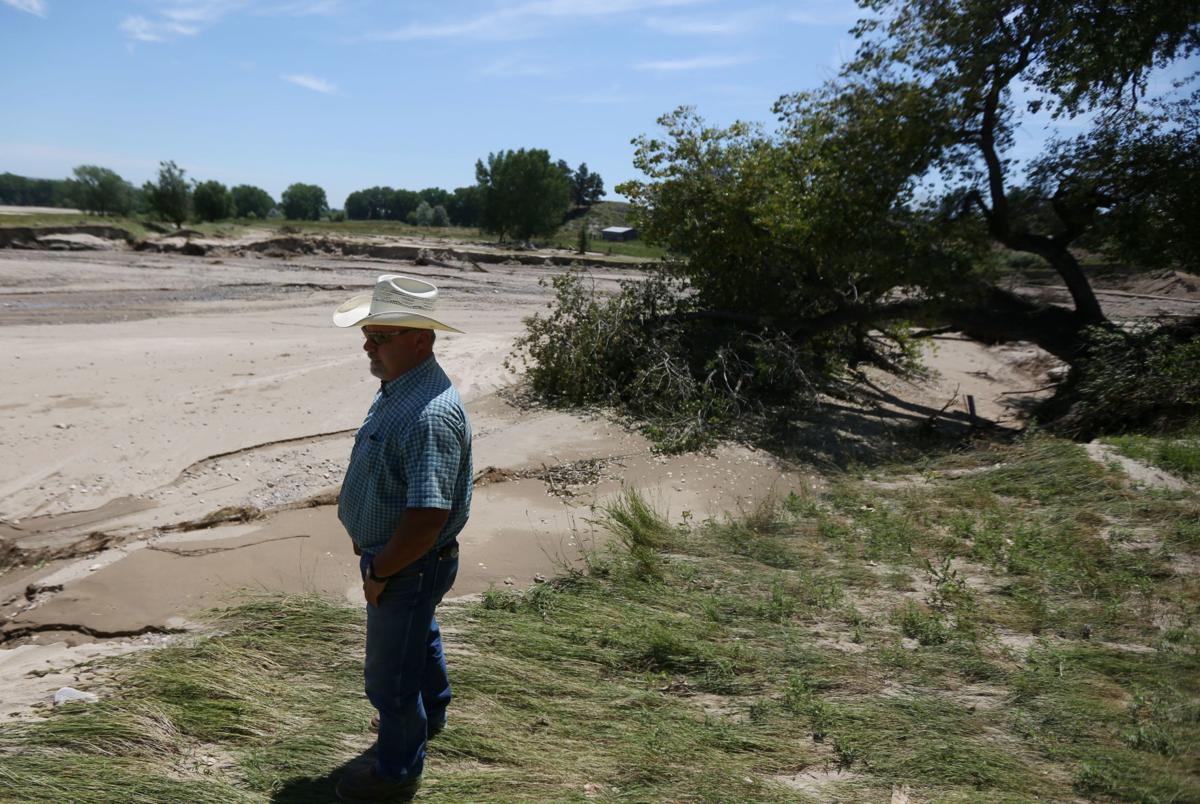 Farmer Buz Oliver stands on the precipice of eroded land caused by the flooding from the canal break on July 24 in Fort Laramie. The flooding destroyed several acres of crops in the initial flooding. 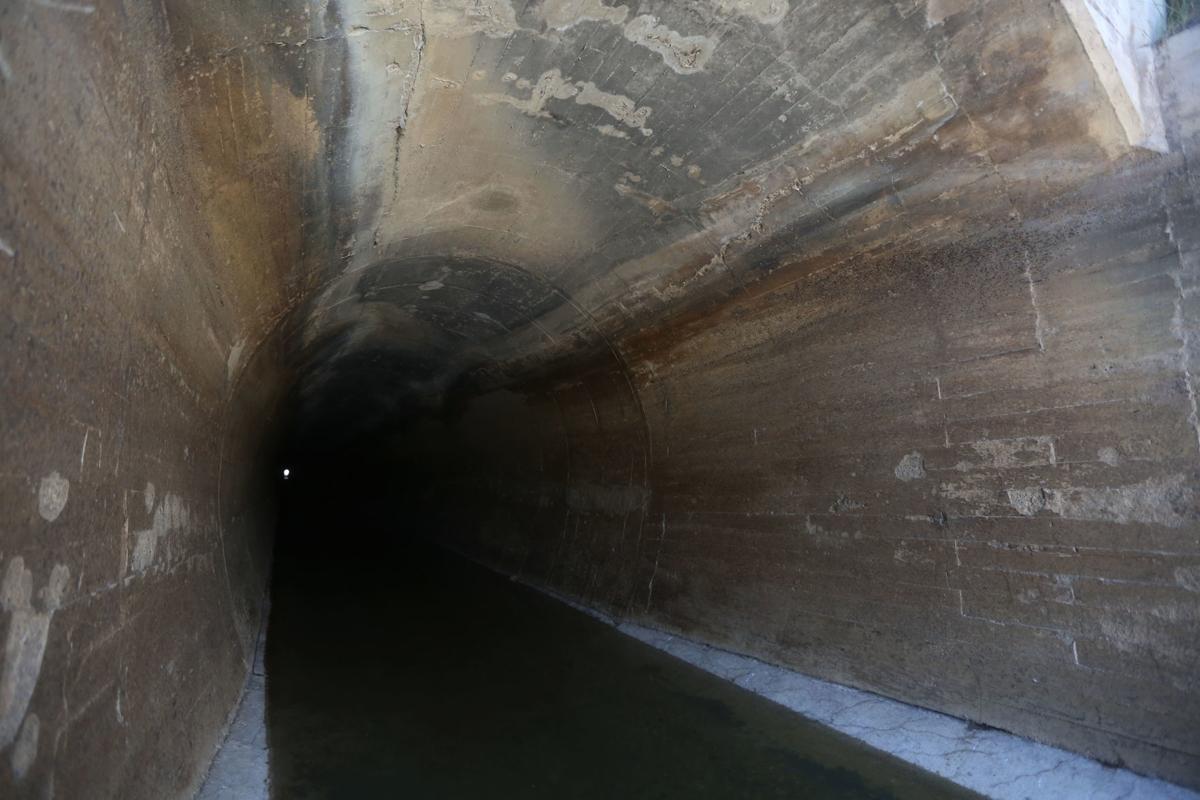 An intact irrigation canal west of the collapsed canal is empty of shut-off water in Fort Laramie. 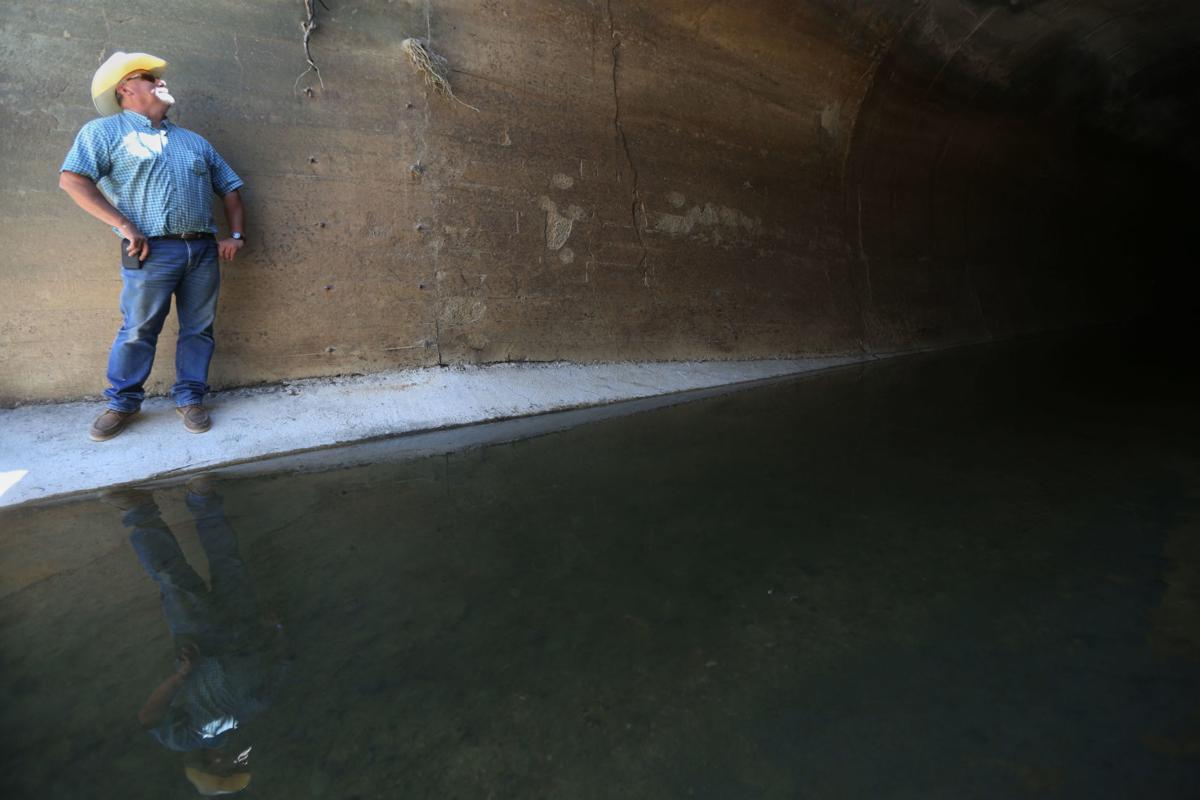 Farmer Buz Oliver stands at the mouth of an intact tunnel for the irrigation canal in Fort Laramie. Farmers along the canal require the use of its water for crop irrigation, but the water has been shut off until the collapsed canal can be fixed.