“What the heck is it?” Dorothy “Dot” Henke calls out to her husband, retired farmer Randy, in the snowbirds’ Arizona home earlier this month, when asked the brands of her appliances. “They’re probably just Maytag. I’m not into that (appliance brands). If it works, I’m happy."

It’s been 10 years since Henke, 64, first tinkered around in the kitchen of her rural Velva home, amending a butter spindle discovered at a wedding reception in nearby Max. Her resulting concoction — the need-to-hide-the-bag-they’re-so-good Dot’s Homestyle Pretzels — are now stuffed in glove compartments of F150s, garnish tailgate parties, and line care-packages sent to North Dakotans around the country. They’re carried nationwide in hardware stores, and in 2020 the company will add a “Southwest-style” rendition to the litany of spin-off products, including a candy bar (“Mr. Dot” named for Randy) and seasoning rub for meats and fish.———

But the woman behind Velva-based company, isn’t done experimenting, chasing the next, head-turning flavor.

“My thing is, I want to be unique,” Henke told Forum News Service earlier this month. The mother of three and grandmother of one talks with a breezy north-country drawl, jumping quickly from topics like hands flicking seasoning onto a pan of baked good ready to be whisked into the oven. “I don’t want to be following the other people. Snyder’s has a mustard. Do I want to follow that? I just don’t know. I got dill. A lot of people got dill. … But I want to be unique. I want to be me.”

For the past decade, Henke has been herself — or, at least her products have carried her name. Matriculated from a treat baked and bagged in the kitchen adjacent the Velva grocery store, Dot’s Homestyle is now sold in True Value stores in every state in the nation. According to Nielsen data, Dot’s ranked sixth on the list of highest-selling pretzels in 2019 (up there with pantry standards, like Rold Gold and Snyder’s of Hanover).

Sometimes the job can take her into other ethereal realms seldom dreamed of by the do-it-yourself foodie — like, discussing what to put on the bags.

“I didn’t want a shake-n-bake,” said Henke, recalling when she and a marketing team tried to figure out how to label her seasoning rub, which, like all her products, she speaks in the first person. “I’m not a shake-n-bake, you know, and I don’t want to be known about as a shake-n-bake.”

(Henke can be persuasive. Marketers eventually settled on “crumble.”)

Sometimes, too, the job can attract unsolicited advice from neighbors and friends, as when she tried (and tried again) on her Southwest-style, scheduled to hit retail shelves this spring.

“I can’t count how many different products I tried that I bought or people sent to me, saying, ‘Try this’ or ‘Try that,’” said Henke. “My god, you would laugh at my book [of attempted recipes]. I hate saying they’re failures, but they were.”

And as many at the top, she’s even had to reckon with imitators.

“I’ve had umpteen of them trying to copy me, and that’s very flattering,” said Henke, “But I still go in my own direction with my own flavors, mixing it up in your mouth, so that you don’t know what’s in there.”

But there is a certain whimsy and plain-old fun in Henke’s approach to her second career (she worked as a financial assistant for 30 years prior to her “retirement” and stumbling into the pretzel business).

Like other maestros who seem to enjoy what they’re doing, Monet with painting water lilies or Steph Curry with jump shots, Henke finds inspiration in the kitchen with playful, almost-accidental creativity.

It’s a process she learned from her mom on the farm outside Wahpeton.

“It was always ‘a pinch of this’ and ‘a pinch of that,” recalled Henke, who assisted her mom (“she liked to boss me around, but I didn’t mind it”) cooking for big Thanksgiving dinners with 50, 60 people. “That’s kind of the way and the heck we cooked all our gatherings.”

Back home in Velva, her adopted hometown has benefited, too, from Henke’s culinary experimentation. The plant where workers season, oil, and bake the spindles employs over 70 people — up from 25 just over a year ago. The town even is starting to get name recognition and plans to erect a sign outside town welcoming visitors to the birthplace of Dot’s.

“They’re (Dot’s) either the biggest employer in town or knocking on the door,” says Randy Hauck, chairman of the Velva Community Development Corporation. He ticks off the school, the 50-bed nursing home, the electric cooperative he works for, and the canola crushing plant as job creators in Velva (population 1,084), noting how lucky the town is with Dot’s plant.

“If those people didn’t work in Velva, they’d be working in Minot,” Hauck said.

Growth will likely continue. After securing a pretzel manufacturer in Indiana, the company can start filling more pallets of orders. The relationship with True Value has also brought the company name recognition.

“Since adding them (Dot’s Homestyle) eight months ago, it has been one of the fastest growing snack items for True Value,” said Jennifer Born, a spokeswoman for True Value.

Dot’s officials say bigger names are starting to knock on the door everyday.

“I have to say ‘no’ to almost every customer instead of ‘yes,” said Tate Howe, Dot’s marketing manager, who is based in suburban Kansas City. “It’s always a balancing act…do we have enough supply?”

But as the product spreads, so does one nagging question: just what is in Dot’s Homestyle Pretzels to make them so irresistible? Not since Lawrence Welk have the vaguely midwestern flavors of a North Dakotan artist been so addicting.

Henke herself is coy, saying the pretzels she encountered in Max were “too spicy” and “made you want to drink a lot of beer.” “I mean, you name it, they had so much stuff in it,” said Henke, “but it was really spicy I thought ‘Gosh dang it, I really like that butter spindle even though it was too hot for me,’ so I thought, ‘I’m going to tinker around with that and see if I can get a flavor that I like.’”

Media reports have taken stabs at identifying Dot’s secret seasoning (Minneapolis’ City Pages called Dot’s Homestyle “buttery, garlicky, vaguely cheesy”), and she’s spurred her own line of copycats on food blogs. She’s even been called a “pretzel celebrity” by a pretzel podcast. From coast to coast, people now are guessing at what’s in her seasoning.

“If you notice, they don’t come off on your hands,” said North Dakota’s congressman, Rep. Kelly Armstrong, on his way to votes earlier this month in Washington, D.C.

But to taste expert Eric Berg, a professor in the animal sciences department at North Dakota State University and past president of the American Meat Science Association, the appeal goes beyond the seasoning to something subtler.

“It might be the crunch,” Berg said. “It’s not soggy. It’s not damp. And the twist to it, subconsciously, it may have some sort of deal there.”

(Whatever it is, Berg says his kids approve.)

Henke says the creation of the new flavors isn’t easy, especially with the realm of tastebuds out there. She wants MSG-free and gluten-free (“Everyone has a clean product now,” she says). She also has that eternal question over that dill. Or mustard. Or you-name-it.

“I have a dill flavor that I think is dynamite. But it comes down to a thing again, do I want to follow the others? Or do I just want to be the unique one that is the leader?” says Henke, whose confidence is never far away from small-town humility. “And that kind of sounds tacky too. But, I want to be me I want to be unique. I want to come up with my own stuff.”

Early this year, Henke stepped aside from day-to-day management of the company. She said it was necessary to avoid the tempting fall for many founders — doing someone else’s job, which isn’t what they’re necessarily good at. Henke said she retains the title of “founder” and still visits the plants often or attends showcases. And if she’s lucky, she’ll even snag a few hours to play around in the kitchen.

“I just monkey around with a pan, maybe two pans at one time,” said Henke. “I just tinker, very near everyday.”

And if she ever goes too far astray in that tinkering — too spicy or too bland — husband Randy is always there for a taste-test to pull her back in. She adds when it’s good, Randy will push her to do something her mother never did — write down the recipe.

“It makes me smile more when he goes, ‘Hmmm. What is that flavor?”

Dorothy “Dot” Henke, founder of the wildly popular Dot’s Homestyle Pretzels, and her husband and partner, Randy, were the featured guests Wednesday, Oct. 23, at The Stage at Island Park as part of “Women’s Entrepreneurship Week.” 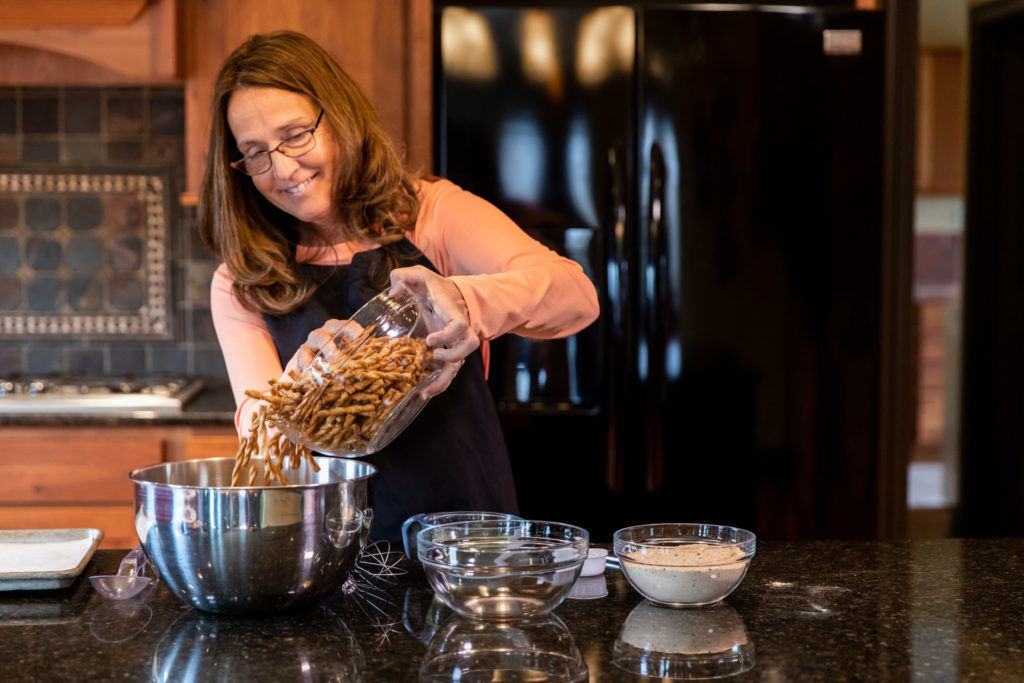 Dot Henke launched Dot's Pretzels from her kitchen in Velva, N.D., in 2012. 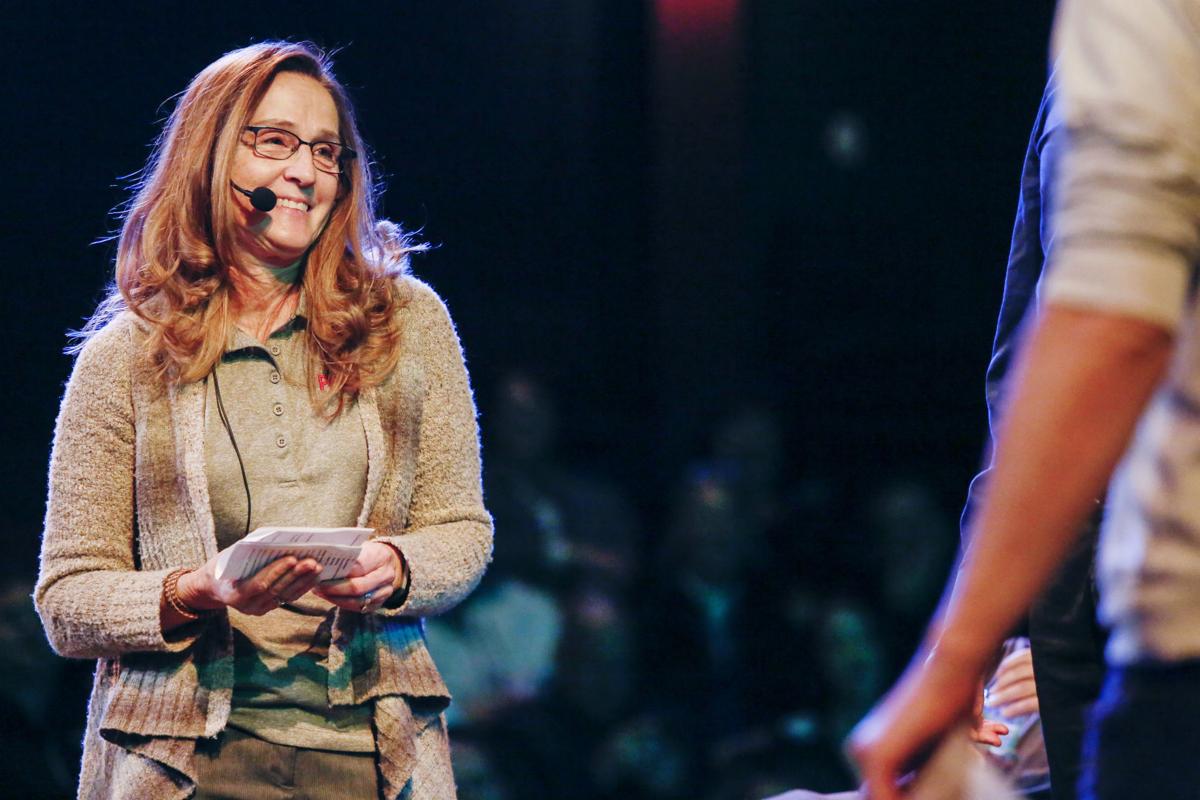 Dorothy “Dot” Henke shares her family’s entrepreneurial journey at the 1 Million Cups event on Wednesday, Oct. 23, 2019, at The Stage at Island Park in Fargo. Dot and husband Randy were headed toward retirement when making some of her seasoned pretzels in 2011 led to an unexpected business adventure. 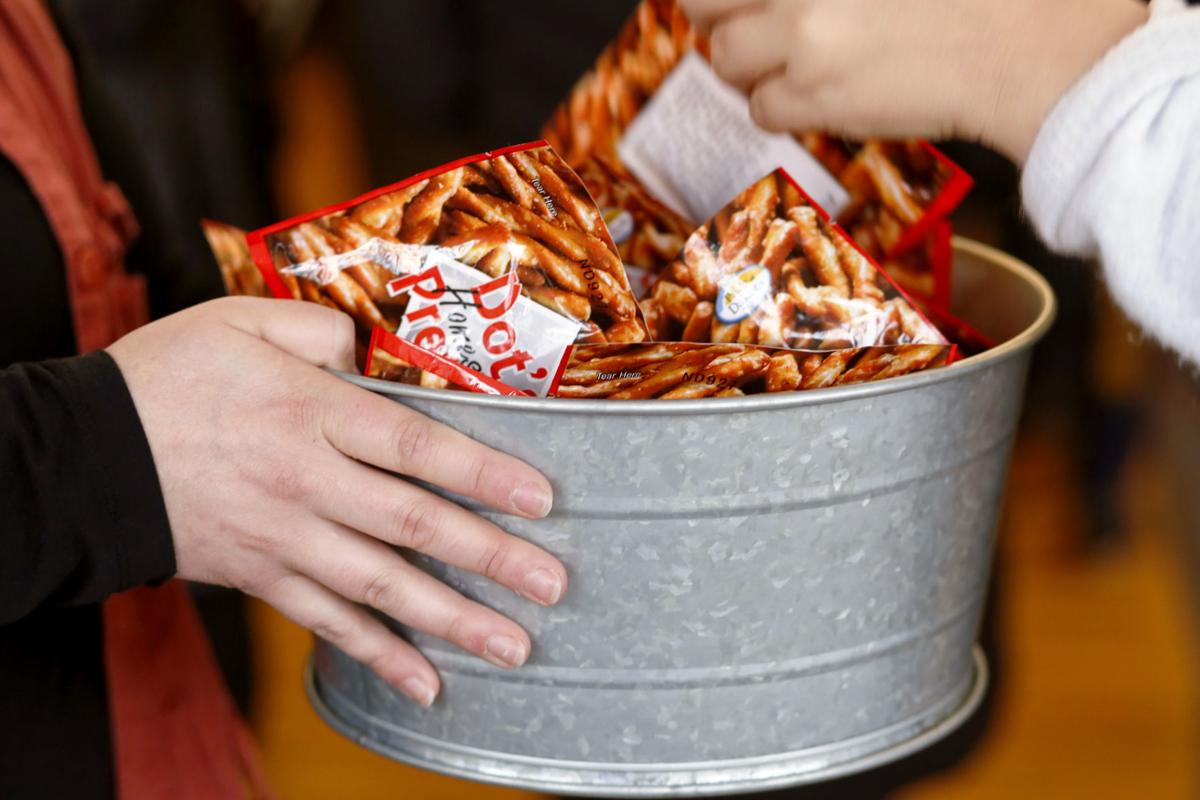 Free samples of Dot’s Homestyle Pretzels were on hand for the 1 Million Cups event on Wednesday, Oct. 23, 2019, at The Stage at Island Park in Fargo. Dorothy and Randy Henke, founders of Dot’s Pretzels, shared their entrepreneurial story during the event.