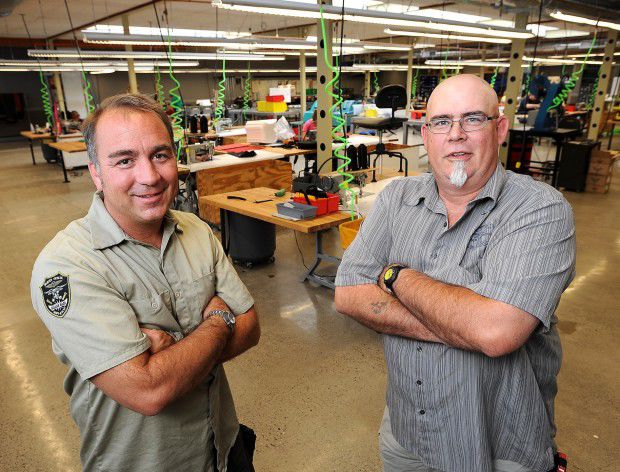 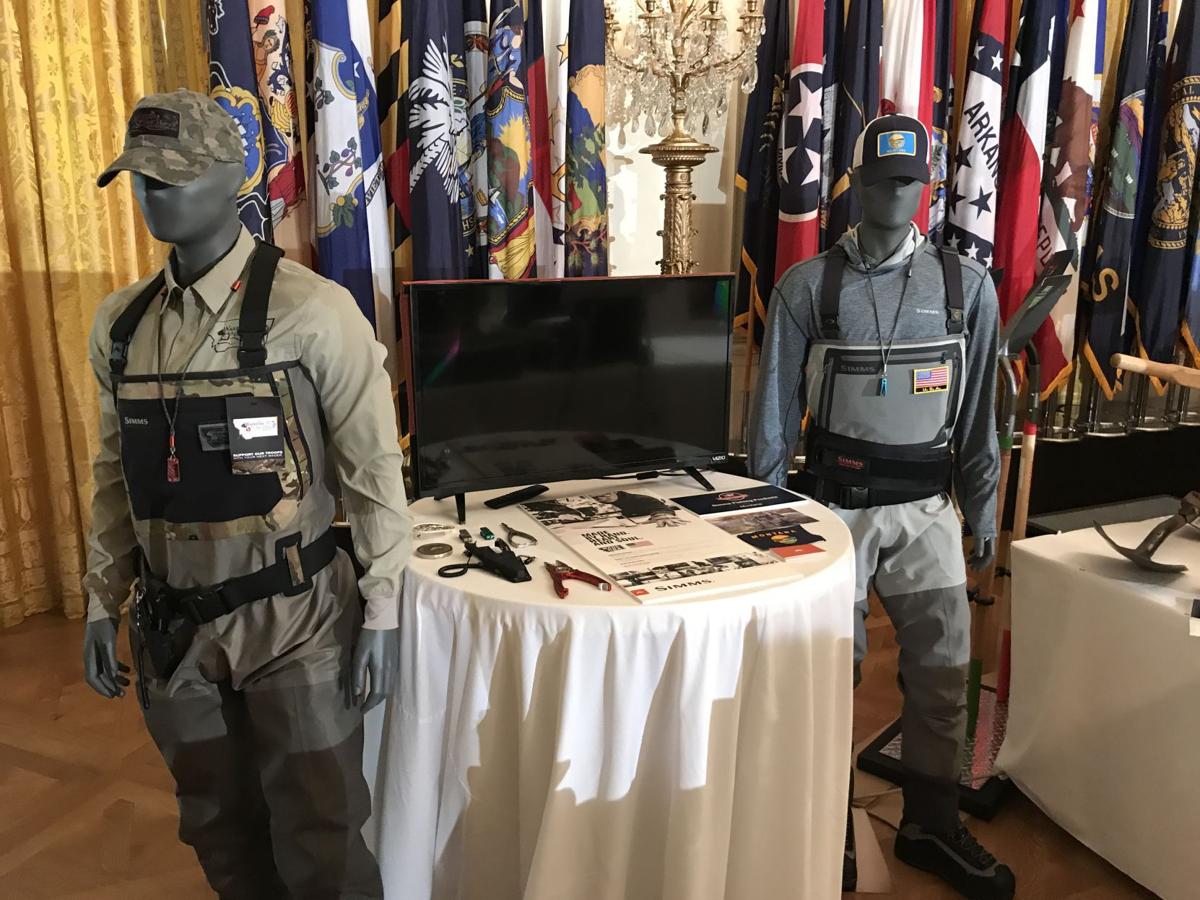 Mannequins are decked out in Simms Fishing waders and other gear at the recent Made in America manufacturing conference at the White House. 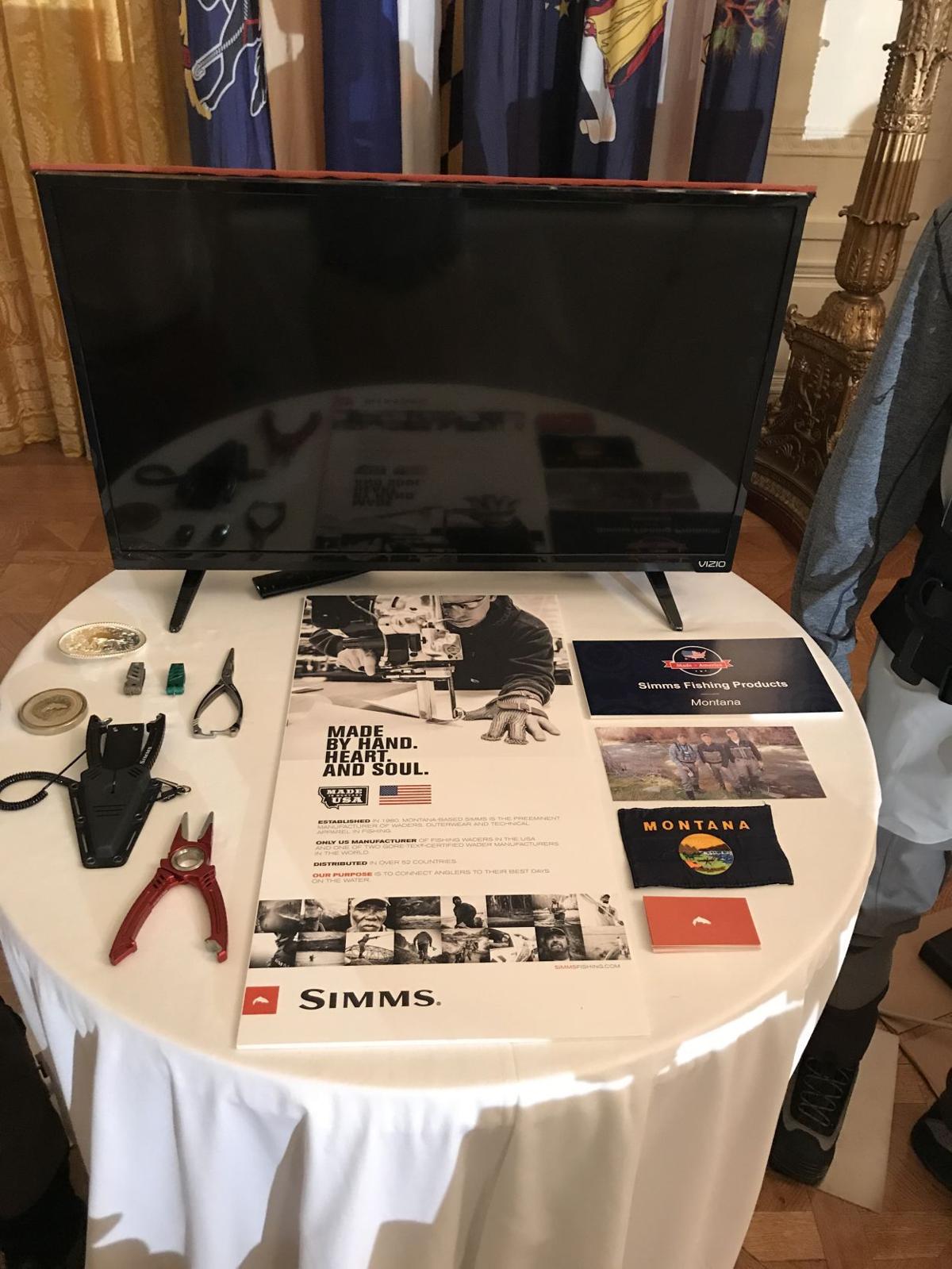 The Simms Fishing display at a recent Made in America event at the White House included pliers and other Montana-made fishing gear, a miniature flag and printed material. 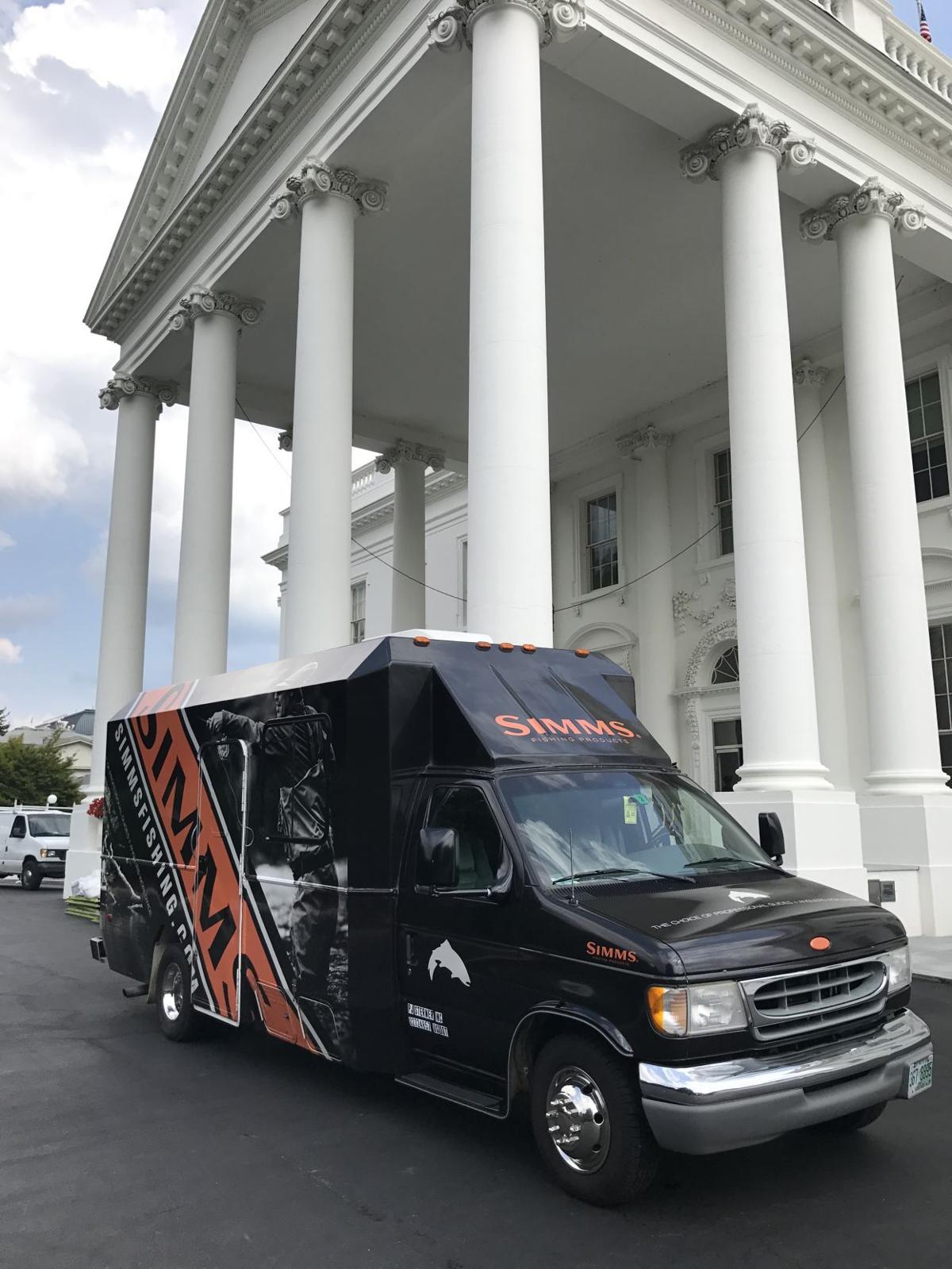 The Simms Fishing van is shown parked outside the White House for the recent Made in America event highlighting U.S. manufacturers.

Montana’s world-famous trout streams shared the national spotlight when Simms Fishing Products of Bozeman was selected to participate in the recent White House Made in America event that aimed to highlight the Trump Administration’s commitment to reviving manufacturing.

Using his bully pulpit to tout the virtues of American manufacturing, President Trump was photographed looking at lawnmowers and earth movers and taking a few swings with a baseball bat. The former New York real estate tycoon even donned a Texas-made Stetson cowboy hat.

“When we purchase products made in the USA, the profits stay here, the revenue stays here, and the jobs stay right here in the USA,” Trump said on July 17.

The event featured products manufactured in all 50 states.

K.C. Walsh, president of Simms Fishing Products, said he didn’t know a lot about the process of how Simms was selected to be among the 50 featured companies. Just days before the conference, he had received a call from Secretary of the Interior Ryan Zinke, Montana’s former congressman, informing him that Simms had been selected for the White House event.

If there was ever any doubt that Montana-based Simms had entered elite status among manufacturers of outdoor equipment, photos of the black Simms van parked beside the White House provided affirmation.

Simms Fishing Products, founded in 1980 by John Simms, is known for its high-quality waders, wading boots, sun-shielding clothing and other fishing-related gear.

Walsh said the display at the White House featured the company’s new G3 waders, which are made in a Gallatin County factory. A Montana flag and other Montana-made gear were also part of the display.

Just prior to the event at the White House, Walsh participated in an outdoor recreation industry roundtable, in which industry representatives advocated for the recreational industry and the outdoor activities that they represent.

“That made the trip worthwhile that we could represent the state and Simms at the White House,” Walsh said.

He said the White House event also gave him an opportunity to compare notes with other executives who are dedicated to expanding the market for American-made goods. “If nothing else, it has got American consumers to think about and value American-made products,” Walsh said.

With its small population and remote location, Montana is seldom viewed as a manufacturing stronghold. But new research shows that Montana’s manufacturing sector is growing at a faster pace than the nation as a whole.

U.S. manufacturing wage and salary employment rose from 11.5 million workers in 2010 to 12.3 million in 2016, a 7 percent increase, according to economist Paul Polzin, former director of the Bureau of Economic Research at the University of Montana.

By contrast, Montana manufacturing employment increased by 18.3 percent, from 16,400 to 19,400 jobs, during the same period, according to Polzin.

More noteworthy is that Montana’s manufacturing sector has rebounded since the end of the Great Recession despite some major setbacks. The Columbia Falls Aluminum Plant closed in 2015. During the 1950s the plant employed some 1,600 workers, but the plant hadn’t produced aluminum since 2009.

Smurfit-Stone Container Corp.’s paper mill at Frenchtown was the state’s largest manufacturing plant when it closed in 2009. And the plant's closure reflects a broader trend. Montana’s wood and paper products industry lost 465 jobs, 15 percent of its work force, between 2010 and 2016, Polzin noted.

Paddy Fleming, director of the Montana Manufacturing Extension Center in Bozeman, said the face of Montana’s manufacturing sector is changing even as the sector gains momentum.

At the turn of the 20th century, some 8,000 miners toiled underground to wrestle copper from the “Richest Hill on Earth.” Today, Montana’s copper industry employs hundreds of workers.

Huge factories no longer dominate Montana’s manufacturing sector. “Fifty-five percent of Montana manufacturers have been in business for less than 20 years,” Fleming said.

Here are some of the highlights of Montana’s manufacturing sector:

• Manufacturing accounts for 27.6 percent of Montana’s gross domestic product, up from 25.8 percent in 1977. Montana currently ranks 32nd in the country according to that measure.

• Company earnings in manufacturing have increased 14.1 percent since 2010.

• Workers involved in manufacturing earned an average of $47,227 in 2015, which is 17.5 percent more than the average Montana worker’s wages.

• There were 3,344 manufacturing companies in Montana in 2015. The largest category among those was for

These days, Montana’s manufacturers tend to be small, but many have received national attention. Last year Bozeman-based West Paw Design, which manufactures pet toys and beds, was honored by Forbes Magazine as one of America’s Best Small Companies.

Likewise, Billings-based Redd Ox, a manufacturer of rugged soft luggage, continues to receive recognition. Last year Red Oxx was named Montana Veteran-owned Business of the Year by the Small Business Administratin. The owers are Jim Markel and Perry Jones. Red Oxx has received nationwide recognition, including a national award for luggage. Red Oxx’s Safari Beano bag was Outside Magazine’s 2004 Bag of the Year.

Despite the upbeat state of Montana manufacturing, there is some reason for concern. The National Institute for Standards and Technology’s Manufacturing Extension Project, a major source of funding for the MMEC, would face significant cuts under legislation now being considered by Congress.

The program more than pays for itself, Fleming said. Studies show that each dollar spent on the extension program returns seven dollars in tax revenue because of increased economic activity, he said.

“We’re hoping our congressional delegation will help us out,” he said.

U.S. consumer prices rise by most in nearly 40 years

Mannequins are decked out in Simms Fishing waders and other gear at the recent Made in America manufacturing conference at the White House.

The Simms Fishing display at a recent Made in America event at the White House included pliers and other Montana-made fishing gear, a miniature flag and printed material.

The Simms Fishing van is shown parked outside the White House for the recent Made in America event highlighting U.S. manufacturers.