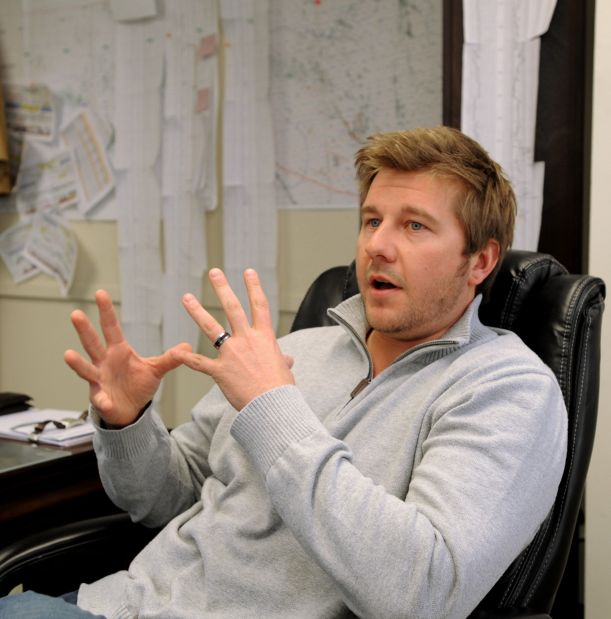 Casey Anderson, of Brara Geologic, talks about his company's work in the Bakken and other nearby oil fields. 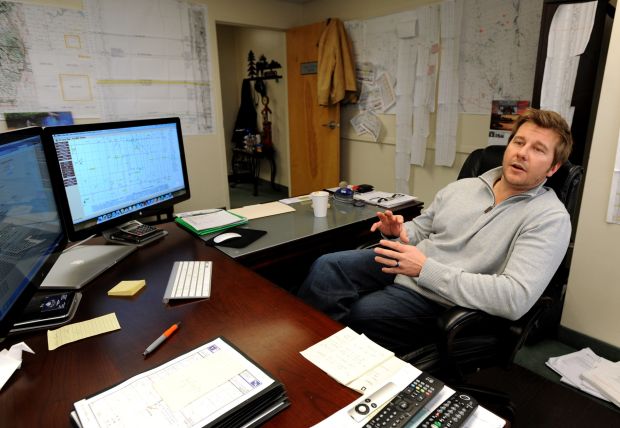 Casey Anderson, of Brara Geologic, talks about his company’s work in the Bakken and other nearby oil fields.

Casey Anderson, of Brara Geologic, talks about his company's work in the Bakken and other nearby oil fields.

Casey Anderson, of Brara Geologic, talks about his company’s work in the Bakken and other nearby oil fields.

From his office in Billings, Casey Anderson supervises more than a dozen petroleum geologists

who work for him throughout the Rocky Mountain West. Anderson, president of Brara Geologic

Consulting, has worked as a geologist all over the United States. But he says it makes sense to base

his company in his hometown of Billings, in part because of its proximity to the Bakken oil play

and other oil and gas producing regions in Wyoming and Montana.

“The Rocky Mountain region is pretty much our main area,” Anderson said. “We could be working in Pennsylvania,” which was the nation’s fastest growing natural gas producing state last year as the Marcellus Shale is developed. “But it’s just too far away.”

Anderson’s business is among dozens of energy-related companies that have discovered the grass is greener in the Billings area. Yellowstone County doesn’t have a single producing oil well, but nearly everywhere you turn, companies either directly or indirectly involved in energy development have sprouted or are expanding.

It’s hard to ignore that the Billings area benefits economically from the energy boom that has elevated North Dakota into the nation’s second largest oil producer.

Last year the Roughrider State saw its oil production climb to nearly 1 million barrels per day, trailing only Texas. And many see no end in sight.

For the past two years, Rig Mats of America’s plant in Lockwood has been producing rugged portable platforms that keep oil drilling equipment out of the elements. About 75 percent of RMA’s production goes to the Bakken, although mats are being shipped throughout the United States and Canada.

Billings is also home to a number of regional offices for energy companies. Nabors Completion and Production Services has operated a regional office in Billings for several years.

“We’re the only company that can do everything on the well from beginning to end,” said Russ Burch, human resources director for the Nabors office in Billings. “We can come in and build a well, drill it and put it on line for production. We can frack it and work it over.”

Burch said Billings is well suited for locating a regional office because of its proximity to oil and gas producing areas in Montana, North Dakota and Wyoming.

Horizontal drilling and hydraulic fracturing have paved the way for the Bakken’s rapid increase in production. But Nabors continues to work on many Bakken wells drilled during the 1980s, Burch said.

“We’re working those old wells over and fracking them to stimulate production, and our sister company is working on new wells,” Burch said. “We’re so busy that we can’t keep up with customer demand. One reason is that there aren’t enough employees.”

Nabors operates around 70 of the roughly 180 oil rigs operating in the Bakken, and the demand for employees remains constant, Burch said.

During a recent trip to North Dakota, Burch compiled the names of more than 150 companies that have advertised for oilfield jobs in the job service office in Williston. And that doesn’t include hundreds of openings in retail, construction, restaurants and other industries.

“We’re looking for people to build the future in Williston,” he said.

“If you’re here and make yourself available for work and you work hard, there’s opportunity for promotion.”

Burch said he has hired employees from all over the country, but those who are familiar with weather in the Northern Plains tend to know what to expect once they’re hired on.

Nabors runs a multimillion-dollar man camp in Williston that provides housing and food for employees. “All we ask is to keep a dry camp. That means no alcohol or nonemployees allowed in camp,” he said. “Safety is paramount. We’re looking at getting some stable workers and improving our safety numbers.”

Anderson said wellsite geologists play an essential role on an oil rig. They track the drill bit as it bores through various formations and remain in constant contact with other members of a drilling crew as the well progresses.

In the Bakken, where virtually all new wells involve horizontal drilling, the geologist advises when to begin turning the bit from the vertical axis to horizontal. Once the bit reaches the target zone, the geologist helps guide the bit so that it remains in contact with the oil-bearing formation while the lateral is drilled.

If the geologist makes a mistake and the bit wanders out of the target zone or if other problems arise, it could cost hundreds of thousands of dollars. Whenever that happens, the geologist runs the risk of being fired. Anderson is proud of the fact that his geologists have never been fired although hundreds of wells have been drilled.

“For what we do, the Bakken is good work,” Anderson said. “It’s consistent, and they’re making great wells. They’re drilling well after well, and they’re having great success.”

Anderson said the Bakken and other “source plays” for oil production are expected to remain busy for as long as oil prices remain in the $70-per-barrel range. But there’s plenty of potential in other areas.

By contrast, it costs about $7 million to drill a horizontal well in the Bakken. “If you only get 20 barrels a day out of that, you’re in trouble.”