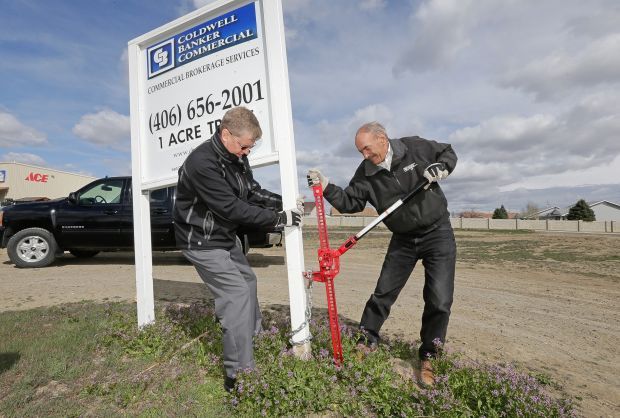 Coldwell Banker Commercial’s George Warmer and Blaine Poppler remove the for sale sign from the future home of Christian Brothers Automotive on Zimmerman Trail on Tuesday. 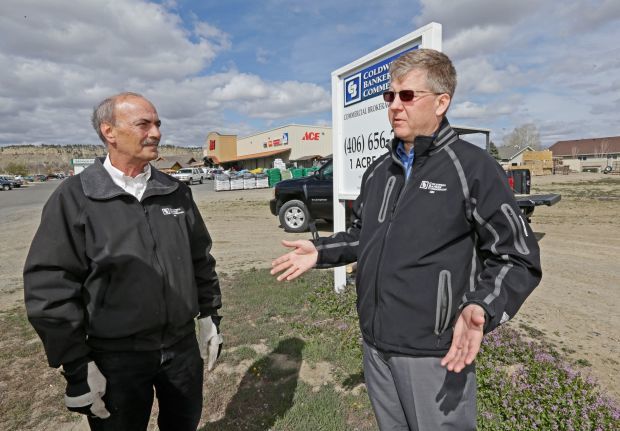 The new 5,000-square-foot, nine-bay facility will be between Walgreen’s at the corner of Grand Avenue and King’s Ace Hardware at 1551 Zimmerman Trail.

The Houston company is spending between $1.5 million and $2 million on land acquisition and construction. Franchise owners Tony and Laura McCoy are putting up an additional $400,000 for furniture, tools and other equipment inside.

The new shop is coming to a growing retail sector on the West End, and a planned $2.8 million widening of Grand Avenue from Zimmerman Trail to Shiloh Road this summer could spur further growth.

“We saw (Billings) as a very attractive market. We know there’s some strong residential growth, along with some good retail growth,” said Josh Wall, Christian Brothers vice president of franchise and strategic development.

Christian Brothers bought the one-acre parcel from Michael Fagan, according to property records. Terms of the deal were not disclosed. The property was listed at $610,316, or $14 per square foot.

Construction is starting this month, and the shop should open late this summer or early fall.

The land was originally farmland owned by the Zimmerman family, who came to the area in the early 1900s. It was sold to a church about a decade ago, then to commercial developers. The city approved a zoning change to allow commercial development several years ago.

Walgreens opened in 2008, and the Ace Hardware store came in 2011. Brokers say the addition of Christian Brothers helps create a commercial destination along Zimmerman Trail, particularly with access to Billings Heights along Highway 3.

“It solidifies that corner of Grand and Zimmerman Trail as a key retail center for future development,” said Blaine Poppler of Coldwell Banker Commercial, which marketed the property.

Other businesses on Zimmerman Trail also welcomed their new neighbors.

King had lobbied for the zone change and subdivided the property in the mid-2000s. He also owns a 1.4-acre parcel north of his store, which he’s seeking to sell to another commercial tenant.

Across Zimmerman Trail, the Zimmerman family owns 90 acres between Shiloh Road, and the Peter Yegen family controls additional developable land. The city of Billings has set aside $2.8 million this summer to widen the two-lane Grand Avenue from Zimmerman Trail to Shiloh Road to five lanes, largely because of the growth.

Faith in the company

Houston-based Christian Brothers was literally launched at a Sunday school class in 1982. Founder Mark Carr, a grapic arts salesman, met an auto technician in Houston at church, and the two decided to start a shop together.

Christian Brothers began franchising in 1996 and now has more than 100 locations, mostly in rural areas. No store has closed during that time.

The shop does full-service auto repair, ranging from oil changes to engine replacement. Technicians at Christian Brothers do not do body work.

McCoy, an oil investor and financial adviser with no auto tech experience, said he likes Christian Brothers Automotive’s model and philosophy. He added that his faith is important to him.

“It doesn’t mean we’re not going to do business with everybody in the community. It just means (the company’s) morals are in line with mine,” McCoy said.

McCoy will take a salary and run the books, and he said his first hire will be an auto technician. The shop will eventually expand to five employees and could grow further to 10 or 12, depending on business.

McCoy said he’s happy in his role running the finances.

“The repair guys, they want to do the repairs. They don’t want to mess with the advertising, the business and the books,” he said.

According to the franchise agreement, the McCoys pay Christian Brothers a monthly lease, and the two split the profits.

Wall, the vice president of franchise development, said the company doesn’t take its cut out of gross sales because it wants to be a partner in business growth.

“As they become profitable, they share those profits with us … It’s like we’re in the foxhole with them,” Wall said.

With Yellowstone County’s low unemployment rate, Wall said he expects that finding employees will be a challenge. Christian Brothers is studying the labor market and will aim to offer wages and benefits at the high end, but Wall declined to give specifics.

Have You Heard: Dentists to build new office on growing Zimmerman Trail

A group of dentists has purchased a 1.4-acre parcel on the growing Zimmerman Trail corridor and plan to build a new office there.

Coldwell Banker Commercial’s George Warmer and Blaine Poppler remove the for sale sign from the future home of Christian Brothers Automotive on Zimmerman Trail on Tuesday.