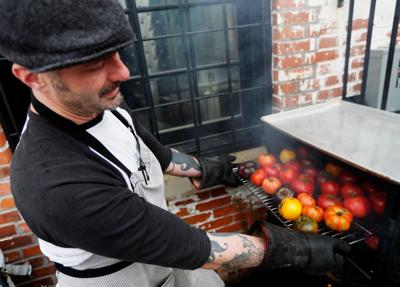 In an effort to highlight innovative chefs and the expanding list of local restaurants, the Downtown Billings Alliance has launched Restaurant Week, beginning Friday.

“We have award-winning chefs and restaurants willing to take risks and change their menu up,” said Lindsay Richardson, events director for Downtown Billings Alliance.

Twelve restaurants are participating, and the DBA hopes this inaugural event will grow to become one of the signature events of the year.

At last count, more than 40 restaurants operate in the downtown area and food choices continue to expand. Sassy Biscuit, a brunch joint that serves till 7 p.m. opened this year on North 29th, and Seva Kitchen, with a focus on global cuisine, opened in the former Travel Café across from the Alberta Bair Theater in 2017. Restaurants expected to open later this year include the juice and sandwich bar Well Pared in the Walker's building and the fast and casual pizza place Your Pie, which will open a second Billings location in the former St. Vincent de Paul store.

Last Chance Pub and Cider Mill is one of the newest restaurants to open on Montana Avenue. Sam and Lindsay Hoffman, known best for starting Red Lodge Ales, opened the cidery and pub in a formerly vacant warehouse in November 2016.

They ferment cider on-site and have been steadily expanding their line of hard ciders. Sam Hoffman said they use Montana apples as much as possible, but there’s not much infrastructure in Montana for apples. In late September, Hoffman and his crew were pressing their first batch of Montana apples, about 12,000 pounds that netted 900 gallons of juice. Though many of their products on tap utilize apples from outside the state, they do serve the “Full Montana,” a cider made exclusively with Montana apples and local beet sugar.

Finding quality, fresh food from local vendors becomes difficult in the winter. For chefs who are reliant on locally produced foods, when the season changes, their menus change too.

For Jason Corbridge, head chef at Last Chance Pub and Cider Mill, there’s nothing quite like a tomato fresh from the garden. He buys tomatoes in bulk during the summer from the Special K Ranch in Columbus. Kate Rossetto, an organic farmer in Billings Heights, and Rachel Negaard, who runs a small farm in Grass Range, also supply Corbridge and other Billings chefs with fresh tomatoes, greens, herbs and seasonal produce.

Tomatoes are just one of the many examples of food trucked from warmer locations when it's out of season in Montana.

“If something is closer, it’s not always, but should be fresher,” Corbridge said. “Forming relationships with these local gardeners, growers, and ranchers gives me access to what I believe to be superior products.”

Corbridge is in the midst of a menu change, which will swap out the BLT with one that uses preserved tomatoes in an effort to utilize local food and be responsive to the changing season. He's one of a handful of Billings chefs leading the local farm-to-table movement and estimates up to 60 percent of the products on the menu in the summertime are sourced from local producers. Corbridge also works with local businesses as often as possible to stock paper goods and cleaning supplies.

“For me, the ingredients come first. Second is supporting local business.” Corbridge correlates the two. “You’re putting money back into the state economy, and it’s good for everyone.”

Across the tracks, the owners of The Fieldhouse also source many of their products locally. “When you buy one dish here you are supporting three or four local people,” said Krystal Harmon, who opened the restaurant with her husband Ben Harmon. She estimates they source ingredients from 15 to 20 producers located from Billings to Bozeman.

The Harmons change their menu about four times a year. “We pretty much switch out everything,” Krystal Harmon said, with the exception of their popular Brussel sprouts and the burger. “We tried that, and it was bad. We brought it right back, but in a classic way.”

For one of the dishes offered during Restaurant Week, Harmon is working with fresh mustard greens from Kate’s Garden. In the fall, these frilly leaves turn red and become a bit less spicy. “Some will just knock you out, they are so spicy and lovely,” Harmon said. “They were just out there and kind of shouting at me.” He garnished the dish with pears, which are also in season, and bits of honeycomb from an apiary in Laurel.

Harmon loves to share. Even in home-ec class in high school, he recalls wanting to share homemade cookies. “What is the point if nobody’s enjoying it?” he said.

Billings has attracted plenty of great chefs including the former chef of the Northern Hotel Tim Freeman, who appeared and defeated the Iron Chef Bobby Flay on the popular Food Network show “Beat Bobby Flay.”

Freeman’s exit from the Northern ushered in Nick Steen, a former Billings resident who returned to cook and is now the head chef at Walker’s. Steen was twice named Top Ten Chef in the Northwest by The Culture Trip. Jeremy Engebretson, owner of Lilac and general manager and executive chef at the Billings Petroleum Club, was named a semi-finalist in the 2018 James Beard Foundation Awards at the Top Executive Chef in the Northwest.

Billings is also home to one of the 10 best burgers in the world at the Burger Dive, according to TripAdvisor, and Café Zydeco on Montana Avenue was named the fourth best Cajun and Creole restaurant in the country by MSN.com.

Restaurant Week is part of the DBA’s strategic plan to position downtown Billings as an “economic, cultural, and social center of the Northern Rockies and Plains states.” DBA staff have begun implementing parts of the 20-year strategic plan, which was initiated by the DBA and presented by the Indianapolis consulting firm Thomas P. Miller and Associates in February.

The plan includes focusing on the key industries in Billings, such as restaurants and other eating places that offer opportunity for entrepreneurs and “emphasize the authenticity of the downtown community and help to retain talent and corporate functions in downtown,” as identified in the document.

Though Billings is a small metropolitan area, it keeps up with larger cities in terms of restaurants per capita. According to 2015 County Business Patterns data, Billings had 312 establishments classified as “restaurants and other eating places.”

“Given Billings’ size, we would expect Billings to have only 1.6 restaurants per 1,000 people. Instead, it had 1.84 restaurants per 1,000,” said Bryce Ward, co-founder of ABMJ Consulting and an economist at the University of Montana. “This is roughly the same as Denver, slightly less than Portland and Seattle, but more than Minneapolis and Salt Lake.”

The DBA launched Restaurant Week during October because tourism slows and businesses typically experience a lull before the holiday season, according to Maisie Sulser-Handley, director of development for DBA.

To sweeten participation, DBA is offering a Foodie Passport that comes with a discount offer to a hotel stay at the Clocktower Inn or Northern Hotel. Participants can ask to have their passport stamped at participating restaurants, and can drop it off at the DBA Office to be entered into a drawing for prizes and vouchers to downtown businesses.

For a full list of participating restaurants, to purchase a passport, or for more details, call 406-294-5060 or visit www.downtownbillings.com/restaurantweek.

“Bowls!” is the title that shouted at me one morning when I got to work, where cookbooks seem to magically appear at my desk overnight.

The newly christened Walkers Neighborhood Provisions is set to show off its makeover on Thursday, when it opens to customers after a month-lon…

Billings' Burger Dive is one of the 10 best burger joints in U.S., TripAdvisor says

The historic Rex restaurant on Montana Avenue was built in 1910 and has been a landmark in in downtown Billings.

Some of the best food downtown Billings has to offer

Downtown Billings has a myriad of restaurants to choose from. Check out some of the best food and drink that can be found downtown.

The Yellowstone Valley Food Hub, a new producer-owned agricultural cooperative, will host a Preview Pick-Up Party on Dec. 1 and Dec. 22.

Billings is the best city in Montana, according to Money magazine's annual “Best Places to Live in Every State” ranking.

Last Chance Pub and Cider Mill has hired a new head chef and plans to release an updated menu for spring.

It’s hard to imagine George Clinton and Parliament Funkadelic performed in a building now housing natural foods, but that’s the story of one o…

Jason Corbridge hasn’t let much grass grow under his feet since leaving as head chef of Last Chance Cider Pub earlier this year. Though he’s h…

In Montana, Burger Dive is king, according to Yelp reviewers

There it is at the top of another list. 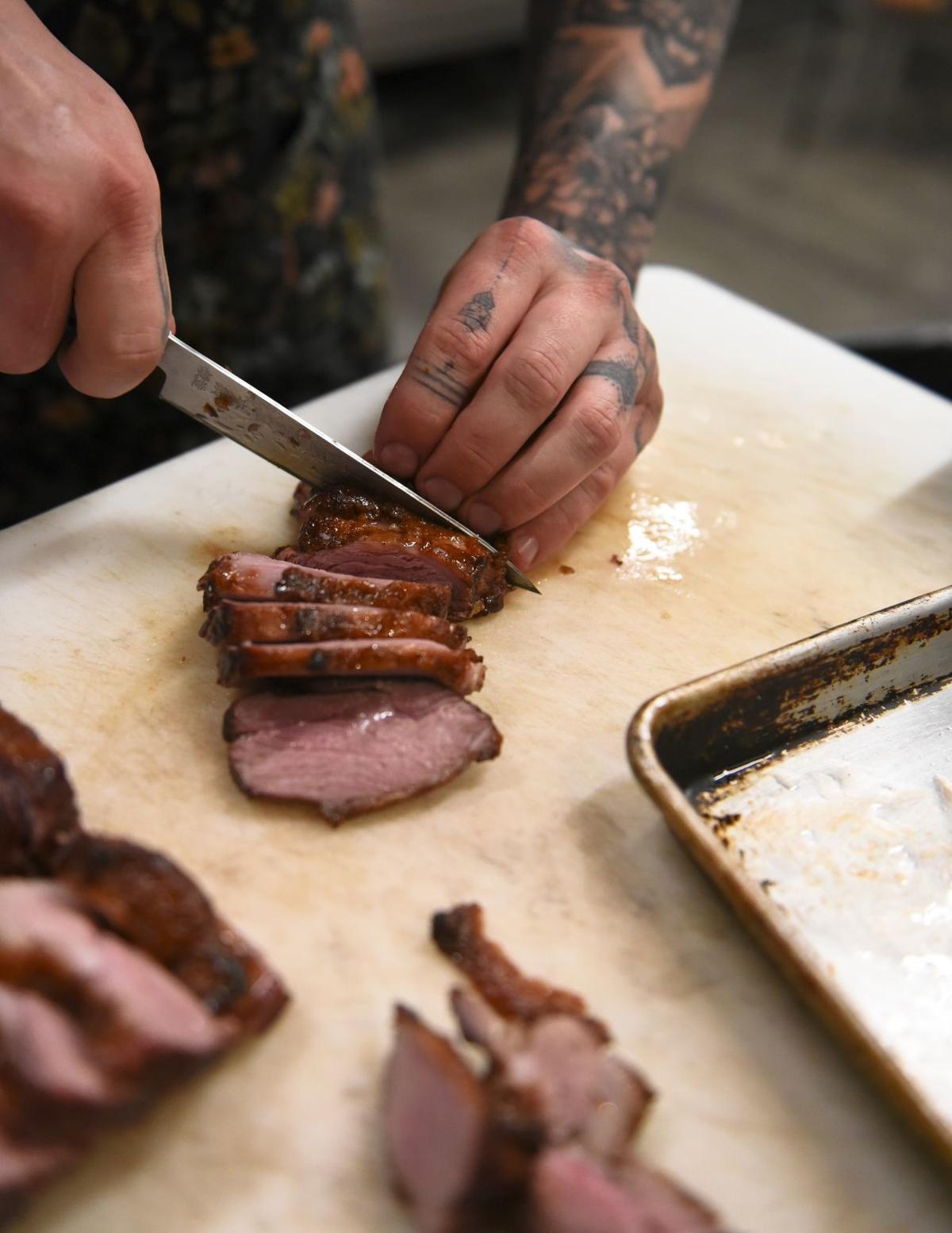 The Fieldhouse chef Ben Harmon prepares lamb for a main course that will be featured during restaurant week. 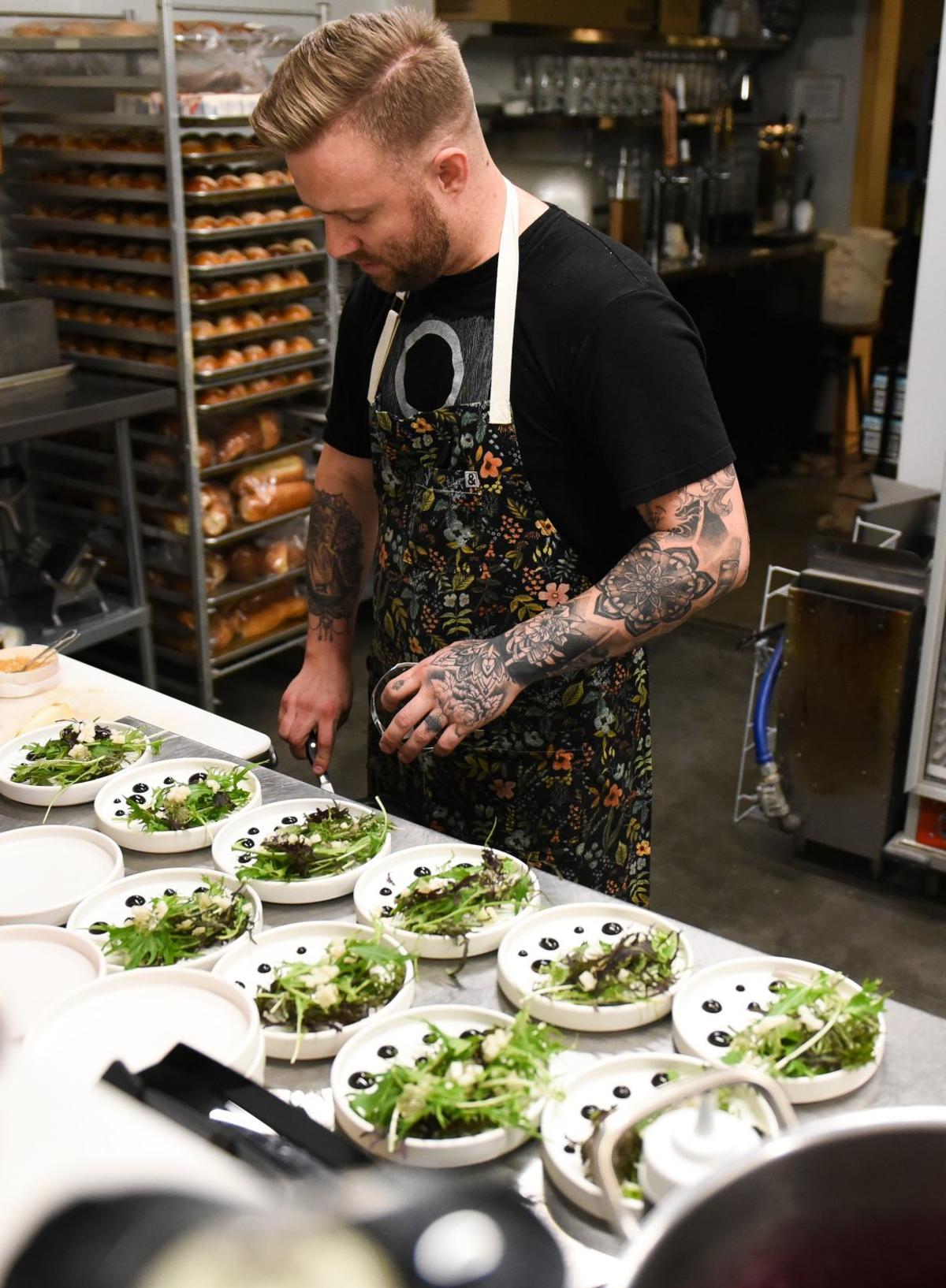 The Fieldhouse chef Ben Harmon prepares a salad of mustard greens and local pears, sourced from a local gardener in the Heights, and honeycomb from an apiary in Laurel. During Restaurant Week, taking place Oct. 5 - 13, chefs from downtown restaurants will be preparing special dishes not available on their current menus. 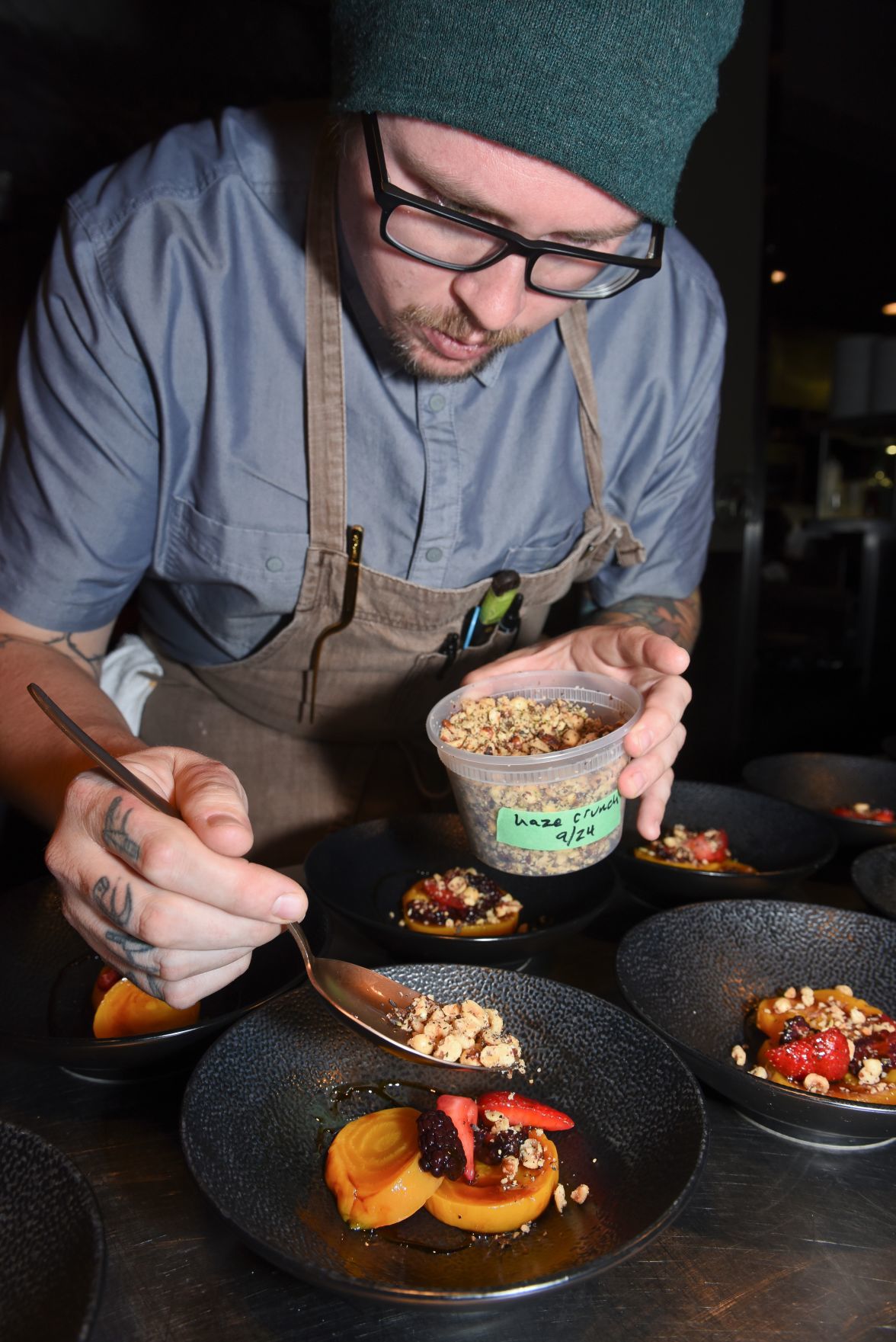 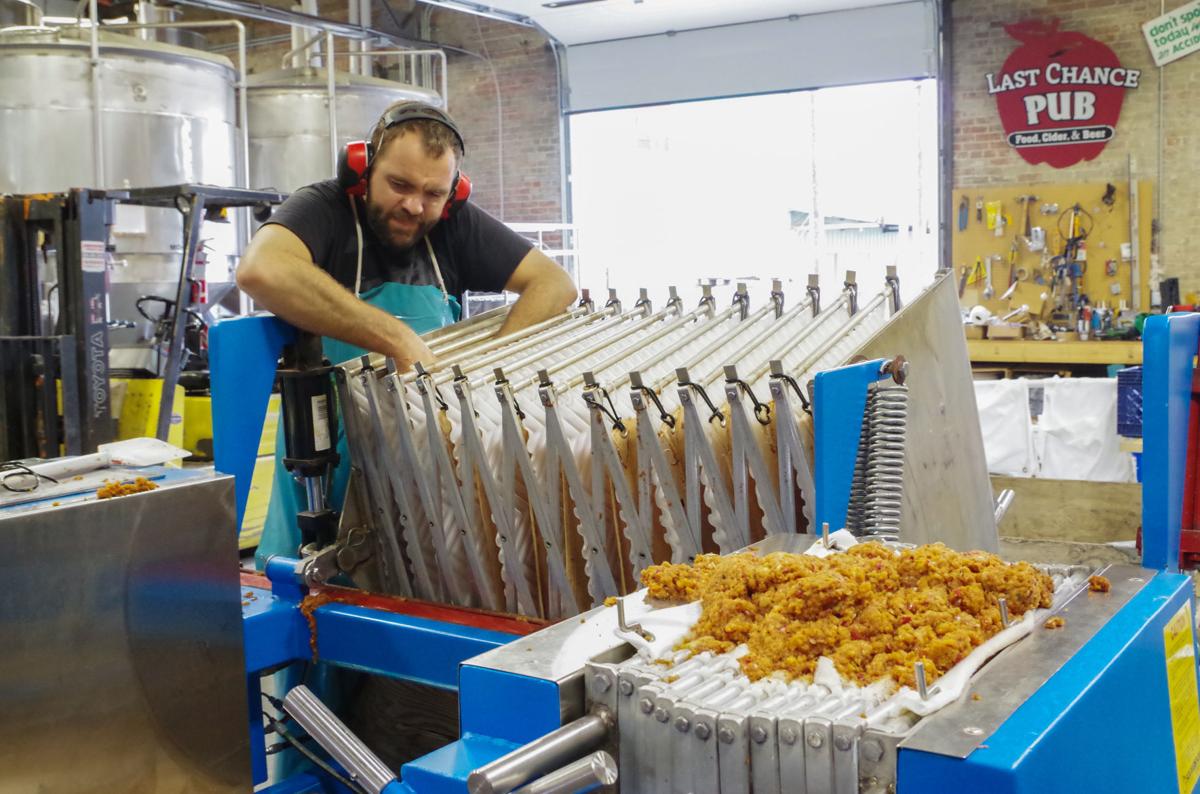 Travis Charboneau, head cider maker for Last Chance Pub and Cider Mill, cleans apple pulp from an accordion press on Sept 27. The local purveyor of cider sources many of its apples from Montana farmers, and has a cider on the menu that is exclusively made of Montana products, including local sugar beets and regionally-sourced apples. 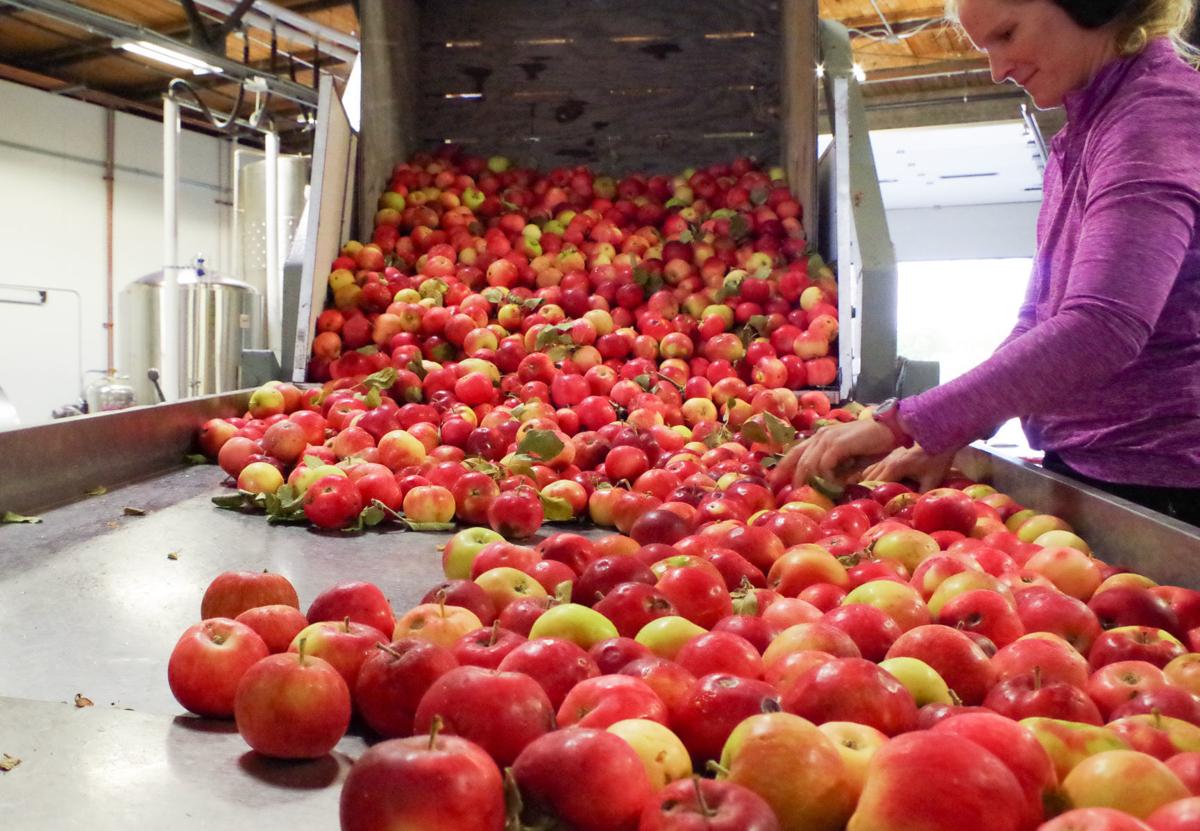 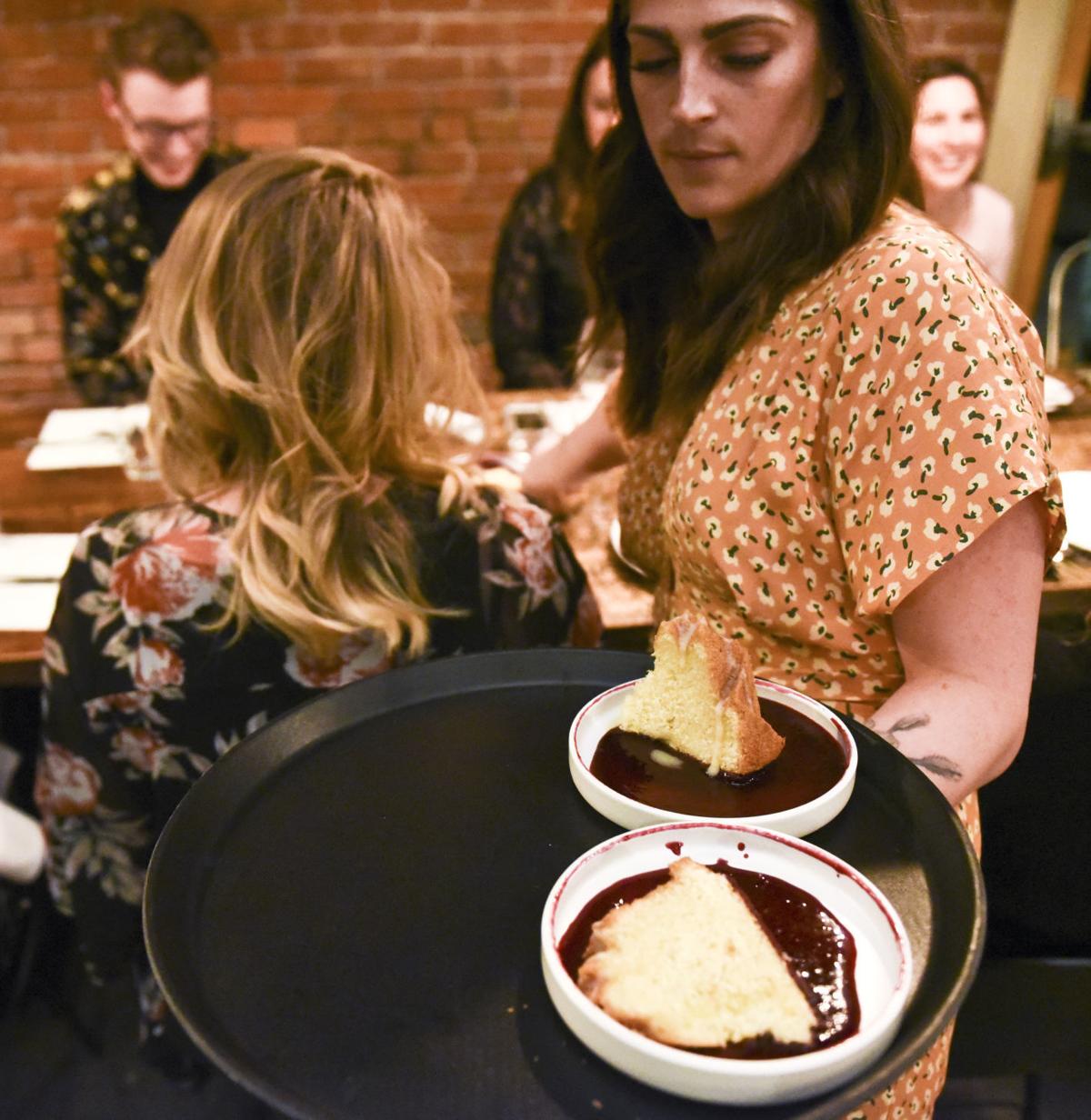 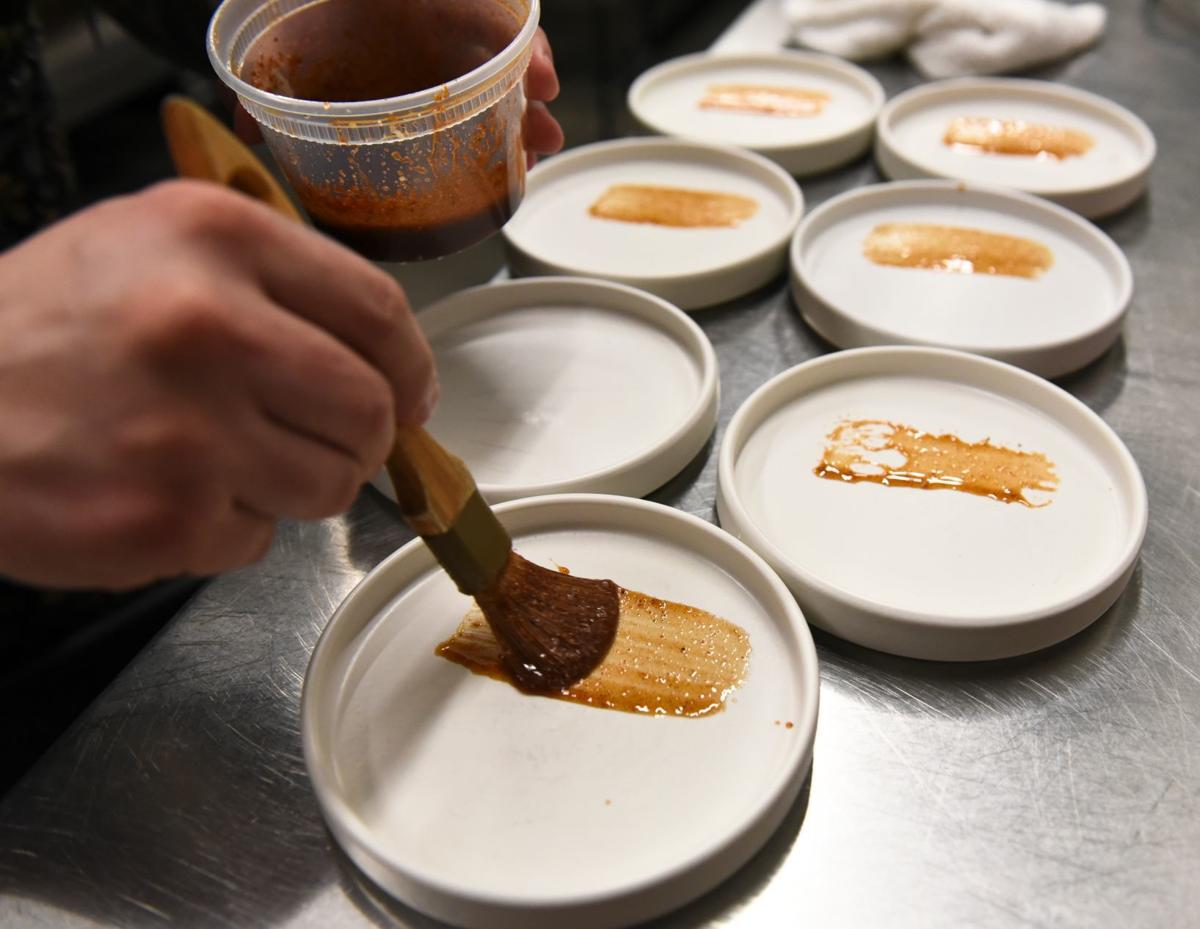 The Fieldhouse chef Ben Harmon prepares a main course for guests during a preview of the menu for Restaurant Week. 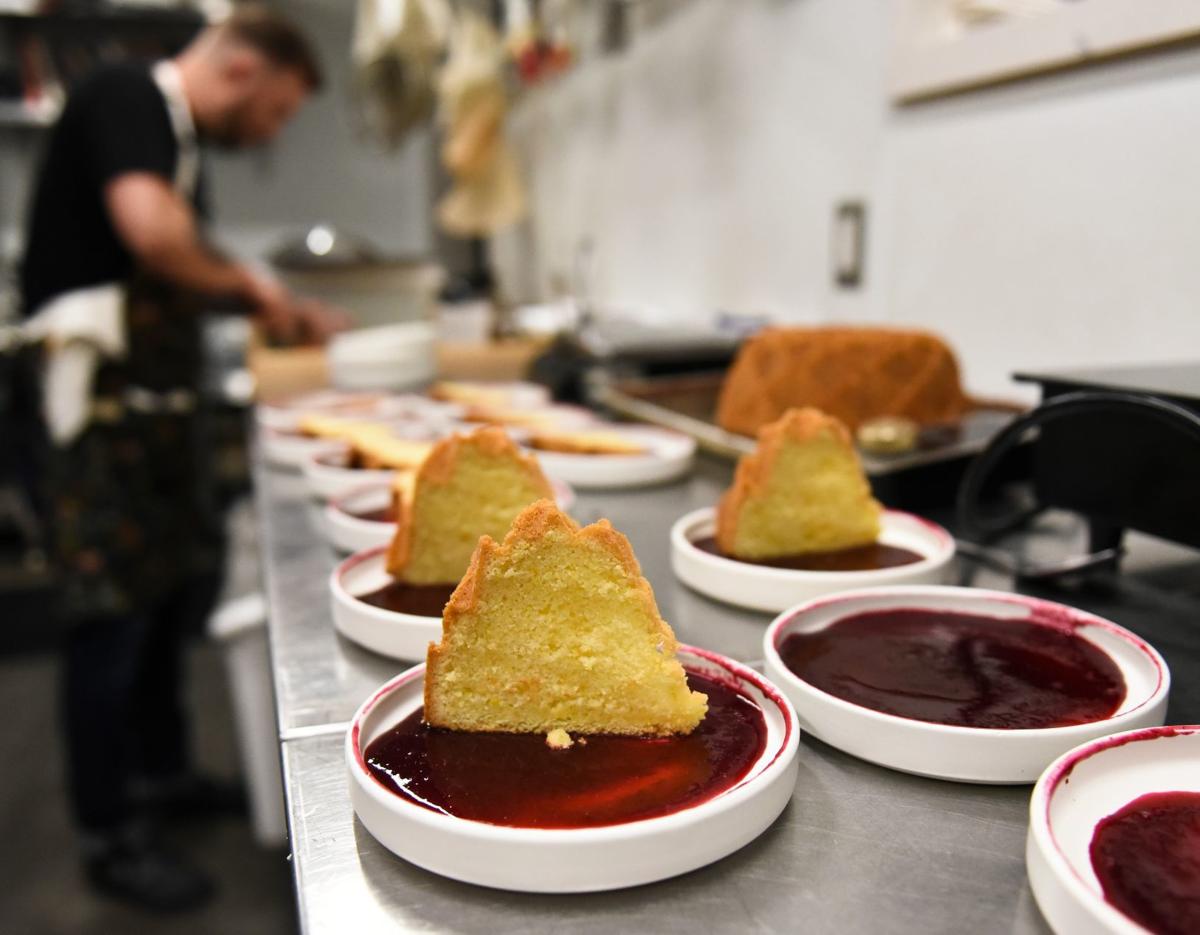 Desserts stand waiting to be taken to guests as The Fieldhouse chef Ben Harmon works on making more in advance of Restaurant Week, which takes place in downtown Billings Oct. 5 - 13. 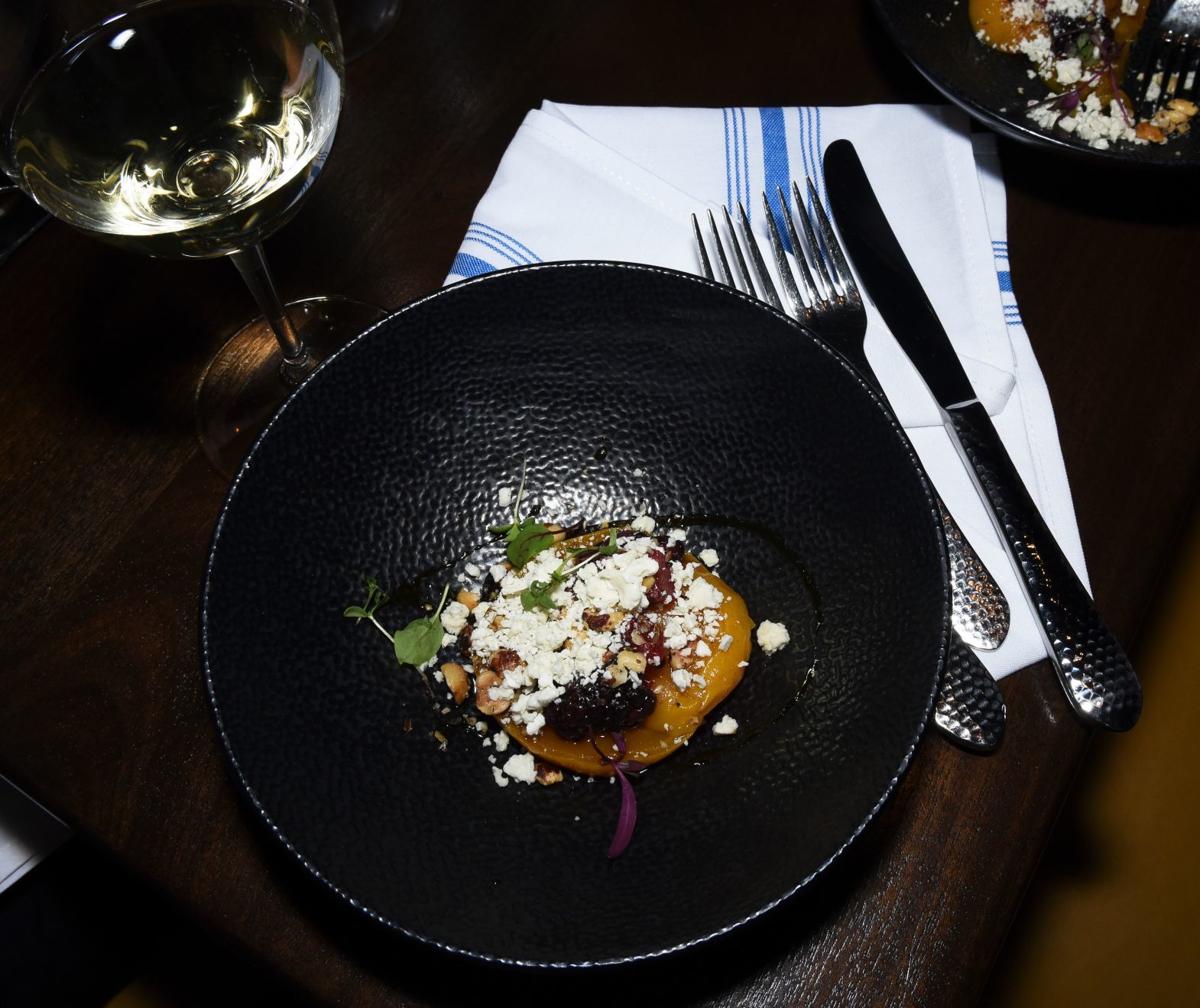 This appetizer that was prepared in advance of Billings Restaurant week at Walkers is one of several special items not available on the current menu. 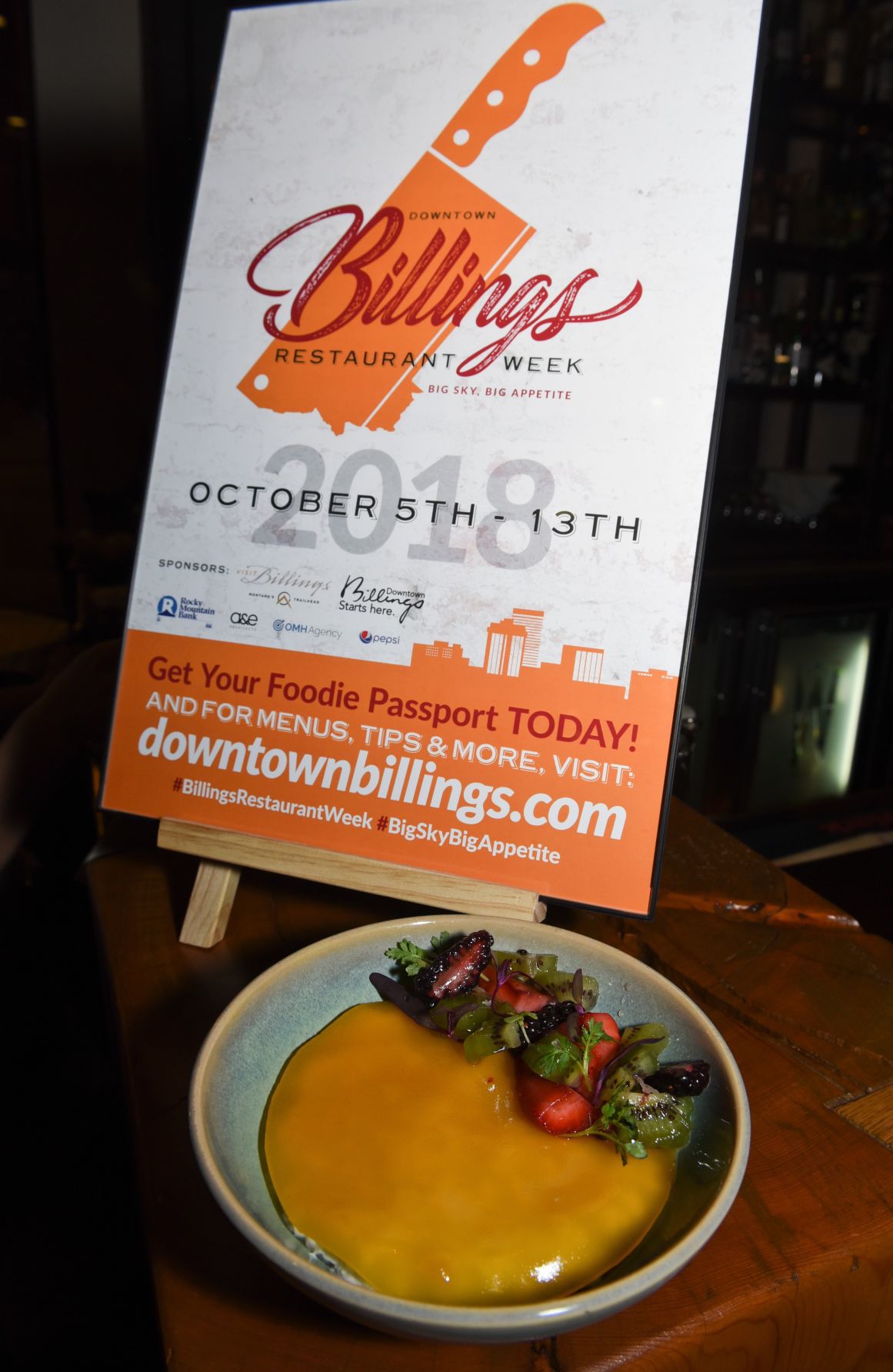 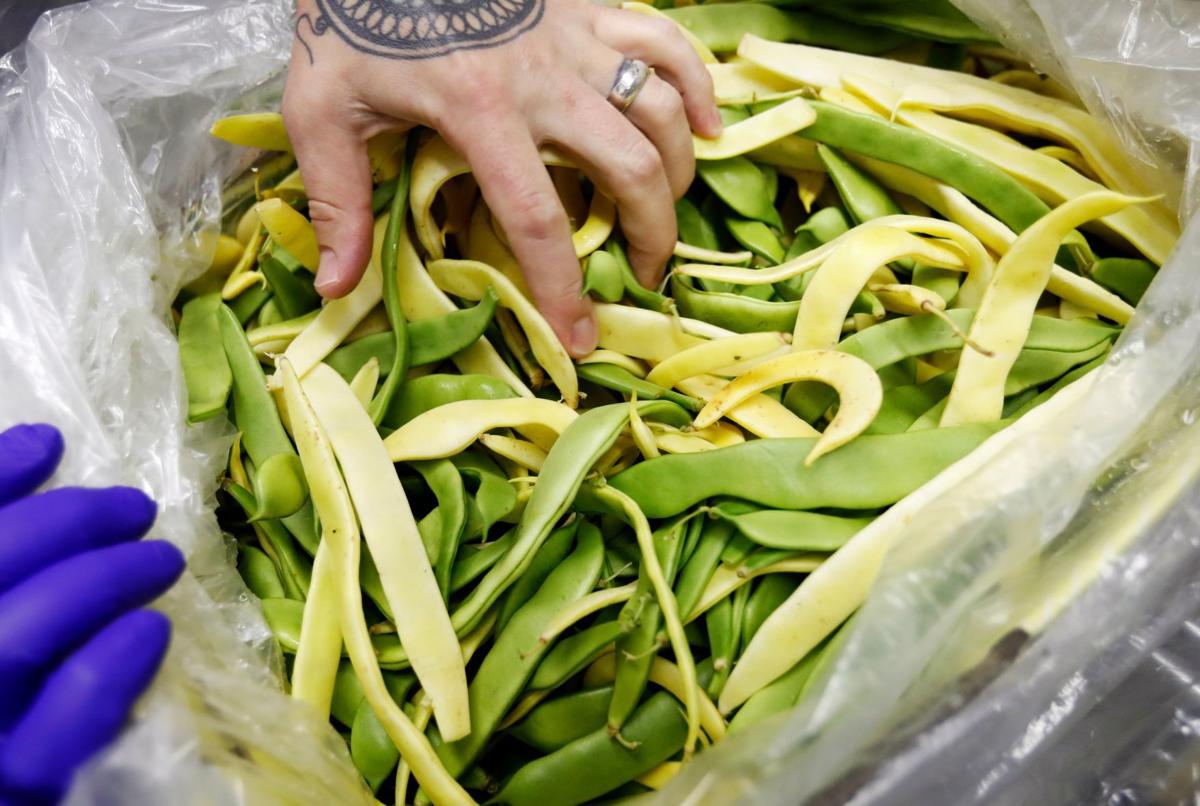 Chef Jason Corbridge shows some beans from Kate's Garden he used on the menu at Last Chance Pub and Cider Mill in 2018. 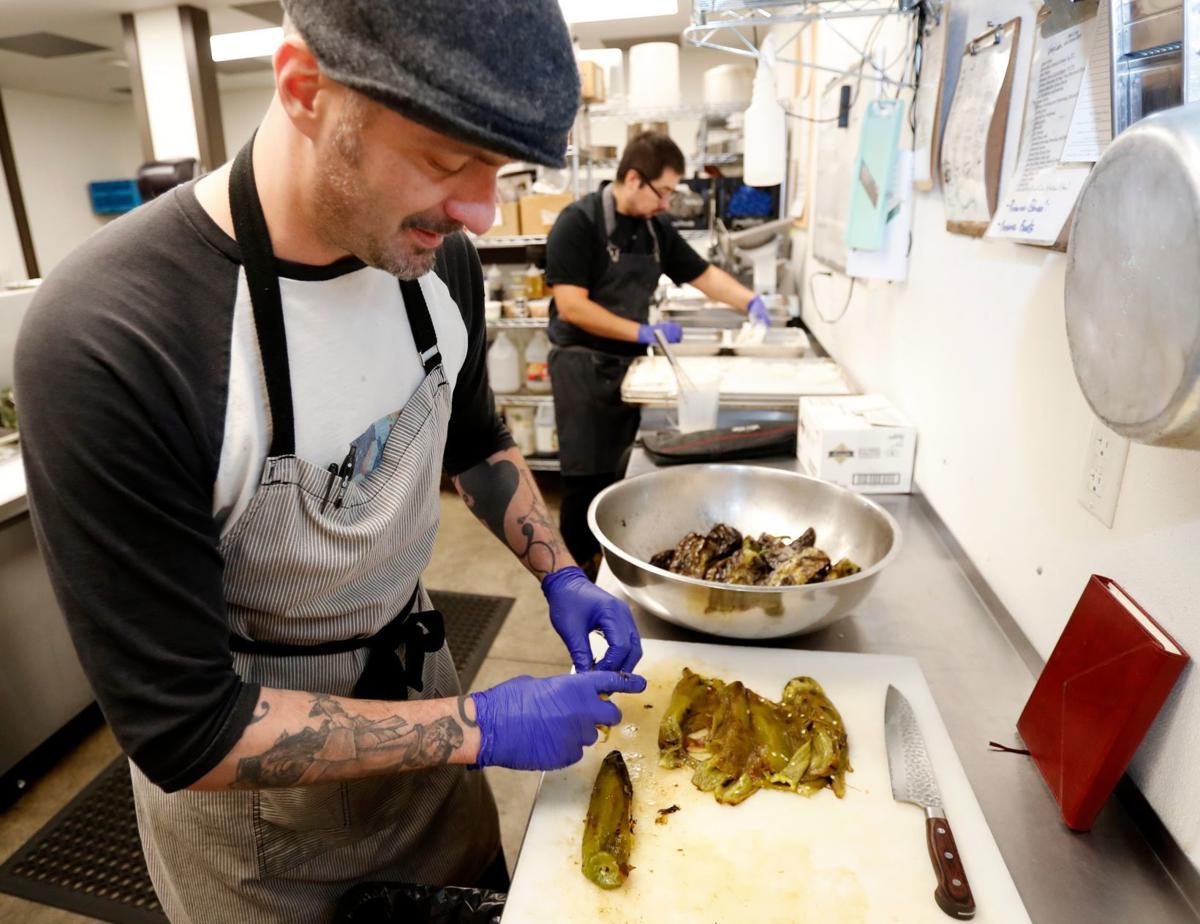 Chef Jason Corbridge prepares Anaheim peppers from Kate's Garden for a green chili salsa in October 2018 while head chef at of the Last Chance Pub and Cider Mill. 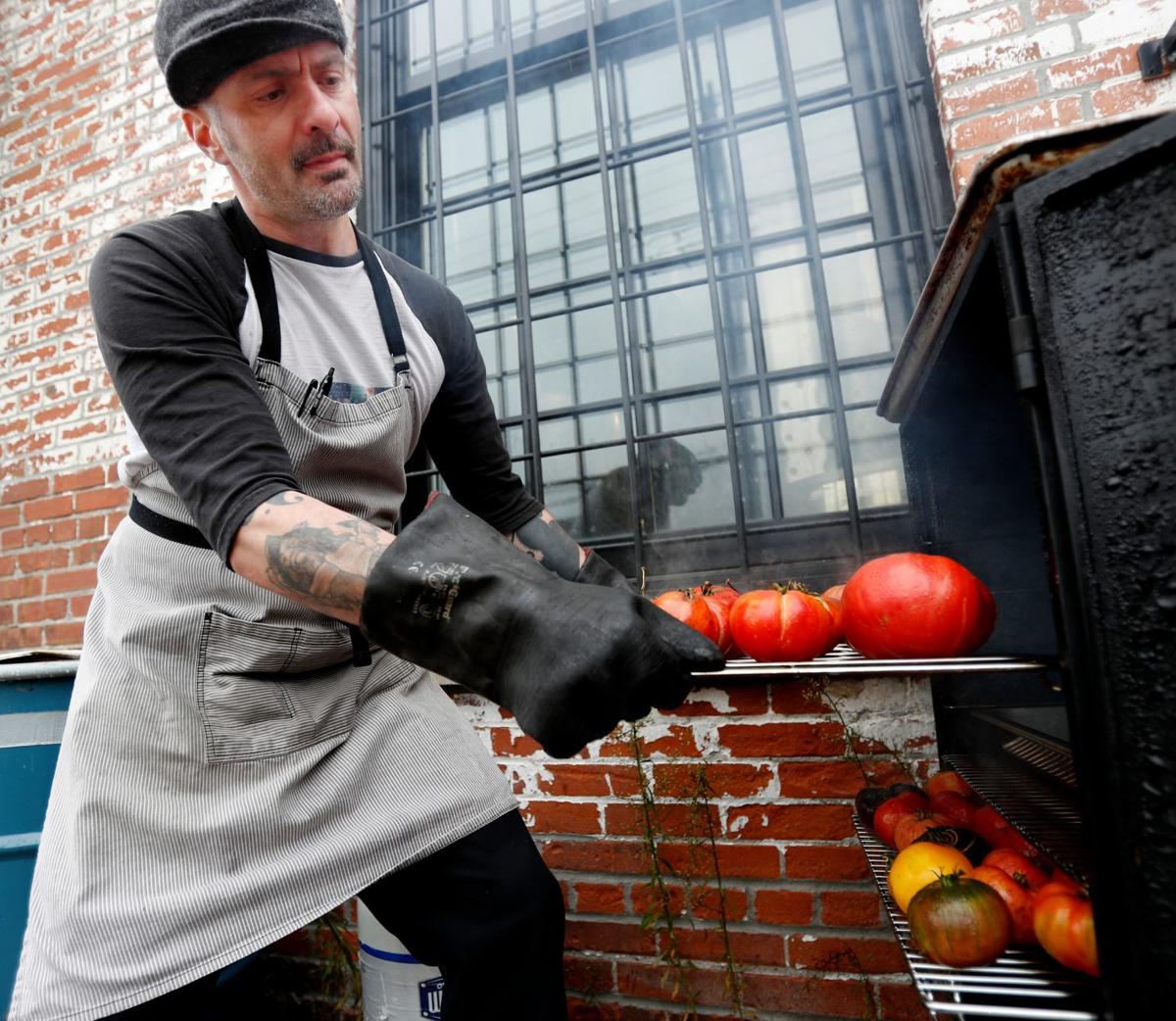 Chef Jason Corbridge checks on a batch of tomatoes from Kate's Garden that he is smoking with apple wood chips in 2018 while head chef for the Last Chance Pub and Cider Mill. 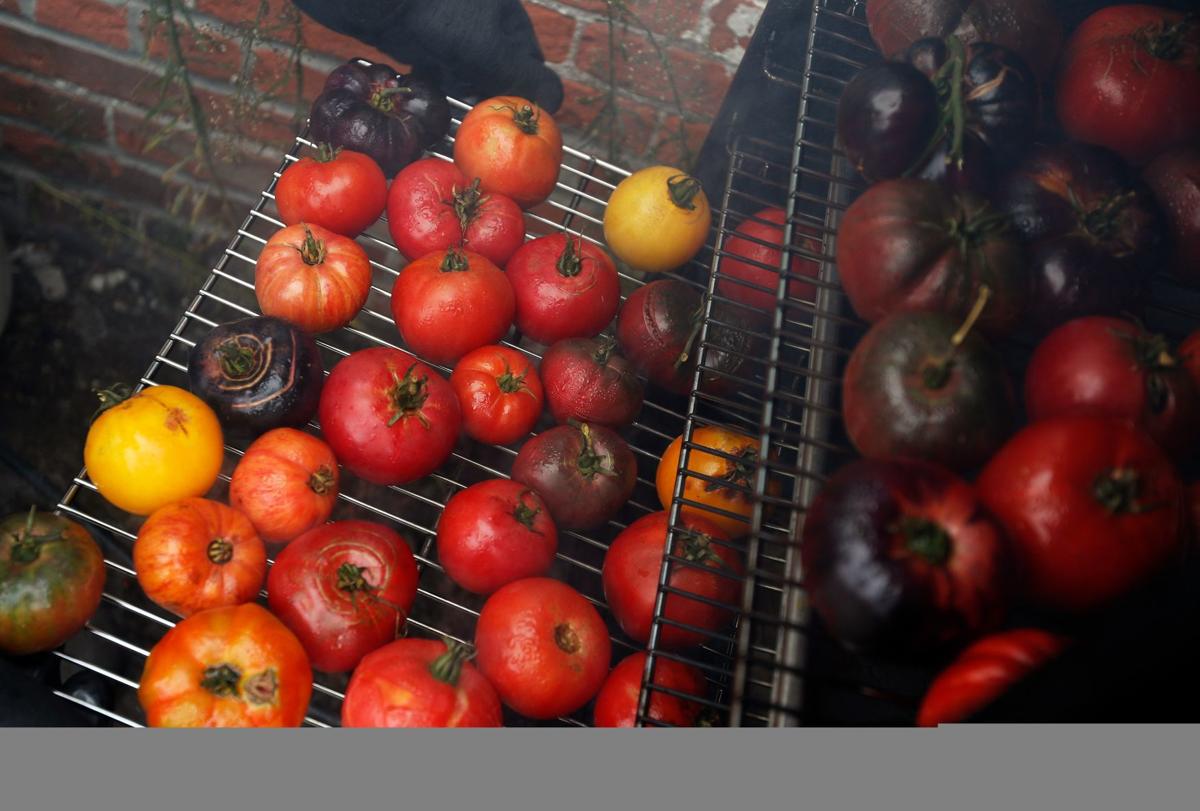 Chef Jason Corbridge of the Last Chance Pub and Cider Mill checks on a batch of tomatoes from Kate's Garden that he is smoking with apple wood chips Thursday, October 4, 2018.