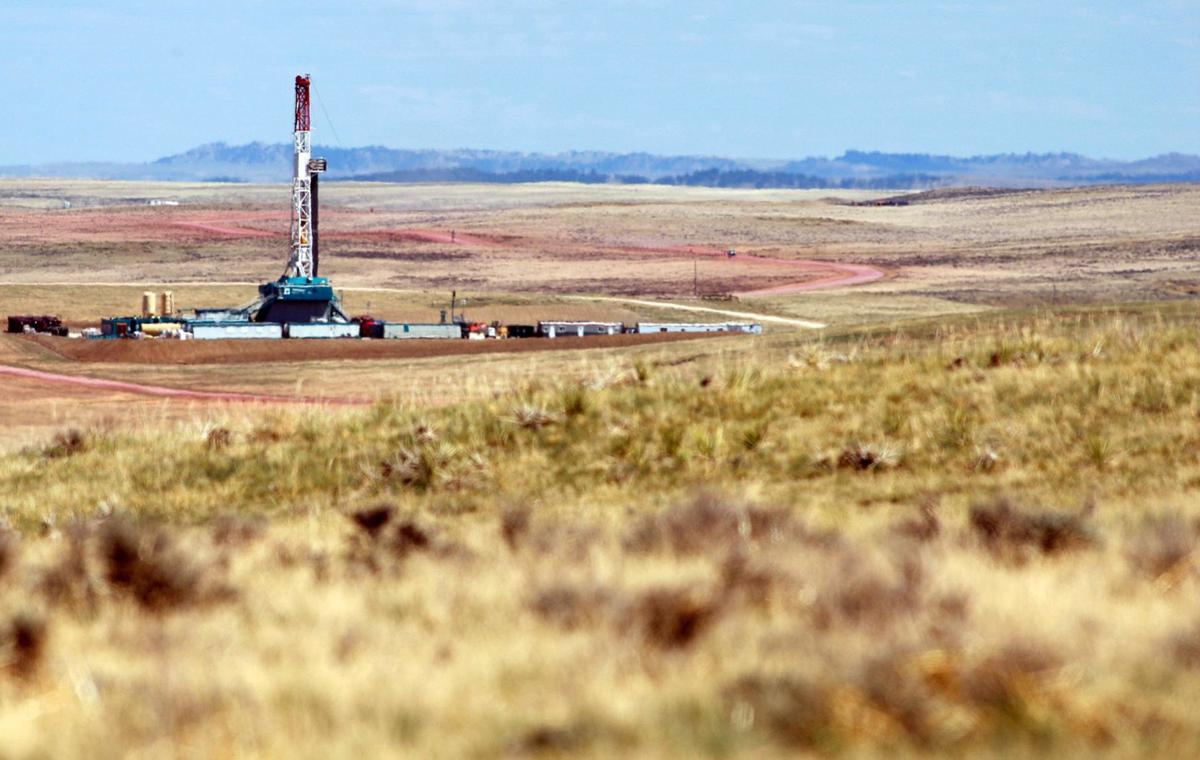 A Trinidad Drilling rig leased by Chesapeake Energy stands out from the bare landscape in Converse County north of Douglas in this 2014 file photo. 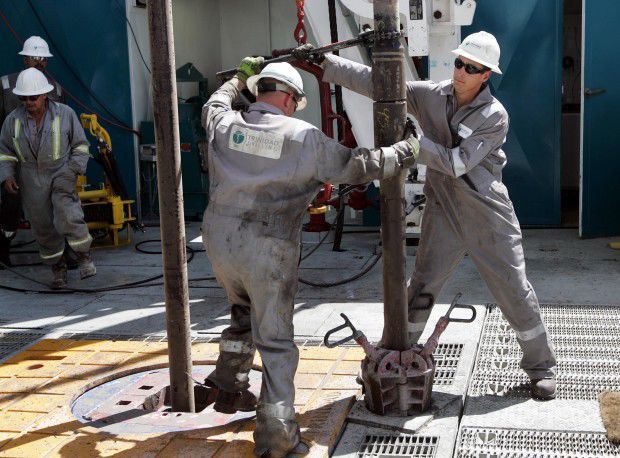 Workers join sections of pipe in 2013 on a Trinidad Drilling rig leased by Chesapeake Energy north of Douglas. The company announced Sunday it will file for bankruptcy and restructure.

Major shale producer Chesapeake Energy filed for bankruptcy Sunday in an effort to restructure and shed $7 billion of debt.

Pending court approval, the Oklahoma City-based firm said it had secured $925 million in debtor-in-possession financing, or interim funding, to keep operations chugging along during bankruptcy proceedings, including in Wyoming. Chesapeake's net debt load is approximately $8.62 billion.

"We are fundamentally resetting Chesapeake's capital structure and business to address our legacy financial weaknesses and capitalize on our substantial operational strengths," Doug Lawler, Chesapeake's president and CEO, said in a statement.

"By eliminating approximately $7 billion of debt and addressing the legacy contractual obligations that have hindered our performance, we are positioning Chesapeake to capitalize on our diverse operating platform and proven track record of improving capital and operating efficiencies and technical excellence," he added.

Though the company eliminated a portion of its liabilities in recent years, outstanding legacy debts and contractual obligations have continued to weigh it down.

Chesapeake has been a dominant fixture in Wyoming's oil and gas landscape for several years since it first set up shop in the state in the early 1990s.

Last year, Chesapeake produced nearly 9 million barrels of oil, ranking third in the state, according to data collected by the Wyoming Oil and Gas Conservation Commission. So far, it has maintained its ranking in 2020. It also secured 96 permits to drill in Wyoming in 2019, the fourth most in the state.

Currently, Chesapeake is the seventh largest producer of natural gas in Wyoming. A vast majority of Chesapeake's activity has been located in the Powder River Basin. The company started leasing land in the southern reaches of the basin and gradually expanded northward.

Mark Watson, supervisor of the Oil and Gas Conservation Commission, said he was not surprised to hear of the bankruptcy announcement given the company's high debt load. He's also not worried about future cleanup liabilities falling on the state. The wells are productive and relatively lucrative, he said. Even if the company did pivot to a Chapter 7 bankruptcy case and liquidation, Watson doesn't anticipate having trouble finding new owners.

According to Chesapeake, employees will continue to receive pay and benefits. The company told the Star-Tribune it employs approximately 1,900 workers across the country.

Founded in 1989 by the late wildcatter Aubrey McClendon, the company became known as an early trailblazer of hydraulic fracturing, or fracking, techniques in unconventional shale formations.

The company has had a fair share of financial troubles and controversy over the past three decades.

In its early days, Chesapeake dominated the natural gas market, aggressively scooping up huge swaths of land in Wyoming, Oklahoma, Texas, Ohio, Louisiana and beyond. But the influx of gas supply to the market — due in part to fellow operators also warming to fracking — led to a glut in the commodity. Natural gas prices started to wobble and deflate.

The 2008 economic recession and resulting energy price crash didn't help. Nor did the 2015 oil and gas bust. In 2016, former CEO McClendon was charged and indicted for distorting oil and gas lease prices, in addition to unlawful collusion. The following day, he died in a car accident, which the coroner later ruled an accident.

The leading energy company has struggled to get back on its feet since then. Lawler, a former Anadarko executive, came on to lead the company in 2013.

Now faced with plunging energy demand and prices precipitated by the COVID-19 pandemic, the once-preeminent shale producer has voluntarily filed for bankruptcy.

Watson, at the Oil and Gas Conservation Commission, called the trouble overshadowing the past few months "a nail in the coffin."

In its latest quarterly filings with the Securities and Exchange Commission, Chesapeake cited the increased volatility in oil and gas prices from the pandemic as reason for concern. "Based on our current forecast, we do not expect to be in compliance with our financial covenants beginning in the fourth quarter of 2020," the filing stated.

"We are in the midst of a difficult time for oil and natural gas and would expect more upheaval in the industry over the near to midterm," Ryan McConnaughey, of the Petroleum Association of Wyoming, said of the current environment. "While prices have increased from historic lows in recent weeks, they are still well below the break-even price for Wyoming producers — who contend with higher taxes and production costs here than their counterparts around the country."

"I am, however, optimistic about the resiliency of our members," he added.

The case will be heard in the U.S. Bankruptcy Court for the Southern District of Texas.

Chaos and scrambling in the US oil patch as prices plummet

The oil industry was already logging hundreds of bankruptcies before the coronavirus hit, as producers struggled with weak global oil demand and high debt loads.

A Texas company and its subsidiaries will pay a $2.4 million penalty to resolve alleged violations of the Clean Air Act for a crude oil transloading facility the companies formerly owned and operated on the Fort Berthold Indian Reservation in North Dakota.

How to Build Up Your Credit from Nothing

How to Build Up Your Credit from Nothing

A Trinidad Drilling rig leased by Chesapeake Energy stands out from the bare landscape in Converse County north of Douglas in this 2014 file photo.

Workers join sections of pipe in 2013 on a Trinidad Drilling rig leased by Chesapeake Energy north of Douglas. The company announced Sunday it will file for bankruptcy and restructure.