Meat Loaf, 'Bat Out of Hell' rock superstar, dies at 74

Fred Wacker, MSGA president, who was at the White House for the signing ceremony, said cattle prices had already increased on news that the deal would be signed.

Trade organizations, like the National Cattlemen's Beef Association noted that beef appeared to be the big winner among agriculture interests included in the limited agreement. Japan’s tariff on U.S. beef is 38.5%, which will decrease gradually to 9% by 2033. The reduction is on track with tariff cuts guaranteed to Australia and Canada under the Trans Pacific Partnership, a multi-nation trade deal the U.S. abandoned in 2017.

Japan is the biggest foreign buyer of U.S. beef and ranchers shut out of TPP had watched with noses pressed against the glass as competitors who stuck with the deal saw benefits.

“This is the largest beef trade that has ever been done in the U.S,” Wacker, who ranches near Miles City, said in a phone call after the signing. “This thing is going to benefit us in so many ways. It’s going to do the same thing for the grains, corn and wheat. Everyone in that room was smiling.”

Japan bought $1.09 billion in the U.S. beef for an eight-month period ending in August, the U.S. Meat Export Federation reported. It was a 9% drop as TPP partners began seeing benefits of the 11-nation agreement the United States initiated, but later abandoned as a surge of populism swept the country in 2016.

Similarly, U.S. pork sales to Japan had declined 5% to $1.07 billion in the first eight months of the year. Montana pig farmers told Lee Montana Newspapers in August that tariffs in Japan and an outright ban on U.S. pork by China, was eroding profits. The value of the U.S. pork in Asian markets had fallen sharply and 26 Montana hog farms were ranked in the top 30 recipients of U.S. Market Facilitation Program, which pays farmers for trade war losses. In 2018, 64 Montana hog farms split $1.77 million in trade aid, according to federal data gathered by the Environmental Working Group, a nonprofit government watchdog that’s made a point of tracking farm subsidies.

The U.S.-Japan deal signed Monday will cut the current 20% tariff on U.S. pork to zero by 2025. Like the beef tariff reduction, the easing of the pork tariffs now mirrors the benefits awarded to TPP countries.

Standing next to Wacker at the signing was U.S. Sen. Steve Daines, R-Mont., who later said landing the beef deal was crucial to Montana.

“This is a major step forward for opening up critical markets for our producers. This allows our Montana farmers, the Montana ranchers to compete on a level playing field with other international competitors who are also selling to the Japanese market,” Daines said in a phone call. “Japan is our largest beef export market and with this trade deal, over 90% of U.S. food and ag products are going to have access to free and fair trade into Japan.”

Daines, who serves on the trade-important Senate Finance Committee, said wheat farmers would benefit from grain-buying quota terms in the trade agreement. Daines had pressed the U.S. trade representative about getting the trade deal with Japan signed. He had also encouraged Trump to return to the TPP, though the president did not.

“It also provides a country specific quota for wheat and wheat products. It reduces the mark up, which is just another form of a tariff on U.S. wheat and barley,” Daines said. “So, bottom line, this is a deal that provides more opportunity for our farmers and ranchers. It’s been an honor to be the voice of Montana ag during these negotiations.”

Montana gross income for cattle sales in 2018 was $1.37 billion, according to the U.S. Department of Agriculture.

The terms of the limited trade agreement with Japan start in January. It’s been a rough two and half years of the trade dealing for U.S. agriculture, starting with the abandonment of TPP, followed by the trade war with China and the yet to pass Congress U.S. Mexico, Canada free trade agreement, the terms intended the replace the North American Free Trade Agreement. NAFTA had set the terms for U.S. trade with its two biggest partners for 25 years.

Last week, U.S. Sen. Jon Tester said he expected USMCA to pass once House Democrats settle some concerns about enforcing terms of the agreement with Mexico. Tester also said the U.S.-Japan trade agreement was welcome news, though he hadn’t seen the details and reserved endorsing the agreement until he does.

Wacker said he expected the trade agreement with Japan to nudge China toward a trade agreement. Trump mentioned Monday that Chinese Vice Premier Liu He would be in Washington for trade talks Friday with Robert Lighthizer, U.S. trade representative. Wacker said he was optimistic the visit would help the United States and China resolve their 18 month old trade dispute.

Hanging in the balance of the United States and China normalizing trade, Montana has a $200 million beef sale agreement with China’s online grocer, JD.com, which comes with a $100 million investment in a Montana packing plant. Wacker holds the memorandum of understanding on the deal.

Face your financial anxiety by reframing your relationship to money

How to cut the cost of preventative care

How to cut the cost of preventative care

These are the best tips and tricks for donating to charity

These are the best tips and tricks for donating to charity

How to make room for fun in your monthly budget

How to make room for fun in your monthly budget

Montana farmers and politicians are feeling chafed by President Donald Trump’s dismissive remarks about U.S. sales to Japan, a major market for the state.

As Japan struck a multinational trade agreement in principle Thursday with the European Union, farmers in Montana watched from the outside wit…

As United States senator from Montana, and as a rancher from Miles City serving as the president of the Montana Stockgrowers Association, we t…

Earlier this year, the United States Department of Agriculture required ranchers moving their livestock across state lines to implant their animals with an electronic chip to track them throughout the process, arguing that such a program would make it easier to understand the origin of disease and defects.

We currently have a trade agreement with Canada and Mexico; it is called NAFTA. Without needed fixes there is no reason to approve USMCA.

In response to House Speaker Nancy Pelosi’s (D-Calif.) announcement the U.S. House of Representatives will consider the United States-Mexico-C…

Passage of USMCA gets mixed reviews from Montanans

House approval of the NAFTA reboot has been welcomed as a success by Montana lawmakers and given mixed reviews by farmers and ranchers.

Lenci Sickler, a fifth-generation farmer who oversees more than 10,000 acres in western North Dakota, stops short of saying whether farmers in…

We’ve reached a pivotal moment for Montana farmers and ranchers, as three critical trade deals are finalized and implemented. The benefits her…

Leaders of Montana agriculture organizations applauded the U.S. Senate last week for passing the update of a 25-year-old trade treaty between … 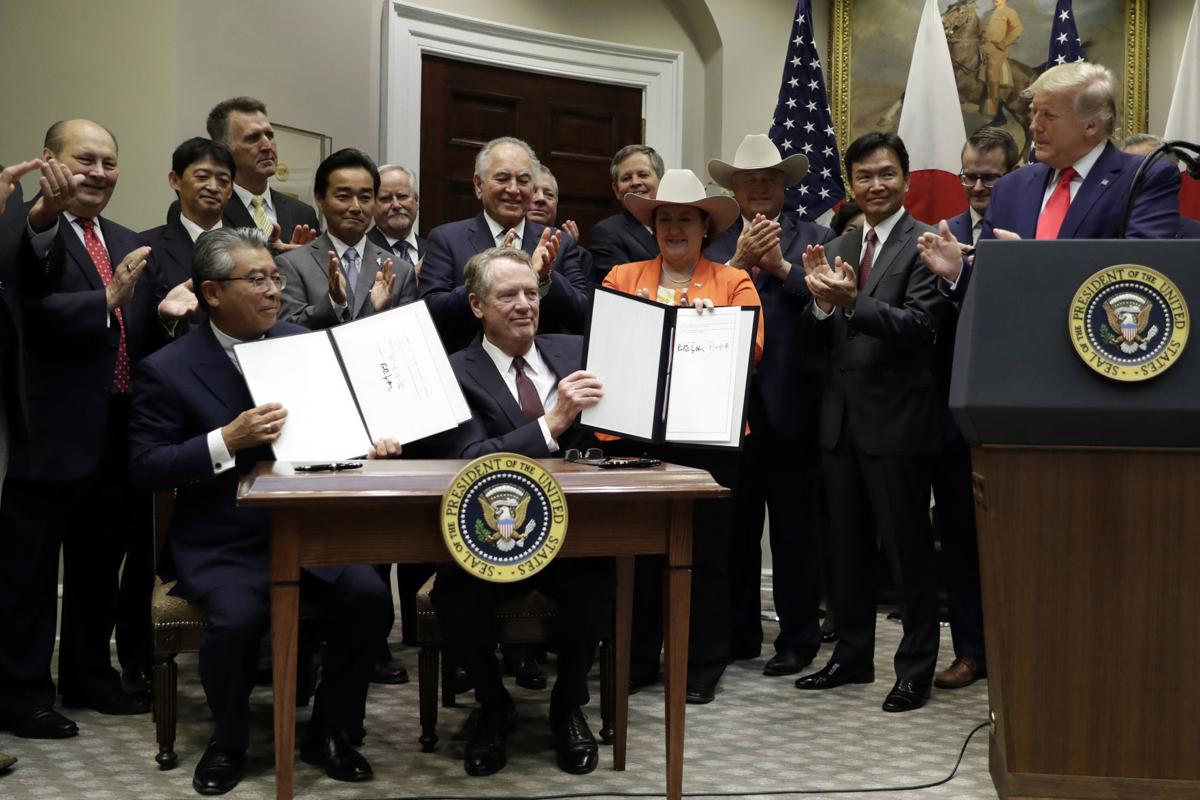 President Donald Trump applauds after Japanese Ambassador to the United States Shinsuke Sugiyama, left, and U.S. Trade Representative Robert Lighthizer sign a trade agreement in the Roosevelt Room of the White House, Monday, Oct. 7, 2019, in Washington. Among those assembled for the signing were Fred Wacker, president of the Montana Stockgrowers Association, three to the left of Trump; and Montana Sen. Steve Daines, five to the left of Trump. 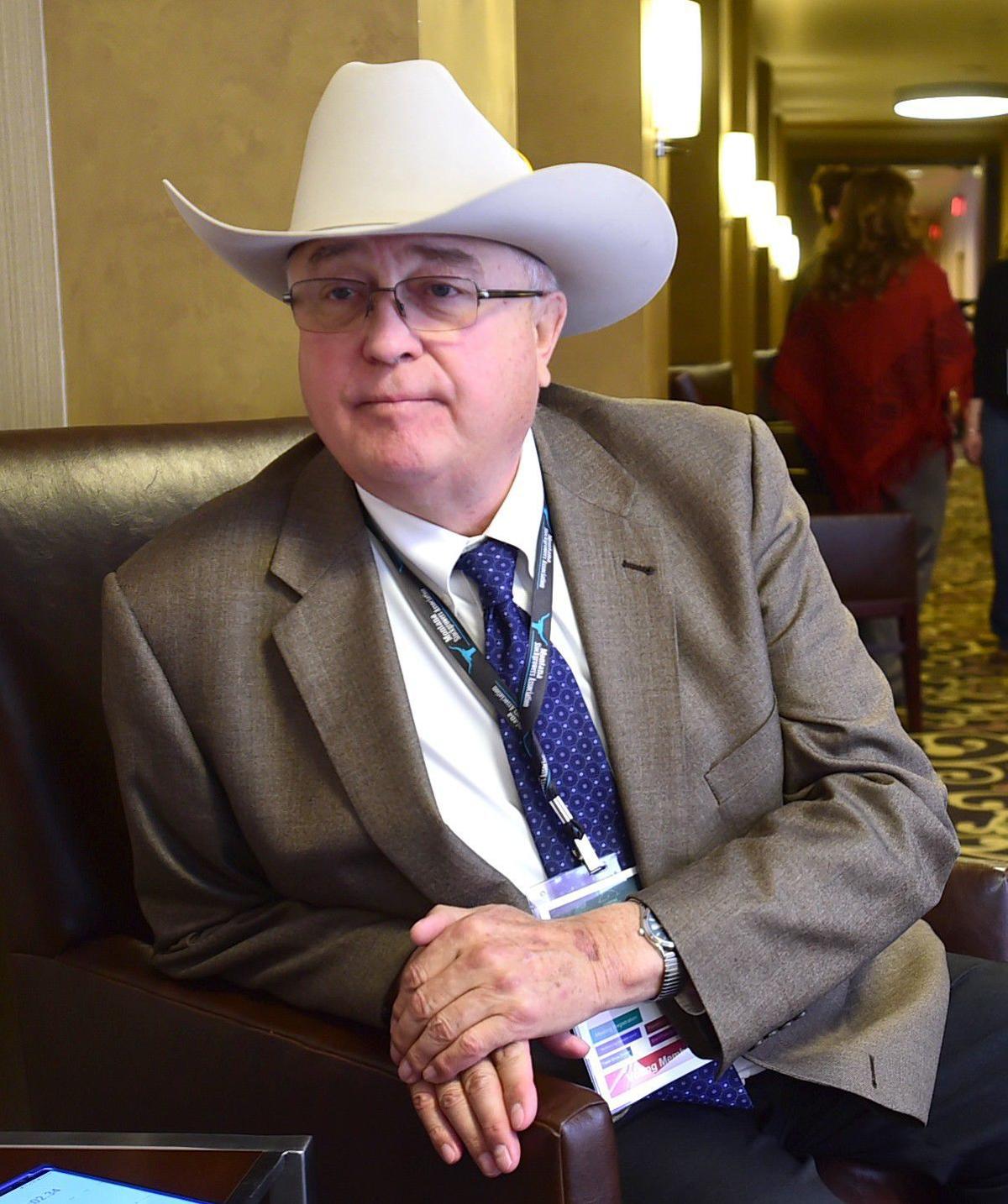 Fred Wacker, president of the Montana Stockgrowers Association, is seen in this 2018 photo.