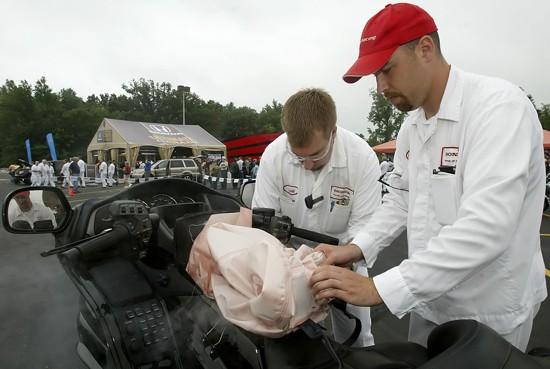 Honda associates Ladd Gabriel, left, and Mike Stierhoff clean up the airbag in a Honda Goldwing motorcycle after it was deployed during a demonstration in Marysville, Ohio. As cyclist injuries and deaths increase, motorcycle makers are installing more safety features, making greater use of anti-lock brakes and adding air bags. But some people wonder how effective air bags will be, how much of a market exists and how much they would save cycle owners on insurance. 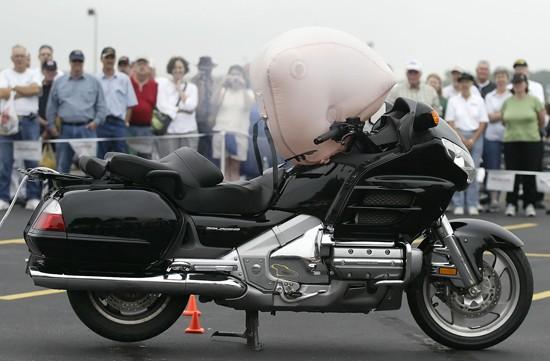 The airbag in a Honda Goldwing motorcycle deploys during a demonstration.
The Associated Press

MARYSVILLE, Ohio - Jeaneen Parsons' husband steered their motorcycle to the ground seven years ago to avoid hitting a passenger whose cycle went down on a twisting mountain road in Kentucky.

The couple emerged from the accident with a few road burns and frazzled nerves. The passenger's leg was shattered.

Marifran Mattson lost part of her left leg when the motorcycle she was on was struck by a semitrailer in 2004 near Crawfordsville, Ind.

Pittsburgh Steelers quarterback Ben Roethlisberger was seriously injured June 12 when a car turned into the path of his motorcycle June 12. Roethlisberger, who wasn't wearing a helmet, suffered a concussion, broken nose and jaw, and damaged teeth.

As cyclist injuries and deaths increase, motorcycle makers are installing more safety features - making greater use of anti-lock brakes and adding air bags while stressing safe-rider education and use of helmets.

Some people wonder how effective air bags will be, how much of a market exists, and how much they would save cycle owners on insurance.

Honda Motor Co. added air bags in June to its fully loaded Gold Wing, an 860-pound touring bike designed for distance driving in comfort and made near this central Ohio city.

Yamaha Motor Corp., with U.S. headquarters in Cypress, Calif., is developing an air bag system and is using a scooter with air bags for research in Japan, according to the company's Web site.

"The motorcycle manufacturers are engaging in a lot of R&D in the area of - some would call it safety, some would call it risk management," said Tom Lindsay, spokesman for the Pickerington, Ohio-based American Motorcyclist Association. "It's part of a trend."

Motorcycles accounted for 2 percent of all registered vehicles in 2004 but made up 9.4 percent of all highway deaths, nearly double the 5 percent in 1997, according to government statistics.

Honda's air bag system consists of crash sensors attached to the front fork of the motorcycle. The sensors detect rapid deceleration and send the information to a small on-board computer, which determines whether a crash is occurring.

The computer sends a signal to an inflator, which releases nitrogen gas to deploy the air bag, packed into a dashboardlike module in front of the driver. The process takes a fraction of a second.

The system is designed to keep the driver's body from hitting whatever the motorcycle hit and reduce the chances of the driver being thrown over the handlebars. It is not designed to protect from side or rear impacts or to protect passengers.

Honda began working on its air bag system in 1990 after determining that more than half of the motorcycle accidents that result in deaths or injuries occur when the front of the motorcycle strikes another vehicle or object.

Honda won't say how many air-bag-equipped Gold Wings it plans to produce by the time the 2006 model year ends in late September, other than it will be a limited number.

Last year, the 600 workers at the plant produced 60,524 motorcycles, including Gold Wings.

Mattson, associate professor of communications at Purdue University, where she is spearheading a motorcycle-safety campaign, also applauds Honda but said the air bags wouldn't help in many crashes, including the one she was in. And she worries that the air bags might cause riders to dispense with wearing helmets.

"I'm concerned this might send a false sense of security," she said.

Honda officials acknowledge that some people are going to question whether motorcycle air bags will be effective.

"But we've seen so many test videos - you become a believer," said Jan Gansheimer, senior manager of Honda's manufacturing/planning group.

Testing out the product

Honda's air bag system has been tested with crash-test dummies and in one case with a human to see what would happen if an air bag deployed accidentally.

Honda officials said the air bag didn't knock the driver backward or injure him, affect his field of vision or impact his travel down the highway.

Bob Hartwig, chief economist for the New York City-based Insurance Information Institute, said the insurance benefits of having motorcycle air bags probably would be small because the devices protect only the driver and only in frontal crashes. Air bags in cars protect drivers and passengers in front and side crashes.

Hartwig also said motorcyclists who buy air-bag-equipped bikes are probably safer drivers and less likely to be involved in crashes.

Safety has also gone beyond air bags and helmets. Worldwide Riders, a Cheyenne, Wyo.-based motorcycle accessories company, sells vests with protective bladders that inflate as riders are being ejected from their motorcycles.

Harley-Davidson Motor Co., based in Milwaukee, emphasizes training and driver education. The company began opening motorcyling academies in 2000 to train new and experienced riders. About 90,000 riders have taken courses at the schools, which operate in more than 30 states.

Jake Balzer, an analyst with Guzman & Company, an investment banking firm, said there may be somewhat of a market for air-bag-equipped motorcycles, but he questioned whether Honda will sell that many unless states require motorcycles to have the devices.

"A lot of people riding motorcycles don't even want to wear helmets," he said. "I don't see them going out and spending the extra money to put air bags on their motorcycles."

Tim Buche, president of the Motorcycle Industry Council, said many motorcyclists love new features and will be attracted to air bags.

But he said the market will determine whether the idea will spread.

Copyright © 2006 Associated Press. All rights reserved. This material may not be published, broadcast, rewritten, or redistributed.

How to fill in your financial blind spots

Also, check out more of the week's best financial tips from experts at NerdWallet, Forbes and the Motley Fool.

Montana State University Billings is pleased to announce Sep Eskandari, Ph.D., has been selected as provost and vice chancellor for academic a…

Former President Donald Trump won’t return to Facebook — at least not yet.

US job growth slows sharply in sign of hiring struggles

WASHINGTON (AP) — The recovery of America’s job market hit a pause last month as many businesses — from restaurants and hotels to factories and construction companies — struggled to find enough workers to catch up with a rapidly strengthening economic rebound.

That money you donated to a GoFundMe? It probably isn't tax-deductible

GoFundMe estimates that an American has started a COVID-related fundraiser on its site every two minutes since March 2020. But donors shouldn't assume their contributions are tax-deductible.

Honda associates Ladd Gabriel, left, and Mike Stierhoff clean up the airbag in a Honda Goldwing motorcycle after it was deployed during a demonstration in Marysville, Ohio. As cyclist injuries and deaths increase, motorcycle makers are installing more safety features, making greater use of anti-lock brakes and adding air bags. But some people wonder how effective air bags will be, how much of a market exists and how much they would save cycle owners on insurance.

The airbag in a Honda Goldwing motorcycle deploys during a demonstration.
© Copyright 2021 Billings Gazette, 401 N Broadway Billings, MT | Terms of Use | Privacy Policy
Powered by BLOX Content Management System from TownNews.com.
You don't have any notifications.