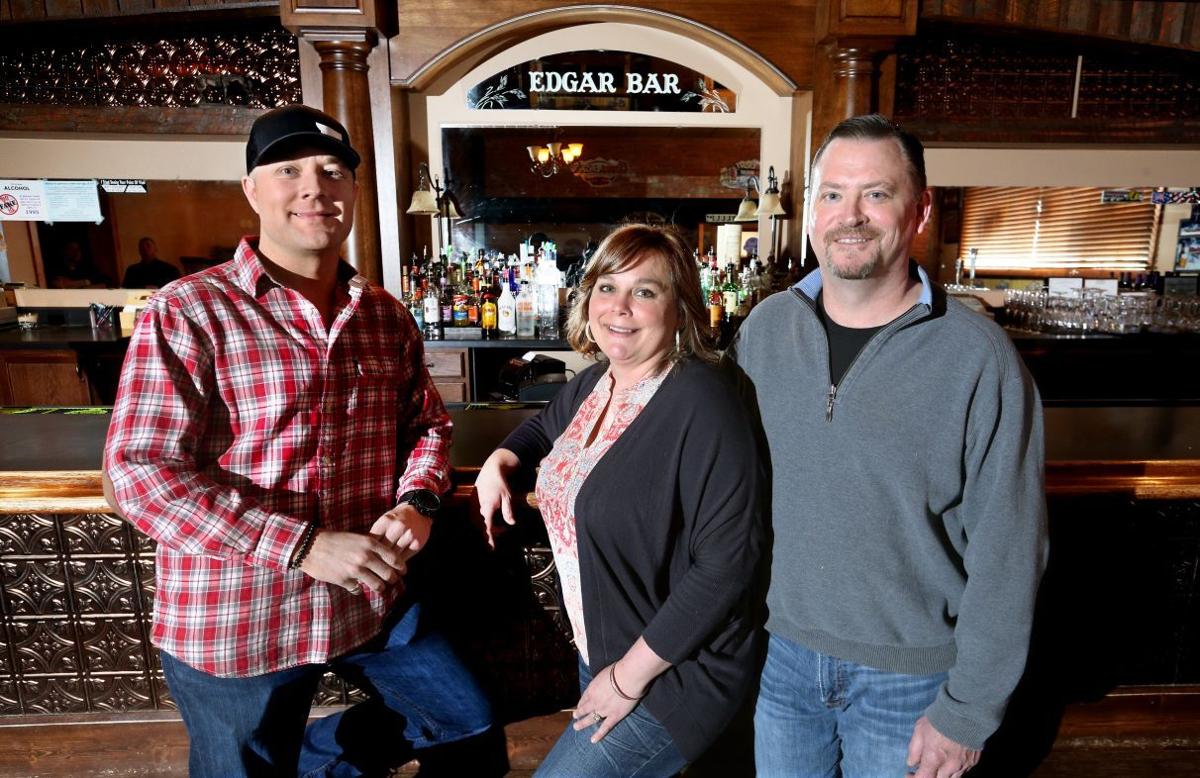 Tyler Samson, left, and Kim and Scott Feldkamp are the new owners of the Edgar Bar. The sale closed on March 20. The business is scheduled to reopen on March 29. 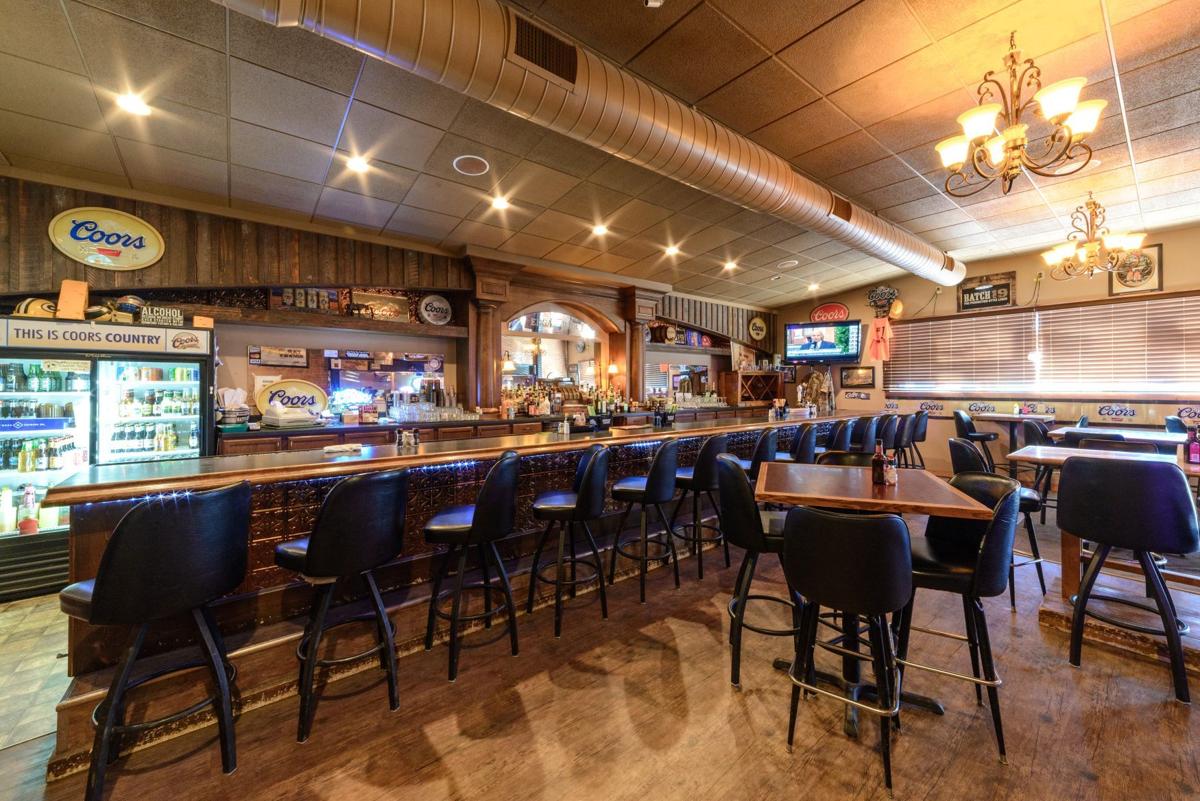 The Edgar Bar seats about 100 and is under new ownership. It's scheduled to reopen on March 29.

Tyler Samson, left, and Kim and Scott Feldkamp are the new owners of the Edgar Bar. The sale closed on March 20. The business is scheduled to reopen on March 29.

The Edgar Bar seats about 100 and is under new ownership. It's scheduled to reopen on March 29.

EDGAR — The three new owners of the Edgar Bar all live in Billings now, but their roots lie in small communities that dot the Montana plains.

Tyler Samson is from Huntley, a proud Red Devil. Scott Feldkamp grew up in Cut Bank near the Canadian border, and his wife, Kim Feldkamp, is a product of Colstrip and the daughter of a coal miner.

In other words, they know small-town Montana, the people, the rhythms and the feel. They have a kinship with places like tiny Edgar in rural Carbon County, population 114, and they say they want to run the bar in the image of its community.

“What we want to do is maintain the rural Montana steakhouse feel. That’s what we grew up with,” said Scott Feldkamp, 47.

The Feldkamps and Samson bought the Edgar Bar from the Helzer family, local farmers who’d owned the place since 2003. The three new owners operate the business through Beartooth Restaurant Group LLC and are working with an investor. The price of the sale was not released.

The sale and the business closed on March 20. It's scheduled to reopen Tuesday under the new ownership.

“We want to keep the tradition going. The Helzers basically built a legacy here, and we want to continue their legacy,” Samson said.

The new owners bring new experience to an old institution. The Feldkamps spent 17 years in St. Louis, where they were managing partners of LongHorn Steakhouse and Hoolihan’s franchises, both popular Midwestern chains.

Scott Feldkamp, the new head cook in Edgar, met Samson while working at Walker’s Grill in downtown Billings. They plan to add a few things to the menu, such as a vegetable dish, but also will stick with the basics.

The Edgar Bar dates back to the Great Depression era, when the town was a hub on the Northern Pacific rail line. Over the years, the bar has been a theater and a grocery store and always a central part of the town, according to matriarch Brenda Helzer.

In 2010, the Helzers renovated the business, adding a new bar, bathrooms and modernizing the look.

The Edgar Bar became a destination for travelers and Wyoming residents, and those people became familiar faces to the family and employees, Helzer said last week.

“It became a destination because (people) felt welcome. From big groups, to small groups, to a guy who wants to go fishing and get a burger,” she said.

Edgar is about 34 miles southwest of Billings off Highway 310. The unincorporated town is about six miles north of Fromberg in the shadow of the Pryor Mountains.

Brenda Helzer co-owned the bar with her husband, Bryan Helzer, and their daughters Mariah Roberts, Morgan Helzer and Melanie Cameron. Stuart Cameron, Melanie’s husband, was also part of the business.

The family is moving to Wyoming to farm, but the Edgar Bar is in good hands with the new ownership, Brenda Helzer said.

“They understand the small-town dynamic. I think it’s going to be well received. They’re going to follow a lot of our traditions in there, and start some of their own,” she said.

Samson, 32, a commercial broker for NAI Properties in Billings, said some changes are underway, designed mostly to improve operations.

The new owners are installing a new point-of-sale system to replace the old cash registers, new carpets and new tables and chairs. They’re hiring three new employees for a total of 10.

The Feldkamps are also moving from Billings to Edgar to manage the bar and restaurant. Samson said he’ll also be a regular presence, though he’s still selling commercial real estate.

Edgar Bar is at 105 Elwell St., though an address isn’t needed to find anything in this downtown. The post office is a block away and a couple other businesses that serve the ag community are nearby.

The exterior facade of the building is simple brick, and the retro sign with a dated Pepsi logo belies the rustic look inside. The bar seats about 100 and has a natural gas fireplace in the corner.

Pictures of the buckskin-colored Coors Original can and bottle dot the walls of the Edgar Bar, including a sign on the front door declaring “This is Coors Country.”

The decor is unlikely to change: Farmers in the area grow barley that goes into Coors, and the bar will continue to support them, Samson said.

The Edgar Bar will still feature steaks and jumbo shrimp, and the outdoor patio will remain a place for live music. These traditions will remain the same.

“It was successful for a reason, so why change it?” Kim Feldkamp said.

Faded Rockvale restaurant and bar to get new life, owner

ROCKVALE — It’s one of the first questions people ask Cody Hoefle when they find out he’s buying the Fort Rockvale Restaurant and Casino.

Eateries that opened (and closed) in Billings 2016

Have You Heard: Coffee collective coming to downtown Billings