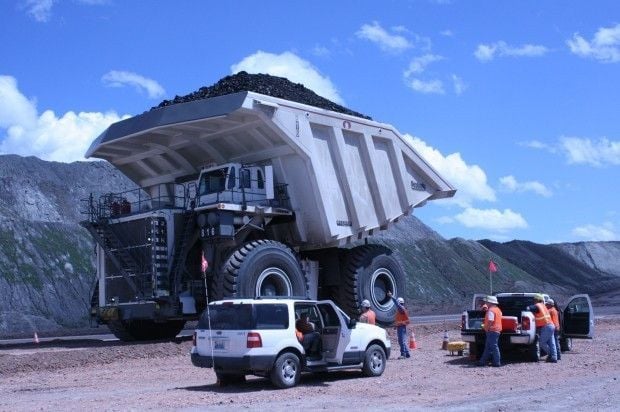 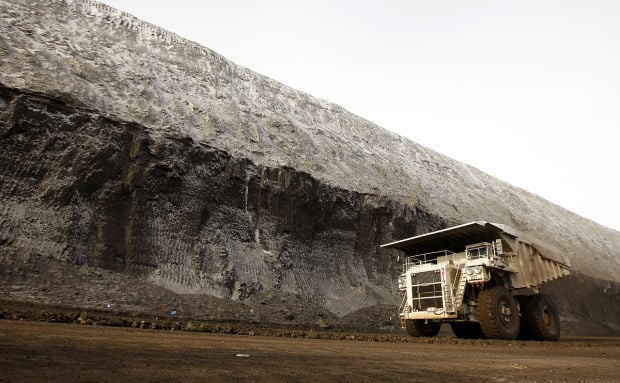 A coal truck is dwarfed as it rumbles along the high wall of a coal pit in February 2015 at the Black Thunder Mine.

Benjamin Storrow For The Gazette

Peabody Energy cut 235 people at North Antelope Rochelle, or 15 percent of the workforce at America's largest mine. Arch Coal said it was cutting 15 percent, or 230 people, at its Black Thunder Mine near Wright.

The news comes in the face of an extended downturn in the coal markets and amid a rising tide of environmental regulations. It also marks a new chapter for Wyoming's coal industry, which has largely avoided the massive cutbacks seen in Appalachia and elsewhere.

The layoffs are notable as they come at what are generally reckoned to be the largest and most cost effective mines in the country. North Antelope Rochelle and Black Thunder generally mine around 100 million tons of coal annually.

"While our asset position and contracting strategies give us relative strength, we are taking these actions to match production with customer demand," said Kemal Williamson, Peabody president for the Americas. "We regret the impact of these actions on our employees, their families and the surrounding communities in the Campbell and Converse County areas."

A Peabody spokeswoman said the layoffs were effective immediately, adding that the company is taking steps to "ease the transition through severance and outplacement support."

Logan Bonacorsi, an Arch spokeswoman, said the company's decision to cut roughly 230 positions at Black Thunder, was a result of the ongoing weakness in the thermal coal market.

The company has made efforts to reduce mining costs and improve efficiencies, but the slack market necessitated additional cost cutting measures, she said.

Black Thunder employees were being informed of the news Thursday morning. Employees there will be offered a severance package including transitional medical coverage.

“We regret the need for this difficult step and the impacts it will have on our employees, their families and the local community,” said Keith Williams, Arch’s president of western operations. “We have made every effort to preserve as many positions as possible, and this decision was made only after a number of other cost-cutting measures were exhausted. We deeply value the hard work, professionalism, and significant contributions of the employees who have been affected by this reduction in force. We want to thank the employees for their years of faithful and dedicated service to Black Thunder.”

Spokeswoman for both companies said the announcements were not coordinated.

The twin announcements mark a new chapter in coal's bust. A series of major mining firms, including Alpha Natural Resources and Arch, have filed for bankruptcy protection in recent months, their balance sheets sunk by the combination of utilities' appetite for cheap natural gas, massive coal stockpiles at power plants nationwide and debts incurred during better times.

And yet layoffs in the Powder River Basin have been relatively limited. Smaller mines producing lower quality coal like Kiewit Corp.'s Buckskin Mine and Peabody's Caballo and Rawhide facilities have announced layoffs.

Such efficiencies offer only so much protection, however. Thursday's announcements represent the first major layoffs at the large mines in the basin.

"You’re talking about good, good mines," said Bob Hodge, a coal analyst at IHS Energy. "In the east, if you wanted to point a finger at a villain it would be the EPA. I think in the PRB the biggest villain is natural gas."

An unseasonably warm winter has only furthered coal's suffering. Peabody officials noted 2016 heating degree days — those when the temperature falls below 65 degrees Fahrenheit — are 17 percent below 2015 levels year-to-date. March heating degree days are down 30 percent against their 10-year average.

The relatively balmy weather has resulted in a drop in coal shipments.

Weekly shipments from western U.S. mines fell below 7 million tons for the second consecutive week, the U.S. Energy Information Administration reported Thursday. Shipments for the week of March 26 were 6.6 million tons, a slight increase over the week before, but a sharp decrease from the more than 10 million tons shipped at the same time last year.

The declining market conditions have left Peabody laboring to stay out of bankruptcy. The company, in a financial filing Wednesday, said it had extended negotiations with Bowie Resources LLC over the sale of three Peabody mines in Colorado and New Mexico.

The deal is crucial to Peabody's efforts to raise enough cash to stay out of bankruptcy.

Bowie had agreed to buy the mines for $385 million, but has been unable to secure financing to complete the deal. The agreement included a break-up provision, under which Peabody would receive $20 million if the deal fails to go through.

In a filing with the U.S. Securities and Exchange Commission, Peabody said both firms had waived their termination rights under the agreement until April 7.

Peabody invoked a 30-day grace period on a $71 million interest payment earlier this month. The grace period ends on April 14.

Don't say these things during a job interview

Don't waste money on these items

Don't waste money on these items

Little ways to help free yourself from debt

Little ways to help free yourself from debt

Numerous efforts to squeeze clean-burning fuels from coal have hit the drawing board ever since OPEC started flexing its muscles in the 1970s.

A Montana oil refinery says it will lose a key power supplier if Colstrip is shuttered.

Wyoming coal mines have largely resisted layoffs. But how long will that last?

LANDER, Wyo. — Wyoming’s coal mines have proven resilient employers, even amid a historic downturn that has prompted two of the state’s larges…

LANDER, Wyo. — Mine closures are unlikely as a result of the Obama administration's decision to temporarily halt new coal leases on federal la…

A coal truck is dwarfed as it rumbles along the high wall of a coal pit in February 2015 at the Black Thunder Mine.