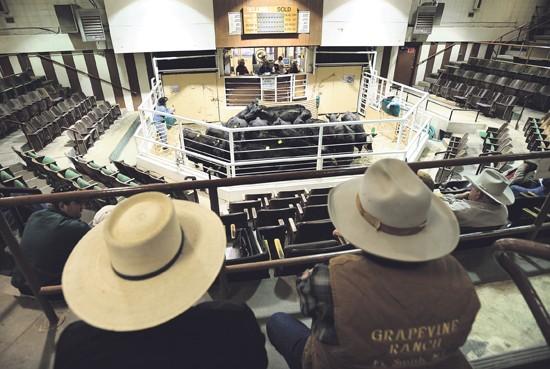 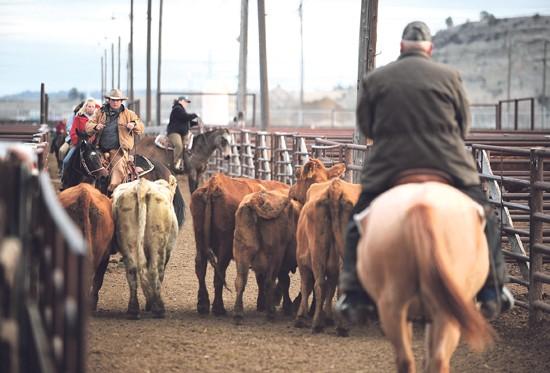 Riders sort cattle sold in the stockyard at P.A.Y.S. Prices for feeder calves have dropped by 15 to 20 cents per pound. This could cost many ranchers a $9,000 to $15,000 loss in profits compared to last year. 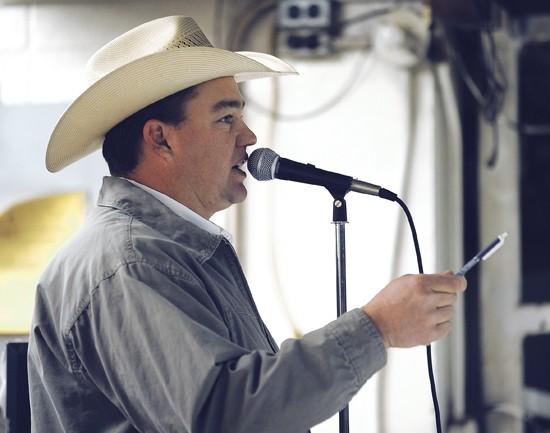 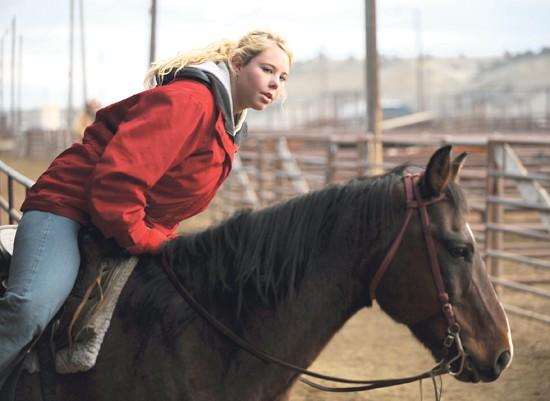 Robin Albright watches as bulls are released from the sale pen at PAYS, the Public Auction Yard in Billings. Albright sorts cattle in the stock yard.

PAYS, the Public Auction Yards in Billings, is seeing large sales as cattlemen sell cattle before winter.
TOM LUTEY Of The Gazette Staff

The fat cattle of Twin Coulee Ranch come down from the Snowy Mountains' high plains each fall just before Greathouse Peak, south of Lewistown, whitens and shade settles into the area's tight draws for a long winter.

The black Angus, numbering more than 300, travel to Twin Coulee, three days away by wagon on the bare grasslands 25 miles northwest of Lewistown. The two settings are so pastoral, so seemingly disconnected from urban culture, that when ranch owner Art Nelson moves his spring stock he charges townies $200 a head to come along for the ride.

But big-city financial troubles are kicking up dust this fall on Nelson's gravel road. Twin Coulee had to cancel its traditional Oct. 1 sale after uncertainty in America's financial markets began seeping into the cattle industry.

Prices for feeder calves - calves sold to feedlots for months of fattening before being slaughtered - are 15 to 25 cents per pound lower than they were last year. Those pennies add up for a rancher selling a hundred feeders in the 500- to 600-pound range. That rancher will take home $9,000 to $15,000 less than he did a year ago.

"It's kind of slippery right now," Nelson said. "The market is pretty tough. We're down on the calves and stuff at least 20 cents and our overall costs have gone up so much. There's just not a lot of room left on these cattle."

When Nelson speaks of "room," he means margin for profit, the difference between what it costs to raise a calf and what the animal might sell for on the market.

Profit margins have been shrinking because feed and fuel costs through most of the year were at historic highs. Those high prices, which drove the cost of raising one calf to about $450, were only manageable if sale prices also rose.

But as the U.S. economy faltered this fall, so did market prices for slaughter-bound cattle. That caused a domino effect in which every bit player leading up to the slaughterhouse was suddenly willing to spend less for cattle.

Nelson decided he'd wait to sell his cattle until the beef market improved. And he's still waiting, as are other ranchers capable of paying their bank loans without selling their livestock at low prices. Ranchers, who normally send their livestock to market in October and can no longer wait for a sale, are flooding auction yards with beef.

Not all the late activity represents ranchers waiting for the market to pick up, said Gary Brester, a beef economist at Montana State University in Bozeman. There were ranchers across the state who sold their cows on contract earlier this year for a good price. Buyers behind those early contracts made down payments for cattle under agreement that they'd pay the rest of the money in the fall.

But when fall came and beef prices began to falter, those early buyers grew nervous about their locked-in payments. Unsure they could turn the contracted calves around for a profit, the buyers forfeited their down payments and sent the ranchers searching for different buyers in a much tighter market.

It all goes back to consumer demand, Brester said. Simply put, beef processors, the ones at the end of the supply chain that put meat in the grocery stores, are nervous about how much beef Americans will buy in a struggling economy and how much consumers are willing to pay. Those worries ripple outward to feedlots and ultimately to ranches.

"The main thing is the feedlots are trying to figure out a point where they can make some money," Brester said.

Feedlots owners are watching the price that slaughterhouses are willing to pay for fattened beef drop faster than the cost of the corn and other feed ingredients on which feedlots rely. The resulting profit margin is much smaller than it was previously.

The sheer number of cattle now scrunched into the marketplace only makes things more difficult for sellers.

"What happens with the value when you get scrunched up in a short time period is the buyers can be more selective," said Rob Fraser, owner of Miles City Livestock Commission. "It's competitive. They can ask for and purchase what they really want, which is preconditioned calves."

In other words, buyers want the sure bet: calves that are ready for feedlot life, calves that already know how to eat from a trough, drink from waterers, have been vaccinated and aren't likely to become sick while their new owner fattens them up for slaughter. Those animals tend to put on weight better in the feedlot, and they have already had a taste of feedlot food, which is different from the pastureland diet. Preconditioning calves costs money, but so does selling an unconditioned calf in a saturated market.

Nelson has his young calves in a Billings feedlot now, getting them used to the next phase of their lives. He'll try to sell them again in December. He'll likely make less money per pound on the cattle, but overall he hopes to make more because the calves may gain more than 100 pounds.

There are bright spots in the livestock industry, said Jon Paterson, director of the Montana Beef Network. Corn prices are dropping, which won't help the profit margins of this year's ranchers but may loosen things up for feedlots. The price of fuel has dropped. Those are two legs of a three-legged stool that could be stable if American consumers keep buying beef.

But the prospects of consumers continuing to buy beef without a drop in price aren't good, Brester said. It isn't a good sign when publications like Parade magazine report that Americans are already buying less beef. Another side effect of tighter household budgets is that people don't travel as much. Travel plays a big role in beef consumption, Brester said, because people not only eat out more often when they're on the road, they also tend to eat more beef.

At least ranchers haven't increased the volume of cattle raised in the United States for several years, Brester said. There may be a lot of beef on the market now, but it's more of a bulge in the pipeline than a long-term trend.

At the Twin Coulee Ranch, Art Nelson is preparing for the first December beef sale in the ranch's 113 years.

He's hopeful that the financial markets will thaw and free up credit lines for his potential customers, feedlot operators who borrow millions to do business effectively. Those would-be buyers weren't in the best shape for Twin Coulees' scheduled sale Oct. 1, the day the U.S. Senate was haggling over a $700 billion bailout for the U.S. financial sector teetering on disaster. In December, maybe things will be different. Now that feed prices have finally fallen and diesel is half the price it was less than five months ago, Nelson is ready to roll the dice.

"It's a gamble, that's what it is," Nelson said. "This is the first year of my life that corn prices dropped, oil dropped and cattle followed them right down."

6 steps to higher net worth: A year-end financial checklist

Here are six easy-to-implement steps to help boost your net worth going into the new year. Plus, check out more personal finance tips from experts.

Webb joins Board of Trustees for Community Seven Television

Long-time teacher and journalist, Jaci Webb, has joined the board of trustees for Community Seven Television. Webb serves as director of stude…

TDS donates $5,000 to the Education Foundation for Billings Public Schools

The retail landscape is still chaotic, so it’s hard to tell which products (if any) will be listed at an affordable price point this month. Here are some tips.

What's in your wallet? If you're a Capital One customer, it might soon be more money.

4 Questions to Ask Yourself Before Investing in Shiba Inu

Don't put your money on the line without understanding the risks.

Don't Own These 10 Stocks? Then You're Probably Underperforming the Market

Without Nvidia, Tesla, and others, market underperformance is almost inevitable.

UK court backs Meghan in dispute over privacy with publisher

LONDON (AP) — The Duchess of Sussex won the latest stage in her privacy lawsuit against a British newspaper on Thursday, when three senior judges ruled its publisher breached her privacy by reproducing parts of a letter she wrote to her estranged father.

Riders sort cattle sold in the stockyard at P.A.Y.S. Prices for feeder calves have dropped by 15 to 20 cents per pound. This could cost many ranchers a $9,000 to $15,000 loss in profits compared to last year.

Robin Albright watches as bulls are released from the sale pen at PAYS, the Public Auction Yard in Billings. Albright sorts cattle in the stock yard.