The Mayhem Poets — from left, Kyle “Black Skeptik” Sutton, group founder Scott Raven and Mason Granger — formed on the campus of Rutgers University and have toured steadily for seven years. 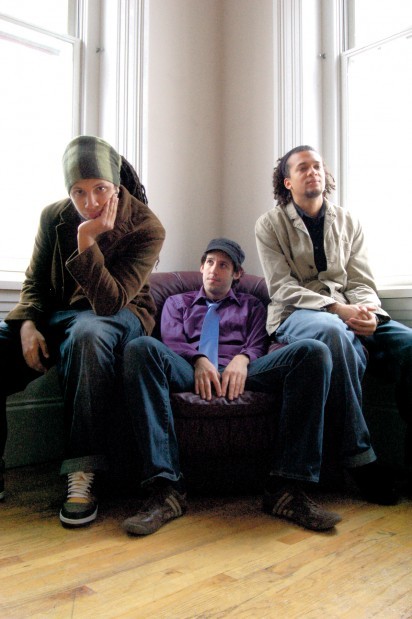 From left, Kyle Sutton, Scott Raven and Mason Granger are members of The Mayhem Poets. The New York-based group will perform Tuesday at the ABT. (Courtesy photo)
JACI WEBB Of The Gazette Staff

The late Allen Ginsberg shared that advice with the world decades ago. And now, a group of New York City performance poets is following Ginsberg’s direction, bringing its brand of beat-box madness to the masses.

These three and sometimes four poets take on issues of race, love, trash, food fights and boundaries all in a rapid-fire rap often enhanced by a violin or beat box or both. Scott Raven, founder of Mayhem Poets, describes it as a combination of theater, hip-hop and stand-up comedy.

“We’re all writers at heart. We hit on various topics that kids may be going through and sugarcoat that with a lot of pop culture references. It can be an outpouring of emotion or conceptual,” Raven told The Gazette in a phone interview.

The poets’ two matinee performances Tuesday at the Alberta Bair Theater will be opened by Billings performance poet David Caserio, Missoula performance poet Linds Sanders and the winner of the Billings Poetry Slam, which will be held Sunday at Venture Theatre.

Founded a decade ago when Raven was a student at Rutgers University, Mayhem Poets performed in a tiny apartment and later the women’s center at Rutgers before they all graduated and took their act on the road.

“We’d get chess club members, volleyball players, everybody was coming to this open-mic night,” Raven said. “We decided this is what we want to do with our lives.”

The open-mic night they started at Rutgers is still going, and the Mayhem Poets occasionally go back as guest hosts. Also performing in Billings are Mason Granger and Mikumari (Reggie Burch).

As the Mayhem Poets, the group has been touring for seven years and quit their day jobs five years ago to become the rare touring performance poets. Raven says they perform anywhere they are invited, from prisons to playgrounds, but mostly in performing-arts theaters for teenagers.

“Poetry is a viable profession. We’re not raising kids yet, but we’re making enough to pay rent in New York City,” Raven said.

Raven said that like other kids, he grew up on Dr. Seuss and Shel Silverstein. As an adult, he admired performances by Saul Williams, a musician who combines hip-hop and poetry and starred in the independent film “Slam.” A jazz club in Chicago, the Green Mill, is credited with popularizing slam poetry starting in the mid-1980s.  Construction worker Marc Smith (Papi) structured a lyrical boxing match pitting poets one on one to be judged by audience. From there, slam poetry caught fire in larger cities such as New York and San Francisco. In New York City, the Nuyorican Poet’s Café in the east village became the Mecca for performance poetry.

In today’s world of YouTube clips and Facebook quips, where sarcasm and news merge, Raven said it’s refreshing that teenagers and college-age students provide such positive feedback to the live poetry experience. Most of the group’s writing takes place during a summer break in touring, but Raven said it’s important to keep the show fresh so they do some “writing on the fly.”

Raven, 29, was a journalism and theater major and Granger was a psychology major in college. Their performance employs all aspects of their college background as well as their interest in other cultures, Raven said.

“We throw in references to when we were kids because the audience understands that,” Raven said. “Diversity is very important to us. When we’re not on tour, we’re on the road traveling to introduce ourselves to different cultures.”

Mayhem perform 200 shows a year, mostly in the U.S., but they have toured Ireland and Canada and hope to tour more internationally. As Mayhem travel, Raven said their conversations are even poetic.

“When we are riding in the car, we’re talking in metaphors and similes without consciously trying to,” Raven said. “I’m always writing. I have 60 little burgeoning poems on my BlackBerry.”

At their shows, the goal is to develop a rapport with the audience.

“You can have a conversation with the people out there if you stay in the moment,” Raven said.

The Mayhem Poets — from left, Kyle “Black Skeptik” Sutton, group founder Scott Raven and Mason Granger — formed on the campus of Rutgers University and have toured steadily for seven years.

From left, Kyle Sutton, Scott Raven and Mason Granger are members of The Mayhem Poets. The New York-based group will perform Tuesday at the ABT. (Courtesy photo)
© Copyright 2021 Billings Gazette, 401 N Broadway Billings, MT | Terms of Use | Privacy Policy
Powered by BLOX Content Management System from TownNews.com.
You don't have any notifications.