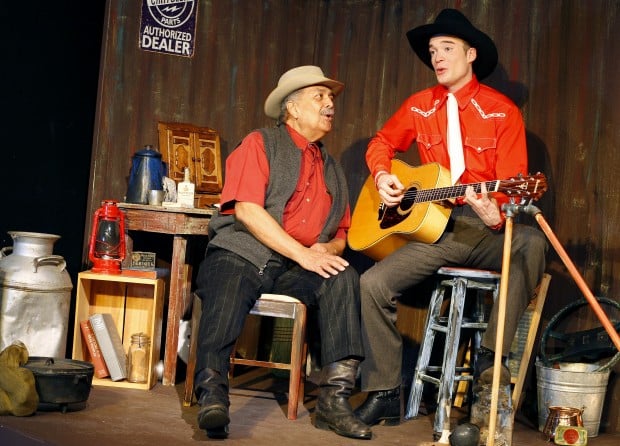 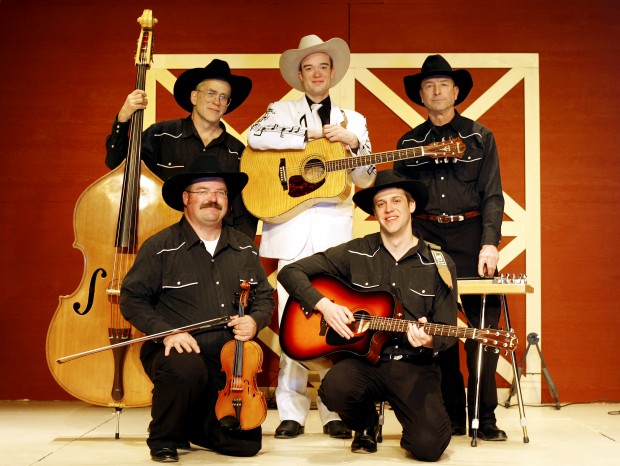 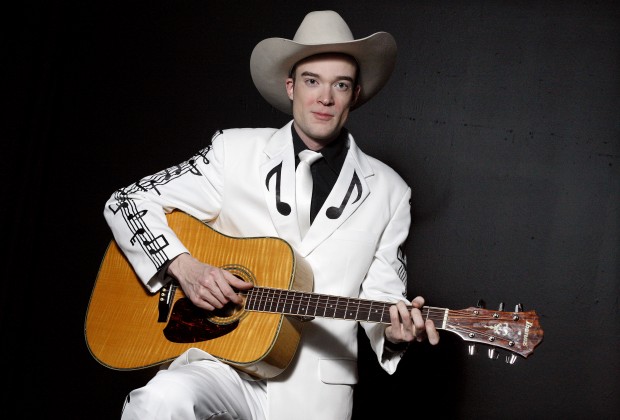 Venture Theatre's production of "Hank Williams: Lost Highway" features Billings musician Steve Brown in the role of a man who rose to country music's zenith only to fall victim to his self-destructive ways.

﻿To see Billings musician Steve Brown portray Hank Williams, you’d think he’d been working in theater for years, instead of making his stage debut, because Brown’s got the right combination of ease and swagger to fill those very large boots of Hank’s.

At 27, Brown is only two years younger than Hank when he died of a heart failure. Tall and willowy, with a sunny twang, Brown nails the superstar hillbilly singer in “Hank Williams: Lost Highway” being staged this month at Venture Theatre. On opening weekend, Brown was fighting a cold and still hit Hank’s sincere tones on songs like “I Saw the Light” and “Lost Highway.”

Brown’s been fronting bands since he was at Senior High School, so many people know he can sing. Brown performs in the Sons of Billings and Soul Movers, and this summer he will play a reunion show at Magic City Blues Festival with The Tyler Burnett Band. But he also handles the trickiness of living in Hank’s troubled soul, yet retaining enough of himself to make the lines and lyrics ring true.

“If you want to sing about hard times, you’ve got to get you some,” Tee-Tot advises young Hank early on in the production.

Tee-Tot is Hank’s first and only teacher, a street performer who taught Hank to play blues guitar in exchange for meals. The suggestion from Tee-Tot (Ben Pretlow) turns to prophecy as Hank’s life unravels in the second act of “Lost Highway.” Before the show opened last week, Brown said he knew people would enjoy Hank’s happy days, but hoped the production wouldn’t lose them as Hank becomes a stumbling, troubled drunk in the second act.

“You’ve got that moment to take someone for a ride and you don’t want to waste it,” Brown said. “You have to live in both worlds. You have to be someone else, but be yourself, too. You ride the wave without succumbing to it.”

Brown said he got acting tips from director Sarah Butts, producing director Robert Wood, and another cast member, Daniel Zent, who, like Brown, was exploring new territory in this show. Brown helped Zent, a veteran Billings actor, get comfortable singing as Hank’s bandmate and rhythm guitarist Jimmy, and Zent helped Brown with some acting advice.

“The best performances are the ones where you lose track of time,” Brown said.

Brown started his musical experience as a drummer in grade school, but discovered drummers generally don’t make it as a solo act, so he decided to play guitar and sing.

“The only other thing I wanted to be was a jet fighter, but when my fifth grade teacher shot that down because I wear glasses, all I wanted to do was perform,” Brown said.

In his freshman year of high school, he started performing with bands, playing at school gigs like B-Day. When he was 19, he and his dad, Bob Brown, and friends Parker Brown and his dad, also named Bob Brown, helped found The Tyler Burnett Band, and music became Steve’s life. At 21, Steve performed in front of 4,000 people at Magic City Blues.

“I’ve always been a reluctant front person,” Steve said. “It’s hardest when you’re singing someone else’s songs. Now that I do original stuff with the Sons of Billings, it’s easier because it’s my words and I know how to deliver them.”

In “Lost Highway,” Brown is teamed up with old friends and collaborators John Kemmick (Shag) on slide steel guitar, Doug Haberman (Hoss) on bass, and Ed Pierson (Leon) on fiddle and mandolin.

The actors listened to diction CDs to get the right twang in their speech and Brown said he brushed up on Hank’s story and music before he worked up the courage to audition for the show late last fall.

“My dad has all his music, but I didn’t listen to it much,” Brown said. “I thought Hank was an old guy. I was surprised when I found out he expired at 29. I always felt I had an old soul, but I can’t even hold a candle to what he did in just a few years. What he was doing was singing the blues with a southern hillbilly twang.”

“Lost Highway” is a musical biography that features 22 of Hank’s original tunes. The music drives the show and much of the narrative comes through Hank’s own words, sometimes jubilant like in “Jambalaya (On the Bayou)” and “Settin’ The Woods on Fire.” And, sometimes we crawl into some dark places with Hank. The piercingly sad lyrics on “I’m So Lonesome I Could Cry” feel like a suicide note and Brown hits it just right on this line, “Did you ever see a robin weep when leaves begin to die/Like me he’s lost the will to live/I’m so lonesome I could cry.”

At Hank’s funeral on Jan. 4, 1953, one of Hank’s heroes, Roy Acuff said “No finer boy has ever come or gone.” Then Acuff and a host of iconic country singers, including Bill Monroe, sang Hank’s rousing gospel number, “I Saw the Light.” In life, Acuff warned Hank to slow down, saying he had a “million-dollar voice and a 10-cent brain.”

But the pain Hank endured from his spina bifida led to an addiction to drugs and alcohol. Many said Hank couldn’t handle his success. The puzzling part of Hank’s personality was that while he couldn’t open up in his relationships, he could in his music. Fans were drawn to Hank’s heartache because he poured it out in his music and somehow it filled their voids.

“If an artist never struggled then their art wouldn’t have any truth to it,” Brown pointed out. “I’d like to do Hank justice. He’s done a lot of good for this world.”

Blues with a twang

"Hank Williams: Lost Highway" is playing at Venture Theatre through March 27. Call Venture at 591-9535 for tickets or show times.

Venture Theatre's production of "Hank Williams: Lost Highway" features Billings musician Steve Brown in the role of a man who rose to country music's zenith only to fall victim to his self-destructive ways.
© Copyright 2021 Billings Gazette, 401 N Broadway Billings, MT | Terms of Use | Privacy Policy
Powered by BLOX Content Management System from TownNews.com.
You don't have any notifications.