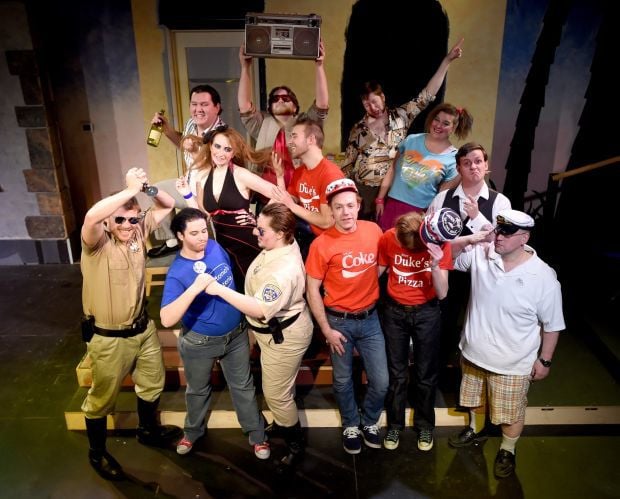 NOVA Center’s production of Shakespeare’s “Twelfth Night” takes a turn into the 1980s with cola-war allegiances and competing pizzerias. 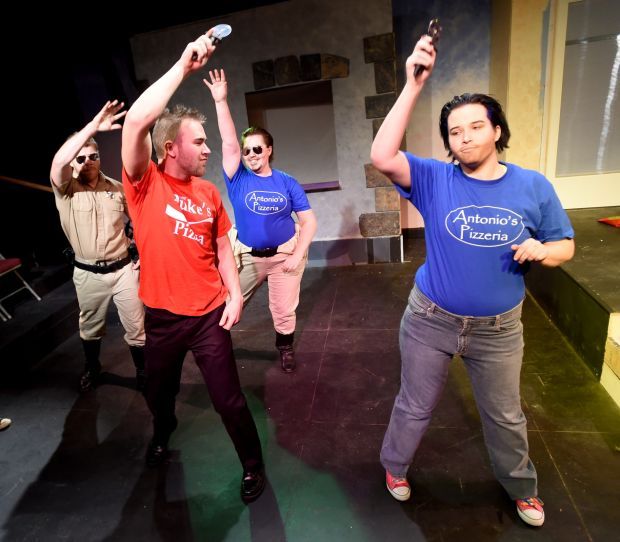 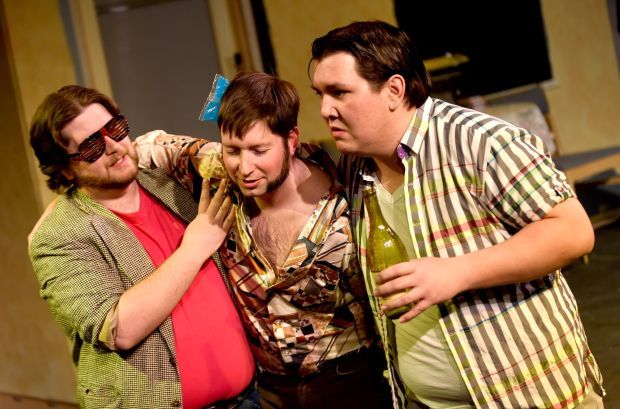 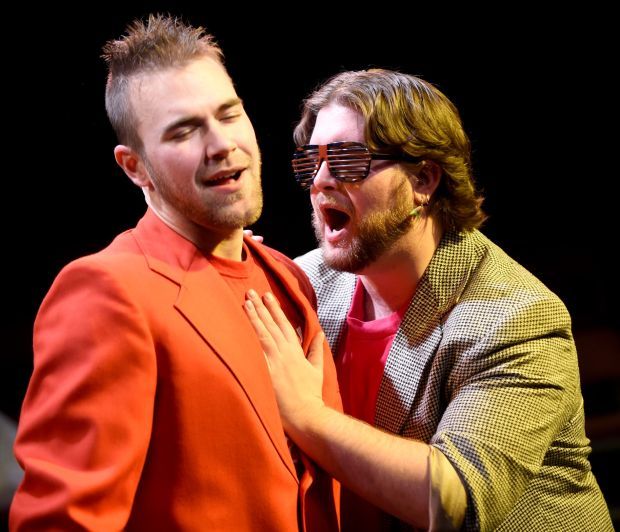 Fashion from the 1980s is on full display in NOVA’s staging of Shakespeare’s “Twelfth Night,” which includes Justin Linder and Richard Leeds, from left. 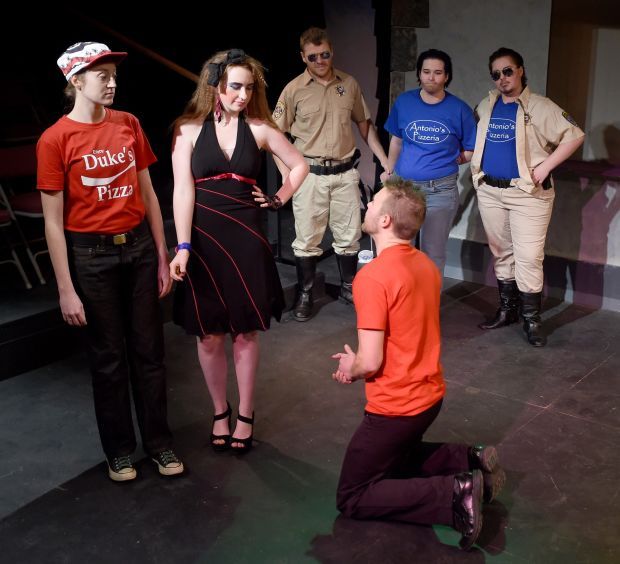 The actors work on a scene inside NOVA’s Black Box theatre. 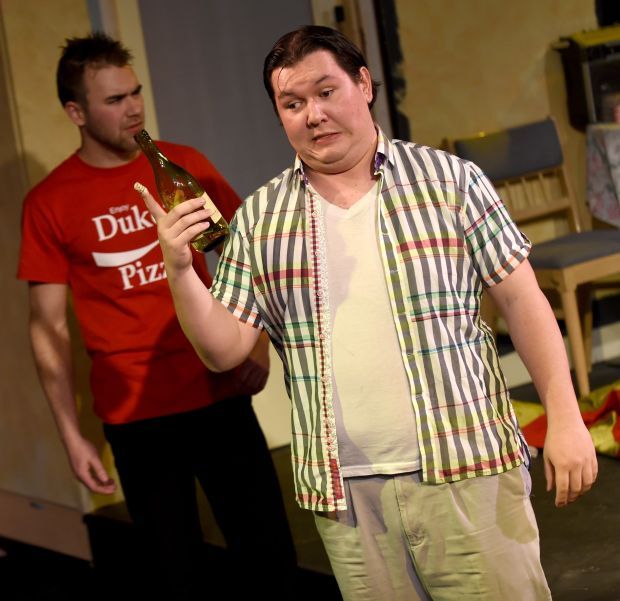 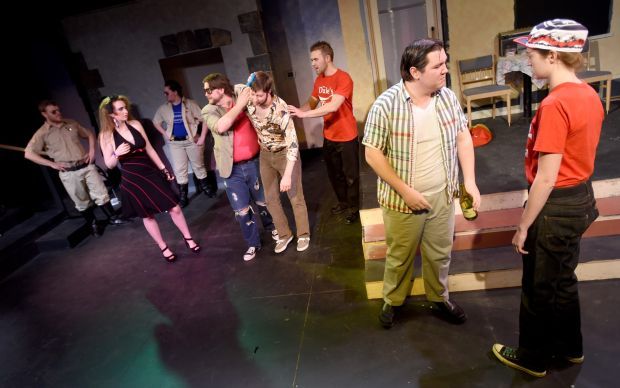 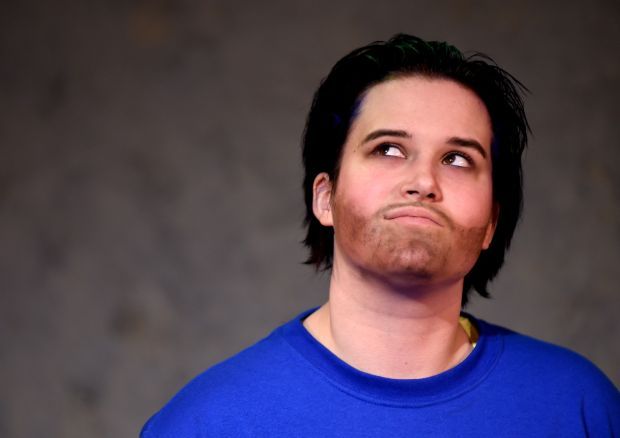 The gender-bending Shakespearean comedy of mistaken identities, “Twelfth Night, or What you Will,” is taking an even stranger turn in the new NOVA production opening Friday.

Director Danielle Turtainen has spent the last eight months bringing an ’80s look and sound to the production, written in the early 1600s, as a way to finish off the Christmas season with laughter. It will be performed in the Black Box at NOVA Center for the Performing Arts through Jan. 31.

Turtainen, who graduated from Rocky Mountain College in 2001 with a theater degree, has performed twice in the comedy, once as the cross-dressing Viola in a London production.

Her London director assigned Turtainen to go out to a pub dressed as a man to see if she could pull it off. She has instructed her actress who plays Viola, Rebecca Spring, to observe the way men walk, sit and talk on the phone to get the movement down.

“Rebecca was stuck in an airport for a few hours,” Turtainen said. “I told her, ‘Go follow some men around.’”

And here’s another novel addition to the show — pizza. Turtainen and a few cast members, who range in age from 19 to 40, remember the synthesized pop music and the soda wars of the 1980s when Pepsi went head-to-head with Coke.

The cast will wear T-shirts in red and blue representing the colors of the soda moguls and identifying them with two warring pizzerias, Duke’s and Antonio’s. During one of the bawdy party scenes, the cast members will walk through the audience handing out fresh, hot slices of pizza, compliments of NOVA’s neighboring business, Ciao Mambo.

Turtainen has also been scouring Billings since last May acquiring tacky plastic furniture, music from Run DMC, Aerosmith and others, and clothing, including slap watches and animal-print fluorescent leggings. The script already includes lyrics, but for many productions, there is no melody to pair with the words. So Turtainen’s inventive mind started to drift toward songs from the ’80s that fit into the scenes — like “Dirty Laundry” and “Walk This Way.”

“I stumbled over a Run DMC song. It livens up the whole thing,” she said.

Shakespeare’s language has not been altered, but one minor character was cut from the production. Audience members may not be used to seeing Shakespeare’s work performed by girls with side ponytails wearing turquoise eyeshadow and guys carrying ghetto blasters, but Turtainen believes the language becomes more relatable because the characters are.

“This is a really fun show,” Turtainen said. “People need to know this is not hoity-toity Shakespeare. It’s lewd and it’s funny. Shakespeare wrote about opposites and switching roles and when you look at the ‘80s there was lots of that going on with entertainers like Boy George.”

As the cast ran through a dress rehearsal on Monday, Turtainen didn’t have to convince them to bring more energy to the show. In fact, she instructed them to tone down their laughter.

Stephen Seder’s portrayal of Sir Andre Agucheek is loud and fun. He teams up with Richard Leeds (Feste the Clown) and Gabriel Kenton (Sir Toby Belch) as three partying friends from the pizza parlor who set out to pull the ultimate prank on the pompous Malvolio (played by Carl Redman) to make him believe that his employer, Olivia (Sadie Turner) is in love with him.

Other surprises are in store for audience members who care to step back into the ’80s.

NOVA Center’s production of Shakespeare’s “Twelfth Night” takes a turn into the 1980s with cola-war allegiances and competing pizzerias.

Fashion from the 1980s is on full display in NOVA’s staging of Shakespeare’s “Twelfth Night,” which includes Justin Linder and Richard Leeds, from left.

The actors work on a scene inside NOVA’s Black Box theatre.