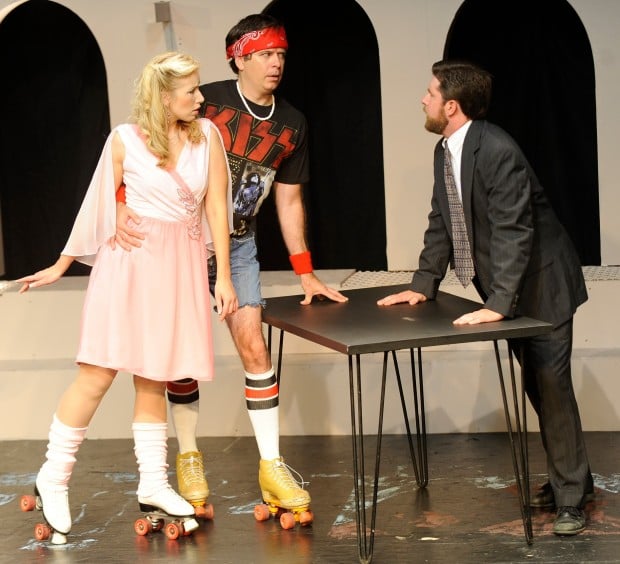 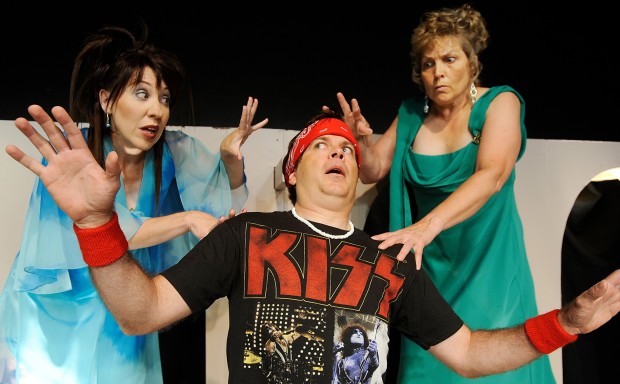 JACI WEBB Of The Gazette Staff

﻿As musicals go, “Xanadu” has all the typical features: dance numbers, a spectacular finale, a rocking band, and lots of singing. But throw in the kicker — roller skates — and you’ve got some interesting challenges for director Sarah Butts.

It helps that some of the local roller derby ladies took lead Rachel Sitzman under their wing. Venture returned the favor and will feature trick skaters on stage in the finale.

Sitzman, who plays the Greek muse Kira, said she initially had some struggles on the skates. After a few lessons at Skate World, she’s pirouetting all over the place.

“Day one, it was freaky. Now, I’m comfortable,” Sitzman said during a recent rehearsal.

She is paired with Kelly Martin, who plays Sonny, a sweet, if simple, artist whose big dream is to create the first Roller Disco. Hey, it’s 1980.

The stage production is a parody of the 1980 film starring Olivia Newton-John. The film flopped, but it eventually gained cult status. The Broadway spoof, though, experienced immediate success, receiving four Tony Award nominations in 2008, including one for Best Musical.

Set to the music of Electric Light Orchestra, the show follows a script by Douglas Carter Beane, one of Broadway’s master storytellers.

“You don’t realize how much of this music you’ll know until you hear the show,” Martin said. “Songs like ‘Magic’ and ‘Evil Woman.’ It’s really great stuff.”

“The challenge of this show is to never take yourself seriously,” Butts said. “It’s pure fun. And my cast has jumped right into the fray. I have fabulous voices in the cast, but it is the pure joy on stage that makes this show such a blast.”

The message in the show is to find the joy in your life. For Sonny, it’s a Roller Disco. For Kira, it’s Sonny.

The play follows Kira as she descends from Mount Olympus to Venice Beach, Calif., to a land filled with leg warmers, muscle shirts, big hairdos, and lots of pink sparkles. When Kira falls into forbidden love with the mortal she’s trying to help, her jealous sisters, played by Christie Anderson, Amy Logan, Tiffany Melia, Kevin Schweigert, Lynette Tedlund, and Patrick Wilson, take advantage of the situation. Logan does double-duty as musical director and Wendy Carlin choreographs.

During rehearsal last week, Melia worked with her fellow muses to get the steps down on one of the fast-paced disco numbers in the show.

And it looked like they took the advice to heart.