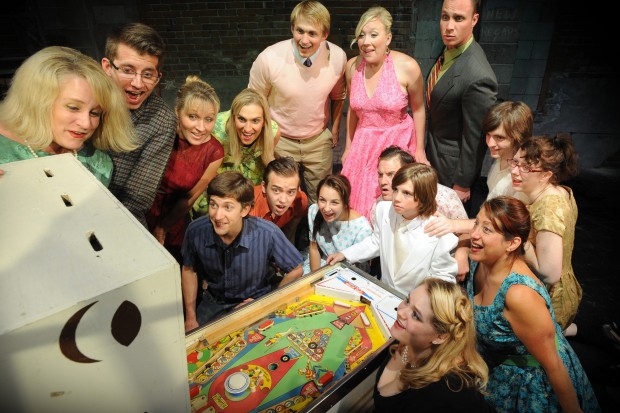 Herbert, back right, appeared in the musical "Tommy" this summer at Venture Theatre. 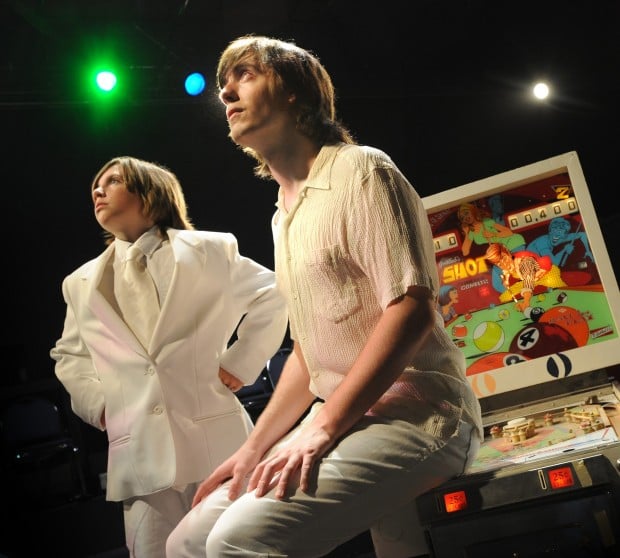 At just 11, Kieven McCave is taking on the big role of portraying the “deaf, dumb blind kid’’ in “The Who’s Tommy” at Venture Theatre. It opens Sept. 14.

The challenge for McCave is to play this boy who suffers from what we now know as post-traumatic stress disorder after witnessing a murder. Without breaking character, he must allow the adult actors to taunt and prod him in an attempt to communicate.

Young Tommy’s only ally seems to be his adult self, played by Travis Kuehn, a 21-year-old Rocky Mountain College vocal major.

When Kuehn, who has performed in several Rimrock Opera Company productions, croons the opening lines to the song “See Me, Feel Me,” it is wrenching. He is vocalizing what young Tommy has been trying to tell everyone since he was 5.

The Who’s Pete Townshend composed the music and lyrics for the rock opera, treading new waters for the British rock musician and the world as he paved the way for the new rock opera genre, including “Hair,” which Venture staged in 2010.

“My parents had this album, and I remember hearing it pretty much from birth,” said Kuehn, who grew up in Glendive. “The ‘See Me, Feel Me, Touch Me’ song is kind of the ‘Tommy’ motif.”

The production is being directed by Venture’s artistic director Robert Wood, one of six that he’s directing this season.

“It’s what I live for. If I could give up everything and just direct shows like this, I would be content. This is the most important part of my job,” Wood said.

The action begins in the 1940s during World War II when young Tommy’s father goes off to war. It continues through the 1950s and ‘60s, entering the psychedelic world of DayGlo and LSD.

“It’s about freedom but also about individual freedom. When Tommy breaks out of his shackles and sings ‘I’m Free,’ we all feel liberated,” Wood said.

Three pinball machines, including two antique models, will be used in the show. The third will be built 7 feet high and large enough to hold the adult Tommy in his triumphant scene.

Christie Anderson plays the Acid Queen, a character that she described as half shaman, half seductress. During rehearsal earlier this week, she belted out her big solo with plenty of swagger and clarity. Tina Turner played the role in the movie version and at some live shows.

Another Rocky vocal major, Keli Rhea Mitchell, plays the Hawker in the production, singing a smoky siren song as an introduction to the Acid Queen. In this role, Mitchell performs in an alto range, a change for her since she sang such a high soprano aria in “Sweeney Todd” last season at Venture.

Zak Kreiter sings the most well-known song in the production, the rock anthem “Pinball Wizard.” Elton John played Kreiter’s character in the movie version, wearing 10-inch-tall platform shoes. Kreiter plans to perform his song on stilts, something he’s used to when he helps his dad in drywall.

“I love that song. When I found out Venture was doing this show, I told Robert, ‘Please let me sing that.’ It’s rock ‘n’ roll, so it comes easier for me.”

That’s because Venture Theatre’s artistic director Robert Wood loves directing musicals. So this year, he gets six, including the season opener “The Who’s Tommy” starting Sept. 14. Tickets are available at venturetheatre.org or by calling 591-9535.

The Rolling Stones discuss if 2021 tour will be their last

Matthew McConaughey weighs in on his future in politics

Matthew McConaughey weighs in on his future in politics

Herbert, back right, appeared in the musical "Tommy" this summer at Venture Theatre.