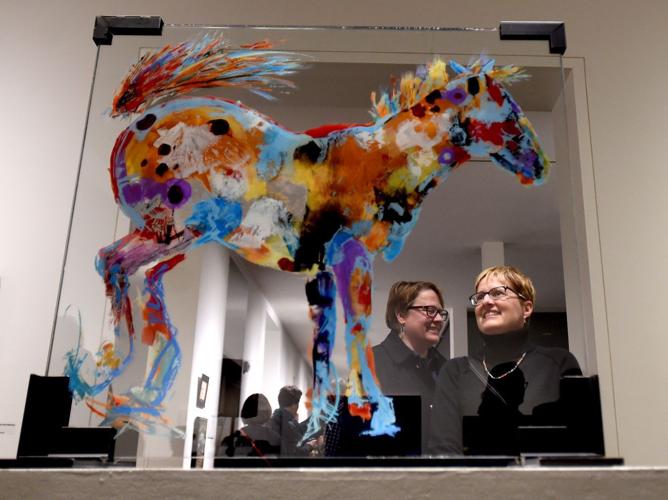 Laura Voight, left, and Sheryl Costanzo check out "Equus," a painting on glass by Carol Hagan on at the Yellowstone Art Museum. The painting was the highest selling piece in the Auction 48, selling for $7,250. 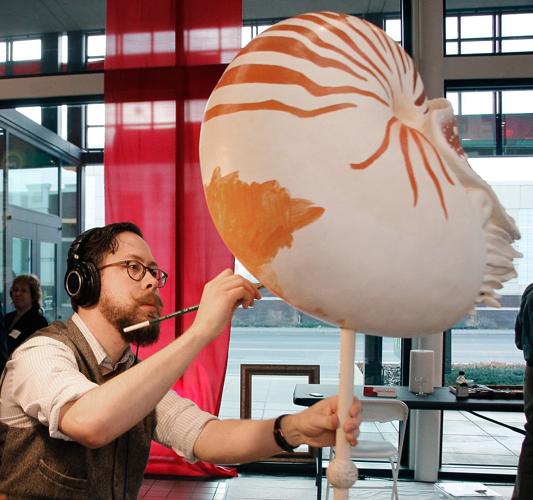 Louis Habeck paints in the Quick Draw at the Yellowstone Art Museum's Art Auction 48 in 2016. 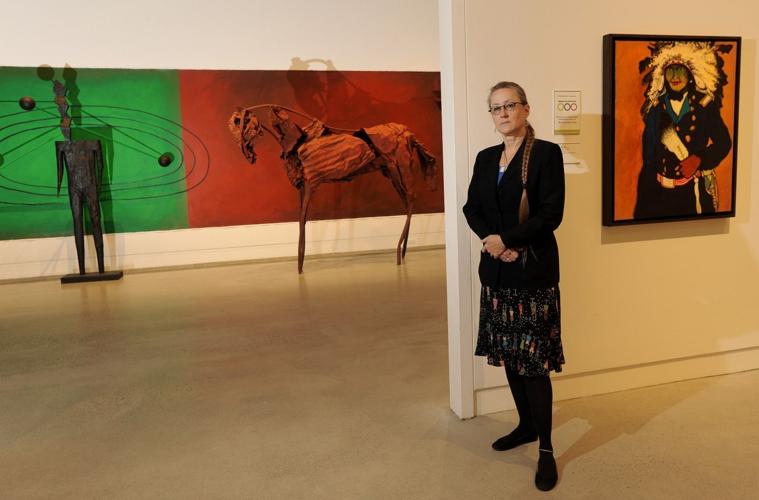 Yellowstone Art Museum director Robyn Peterson is shown with artwork from the permanent collection in 2014.

After a nearly 20-year lapse, the Yellowstone Art Museum’s recent re-accreditation from the American Alliance of Museums will be a big boost.

YAM executive director Robyn Peterson said the achievement means the YAM will have improved chances to receive art on loan from high-powered institutions and will be able to secure more grants.

“The expectation of being an accredited museum is that we are operating at or above professional standards at everything, from the execution of our mission, to the stewardship of our financial resources,” Peterson said. “It is the good housekeeping seal of approval.”

The YAM was originally accredited by the national organization in the 1980s, but the museum allowed the accreditation to lapse in the late 1990s.

“At the time, it had to do with a couple of things,” Peterson said. “Accreditation reviewers like to see continuity in the executive director office. After Donna Forbes left, two other directors came and went in quick succession. The other is that during the expansion of the building, the museum was closed for two years, making it difficult to access.”

An on-site review of the YAM was made last November by two national art museum professionals. Peterson was notified in late February of the re-accreditation and got a copy of the full report this week.

Peterson said when she took over at the museum in 2006, she made the re-accreditation a priority.

Two areas she focused on were the museum’s collections care and the other was working more with the community. During Peterson’s tenure, the Visible Vault was constructed in 2010, which allows the YAM to store the permanent collection in a secure, climate-controlled facility and also to host artists from around the world and many artists from Billings in the artist-in-residence program. The museum has also hosted community debates on the issue of guns and the legalization of marijuana.

“We’ve tried to do community events more and more each year. We are the community’s museum.”

Peterson said it’s wonderful to get the recognition from the American Alliance of Museums, which certifies 2 percent of the country’s 35,000 museums. The honor shows the art world that the YAM is exemplary in every facet of the operation from staffing to education to security and programming, Peterson said.

The announcement of the re-accreditation drew a standing ovation Saturday during Auction 48, the annual YAM art auction which raises money for programming and education.

Peterson was moved by the crowd’s enthusiasm and encouraged by the strong bidding and donations to the education program that followed her announcement.

While the YAM fell short of its goal to sell $200,000 worth of art, Peterson praised the community for donating $43,000 to the education program during the auction. Final numbers were not available on Thursday, but Peterson said early indications are that Auction 48 met the museum’s goal of raising $320,000 in gross revenue through ticket sales, a raffle, and the sale of art.

Billings artist Carol Hagan's painting on glass, "Equus," was the highest selling piece in the Auction 48, selling for $7,250.

The artwork that did not sell during the auction is still available for purchase at a reduced price on the museum’s website at www.artmuseum.org.

One of the biggest moments of the night at the Yellowstone Art Museum’s annual auction Saturday wasn’t a big sale, but an announcement.

Laura Voight, left, and Sheryl Costanzo check out "Equus," a painting on glass by Carol Hagan on at the Yellowstone Art Museum. The painting was the highest selling piece in the Auction 48, selling for $7,250.

Louis Habeck paints in the Quick Draw at the Yellowstone Art Museum's Art Auction 48 in 2016.

Yellowstone Art Museum director Robyn Peterson is shown with artwork from the permanent collection in 2014.