If a building could have an identity crisis, the Babcock Theatre in downtown Billings would be the one. Built as an opera house to rival those from St. Louis to Butte, the 1907 structure was once the pride of town. Stunning by all accounts, the theater could accommodate up to 2,000 patrons and courted performers from across the country to its stage, touted as the largest between the Twin Cities and the coast.

That stage burned down in the ‘30s when a massive fire broke out during a boxing match, and it was rebuilt only to be later bisected decades later by a concrete wall that reduced the stage by two-thirds and gave the back half to retail during the movie palace craze, when the theater functioned as a cinema.

When the Babcock Theatre opened, it was glamorous and expansive, with two balconies plus boxed seats on the side walls. Revolutionary at the time, the theater lacked support posts, which obscured patron’s view of the stage from certain seats. The place was decorated in a neo-classical style, adorned in lace and velvet, finished in brass, gold and richly stained wood.

In the ‘20s, the theater evolved to appeal to the next wave of patron, one who was more interested in motion pictures than live theater. The theater was completely redecorated in 1927 as movies developed sound. No longer were the boxed seats needed on the wings of the theater and the second balcony was removed. All focus was set toward a screen. Exotic places influenced designs of the time. Neoclassical was out, Spanish Colonial was in. Rich textures, warm earth tones, bright reds and greens and glowing gold took hold.

In 1931, just down the street, the Fox Theater opened, featuring an art deco style trend that appeared minimalistic in comparison to the grand opulence that came before. Keeping up with the Joneses, the Babcock owners and operators continued to upgrade the experience at the Babcock with the latest equipment and a new marquee.

The philosophy was that the show begins at the sidewalk, ensuring the glamour of attending a movie started before you’d even set foot in the door.

The fire of 1935 truly devastated the Babcock. The lobby and a dozen or so rows of seats were all that remained unspoiled. Rising from the ashes, the owners decided to rebuild, and the Babcock was restored in an art deco style popular at the time — just ask the Fox Corporation, which was building theaters across the country in the same style.

And we’re not even to the part where Charles Skouras takes the helm and redoes the theater in a style that’s named after the movie mogul. In 1955, the Babcock received its last major remodel, applying enormous prefabricated decorative elements throughout the building.

Skouras died in 1954, and the Babcock Theatre was one of the last theaters to be remodeled in the Skouras style, and one of the few seen outside of California.

The highly recognizable style has defined the Babcock for more than six decades. In some areas, the oversized plaster casts are in rough shape, but preservation efforts starting in 2008 have placed the theater on the National Register of Historic Places.

A great deal of research went into the filing documents, compiled by O2 Architect's Kim Olsen, which were used for this story. "This place matters," Olsen said. "The experience starts on the street, and the interior is just as historically significant as the rest of the building."

Olsen and her husband Don joined forces with Mike Mathew and Kay Foster to purchase the Babcock building in 2008 from its second owner, Ruth Moss. They formed the Babcock LLC and entered into an agreement with the city of Billings to purchase and restore the building and — after a negotiated period of time and a punch list of accomplishments — transfer ownership of the theater to the city.

“This has been a very important corner for a very long time in downtown Billings,” said Don Olsen.

Now that it’s city property, the Babcock Theatre is returning to its days as a movie palace.

Volunteers and paid workers have been focusing their efforts on getting the place ready for an influx of moviegoers coming downtown to watch first-run films. That’s the goal for Matt Blakeslee, executive director of Art House Billings, who recently inked a deal with the city of Billings to lease the property under the nonprofit Art House Cinema.

“The movie experience is coming back,” said Blakeslee. “I am excited to see what this place does, not just for Art House and for the Babcock, but for businesses downtown.” Plans to open the theater seven days a week are in the works, and the large theater will allow the independent Art House Cinema crew to attract first-run blockbusters.

Art House Cinema itself is undergoing significant expansion and is in the midst of a capital campaign to expand to three screens at their existing location at 109 N 30th St. Though it wasn't in the master plan to take on the Babcock Theatre, when it became a city property, and the city began the search for an entity to take it over, Blakeslee and the Art House board of directors expressed interest.

"This is a once in 30-year opportunity," Blakeslee said. "I believe in this place enough to fight for the vision we have because I believe it will work to have it open and get that marquee lit up seven days a week. We don’t have anything in downtown that is drawing people on the level that big budget film would do."

Blakeslee remembers attending a movie at the Babcock in the early 1990s as a grade-schooler and being shocked. “There was a mystery about this place. You saw the marquee, you saw the ticket booth, and you were curious…what was in there?”

The “rouge and lipstick” phase, as Blakeslee describes it, has furthered the efforts of the Babcock LLC, polishing up the place, painting the floors, installing new carpet and aisle lighting, redoing the lobby and concession area, and adding a digital 4K projection system from American Cinema Equipment out of Portland, which includes 24 surround sound speakers and gigantic stage speakers, as well as a new screen.

The iconic ticket booth that has sat vacant in front of the building since the theater ceased operations in the '80s is being restored and will once again be operational. Inside, the lobby will have three points of sale and a concession area.

Working from the ground up, Blakeslee said crews haven’t polished above 10 feet. “There will be a day that comes when we rehab everything up high, but we are just looking at what we can do in the window we have.”

His first response: “Oh no, what did I do?!” That next day, however, when Art House put out a call for volunteers across its social media and email platforms, 15 volunteers came to help begin the process of cleaning and preparing the theater for its close-up.

“This place tells the story of Billings in some ways, of downtown and the arts and culture scene,” said Blakeslee. “There’s something truly historic here that we are working to preserve.”

Costumed actor outside of Babcock Theatre, 1925

Line for "Return of the Jedi" at Babcock Theatre, May 1983

Boxing match at the Babcock Theatre, 2007

Friday the Babcock Theatre reopens at 6 p.m. with a ribbon cutting. Following the ceremony, "Indiana Jones and the Last Crusade," one of the last movies that played at the Babcock before it closed in the 1980s, will be shown at 7 p.m.

Films that showed at Babcock when it was operating as a movie house play throughout the weekend, including Top Gun at 1 p.m., Three Amigos at 4 p.m. and The Princess Bride at 7 p.m. on Saturday, followed by Some Like it Hot at 1:30 p.m. and Rocky at 6 p.m.on Sunday.

Tickets to see a film on this special opening weekend cost $1.

The Babcock Theatre in downtown Billings celebrated the reopening of the historic theater on Friday.

Kathryn Williams has 20 years in prison behind her, and 20 more to go.

Art House Cinema and Pub has received $20,000 from First Interstate Bank, bringing it closer to a fundraising match from Singh Contracting. 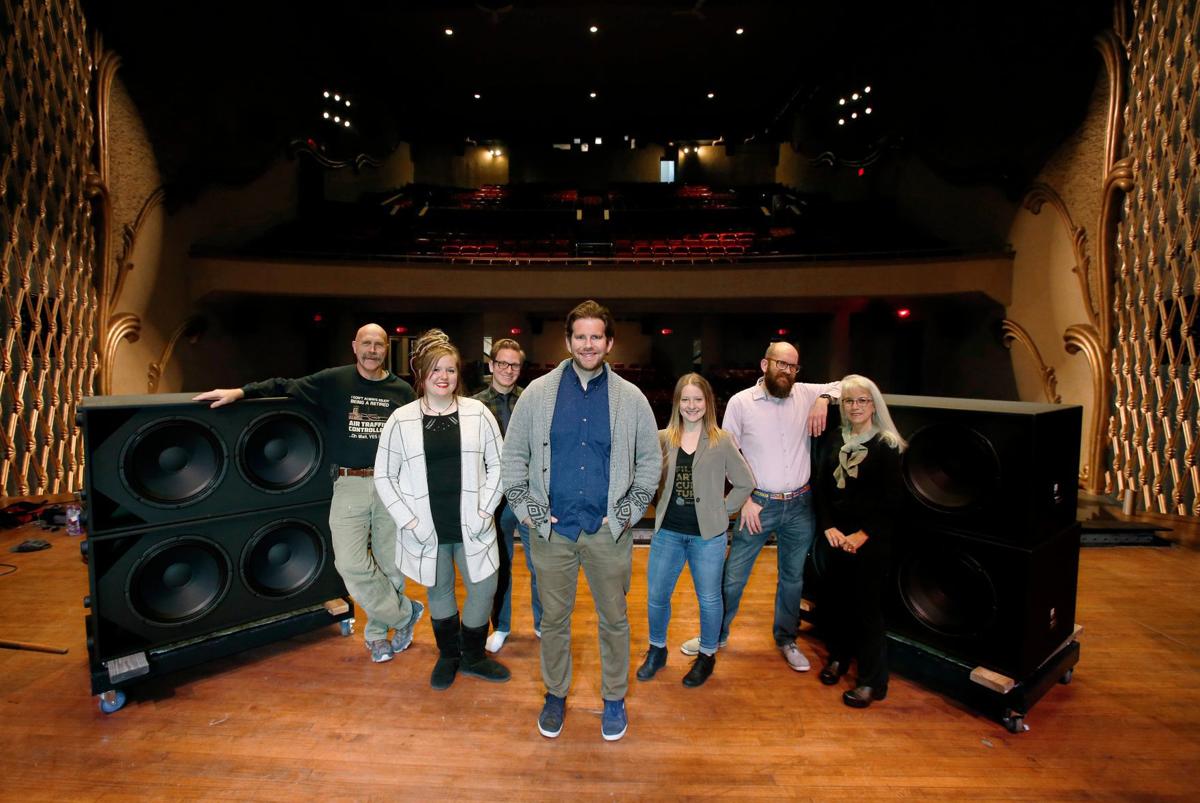 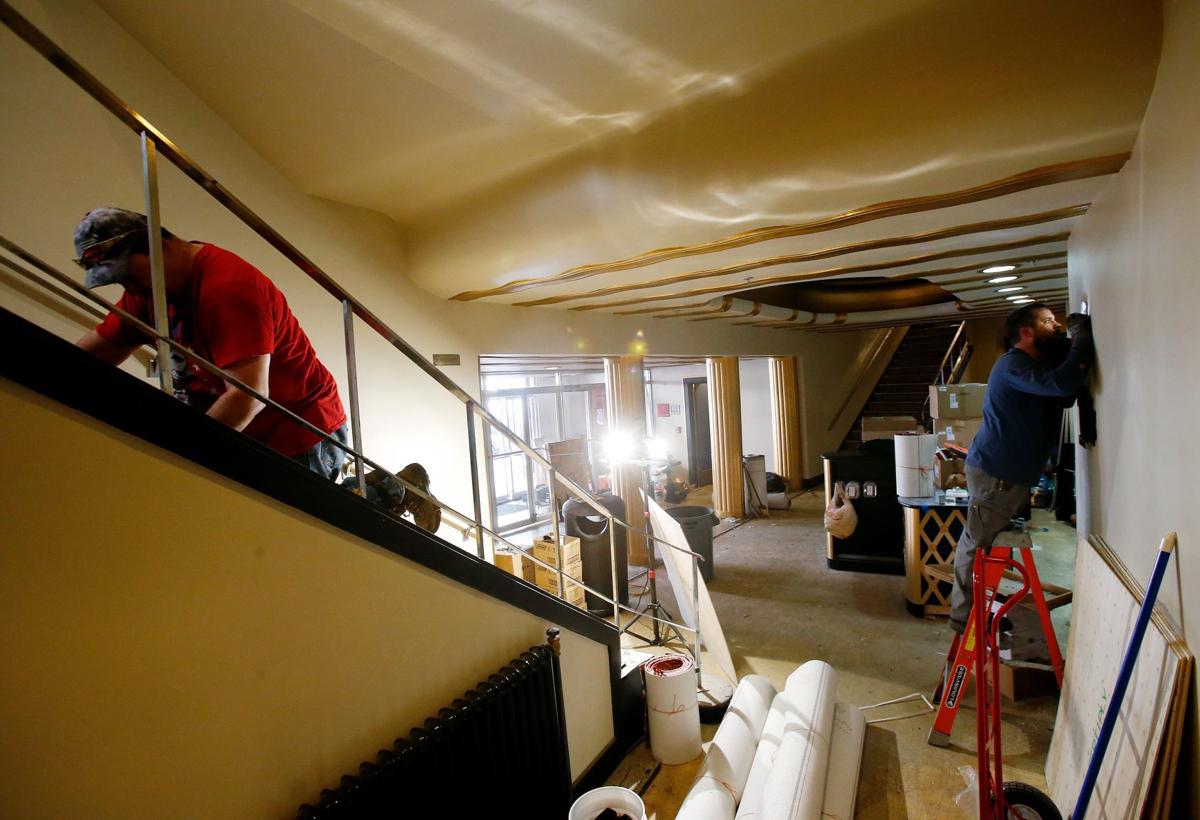 James Barr of Fischer Flooring, left, and David Boone of AEI Electric work in the lobby of the Babcock Theatre as work continues to prepare it for the grand reopening under Art House Cinema management. 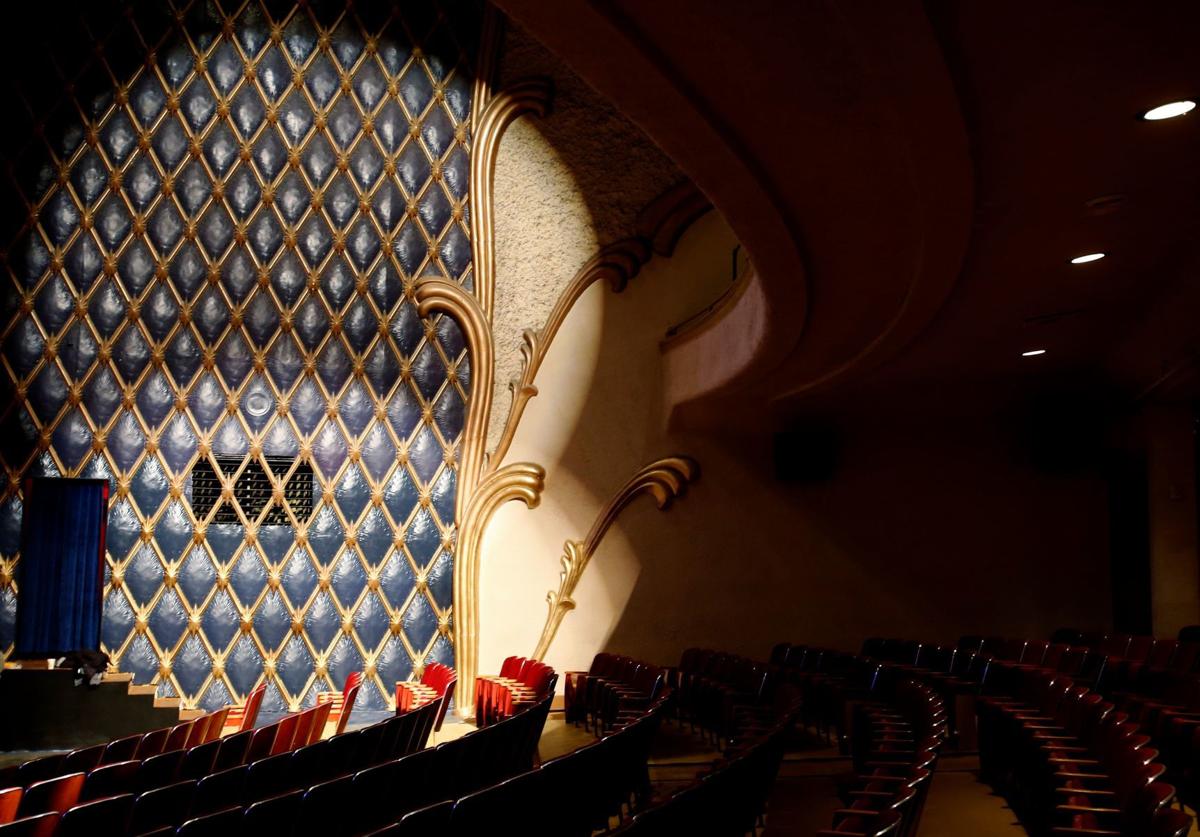 A spotlight illuminates a wall at the Babcock Theatre. The pillowed plaster was applied in 1955, and recently received touch-up work, though only up to 10 feet. The new lessee of the building, Art House Cinema, will tackle additional rehabilitation of the historic elements in a 10 - 15 year plan, according to Art House Executive Director Matt Blakeslee. 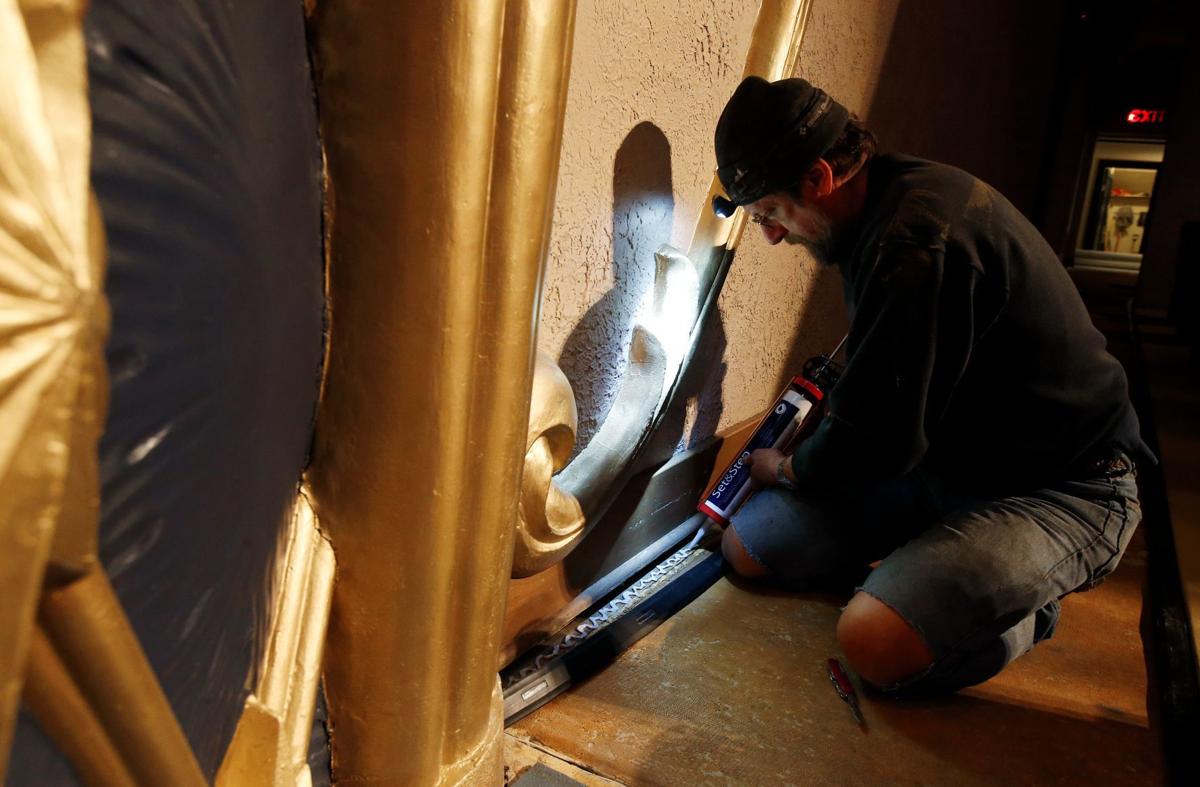 Volunteer Paul Bevacqua works on installing lighting strips in the Babcock Theatre as work continues to prepare it for the grand reopening under Art House Cinema management. 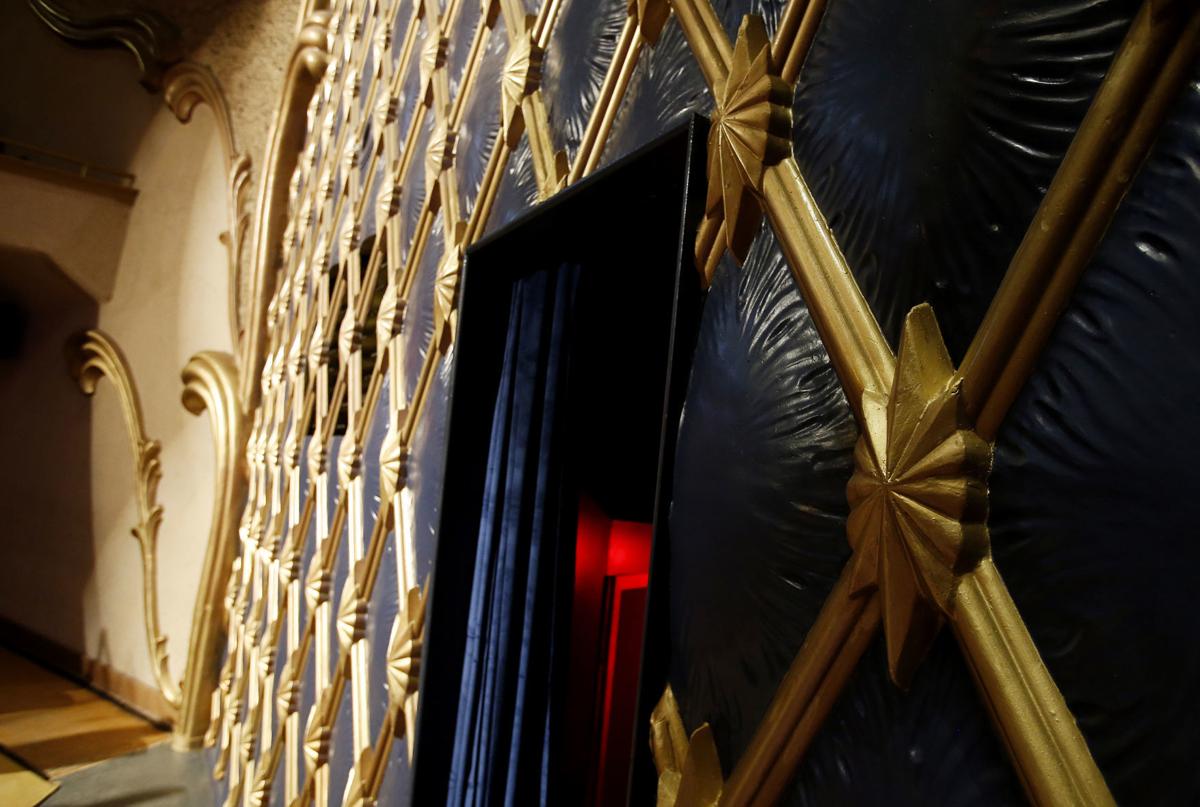 In 1955, the Babcock was updated to the “Skouras” style of theater design, featuring sweeping and pillowed plaster elements and scrollwork in red, blue, and gold throughout, named for its creator, motion‐picture executive Charles Skouras. 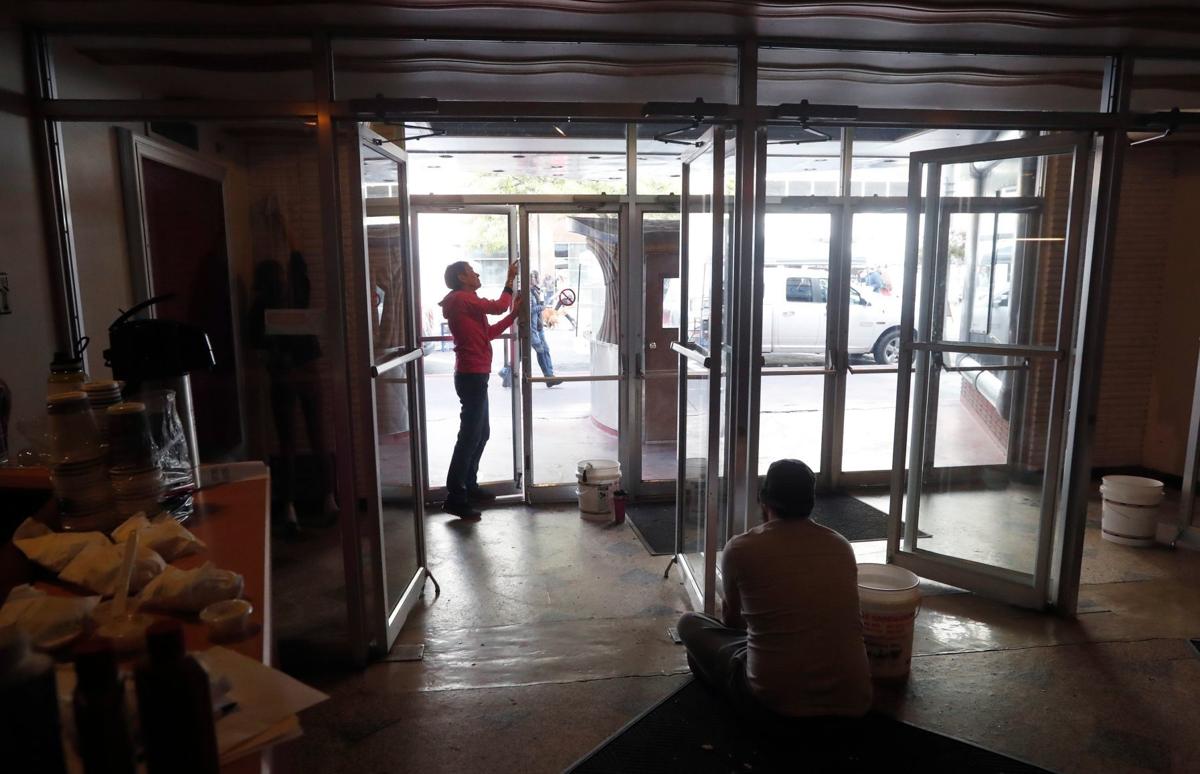 Volunteers clean the lobby at the Babcock Theatre on Saturday.