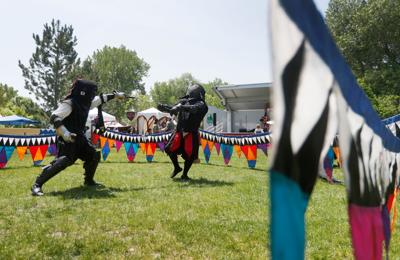 Kenneth the Humble is concerned.

“A dragon!” he cries, pointing to the sky. A giant winged monstrosity appears on the horizon.

Here in the 21st Century, we call that beast an airplane. But it’s understandable that Kenneth wouldn’t know that. He’s at the Montana Renaissance Festival, and like most everyone else here, is stuck firmly in a fantasy state of mind.

The festival is an annual event in the area, and has been for a decade. But this year’s event, which was held on Saturday, June 4 and Sunday, June 5, was a little different. The festival has changed its setting from ZooMontana to the Red Lodge Rodeo Grounds, which just happen to be right next to the Red Lodge Airport. Poor Kenneth the Humble has to deal with a lot of dragons.

When he’s not wearing a flower crown and directing Renn Festival traffic (he calls the cars “chariots”) Kenneth the Humble is Ken Haak, the promoter and organizer of the Montana Renaissance Festival, the biggest and longest-running faire of its kind in the state.

It was a big gamble to leave the zoo. The Renaissance Festival had become ZooMontana’s second-highest grossing event, as well as one of the biggest tourist attractions in the state.

Red Lodge, with its stately downtown and old fashioned flavor, can often feel like a town lost in another time period. But this was a whole other time period. A cruise down Broadway during the weekend found Renn Faire attendees mingling with confused tourists, probably wondering why the Beartooth Pass was closed and why everyone else was wearing chainmail.

That unseasonably cold and wet weather that ruined those vacations also took its toll on the Renaissance Festival. Rains turned the rodeo grounds’ arena to mud, forcing the jousting and melee tournaments to be held elsewhere on the fairgrounds, without the venue’s prime seating.

That hiccup aside, the move seemed to go swimmingly.

Haak said that the transition to the new venue was “incredibly surprising.”

“My first thought was ‘How many people want to go to a renaissance faire at a rodeo ground?’” he admitted.

But the gamble worked out. One of the big draws of the Red Lodge location over the zoo was that the new venue doubled the available parking. Still, by 1:45 p.m. on Saturday, Haak said he’d run out of space to put people.

He estimated between 6,000 to 7,000 attendees for Saturday, and around 2,000 for Sunday, which he explained is a typical drop for a two-day event. Those numbers would make it the most highly attended Festival in the event’s 10-year history.

“In our first year, we out-did everything we’ve ever done at the zoo,” Haak said. “I’m incredibly surprised and more than satisfied.”

The Festival’s attendees seemed excited about the new venue. Walking into a renaissance faire is like transitioning into another dimension.

The costumes were immaculate, a combination of strictly historical, more practical garb like padded gambesons and crafted plate armor, and more fantasy tinged outfits that made those who donned them look like characters from stories of yore, fairies and fawns and other mythic beasts that sure seem real when you bump into one at the faire.

Some walked on stilts, their faces covered in masks, glowering with good-natured glee at passersby.

One man bucked the general European vibe and spotted a complete set of samurai armor.

There’s a beautiful level of craftsmanship to everything being worn, turning regular people into walking works of art.

In true Montana fashion, many of the faire-goers open carried. However, their weapons of choice were mostly broadswords and battle axes. Many of the vendors sold blades, both the wooden or padded variety used for combat, or the real deal, perfect for complimenting an outfit or making someone really stand out in a crowd.

And lest anyone think such armaments don’t have a practical appeal, some people used their shields as a nice place to sit and watch the entertainment, which was provided by local troubadours, bards, magicians and circus troupes.

And just in case any guests tried to attend unarmed and in their civvies, the Festival’s multitude of vendors sold just about everything one could need, from tunics to helmets to cuirasses.

The new venue gave more space to those vendors, who make up the backbone of the Renaissance Festival itself. Haak estimated that around 70% of his vendors had been with them since the first Festival in 2012.

“All I thought all week was ‘I’m not going to be able to pay anybody,’” said Haak. But with the boom in attendance, that wasn’t a problem.

“Not only was I able to pay, I gave everyone a little extra,” an elated and relieved Haak said as things started to wind down.

The Red Lodge Rodeo Grounds had other benefits, as well. Having a central arena to walk around added a sense of authenticity to what real medieval faires might have felt like, or at least what they look like on fantasy shows like “Game of Thrones” and video games like “The Witcher” series, both of whom were heavily represented by cosplayers.

And heck, the scent of manure that generally pervades rodeo grounds made it feel even more period accurate.

Haak said he saw cars with license plates from Idaho, Wyoming, the Dakotas, Washington and Florida. What is it that brings people to events like this? He has a few theories.

Both the 2020 and 2021 Festivals were cancelled due to COVID. “There’s been nowhere to go, nothing to do,” said Haak. That drove excitement and attendance up.

“But the other thing is people love to get away and pretend that they’re somewhere else. That whole aspect of a fantasy faire is a big deal for a lot of these people,” he continued.

Ardrin Greayfield of Billings is one of those people. She’s a member of the Barony of Skystone, Billings AMTGARD group, who LARP (live-action role play) in Pioneer Park every week. This was Greayfield’s fifth or sixth faire, and she calls it the “biggest event of the year.”

“I’m really into cosplay,” she said while explaining what draws her to the Festival year after year. “I love dressing as a fantasy character, and it’s a great chance to show off my sword dancing.”

The Montana Renaissance Festival has outgrown ZooMontana and will move to the Red Lodge Rodeo Grounds the first weekend in June.

At 92, Norrine the Outlaw Queen rides on

Norrine the Outlaw Queen, whose country music has been an integral part of Billings' music scene since the 1940's, turns 92 next week. She's reflecting on a long life, well lived.

Mei-Li Stevens, a senior standout at Rocky in track and cross country, has been working on a project where she re-photographed historical spots around the Yellowstone River Valley.

Shot in and around Paradise Valley, "Montana Story" deals with abuse and trauma amplified by the dramatic background of its setting.

“Listen to the silences:” New book tells the forgotten story of the Chinese experience in Billings and beyond

Mark Johnson's new book about the history of the Chinese experience in Montana is out now, and he'll be discussing it at the Billings Public Library on Friday at 6 p.m.

'We Burn Like This' film returns home for Montana tour

'We Burn Like This,' a coming-of-age drama about Jewish identity and historical traumas, was shot in Billings in 2019. Filmmaker Alana Waksman and the movie are coming back to Montana for a tour.

Things to do: Alive After 5 kickoff, High Noon Lecture, ZZ Top and more

It finally feels like summer is here in Billings, and the warm weather is bringing plenty of events along with it.

Prison chaplain Suzanne Moran describes the program as a “sanctuary where the women can just be themselves.”

‘A small community that throws a huge party:’ The Harlo Music Project returns on Saturday

The Harlo Music Project is back on Saturday, welcoming people back to one of the state's best and most unique concerts.

This next week in Billings is almost too jam-packed with events. Here's some of the highlights.

The Little Bighorn reenactment is history you can feel

The Real Bird reenactment of the Battle of the Little Bighorn brings the battle to life on its 146th anniversary.

Did Cardi B just drop the song of the summer?

Did Cardi B just drop the song of the summer? 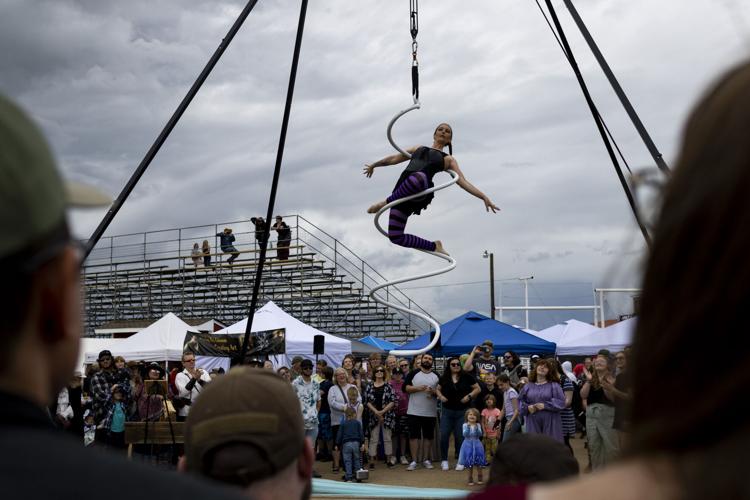 Casey Page performs as an aerialist during a performance by Billings AlternaCirque at the Montana Renaissance Festival at the Red Lodge Rodeo Ground on Saturday. 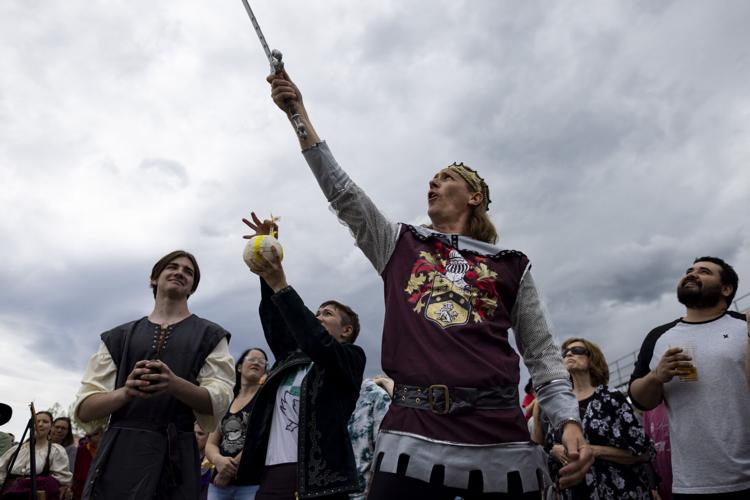 Brian Pohlman performs as King Arthur in a skit during a performance by Billings AlternaCirque at the Montana Renaissance Festival at the Red Lodge Rodeo Ground on Saturday.