Paul Doffing, left, and Greg Tambornino pedal up Highway 87 from Hardin to Billings Thursday as part of Doffing's "Freedom from Fuel" musical tour. 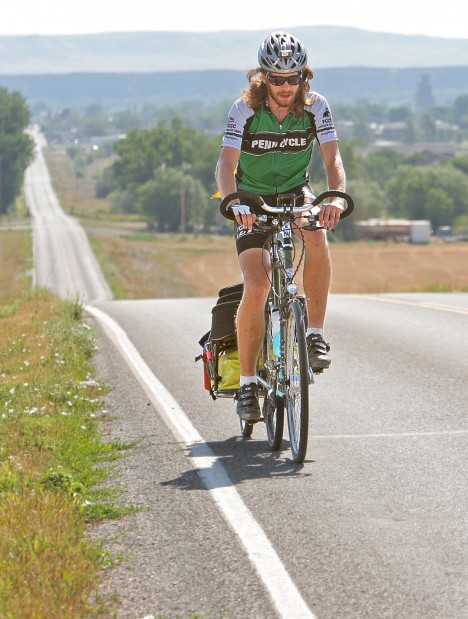 Paul Doffing peddles up Highway 87 from Hardin to Billings on Thursday, part of his “Freedom from Fuel” musical tour.

Last spring, Paul Doffing was thinking of the best way to promote his new album. He also wanted to promote a lifestyle that has a light impact on the planet.

To make an impression, he said, “I knew I had to do something jaw-droppingly intense.”

That’s when he conceived of his 5,000-mile “Freedom from Fuel” bicycle trip around the United States, playing shows and introducing people to his music along the way.

Leaving from home base in Minneapolis, the singer-songwriter-guitarist was supposed to kick off the tour with a show in Duluth, Minn. That was canceled by unprecedented flooding in Duluth, so he headed straight for South Dakota on June 22.

He has endured burning-hot temperatures since then, and in Montana, he pedaled through miles of fire-blackened forest. Flood, fires and extreme heat: it all seemed to make sense.

“Dramatic weather and trying to make a statement about fossil-fuel consumption — it made an impression on me, at least,” he said.

Another thing that made an impression on him was biking up two steep passes on the way to the Little Bighorn Battlefield on Wednesday. As he struggled through “this bitterly unforgiving countryside,” he said he had a visceral understanding of what Lt. Col. George Custer put his men through on their way to their fateful battle.

“It made a heck of a lot of sense to me why he lost,” Doffing said.

Doffing, 25, has been accompanied so far by his close friend Greg Tambornino, who was between jobs and decided to ride along. He’ll probably stick around until August, Doffing said, meaning he’ll be alone for almost three months after that.

He plans to make a big circle around the country, but he will go by car from San Diego to Texas, to avoid the southwestern deserts. Even so, he said, he’ll put 5,000 miles on his 24-speed steel touring bike in four months.

Another good road feature is a waterproof rack for his iPhone, mounted on his handlebars, with a battery powered by a generator on the hub of his front wheel. It gives him communications with the larger world and a good GPS system to find his way.

Doffing said he had been averaging 60 miles a day but is thinking of cutting back to 45.

He plans to take a weeklong break in Missoula to book more shows around the country and to do more planning on his route.

Doffing, who plays a lot of instrumentals and does some singing, said his influences include Bob Dylan, Leo Kottke, John Fahey and the Brazilian guitarist Luiz Bonfa.

At his shows, he also does some talking about climate change and fossil fuels, but he doesn’t preach and he tries not to get involved in the politics of the issue.

He’s passionate about the subject but he wants to listen to people and have good discussions.

“I’m working on being more graceful,” he said.

Paul Doffing will promote his "Blossom Is You" album with two shows in Billings.

Nominations for the 2022 Grammy Awards were announced Tuesday. Here's a list of nominees in top categories.

Paul Doffing, left, and Greg Tambornino pedal up Highway 87 from Hardin to Billings Thursday as part of Doffing's "Freedom from Fuel" musical tour.

Paul Doffing peddles up Highway 87 from Hardin to Billings on Thursday, part of his “Freedom from Fuel” musical tour.