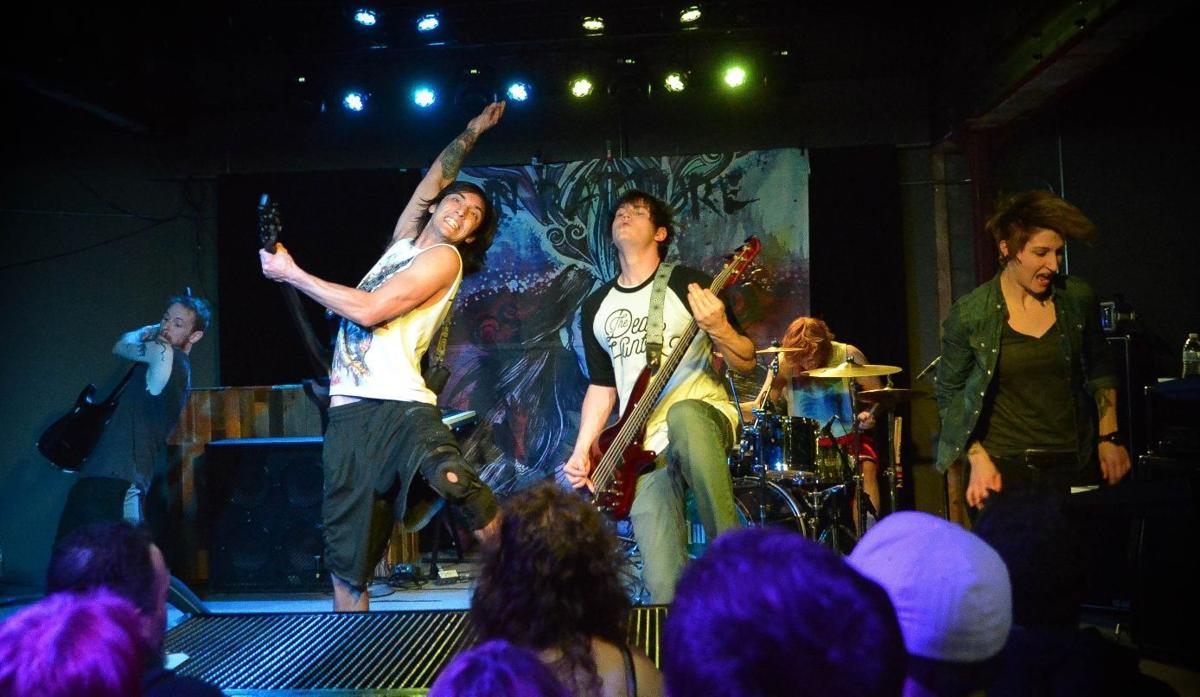 In Rapture headlining recently at The Pub Station in downtown Billings. The band's shows can be frantic. The band will host a CD release show Friday, Feb. 12 at the Pub Station. 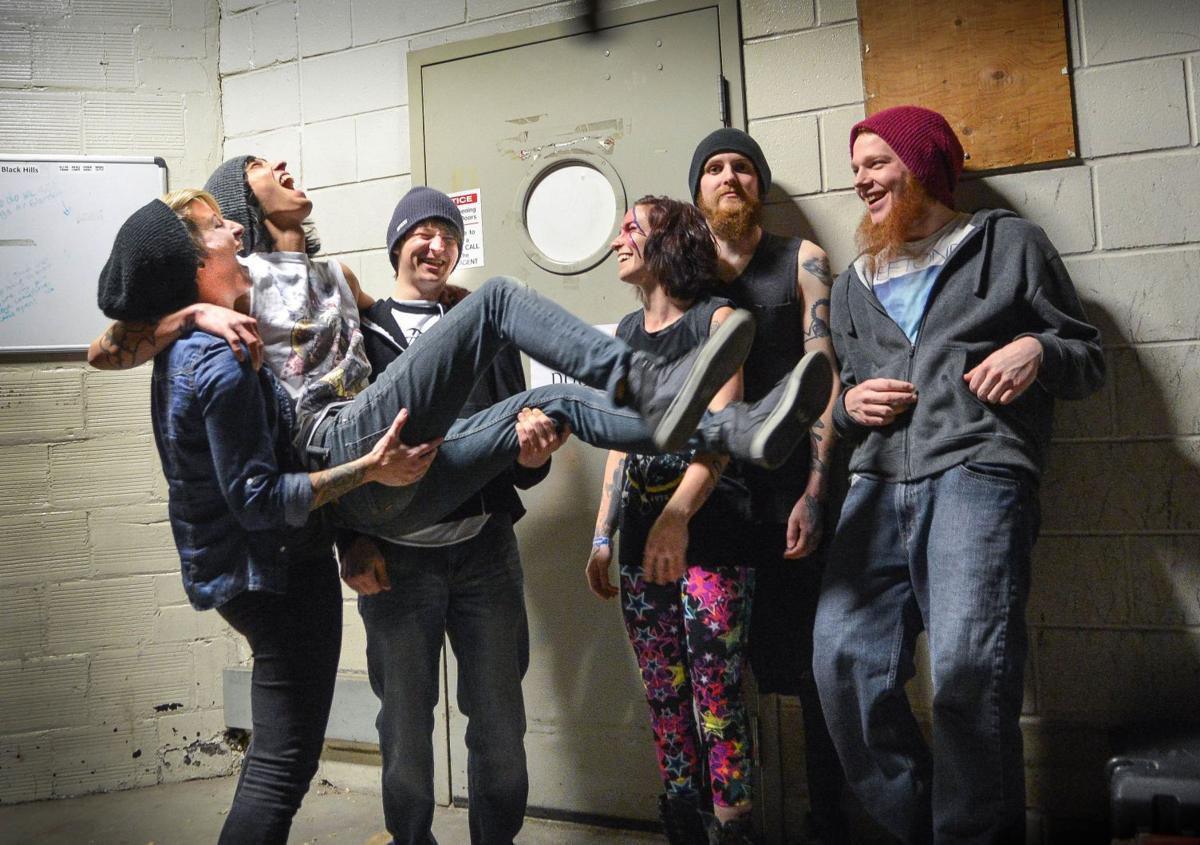 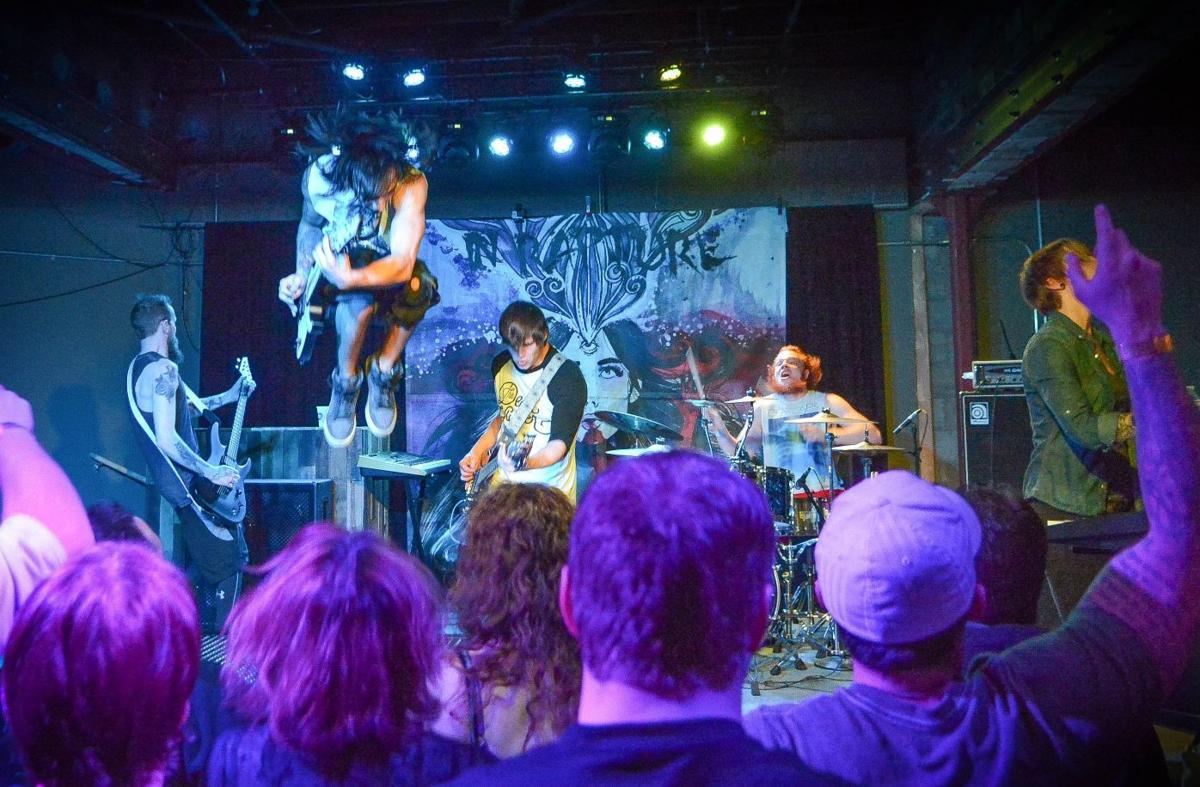 In Rapture guitarist Tony Morales gets some air during a recent headlining concert. The band is preparing to hit the road soon for a tour of the West. The band will host a CD release show Friday, Feb. 12 at the Pub Station.

Rule number-one for aspiring bands is to first conquer your own hometown.

In Rapture has done that, judging from the packed houses wherever they play in Billings and their manic fans, who sometimes gets as wild as the band members do on stage.

Rule number-two is to have a new CD to tour on. Last fall, the six-member band traveled to Seattle where they had their newest album professionally recorded.

On Friday, Feb. 12, the band will headline a special 8 p.m. CD release show at the Pub Station in downtown Billings.

After that comes the hardest part, hitting the road, for who knows how long, to conquer the rest of the world.

In a few months, In Rapture will pile into their van, pulling a trailer full or gear, and race through a grueling tour that starts in Fresno, Calif., weaves through Nevada, Utah, and beyond.

"We're going to take it all the way to the end, until there are no other options," said drummer J.R. Anderson.

"We're going to keep at it until we can't anymore,” added bassist Zach Ostwalt. “Until we can't handle it. Until our bodies give out."

All of the band members, except for keyboardist Kailee Hanson, live together in a house on Lewis Avenue. And, it's not what you imagine. It's not some stinky dive with bugs and dirty mattresses on the floor. It's looks more like your grandmother's house.

On a recent practice night, band members were cooking stir fry and sipping wine. There's a terrarium in the living room and a cat wondering around looking for attention.

But, in the wood-paneled basement the walls are covered here and there with acoustic foam and there’s enough musical equipment to revive Woodstock. There’s music gear piled in the hallway leading to the bathroom, gear in the laundry room, and on a shelf next to a stove there’s gear where pans should be.

The practice room is set up like a stage, with the band members in a semi-circle and set lists tapped to the floor. Hanson's keyboards are on one side, with Samm Bauer's keyboards on the other, and there’s a wall of guitars belonging to Tony Morales, Nate Yeager and Ostwalt. Anderson's drum kit sits in the middle and it’s beat nearly to death. Anderson isn’t exactly playing little jazz trills here. He’s a melodic player, but also a basher. He broke a drumstick and a cymbal during practice.

This is clearly the home of a band of focused friends with a singular mission.

Here’s another rule for aspiring bands, a rule that In Rapture has rightly ignored. Life would be much easier for a touring rock band to play straight up rock ’n’ roll, put the girls up front in tight shirts. Heavy metal also plays well on the road in small-town America and doesn’t demand much finesse.

But, In Rapture plays a style of ambient post-rock that doesn't need a vocalist. They blend a thick catalog of rock influences, from prog, to ’80s guitar riffs, to metal and indie. It's Rush meets Nine Inch Nails meets Explosions in the Sky.

Practicing in their basement, the band runs through some new songs they’ll be incorporating into their live sets.

The songs can be longer than rock radio approves of. The guitars dive in on top of each other, piling up over the keyboards and sampled sounds, the drums rolling and bashing, the songs building to huge, rapturous crescendos, sometimes unraveling slowly, sometimes collapsing into silence. The songs can be mesmerizing, operatic in their emotional sweep.

And, that's exactly what the band is going for, a hypnotic swirl they hope their fans get as caught up in as they clearly do.

“I can get a little carried away, a little tranced-out,” Ostwalt said.

All of the band members came together from other more traditional rock bands. But, once together they realized they didn’t want to build the band around a vocalist.

“We are really picky about vocals,” said guitarist Yeager. “Vocals either make or break a band and we didn't want to limit what each band member can do.”

That’s one reason they decided to chart their future in post-rock. They like the way an instrumental band lets band members express themselves individually.

“Each instrument makes up for not having a vocalist,” said Bauer. “Everyone gets to shine.”

In Rapture performs Friday, Feb. 12, 8 p.m., all ages, at The Pub Station with Engage the Unseen and The Water Proxy. Tickets are $5.

“We are really picky about vocals. Vocals either make or break a band and we didn't want to limit what each band member can do.”

Eric Church, Thomas Rhett and Blake Shelton will also perform at the "Daddy of 'Em All."

The company that sold Lil Nas X's "Satan" shoe made from Nike Air Max 97s will buy it back from customers for a full refund after a settlement with Nike.

The Weeknd is top nominee for May's iHeartRadio Music Awards. Here's the full list of nominees

The Weeknd, Megan Thee Stallion and Roddy Ricch are among the top nominees for next month's iHeartRadio Music Awards.

In Rapture headlining recently at The Pub Station in downtown Billings. The band's shows can be frantic. The band will host a CD release show Friday, Feb. 12 at the Pub Station.

In Rapture guitarist Tony Morales gets some air during a recent headlining concert. The band is preparing to hit the road soon for a tour of the West. The band will host a CD release show Friday, Feb. 12 at the Pub Station.