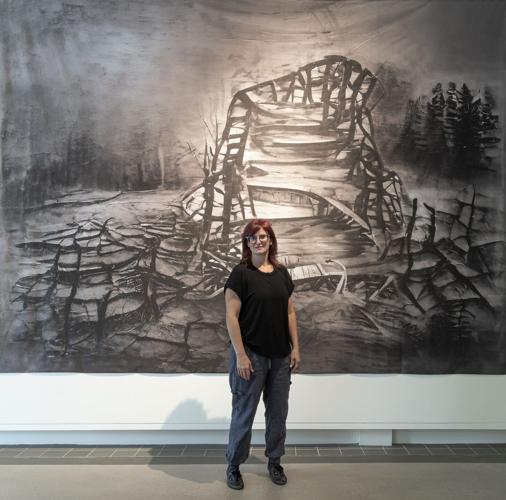 Keeara Rhoades in her exhibition "The Shape of a Corner" at the Yellowstone Art Museum.

Keeara Rhoades' "Margins and Arm Ends (a stabilizing Mother's Arm)" is a video still diptych from "The Shape of a Corner."

Rhoades’ art comes at you from all sides. It’s huge in parts, tiny in others. It wraps you. You can’t think about anything else when you’re in it.

You can see it all at “The Shape of a Corner,” her new multimedia installation at the Yellowstone Art Museum. It’s like going into another world.

The gallery at the YAM that holds “The Shape of a Corner” is right next to the museum’s bright lobby. But when you enter Rhoades’ space, that changes. Her gallery is lit primarily by a flickering movie projected on the wall.

That’s the eponymous short film she named the exhibition after. The film “The Shape of a Corner” is 33 surreal minutes, broken into 20 vignettes. Rhoades’ camera sweeps across landscapes. Many of her vignettes feature dolls, moving and dancing like people. Old tintype photographs get distorted and twisted. AI images crawl across the screen. Music, strange and slow, much of it played by Rhoades’ husband Brian Wetzstein, who plays steel guitar in the Billings-based country group Calvin and the Coal Cars.

In addition to her own work, Rhoades is a professor of art at Montana State University Billings. She’s originally from the small town of Newcastle, Wyoming, on the south end of the Black Hills. She lived in the Northwest for a while, but she’s been in Billings since 2017. The influence of places like Billings and Newcastle, which can initially look flat and barren until you start picking up on the cracks and splinters of the land, are all over “The Shape of a Corner.”

“It follows the landscape,” she said of her film, “it curves around and it tries to seek out moments.”

The 20 vignettes aren’t marked in the film. Scenes just bleed into each other. It’s a cycle.

“I was thinking about those cycles that we go through every day,” Rhoades said. “It’s not only how the world turns, but the cycles we’re centered around.”

The only thing that breaks the loop is the credits. It was important for Rhoades to put them there. Not only to thank her collaborators, but to add a sense of finality to the whole thing.

“I feel like maybe the film creates a metaphor for humanity,” Rhoades said. “That’s a huge topic, but there’s that cycle that we go through with generations regenerating. We all have that cycle come to an end.”

It’s all so human, but there’s something otherworldly here.

“I’m a vivid dreamer, and a lot of this comes from that,” Rhoades said. “When I wake up, I remember everything I dream. I can’t let it go. I take it with me.”

This is the result. “The Shape of a Corner” is made of the little things Rhoades takes with her.

At first, she’d just planned on making the movie. All the props and pieces she made were just going to be in service of the film. One of the pieces she made changed her mind.

It’s called “Infinite Folds,” and it’s now the most dominant piece in the exhibition. It’s massive, a three yard by five yard piece of muslin fabric stretched across various household objects. There’s a baby mannequin. A tricycle (borrowed from Rhodes’ daughter), and a rody, a toy horse used to help kids learn to walk.

But it’s not all childhood. There are copies of old Frederic Remington statues that Rhoades found at Goodwill.

“I need to have the cowboys in the toys,” she remembers thinking, “That’s something I really want to work with.”

The process was finding out how it connected. Rhoades was so transfixed by “Infinite Folds” that she decided to feature it in the exhibition, and grow the scale of what she was working on.

“I really liked it as an object,” she explained. “As I decided to build this into more of an installation, the works within the space should leverage this conversation.”

The rest of the exhibition is covered in other props from the movie. Rhoades loves old glass plate negative photos, and scours eBay looking for auctions. She integrates them into her video work, often keeping the photos as negatives. They’re real images, of the real world. But not exactly how we’re used to seeing it.

There’s another piece that shows a wooded area. The trees are barren and cold, and they’re all reflected in a still pool of water. It’s a landscape photo Rhoades took near Sheridan, Wyoming.

Except, not quite. The water isn’t really there. Rhoades added it by digitally flipping and editing the photo. Once that’s pointed out, the whole mirage starts to crack. You’ll notice a tree that’s replicated, or something that just doesn’t quite look right.

“This feels more real to me than the real place,” Rhoades said, “because I can look at it, and I can find my base and I can come back in and connect it to a moment.”

Connecting to a moment is what “The Shape of a Corner” is all about. One of those moments was the COVID pandemic.

Rhoades has been working on this project for years, done in her nearby studio in the YAM’s Visual Vault, where she’s the artist in residence.

During her work, the pandemic took away her ability to bring in actors for her film. So she improvised and used porcelain dolls.

“I realized that the idea of a stand-in was relevant, and spoke to our current times,” Rhoades said.

There are three enormous prints that make up the majority of “The Shape of the Corner’s” gallery wall space. One is 12 feet by nine feet. One is 10 feet by 14. It had to be tucked at the bottom to fit.

They look sort of like abstract paintings. But there’s something amiss. That’s because they’re AI generated, not made by a human hand. Rhoades put in phrases from the “Shape of a Corner” screenplay and a computer program spit them out. She then went in and stitched smaller images into these massive ones.

They’re printed on microfiber fabric. They can be stepped on and abused and washed to be made new again. Rhoades had to iron them so they’d hang flat.

She used them as backdrops for the movie. But they’re interactive, too. She encourages visitors to the gallery to take their photos in front of the images, since they absorb light and don’t reflect it back.

“The obvious thing to do is to allow people to engage with it,” she said. “They can do selfies if they want.”

Again, it’s the real and unreal. The practical and the magical.

“Those kind of assemblages, those kinds of moments, they’re surreal,” she admits. “But there’s something to carry through.”

What is that something that people carry through? It’s different for everyone. Rhoades work isn’t telling people how to think, but just showing them a way to think, a means to experience the world they maybe haven’t tried before.

“It’s all art,” Rhoades said about her work. “It’s immersive. We, as the viewer, we’re making connections, and hopefully finding alignment.”

There will be an opening reception for Keeara Rhoades' "The Shape of a Corner" on Thursday, Sept. 22. Reception starts at 5 p.m., and Rhoades will give an artist talk at 6:30 p.m. Museum admission is free.

New YAM director Jessica Kay Ruhle is up for the challenge

Jessica Kay Ruhle, who moved from North Carolina to accept the YAM director job, is looking to emphasize the museum's relationship to the Billings community.

Along the banks of the Gibbon River near Madison Junction, the "All Nations Teepee Village" art installation allowed Indigenous people to share their stories of Yellowstone National Park.

The Last Revel and Laney Lou and the Bird Dogs have found success on stage. Off-stage, band members Ryan Acker and Lena Schiffer have found something else: love.

Medium well done: The 'Long Island Medium' is a true believer, and she thinks you can be, too

Theresa Caputo will be at the ABT Sunday. In advance of that, she discussed her purported powers, how she thinks they can help people, and how she deals with skeptics.

"Voices of the Past" will bring six historic Billings residents to life at the Mountview Cemetery this weekend and next.

'Return,' a documentary by Billings filmmakers about Jim Markel Sr.'s first trip back to Vietnam after he served there during the war, premiers at the Babcock on Saturday night.

“I want to give the people who enter the sculpture a sense of wonder, similar to how they felt when they were hiding as kids."

Five of the most unique, interesting events in Billings over the next week, hand picked by our arts reporter.

Wilco are the last rockers standing at Bozeman show

Wilco, their songs a mixture of jazz flows, rock backbeats and lyrics of modernist poetry, are an rarity in 2022. But you couldn't tell at their sold out Bozeman show.

Keeara Rhoades in her exhibition "The Shape of a Corner" at the Yellowstone Art Museum.

Keeara Rhoades' "Margins and Arm Ends (a stabilizing Mother's Arm)" is a video still diptych from "The Shape of a Corner." 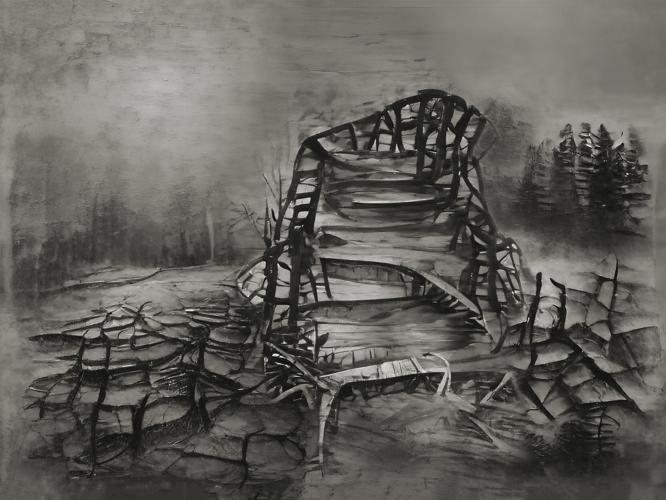 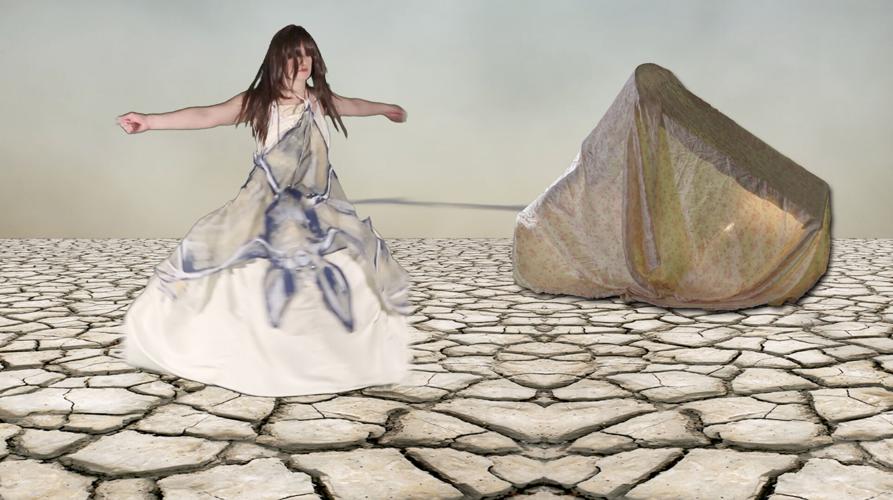 "Twirl into a Dizzy" is a video still from Keeara Rhoades' "The Shape of a Corner." 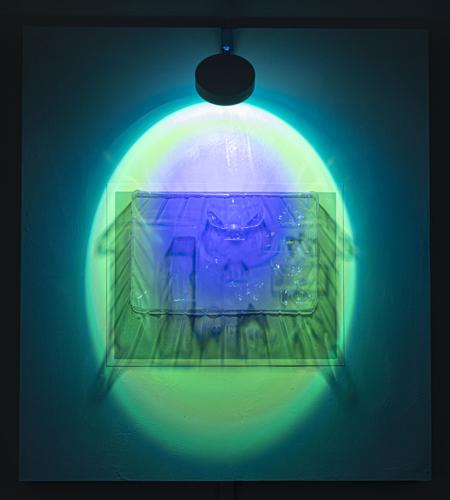 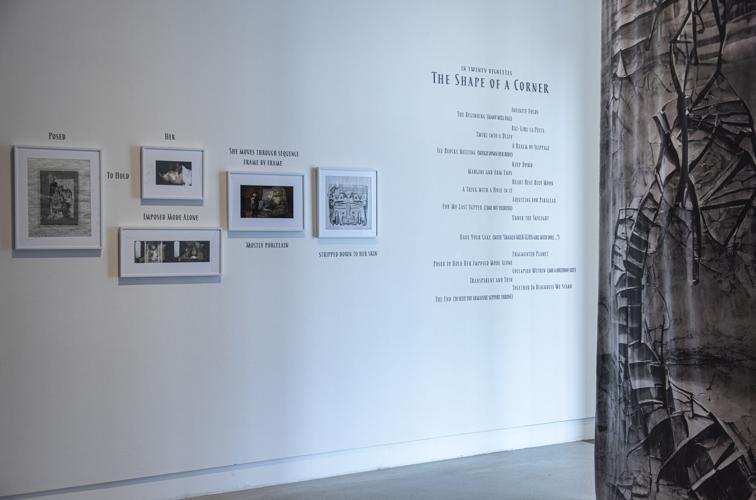 The southeast wall of Keeara Rhoades' Yellowstone Art Museum exhibition "The Shape of a Corner." 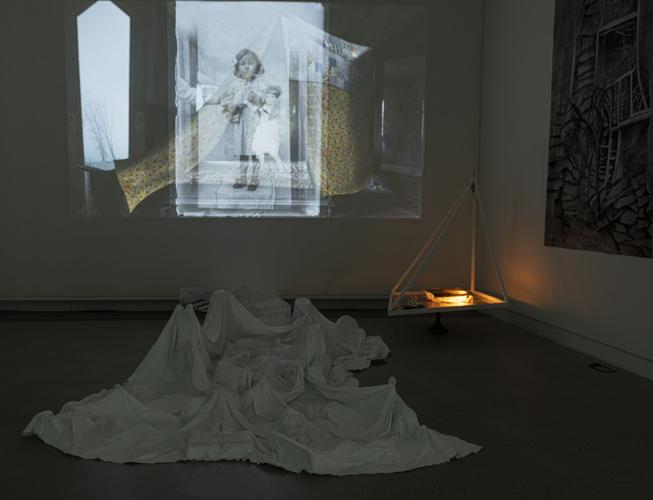 "A Pledge and an Anthem (with 'cracked MILK GLASS Girl with doll pastel portrait')" is a video still from Keeara Rhoades' "The Shape of a Corner."