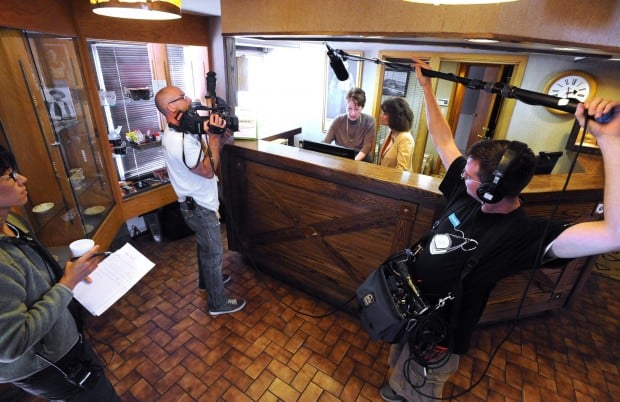 A film crew from the reality TV show "Hotel Impossible" shoots a segment in the Dude Rancher with hotel owner Virginia Karlsen, left, and front desk manager Nancy Hillman. The show will be a follow-up to a segment filmed last spring before major changes were made to the hotel. 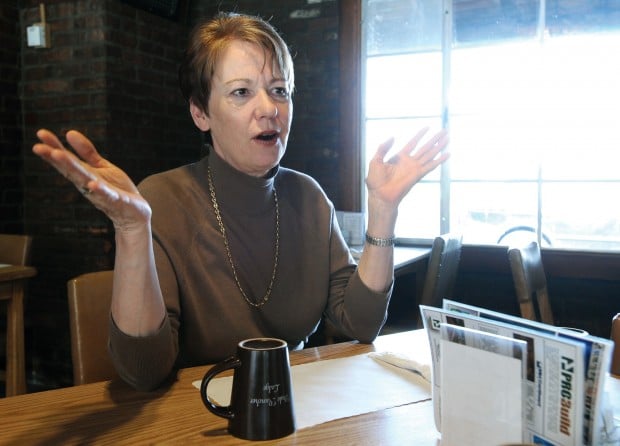 In the hotel's restaurant, Dude Rancher owner Virginia Karlsen talks about the changes made after the TV reality show "Hotel Impossible" featured the Dude Rancher on a segment.

A film crew from the reality TV show "Hotel Impossible" shoots a segment in the Dude Rancher with hotel owner Virginia Karlsen, left, and front desk manager Nancy Hillman. The show will be a follow-up to a segment filmed last spring before major changes were made to the hotel.

In the hotel's restaurant, Dude Rancher owner Virginia Karlsen talks about the changes made after the TV reality show "Hotel Impossible" featured the Dude Rancher on a segment.

For the second time in less than a year, a camera crew from “Hotel Impossible” filled the reception area of the Dude Rancher Lodge.

In early May, “Hotel Impossible” host Anthony Melchiorri visited the Dude Rancher to turn the hotel around. As cameras rolled, workers from local companies remodeled the Dude Rancher’s front desk and one guest room in a four-day blitz.

The program aired July 9 on the Travel Channel.

Another “Hotel Impossible” group arrived Monday to tape an update of what has happened to the hotel since May, to air in February, Karlsen said.

Although the hotel was not in bad shape, she was seeking help to make the downtown landmark better.

One result of the television program was to put the Dude Rancher on the map again.

Local residents stopped by to see the remodeled rooms they had seen on television.

But it went way beyond that.

“Hits on our website went up hundreds of percentage points and our Internet bookings went up 250 percent,” Karlsen said.

The hotel’s appearance on the program was essentially a multimillion-dollar advertisement for the Dude Rancher and Billings.

If business continues to do well, Karlsen hopes to redo more of the 56 rooms.

Improvements resulting from the “Hotel Impossible” visit are more than just redecorating.

Karlsen created a new training program for the staff, improved the customer response system and gave housekeepers better tools with which to work.

The two television tapings are not the only significant events at the hotel this year.

A couple of weeks after the first taping, a man fleeing from police downtown ran into the lobby early one morning and locked himself in a bathroom. The man, who had fired at police, shot at police again through the bathroom door and was killed by police.

“It was a terrible event,” said Karlsen, who did not want to say too much about it, except that all damage done during the shooting has been repaired.

The shooting will be addressed in the follow-up television segment, she said.

The program’s producers were impressed that some hotel guests who had to leave the hotel because of the shooting returned when they could.

Melchiorri also gave Karlsen advice on how to deal with the situation, including the name of an emergency media relations manager.

She declined to say what suggestions she was given.

Karlsen would rather look forward to bringing the Dude Rancher back to its original western elegance.

Annabel and Percy Goan opened the hotel in 1950 with the investment help, legend has it, of five sheep ranchers, Karlsen said.

The ranchers have been immortalized by their livestock brands decorating carpeting in the hotel.

The Goans wanted the hotel to look like a Montana ranch house, compete with open-beam ceilings, mortar squeezing between bricks on exterior walls and pine paneling.

Goan family members sold the hotel to Karlsen 21 years ago.

Karlsen wants to keep the Dude Rancher’s historic roots in downtown Billings without turning it into kitsch.

“The hotel has a western history but not a western theme,” she said.

The renovations will blend historical touches with modern amenities to encourage guests to stay longer.

“The Dude Rancher isn’t just a hotel, it’s a destination,” she said.

The Dude Rancher Lodge was open for business and cleanup was under way on Friday, a day after an early-morning shootout with police officers i…