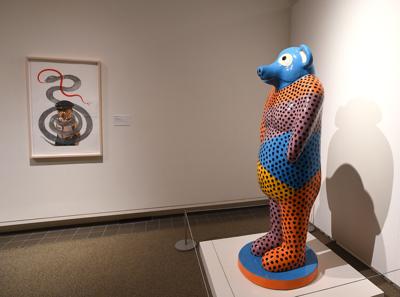 There’s a new face on the second floor of the Yellowstone Art Museum. And what a face it is. It’s blue, and big and round and expressive, with massive white eyes and an enormous snout that’s flat in front and turns slightly upwards.

That face belongs to “Untitled, Tanuki,” a 2014 glazed ceramic sculpture by Japanese American artist Jun Kaneko. The head, complete with rounded ears, sits upon corpulent body speckled with color, with a rotund belly and stubby arms that are ever so slightly pitched forward, like they’re tucked into nonexistent pockets. “Untitled, Tanuki’s” shape suggests that it’s a representation of a bear, and even its posture seems to suggest that. It stands stiff and posed, looking like that taxidermy Kodiak brown bear that used to preside over Scheels when it was in the Rimrock Mall.

But a look at the tag next to “Untitled, Tanuki” reveals that the sculpture is actually the visage of a Japanese raccoon dog. The small canid, which despite superficial similarities isn’t closely related to the raccoons we have in the Americas, is endemic to Japan and has become a folkloric symbol for the country. The mythical tanuki is a sort of trickster being, a jolly joker who has inspired art and cultural references that are so iconic they’ve spilled from Japan into the rest of the world.

But this tanuki makes a good bear too.

That’s sort of cultural partnership and collaboration is at the core of “Global Asias,” the Yellowstone Art Museum exhibition that “Untitled, Tanuki” is a part of. It runs at the YAM until Jan. 15.

The exhibition is filled with work from artists from Asia, or who have Asian heritage. It’s an opportunity for Montanans to see work very different from what we typically think of.

She’s right. The pieces in “Global Asias” defy expectations. Take “Staircase” by South Korean artist Do Ho Suh. It’s a jumbled collection of blue lines against a white background. At first glance, it looks like an ink sketch. But get close and it comes to life. All of those lines are actually thread, weaving in and out, creating something that looks like a three dimensional drawing.

YAM Director Jessica Kay Ruhle raved about the piece, saying she makes everyone she takes through the gallery stop and look at it.

“I just can’t pull myself away,” she said.

Ranallo sees “Staircase” as sort of indicative of the art in “Global Asias” in general.

“It’s that exploration of home,” she explained. “Loosening and leading outward.”

The pieces, Ruhle said, “take really traditional elements and techniques and re-imagine them.”

One particularly bracing example is “HWY 1 in Different Shades of Grey” by Vietnamese American artist Dinh Q. Lê. It’s a huge depiction of “The Terror of War,” Nick Ut’s unforgettable 1972 image of 9-year-old Kim Phúc running naked while screaming after being burned by a napalm attack.

But Lê’s version is a little different from the Pulitzer winning original. The photograph has been cut into strips and interwoven with linen tape. In Lê’s hands, Ut’s blacks and whites become literal blocks of grey.

Lê, who experienced the Vietnam War as a child before his family immigrated to America, uses a traditional grass-mat weaving technique he learned as a child. His work actively combines his past with his present.

That’s also true of Roger Shimomura. Three of his works are on display in “Global Asias.” Each feature scenes from the internment camps people of Japanese descent were forced into during World War II. Shimomura, who was born in America in 1939 to parents who were also born in America, was relocated to camps in Washington and Idaho. His work, about the very real horrors perpetrated on Asian people in America, is painted in a distinctive flat style, almost cartoony, like Japanese artist Hokusai’s classic series “Thirty-six Views of Mount Fuji.”

There was an internment camp less than 100 miles from Billings in Park County, Wyoming, near Powell. The YAM is collaborating with the Heart Mountain Interpretive Center museum on public programing to be held in January, before the exhibition closes.

“Global Asias” doesn’t just disprove preconceived notions about Asian and contemporary art, but of Billings and our surrounding region.

“As someone who is new to Billings,” said Ruhle, who moved here last January, “it’s been a really great opportunity to learn about all of the Asian American communities here in town. So many folks feel truly connected to this exhibition.”

In art, the personal can become collective.

“What I like about exhibitions like this is that you’re able to think about what feels really disctintive and unique to these artists, their lived experiences, and then also what feels universal and relatable for all of us,” Ruhle said. “It think that mix is what I really enjoy talking about with visitors.”

This whole exhibition is about collaboration. Literally. “Global Asias” is a curated display from the collection of Jordan Schnitzer. He’s an art patron out of Portland, and through a foundation allows the exhibitions to be seen in places like Billings, where works like these aren’t even displayed.

But the greatest collaboration might have been the one that allowed the YAM to display “Global Asias” in the first place.

“Untitled, Tanuki,” the giant raccoon dog, is heavy. Very heavy. It clocks in at about 783 pounds. And Kaneko has two more sculptures on display in the exhibition. It’s hard for any gallery to work with pieces that heavy, much less one like the YAM, that operates with a smaller staff.

Help came in the form of Luke Boehuke, whose Missoula-based company Wolf Magritte specializes in art handling, especially rigging, the process by which large, heavy objects can be easily moved and put into place.

“We were anxious about whether or not we’d be enabled to install these pieces,” Ruhle admitted. “So being able to collaborate with someone was really critical to the exhibition. It’s awesome.”

"American Veteran: A Story Without Words," which combines photos of military members with music performed by the Billings Symphony, premiers Saturday night at the Alberta Bair.

The Jake Five: The best double feature of all time

Catch a back-to-back showing of "Where the Wild Things Are" and "The Texas Chainsaw Massacre" at the Babcock this Saturday, the highlight of a holiday week of Billings events.

‘Loud rock and roll, fast:’ Shane de Leon is getting older, but he'll never slow down

The owner of Kirks' Grocery is heading on tour to Billings, Bozeman and Missoula with his band Miss Massive Snowflake, which has lived as many lives as its front man.

Retired Rocky professor Jim Baken calls the project "Dolittlism." For now, he's its only practitioner. And he thinks these animals have something to say that's worth listening to.

The Jake Five: The Nutcracker? Sweet!

Get your halls decked as Billings leaps headlong into the holiday season this week. Here's a rundown of some of the fun.

John Knight's "Special Duties" is a complicated, thrilling installation that should be experienced in person. It's up at the Northcutt Steele gallery at MSUB until Dec. 15.

Michael B. Jordan was offered directing tips from Bradley Cooper and Denzel Washington

Michael B. Jordan was offered directing tips from Bradley Cooper and Denzel Washington 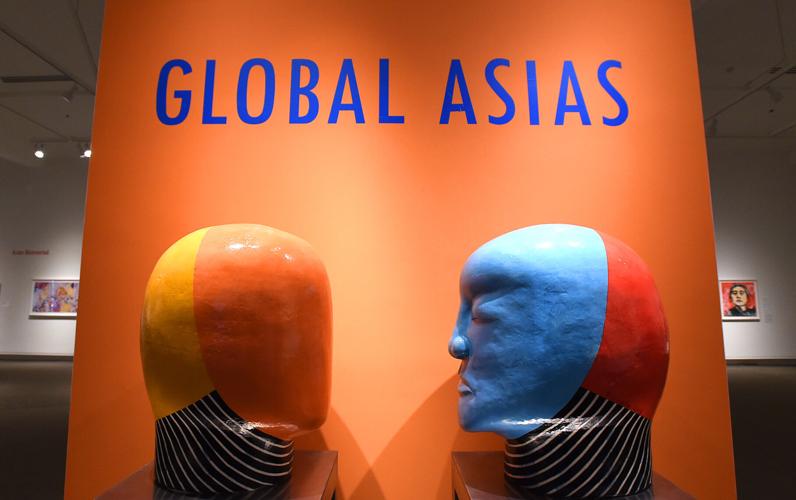 Jun Kameko's "Untitled, Heads" is displayed at the entrance to "Global Asias" at the Yellowstone Art Museum. 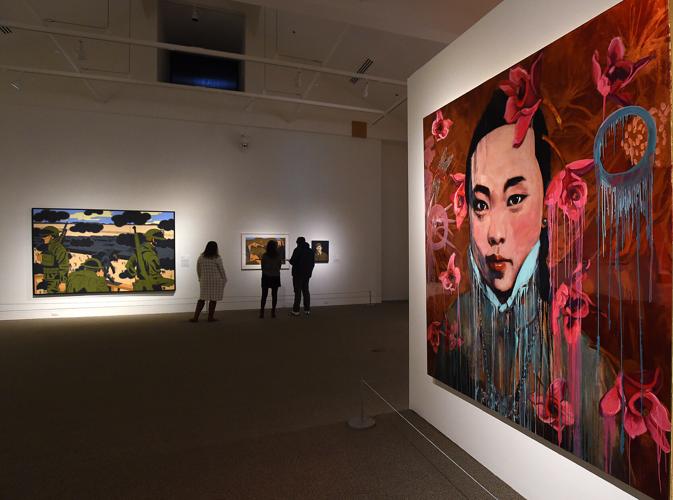 The "Global Asias" exhibition is on display at the Yellowstone Art Museum. 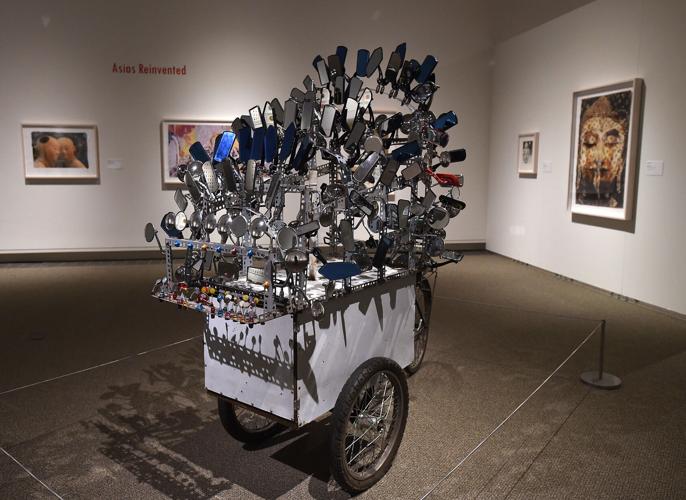 Dinh Q Lê's "I am Large, I Contain Multitudes," a sculputre made from steel, mirors and a tricycle, is part of "Global Asias." 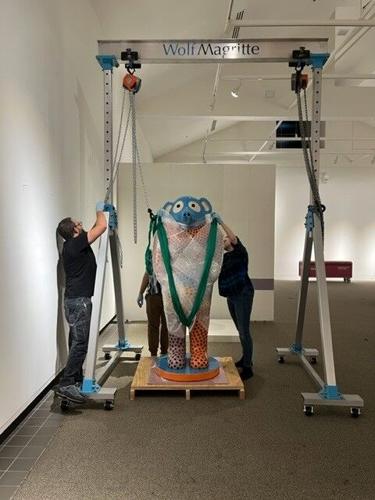 At 783 pounds, "Untitlted Tanuki" required the YAM to work with Luke Boehuke of Wolf Magritte, a Missoula based art handler who specializes in rigging.