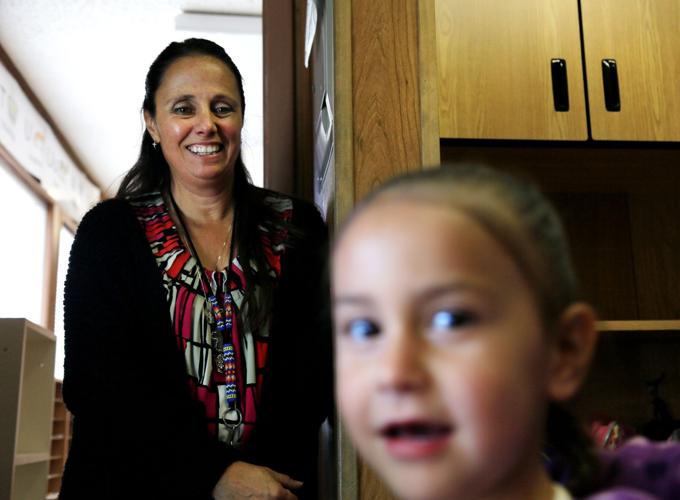 Principal Bambi VanDyke watches as a preschool student heads to lunch at St. Charles Mission School in Pryor on Thursday. 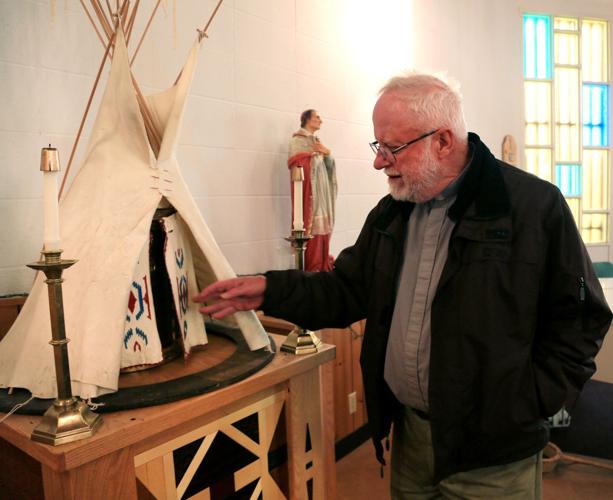 Father Randolph Graczyk adjusts a teepee made for the tabernacle in the chapel at St. Charles Mission School in Pryor on Thursday. Graczyk has been the parish priest at St. Charles for 40 years. 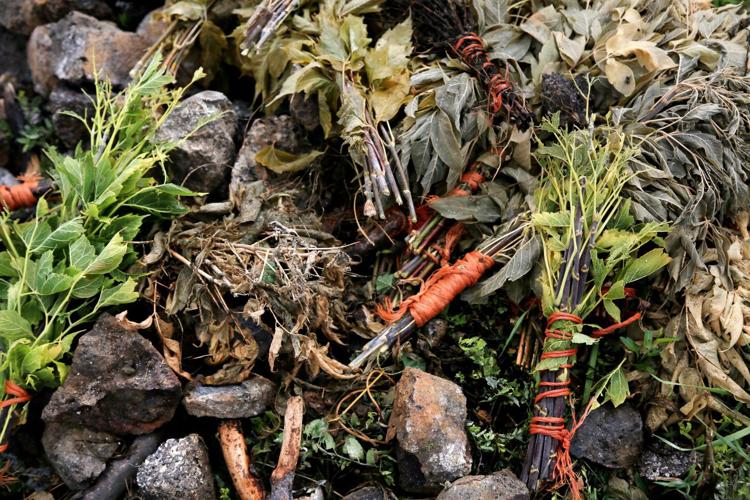 Several different plants and herbs are tied together and left near a sweat lodge outside of Father Randolph Graczyk's home at St. Charles Mission School in Pryor. 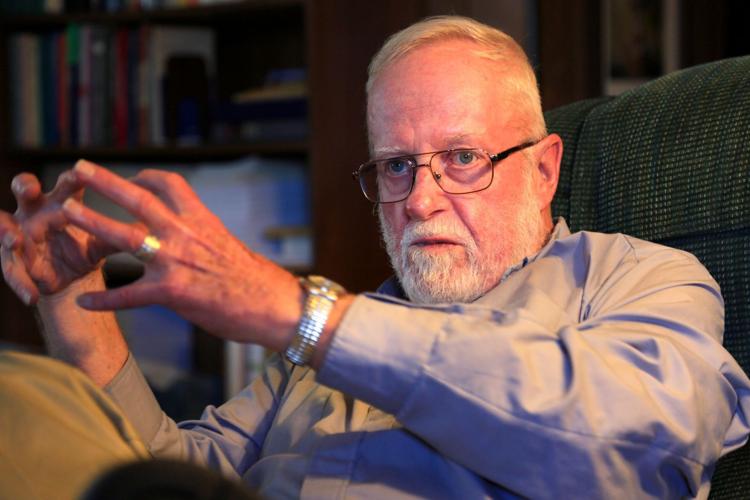 Every Monday morning at St. Charles Mission School in Pryor, students echo the words of Chief Plenty Coups, the last traditional chief of the Crow people.

“Education is your greatest weapon,” they recite. “With education you are the white man’s equal. Without education, you are his victim and so shall remain all of your lives. Study, learn, help one another always. Remember there is only poverty and misery in idleness and dreams. But in work there is self-respect and independence.”

It’s a reminder of the emphasis Plenty Coups put on education and the reason he sent a petition to the Secretary of the Interior on March 14, 1890, asking that the Jesuits be allowed to build a schoolhouse and church in Pryor.

With permission granted, Father Peter Paul Prando built the first chapel in Pryor on land donated by the Crow people. Within a few months, three Ursuline nuns came to Pryor to open a school.

The school and parish will celebrate its 125-year history on Oct. 15. Bishop Michael Warfel of the Diocese of Great Falls-Billings will join Father Randolph Graczyk of St. Charles Parish to say Mass that morning. That will be followed by school tours, talks by Graczyk and Crow Chairman Darrin Old Coyote, and a dinner.

A walk through the private Catholic school on Thursday showed the melding of the Crow culture and Catholicism, with the emphasis on providing the 115 students a solid education. Half of the school’s population, the vast majority who are Crow, come from Billings.

Attendance at the school is free.

A sign in the multipurpose/music room reads: “Akbaatatdic Apsaalooke Ichisshik” (God loves the Crow people). Principal Bambi Van Dyke has the numbers one through 10, written in Crow, taped up in her office.

Van Dyke showed a visitor around as students dressed in polo shirts and pants busily worked in their classrooms. Students from grades kindergarten through eighth grade are housed in the main building.

A separate annex contains the full Crow immersion preschool. Students in that program spend their days learning the Crow language and culture, as well as beginning education skills.

Van Dyke, who’s in her sixth year at the school, is pleased with the progress St. Charles Mission School is making. The school, which operates under the umbrella of St. Labre Catholic Indian Schools, recently was accredited by the Western Catholic Education Association.

With the accreditation came three major goals: focusing on the Crow Culture, the school’s religious identity and on reading.

“Those tell a lot about who we are and what kind of school we have,” Van Dyke said.

For Native American Week, a tepee is assembled, fry bread and pudding are served, and the students take part in a parade and a powwow. For the Christmas concert, the youngsters don headdresses and elk tooth dresses.

In the classroom, in addition to academic studies, students participate in music, art and physical education. Students in grades five through eight also can participate on sports teams, including cross country, volleyball, basketball and track.

They celebrate Mass in the chapel, which is attached to the school. A tepee covers the tabernacle inside.

Graczyk, who has served the parish and school for more than 40 years, presides over the services. A member of the Capuchin religious order and originally from Milwaukee, he came to Lodge Grass in 1970 and the moved to St. Charles in 1975.

But Graczyk's connection to the Crow culture goes back even further.

“As a seminarian I was sent out to Montana for a summer experience for a couple of weeks, and I just kind of fell in love with the reservation,” he said, sitting in his house not far from the school. “I asked to come back when I was ordained, and I’ve been here ever since.”

When Graczyk arrived at Pryor, everyone from babies to adults spoke the Crow language. He’d attend social functions and not understand a word, so the priest began learning how to speak it.

In 1982, Graczyk took a sabbatical and attended the University of Chicago. One year stretched into six, and in that time he earned a Ph.D. in linguistics, specializing in the Crow language.

Over time, the number of Crow language speakers has decreased, he said, something common among many tribes in the United States.

“Today, still, there are several thousand Crow speakers, while many other languages are on the verge of extinction,” Graczyk said.

One of the strengths he sees among the Crow people is how tenaciously they've clung to their culture and their language, “and I think one of the blessings they have is that they’re so rooted in this place.”

Graczyk is very familiar with the Crow culture. He has a sweat lodge in his backyard, and he frequently invites tribal members to join him there.

“I’ve been in the Sun Dance a number of times and I danced in powwows when I was younger,” said Graczyk, whose Indian name is “The Man Who Prays.”

“I’ve been adopted by a Crow family, so I’m related to half the people around here by adoption," he said.

In his four decades at the school, Gracyzk has seen a rise in educational expectations. At first, it was a big deal for students to make it through eighth grade.

“And then graduating from high school became more or less the norm,” Graczyk said. “Now more and more are going to college, so there definitely is progress.”

A Mass will be said by Bishop Michael Warfel of the Great Falls-Billings Diocese and Father Randolph Graczyk of the parish from 1 to 2:30 p.m.

Things to negotiate for besides salary in a job interview

Principal Bambi VanDyke watches as a preschool student heads to lunch at St. Charles Mission School in Pryor on Thursday.

Father Randolph Graczyk adjusts a teepee made for the tabernacle in the chapel at St. Charles Mission School in Pryor on Thursday. Graczyk has been the parish priest at St. Charles for 40 years.

Several different plants and herbs are tied together and left near a sweat lodge outside of Father Randolph Graczyk's home at St. Charles Mission School in Pryor.