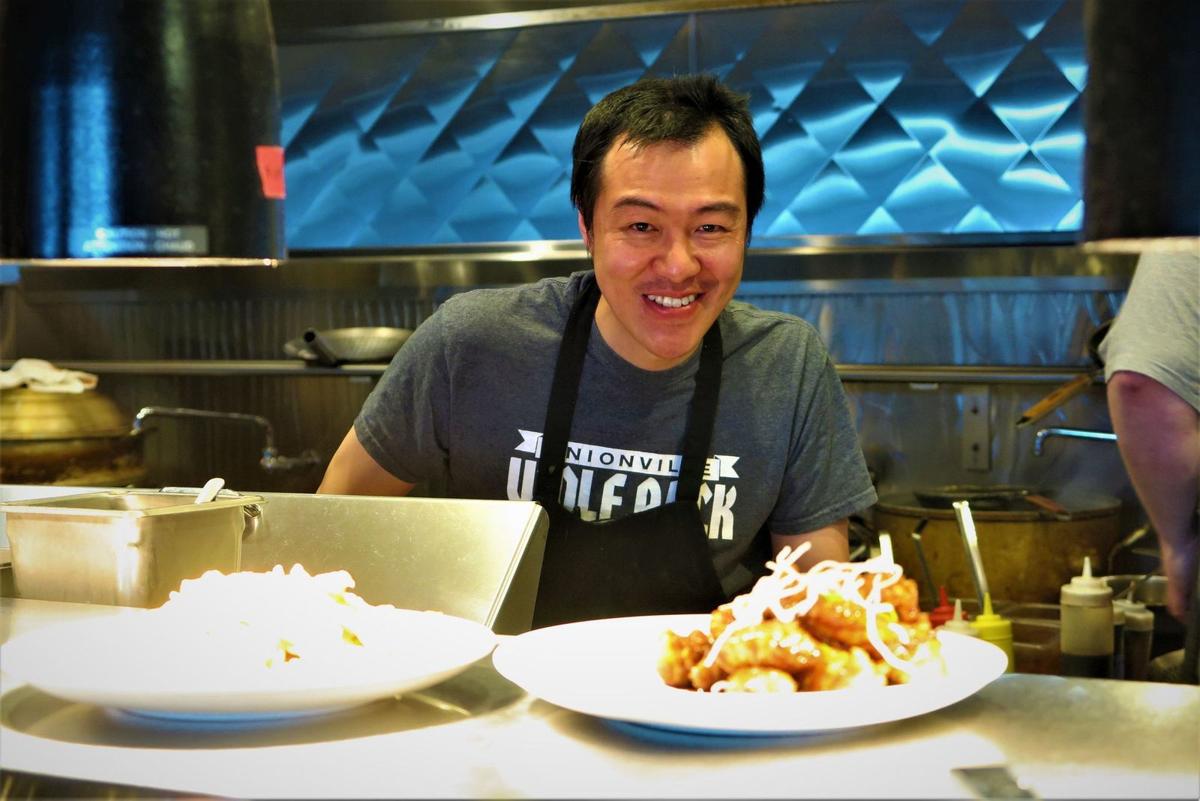 Chef and owner Kalvin Tang of JP Kitchen puts a modern twist on his childhood Cantonese cuisine in a hip space off of 24th Street West in Billings. 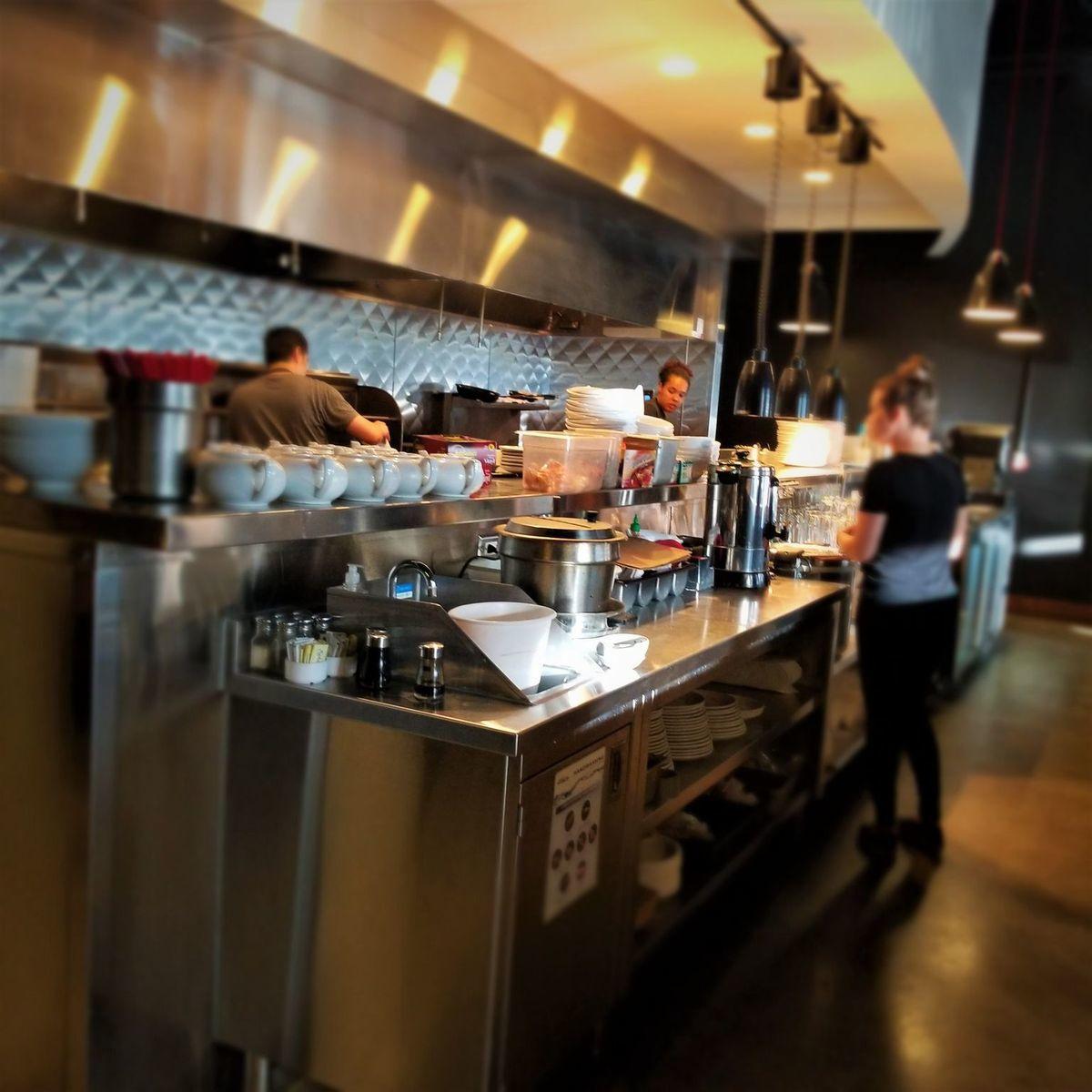 The open kitchen at JP Kitchen is the focal point of the restaurant. 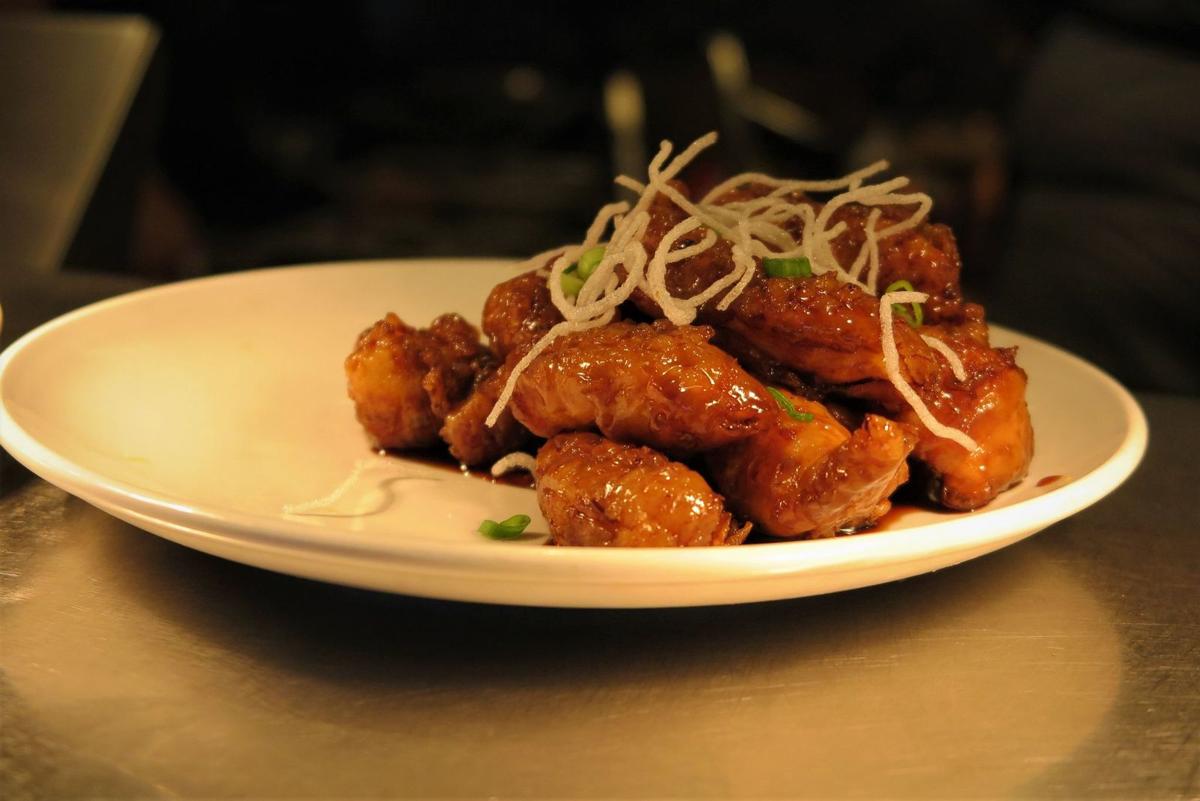 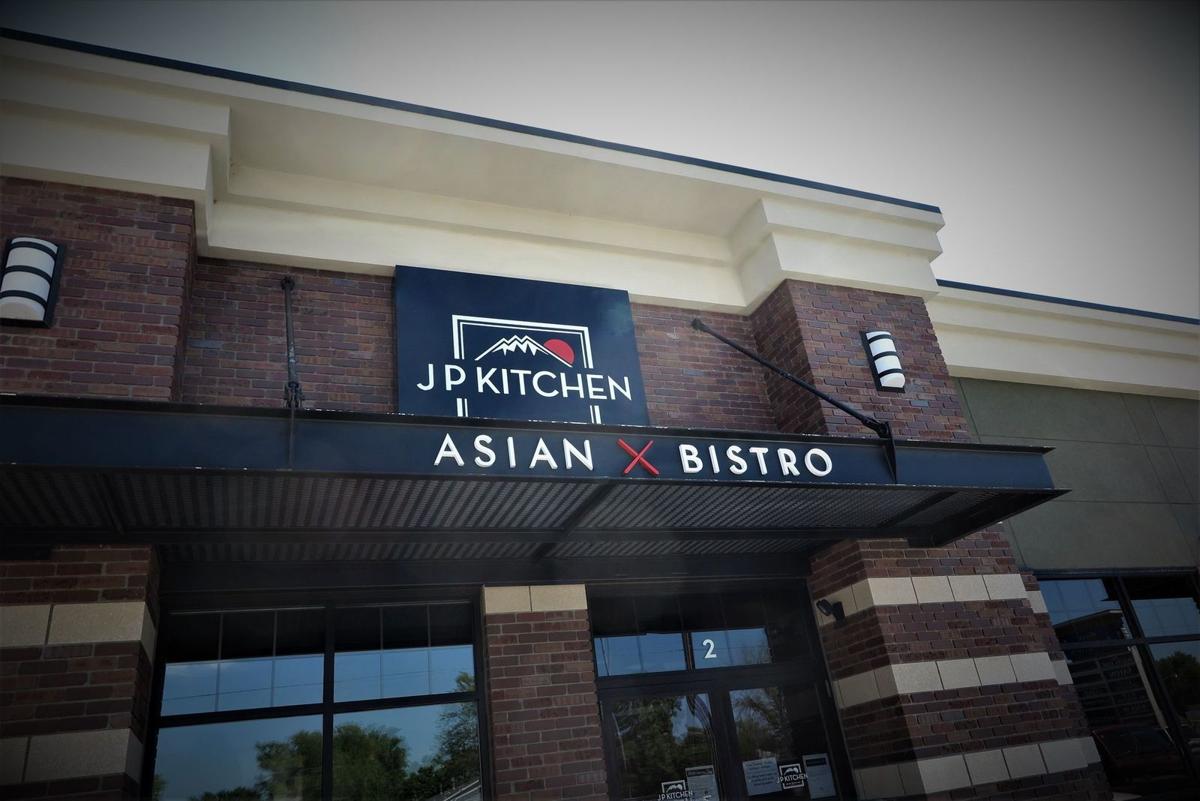 JP Kitchen is located off of 24th Street West in a strip mall next to a casino, but step inside and experience the modern vibes of Chinese eating. 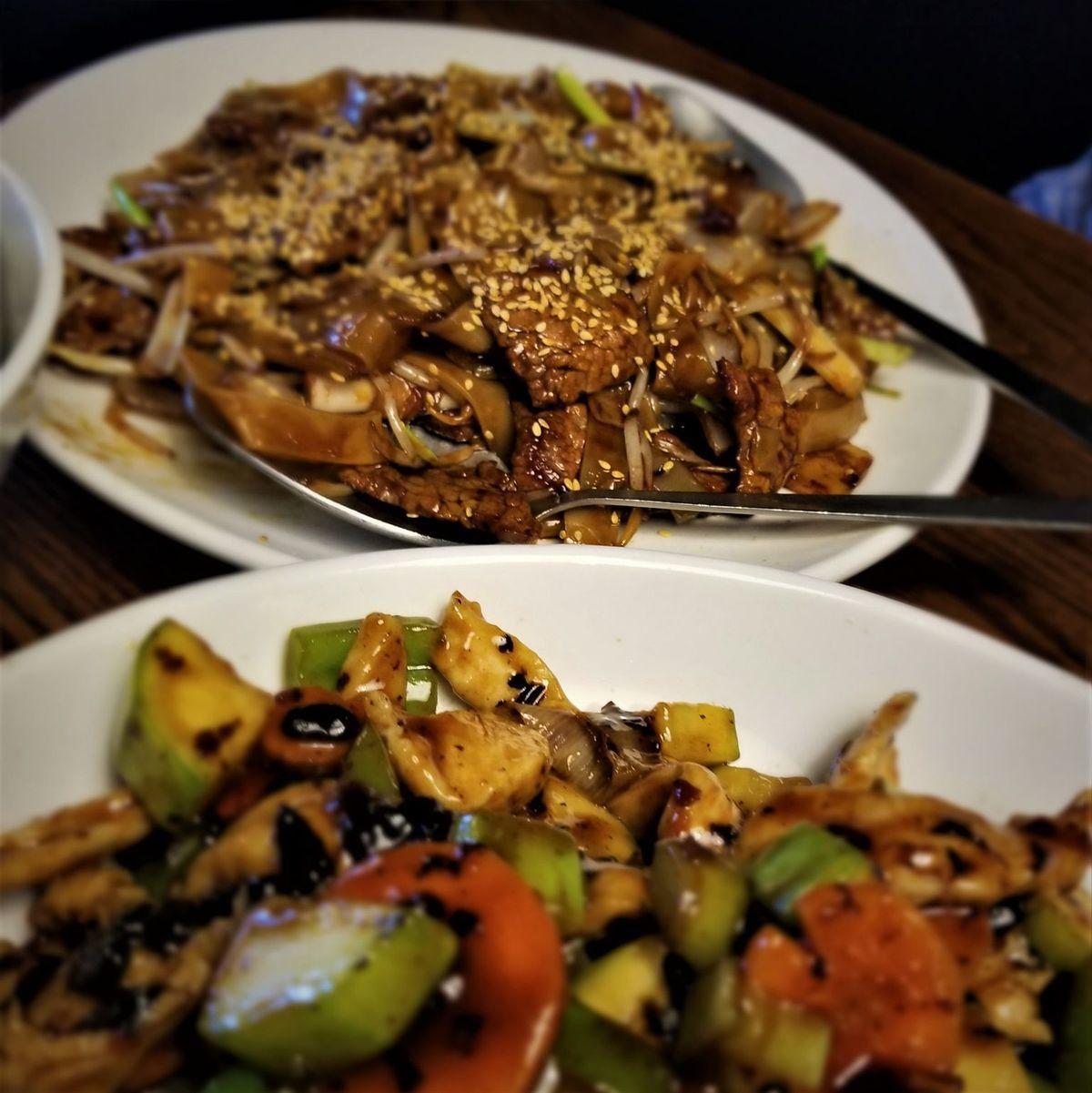 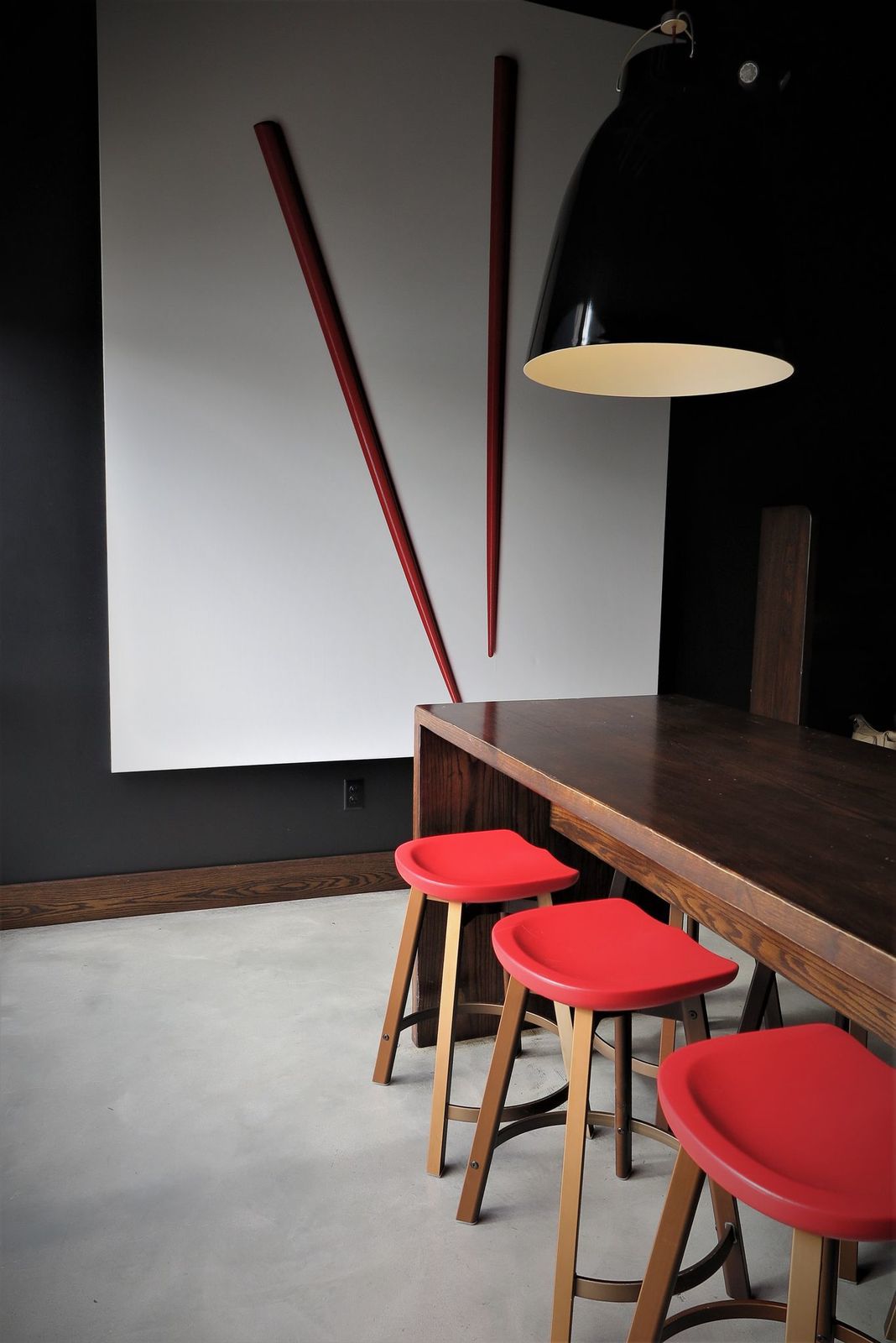 Designer Jeremiah Young of Kibler and Kirch designed a restaurant with black and red as the dominant colors. Red signifies good fortune and power while black, the heavens. 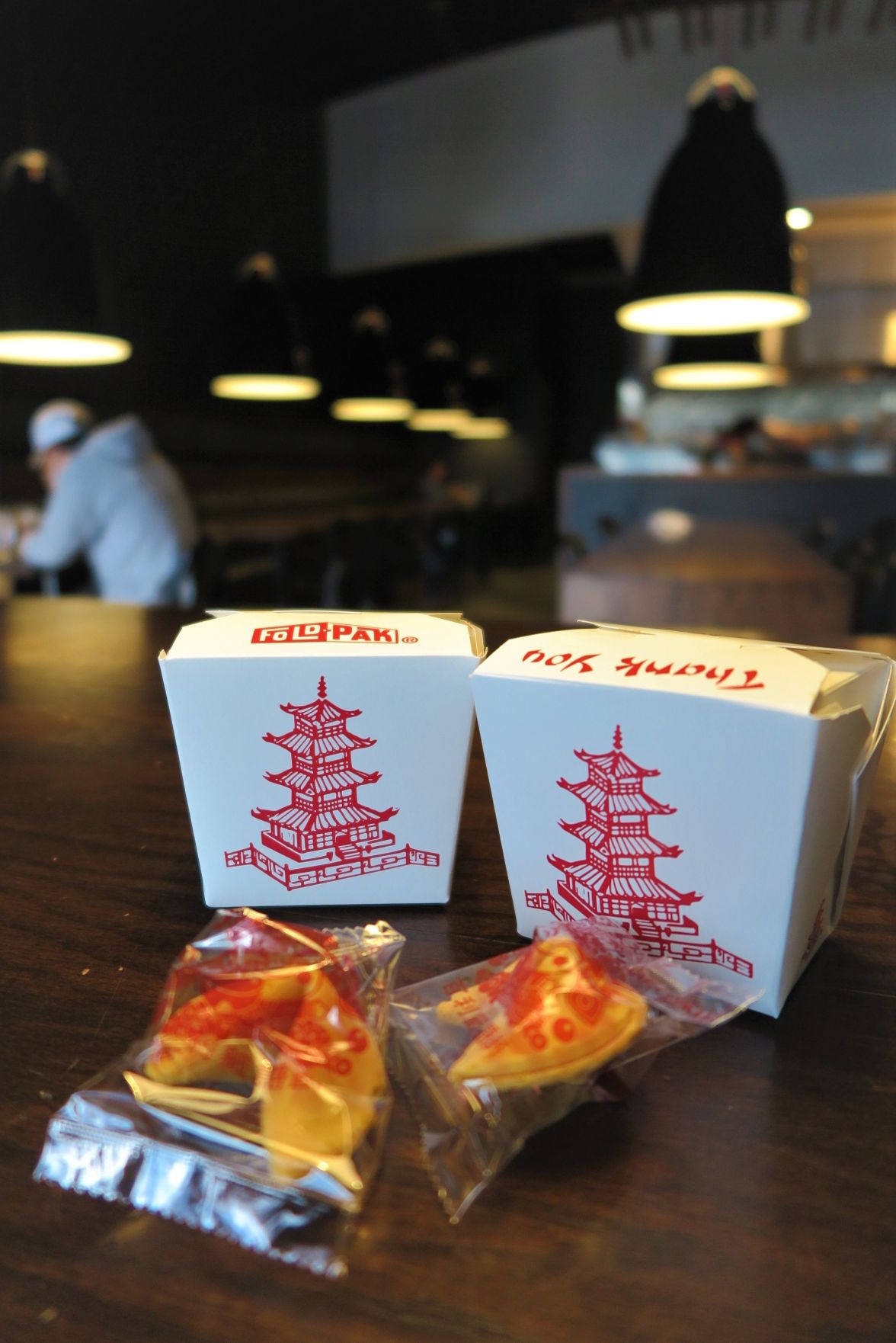 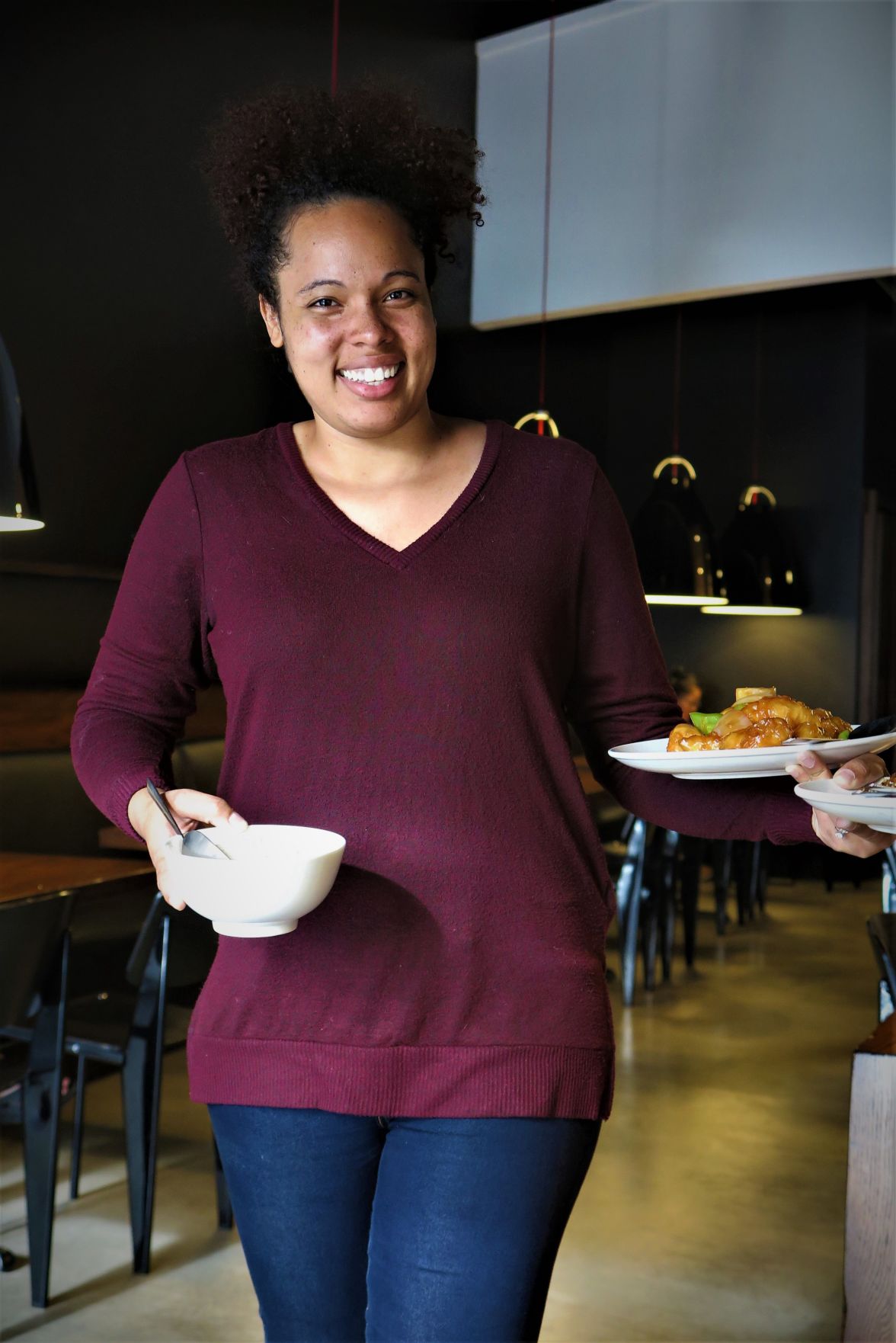 Kiki (Kirsten) Tang, Kalvin's wife, brings sweet and sour chicken and steamed white rice to our table. She works the front of the house while he cooks in the kitchen.

JP Kitchen Asian Bistro provided the safe haven for my reemergence out of COVID isolation. This was my first venture meeting a friend for dinner. Suzi Rietz and I both had second thoughts about eating out, but I felt secure knowing I was meeting a good friend, and then eating foods and flavors that comforted me as a child.

From busy 24th Street West in Billings, I stepped into an entry with vertical wood slats reminiscent of bamboo found in Asian sanctuaries. The dining space with a black backdrop signifying the heavens in the Chinese culture provided a neutral and slick space for highlighting the color red. The stools at the long communal tables and the large chopsticks on the north wall spoke red. The wires, symbolizing "long life," dangled large black pendant lights from the ceiling, were also the color of fire and blood.

At JP Kitchen, owner and chef Kalvin Tang carries on the legacy of his parents. His food is his own, and what he terms as "modernized Chinese," with flavors and ingredients inspired from his upbringing and time working at Jade Palace. When the longest-lived Chinese restaurant in Billings started by his parents Stephen and Selina Tang in 1989 closed about five years ago, Tang decided to open his own eatery months later.

After completing studies in accounting, to earning an MBA, to working in the banking world as a consultant in mergers and acquisitions, he came to a realization. He admitted, "I could not sit at a desk." He held a love for cooking from his Jade Palace days working at the restaurant, and from studying the cooking styles of chefs David Chang of Momofuku in New York City and Charles Phan of The Slanted Door in San Francisco.

"I learned how to cook through osmosis," Tang said. He credited his cousin Sam Ko, who emigrated from Hong Kong to cook in his parents' kitchen, for teaching him the basics. His work ethics came from mom and dad. "My parents did not give us anything. If I wanted something, I would wash dishes" or do other jobs to earn his way, he said.

Tang grew up eating Cantonese food. The true tastes of seafood, meats and vegetables are showcased in this clean style of cooking. Soy sauce, ginger and scallions are the basic seasonings to the foods from Hong Kong and southern China, where his parents are from.

"My favorite meal growing up is hot pot, done in true street side style," Rang recalled. "My dad has decades of ability finding great vegetables, meat, fish, shellfish. A pot of broth, everyone prepares their own food a-la-minute, boiled, so the flavor of everything is clean." Even back then he was experimenting, he said. "My brother and I would make our own peanut sauce," which was not traditional.

On this night Suzi chose the black bean chicken with extra vegetables while I opted for the beef chow fun. The chicken dish arrived at the table glistening with sauce, brimming with vegetables, and dotted with fermented salted black beans. The chow fun exuded savoriness with soy-kissed thick rice noodles or "fun," charred slices of sirloin beef, and speckles of sesame seeds.

Tang's playful and creative cooking he described as "fusion, a little bit more on the authentic side" were found in his bacon fried rice and Sichuan lamb dumplings, as well as his JP wings and drums. In years past, I ordered his smoked salmon fried rice and okonomiyaki, a savory Japanese pancake, but Tang took these off the menu because they did not meet the stereotyped expectations of Chinese food and did not sell well.

The family affair continues with Tang as his wife Kiki (Kirsten) greets guests and wait on tables. Tang's parents left on this day just before opening to limit their exposure to COVID-19. "Dad's a shy guy and hangs out in the kitchen. Mom does a little of everything. Whereever the holes are, she plugs in," he said.

On this night, I found comfort in eating the food carried on by family and socially gathering with a good friend.

Babcock and Miles: Merchants of the Delectable Under the Beartooths

Stella Fong, author of 'Historic Restaurants of Billings and Billings Food' hosts 'Flavors Under the Big Sky: Celebrating the Bounty of the Region' for Yellowstone Public Radio.

TheLastBestPlates.com is a digital destination that serves up Montana's tasty food, travel and culture stories … one bite at a time.

So, what’s for dinner when cooking fatigue sets in?

A website is hiring a 'professional cheeseburger tester.' Here's how you can apply

For burger lovers out there, a dream job has opened up: getting paid to eat cheeseburgers (also, Friday is National Cheeseburger Day).

Farm stands are an old idea whose time had come back.

Dig into them fresh from the oven or save the rest to re-warm for lunches or snacks throughout the week.

How to hard boil eggs perfectly every time

This basic recipe let’s you choose the egg you want from softly boiled to hard-set and everywhere in between. It is the best way to make perfect boiled eggs every single time.

An apple cider doughnut recipe to transport you to the orchard

You don’t have to make a fall day trip to get this seasonal favorite — you can make them yourself at home.

How to make an easy pumpkin cake

There are plenty of delicious desserts you can create by using a boxed cake mix, one of them being the popular dump cake that is an easy dessert with five ingredients or fewer.

Nothing says ‘summer’ like tomatoes, so make this dish before the seasons change

Nothing tastes better than a fresh tomato right from the garden or farmers market, and now’s the perfect time of year to indulge.

Recipe of the Day: Pumpkin Soup

It's never too early to begin cooking fall recipes, and this pumpkin soup is the perfect place to start.

Chef and owner Kalvin Tang of JP Kitchen puts a modern twist on his childhood Cantonese cuisine in a hip space off of 24th Street West in Billings.

The open kitchen at JP Kitchen is the focal point of the restaurant.

JP Kitchen is located off of 24th Street West in a strip mall next to a casino, but step inside and experience the modern vibes of Chinese eating.

Designer Jeremiah Young of Kibler and Kirch designed a restaurant with black and red as the dominant colors. Red signifies good fortune and power while black, the heavens.

Kiki (Kirsten) Tang, Kalvin's wife, brings sweet and sour chicken and steamed white rice to our table. She works the front of the house while he cooks in the kitchen.