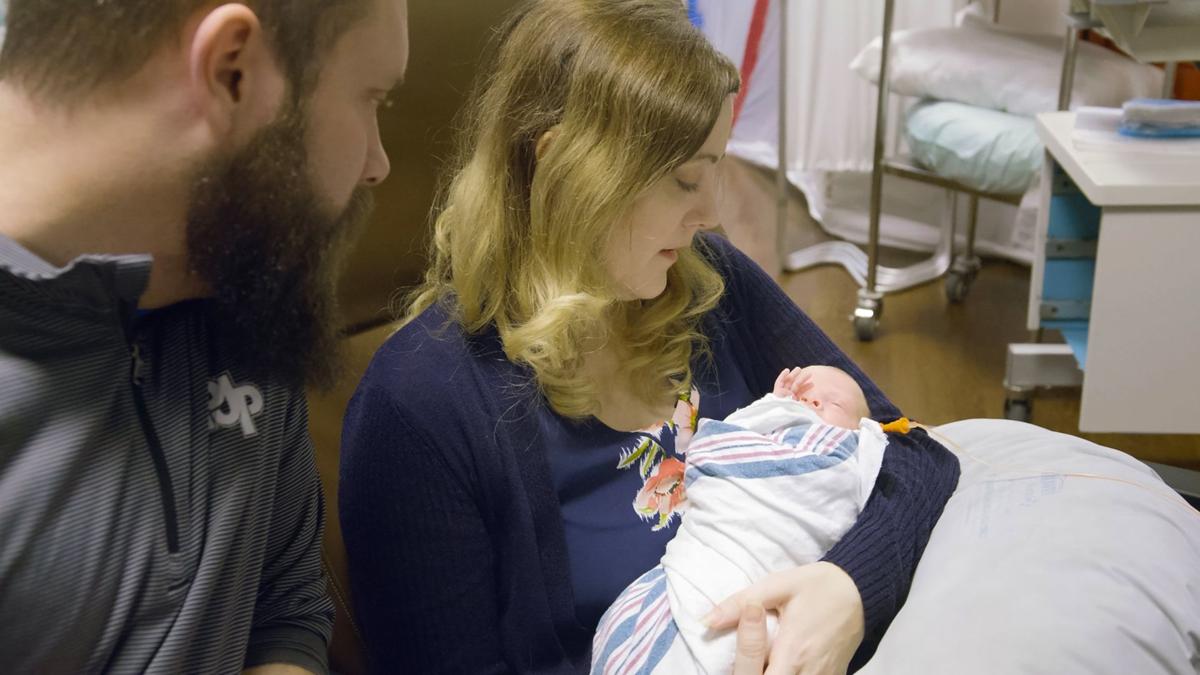 Drew and Jennifer Gobrecht look at their son Benjamin Thomas Gobrecht, the second baby in the United States to be born from a transplanted uterus from a deceased donor. They called his birth "a miracle." 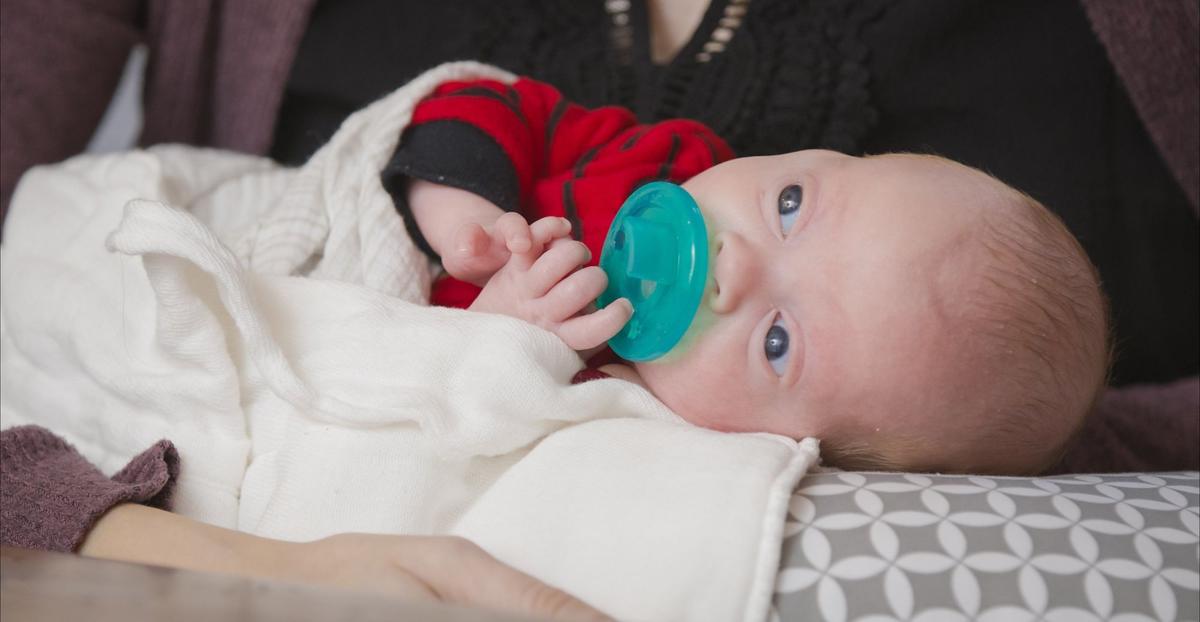 Benjamin Thomas Gobrecht was born in November in Philadelphia to Jennifer Gobrecht via cesarean section as part of an ongoing trial to study uterine transplantation as a treatment option for women facing infertility.

PHILADELPHIA — Jennifer Gobrecht always knew she would be a mother someday, but her birth experience was one she couldn't have imagined.

She learned as a teen she was born without a uterus. For her body, pregnancy and birth were impossibilities.

Now, Jennifer is the mother of the second baby in the United States to ever have been born from the transplanted uterus of a deceased donor.

Gobrecht, 33, successfully gave birth via cesarean section to Benjamin Thomas Gobrecht in November as part of an ongoing trial to study uterine transplantation as a treatment option for women facing infertility, Penn Medicine in Philadelphia announced on Thursday.

Jennifer and her husband Drew Gobrecht, 32, who live outside of Philadelphia, called Benjamin's birth "a miracle."

"Benjamin means so much, not just to Drew and I, but to so many others, and hopefully he'll be able to inspire other couples to try this because it worked and he's here," Jennifer said.

'We always knew that we'd have a family'

The uterus, or womb, is the organ where a baby grows when a woman is pregnant, and sometimes certain disorders can affect the development of the organ.

For Jennifer, she found out when she was 17 that she was born without a uterus due to a rare condition called Mayer-Rokitansky-Küster-Hauser syndrome, or MRKH.

One of the "red flags," she said, was that she never got her period.

"We were friends first, and I'm always transparent with my friends, letting them know, 'Hey, I have this condition, it's something about me but it's not completely defining who I am,' " Jennifer said.

"When Drew and I started dating romantically, we always knew that we'd have a family of some sort, whether it be through adoption or surrogacy," she said. "That was always our vision that we had."

It's estimated that uterine factor infertility — in which abnormalities of the womb, such as MRKH, can hinder a woman's chances of becoming pregnant — affect up to 1 in 500 reproductive-age women worldwide.

Due to ongoing research, experimental treatment options for the condition now include uterine transplantation.

Before learning that uterus transplantation could be an option for them, Jennifer and Drew already knew about previous cases of women with transplanted uteruses giving birth.

"Being in a community that is the uterine factor infertility community, anything new and exciting is always interesting just to know about," Jennifer said, adding that she considered applying for the Penn Medicine trial after seeing it mentioned in a Facebook group.

Initially, Drew was skeptical about whether his family would be selected to participate in the trial. What encouraged him to remain hopeful was Jennifer.

"Jen and I were at home talking about whether or not we wanted to participate in this trial, and I'm thinking, 'There's all these risks involved and there's a really good chance that we don't end up with a child out of this.' I wasn't not interested in the trial, but I wanted to make sure that this was the right decision for us," Drew said.

"Then Jen said to me that she didn't want to just participate in this for her and for us as a way to start a family. She wanted the opportunity to potentially help other women who suffer from infertility by being a part of this exploration of the new science," he said. "That was the thing that really sold me."

Jennifer applied to participate and was selected as the first patient in Penn Medicine's uterus transplant trial.

"It was surreal," Drew said.

As part of the trial, the couple then had to wait for a donor uterus. Once a donor became available, Jennifer underwent transplantation surgery to receive the organ.

The 10-hour uterus transplant procedure involved placing the organ, shaped like an upside-down pear, correctly in the pelvis and connecting blood vessels from the donor uterus to Jennifer's blood vessels. A successful transplantation even means that the recipient will menstruate. For most recipients, it would be for the first time.

Jennifer took medications following the surgery to reduce the risk of her body rejecting the organ.

Dr. Paige Porrett, an assistant professor of transplant surgery at Penn Medicine who oversaw Jennifer's transplantation, said that, with uterine transplantation, the organ is typically removed once a baby is delivered, as was the case for Jennifer. Once the uterus is removed, medications are no longer necessary.

Six months after Jennifer's transplantation surgery, physicians were able to directly transfer an embryo — previously made from Jennifer's egg and Drew's sperm — into Jennifer's new uterus.

Jennifer then had to wait 10 days before receiving blood test results to confirm that the embryo transfer was successful and she in fact was pregnant.

"Those 10 days waiting for that phone call was probably the longest 10 days of our lives," Jennifer said.

The call came from Dr. Kathleen O'Neill, an assistant professor of obstetrics and gynecology at Penn Medicine, who oversaw Jennifer's gynecologic care.

"The second we got the call, Dr. O'Neill wasted no time to tell us we were pregnant," she said. "It's hard to put into words just how much that moment was one of the best moments of my entire life."

Jennifer added that both she and Drew "broke down into tears" at the news that she was pregnant. At that moment, their journey to starting a family felt complete.

"We never thought it was an option for us," Drew said about the pregnancy.

"We just didn't consider uterus transplant as a possibility. It was just, 'Oh this is a cool news story that will probably help women in the future some day.' ... It's still all sinking in," he said. "One of the most primal urges many of us feel is one to start a family, and the more options people have, people who suffer from infertility, the better."

Jennifer, Drew and Benjamin are now doing well as a new family.

The mother of Jennifer's donor, who wishes to remain unnamed, said in a press release from Penn Medicine that her family is "extremely proud" to be a part of Jennifer's journey. The Gift of Life donor Program coordinated the organ donation.

"Our family is extremely proud to support transplantation that will enable more women to experience the joy of childbirth. My daughter was the best mother I ever knew; nothing was more important to her than her children. What a beautiful and fitting legacy for her to help give the gift of motherhood to another woman," said the mother of the donor. "Our hearts and prayers go out to my daughter's recipients and their families."

What the future holds

"Women can have uterine factor infertility because they were born without a uterus or a large number of women who applied to our trial had their uterus removed for numerous reasons," such as traumatic birth complications, hemorrhage or fibroids, O'Neill said.

She added that "women also can have nonfunctional uteri" and be candidates for transplantation surgery.

At Penn Medicine, O'Neill said that medical teams and researchers already have completed two successful uterine transplantations, including Jennifer's, and they are planning five in total.

"It's still experimental and done under the research trial," O'Neill said, but her hope for the future is for the procedure to be available as a fertility treatment option and possibly even covered by insurance.

More cases could help researchers to better understand the intricacies and key biologic questions that persist in organ transplantation, women's reproductive biology and pregnancy. More research also could allow for researchers to pinpoint other potential benefits, outside of birth, that could come with uterine transplantation.

To date, there have been only about 70 uterus transplants globally, according to Penn Medicine.

In 2017, a baby girl in Brazil became the first baby in the world to be born following a uterus transplantation from a deceased donor. Until then, successful births only had been documented in transplants from living donors.

She added that Penn Medicine is the only clinic in the United States still recruiting and accepting new patients for its uterine transplantation trial.

"It doesn't mean it's not without risk, but the outcomes have been good," she said. "We've achieved the objective to deliver babies."