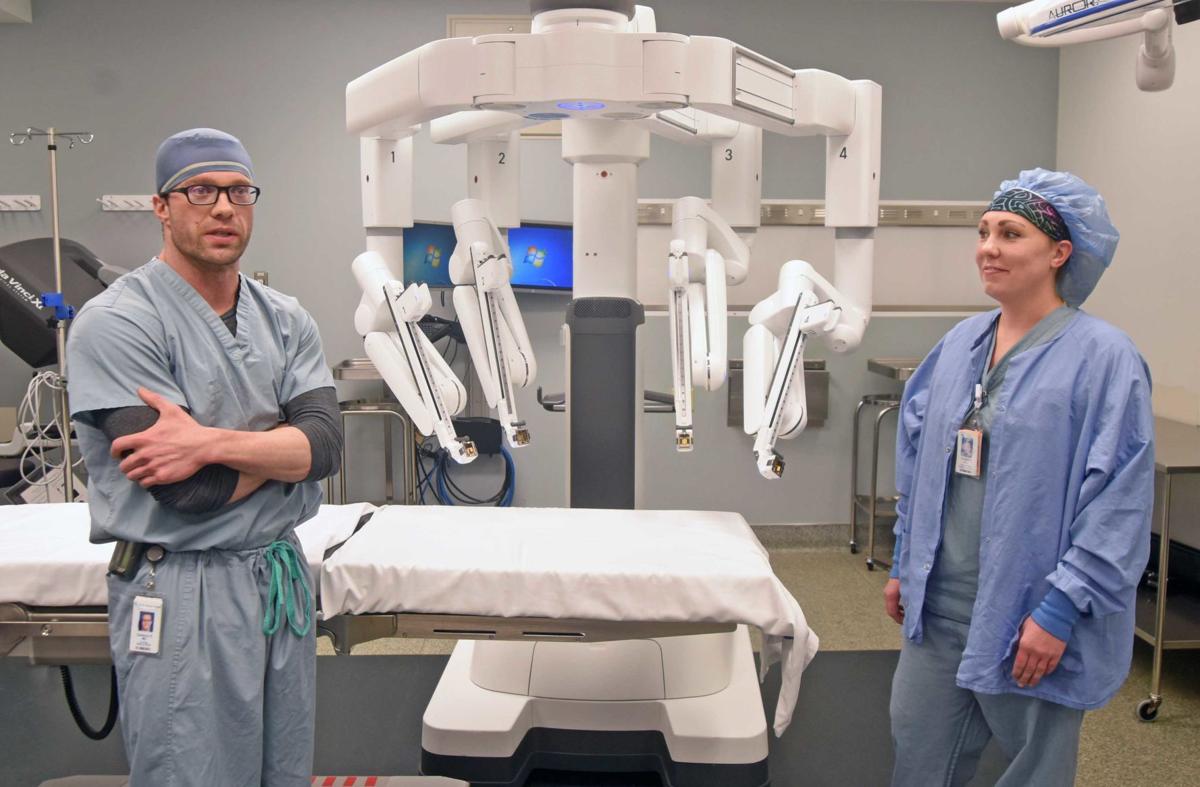 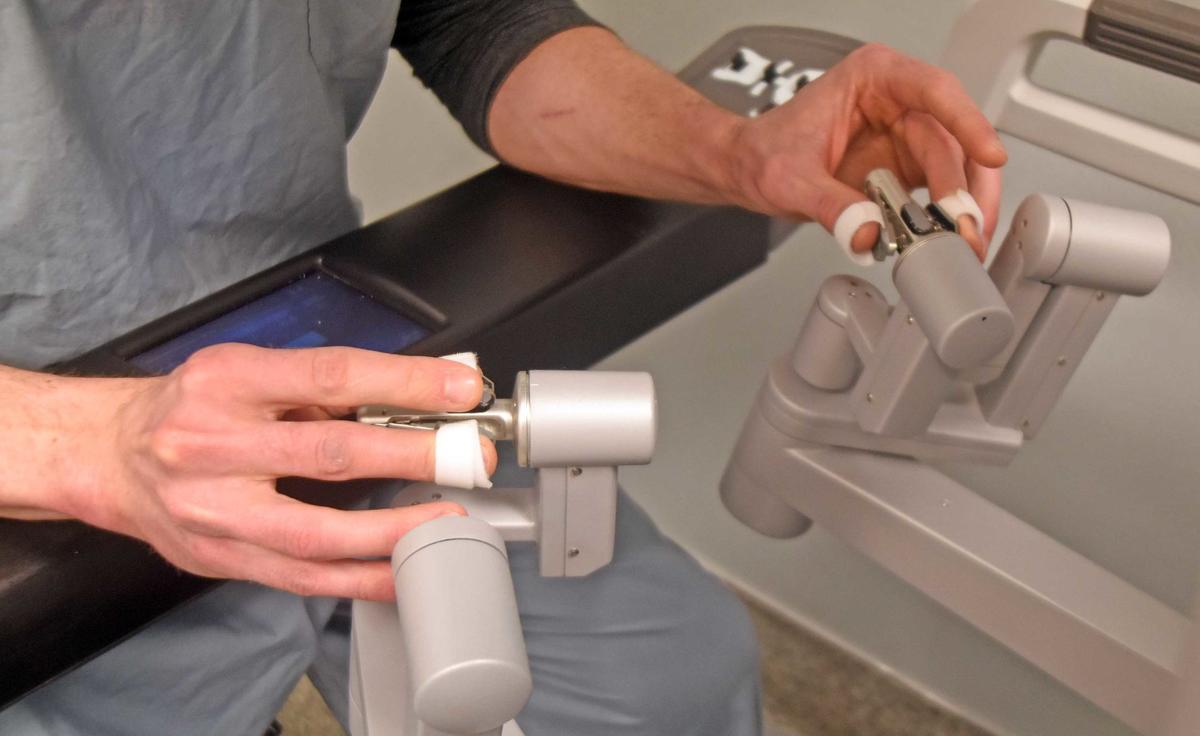 Dr. Cameron Charchenko operates the da Vinci Xi robot using controls between the middle finger and thumb of each hand. 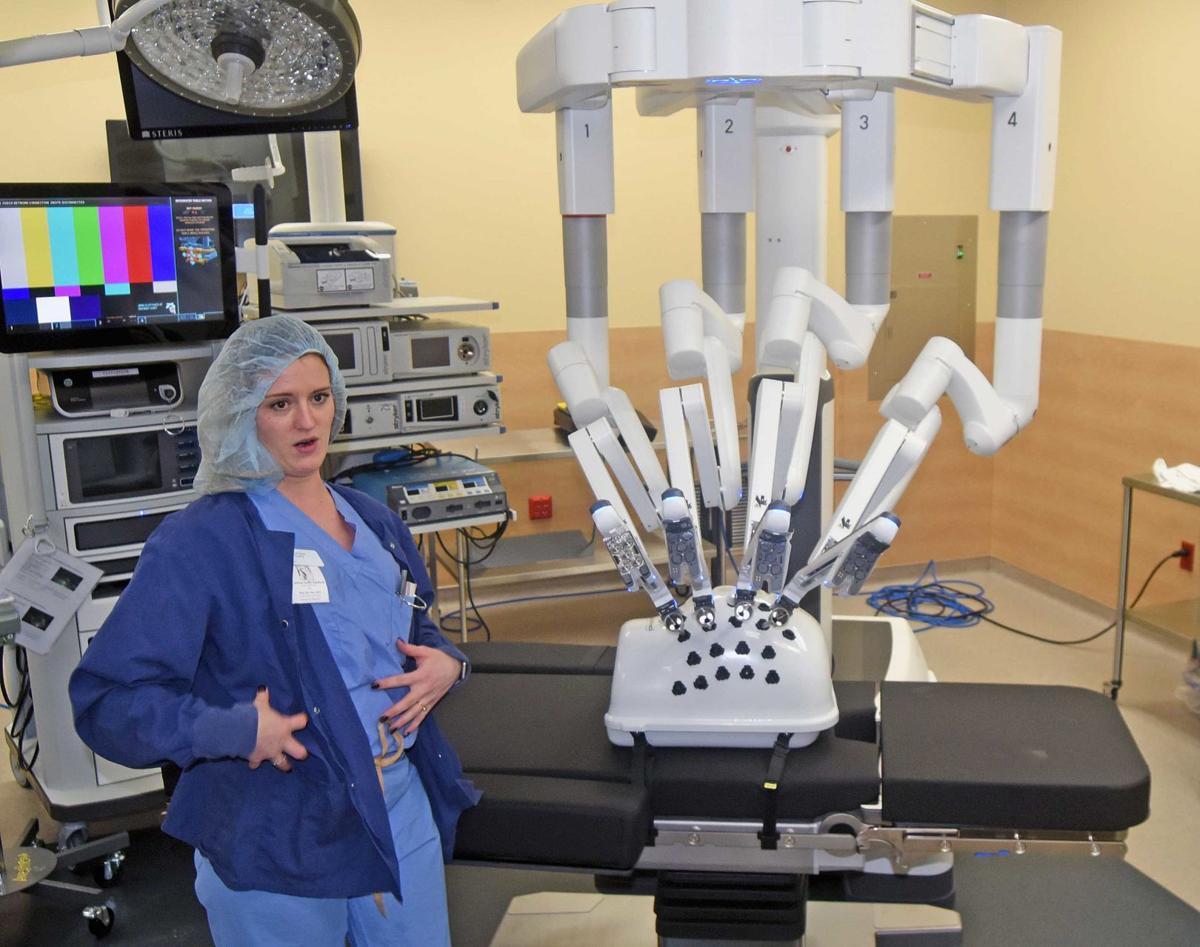 Carissa Gaffy at Sanford explains how the precise dexterity of a da Vinci Xi robot benefits surgeons in upper torso surgeries. Gaffy-Sanford is a da Vinci clinical associate who has been training in the use of the new robot at Sanford Health in Bismarck. For a video of Gaffy-Sanford demonstrating the robot, go to www.bismarcktribune.com.

It’s a little more than two weeks since Diane Gladowski, 79, had surgery on her abdomen to repair a hernia, and she’s surprised by how quickly she’s recovering.

She’s had surgery before — a hysterectomy, an appendectomy, gallbladder surgery — that left her laid up in an opiate-induced haze for weeks. This time, she went home the same day as the surgery, needed only two opioid pain pills to recover and is already able to perform her favorite type of exercise — waltzing to a classical music program on TV.

“I was usually in the hospital, what, five days at least, after all the other surgeries. And then you went home and were still in pain and didn’t do anything,” said Gladowski, of Bismarck. “I was amazed at how quickly I was able to go do things again. I remind myself, ‘You only had surgery a week ago.’”

What made the difference this time is that her surgeon had a special assistant: a robot.

Though robot-assisted surgeries have been used in certain types of operations for more than a decade, Sanford Health in Bismarck recently acquired the most advanced version of one robot, which doctors say will enable them to perform more general operations such as hernia repairs.

Instead of operating on patients through large incisions, robotic surgeries utilize a series of smaller incisions that miniaturized surgical instruments can fit through. The smaller cuts, coupled with the precision that a robotic arm provides, lead to less pain, scarring, recovery time and opioid use after surgery, doctors say.

Knudson, 38, has been a surgeon at Sanford Bismarck for six years. He was trained in on an older version of the robot earlier this year and started using the new version within the last few months. Gladowski’s case was the first hernia surgery to be performed using the new robot at the hospital.

Hernia surgery is one of the most common non-urgent surgeries in the U.S., with about a million people a year undergoing some type of hernia repair. A hernia happens when an internal part of the body pushes through the muscles of the abdominal wall, causing a bulge in the abdomen. The most common type of hernia seen at Sanford are inguinal, or groin hernias, but the kind Gladowski had is called an incisional hernia, because it was caused by incisions from previous surgeries.

Knudson became a believer in the robot after seeing improved recovery in his patients.

“I have never seen somebody come back two weeks later and say that they’ve only taken two pain pills, and she’s been back exercising like normal. Most people are looking for another two more weeks of light activity before even thinking about going back to work. And that’s been kind of an eye-opener for me,” Knudson said. “I was not expecting to see the benefit that I have seen.”

Robot and its uses

The robot, called the da Vinci Xi, looks like a prop from a Star Wars movie set. It has four extendable arms, each attached to surgical instruments and a miniature camera, enabling the surgeon sitting at a control console nearby to have an improved view of the operation, as well as an increased range of motion with operating tools than is possible with traditional surgery.

With an average price tag between $1.5 million and $2.2 million, the da Vinci Xi doesn’t come cheap, but hospitals across the state have it, including Bismarck’s other hospital, CHI St. Alexius.

Cameron Charchenko, a urologist and robotic surgery specialist at St. Alexius, has performed 140 surgeries using the da Vinci Xi since he started there in January 2017.

“Urology is progressing to the point where almost any surgery that you do open, you can do robotically, so we try and use it for the majority of our surgeries,” Charchenko said. “I would say 80% to 90% of my large surgeries are done robotically.”

The robot has been around for “many years” in urology, whereas other specialties are just starting to branch out into it, such as general surgery, gynecology and cardiovascular surgery, he said. The high cost keeps some health systems from acquiring it, but Charchenko said it mostly depends on surgeons and providers’ willingness to adopt the new technology.

The most common surgical procedure he performs are prostatectomies, or removal of the prostate, at about 40-50 a year. Nearly all of them are done using the robot, which has become standard across his specialty.

Charchenko agrees with Knudson that the biggest benefit of the robot is being able to utilize smaller incisions to perform the same surgery, causing less pain and reducing recovery time for his patients.

“With the robot you have the dexterity of the human hand, so I can sew in very small places,” Charchenko said. “You have a very good view. You can make very small movements and be very precise with what the robot offers in regards to optics and dexterity of movement.”

Charchenko said the main question that his patients have about the robotic operation is who is actually performing the surgery -- the robot or the surgeon?

“It’s good to know that the robot is not autonomous. If I don't move, it doesn't do anything," he said.

Gladowski said she wasn’t nervous when Knudson told her he’d be performing the surgery using a robot, but her first question to him tells another story.

“I just looked at him and said, ‘You’re going to put a robot in that room with me? Where are you going to be?’” she said.

Human-to-human transmission confirmed in China coronavirus: What you need to know

Human-to-human transmission of coronavirus was confirmed in China. Here's what you need to know and video of the market linked to the virus' spread.

Alcohol vs tobacco: Not as different as you might think

The risks associated with tobacco use are widely known around the world. Tobacco is responsible for approximately 7 million deaths each year a…

Avoiding the risk of slips, trips and falls

For good reason, falls are a major concern among older adults. Falls are a leading cause of injury in older adults and strategies to lower you…

Resolutions for a healthier Billings community

We’re half way through January, but it’s not too late to resolve to live healthier.

Making changes to your Medicare enrollment

Your questions on Medicare and Medicaid answered by the local State Health Insurance Assistance Program (SHIP) an objective, not-for-profit co…

JACKSON, Wyo. — An operation to kill the mountain goats that have invaded Grand Teton National Park and threaten the existence of the park's s… 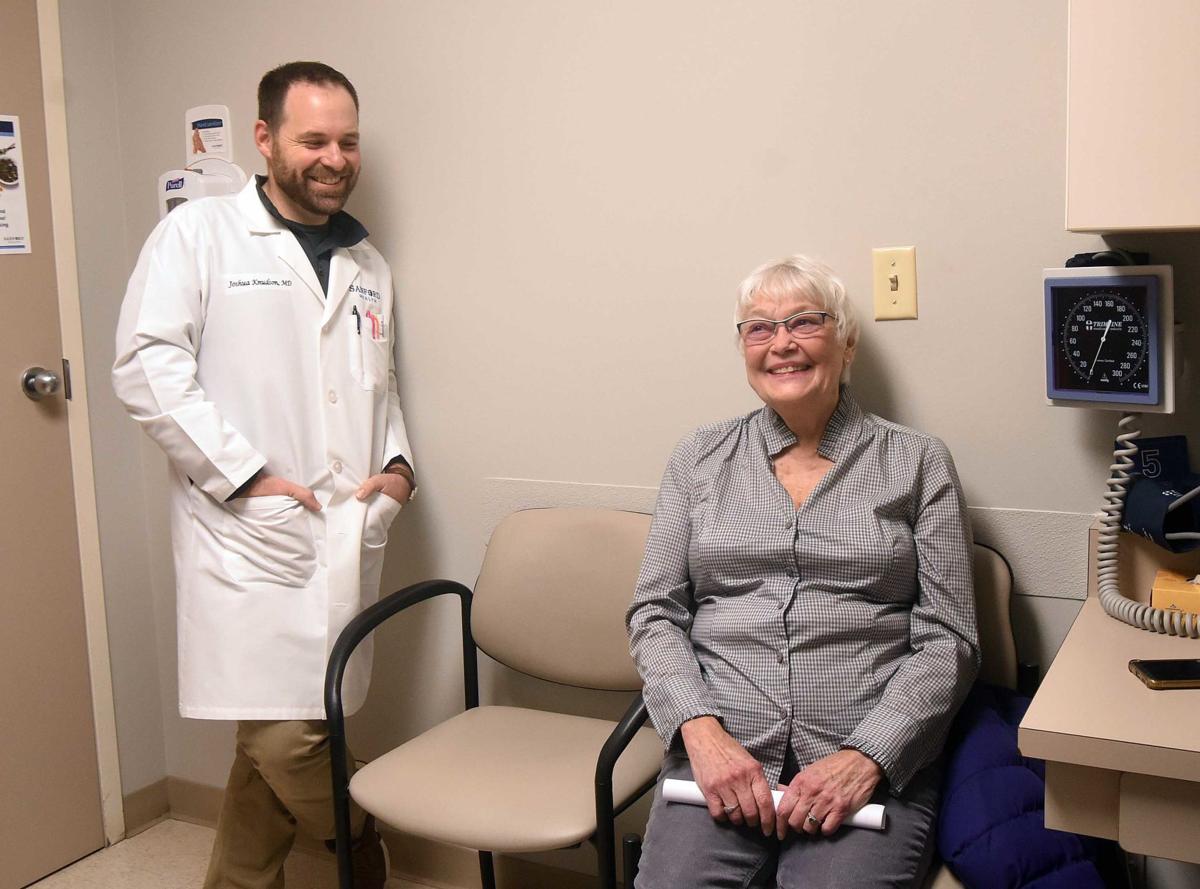 Josh Knudson, left, performed a surgery on Diane Gladowski on Oct. 22 at Sanford Health in Bismarck.

Dr. Cameron Charchenko operates the da Vinci Xi robot using controls between the middle finger and thumb of each hand.

Carissa Gaffy at Sanford explains how the precise dexterity of a da Vinci Xi robot benefits surgeons in upper torso surgeries. Gaffy-Sanford is a da Vinci clinical associate who has been training in the use of the new robot at Sanford Health in Bismarck. For a video of Gaffy-Sanford demonstrating the robot, go to www.bismarcktribune.com.