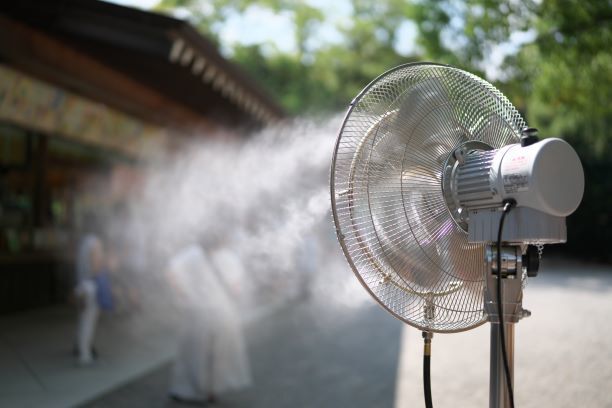 Misting fans are a great way to cool down an outdoor space during the hot summer months. 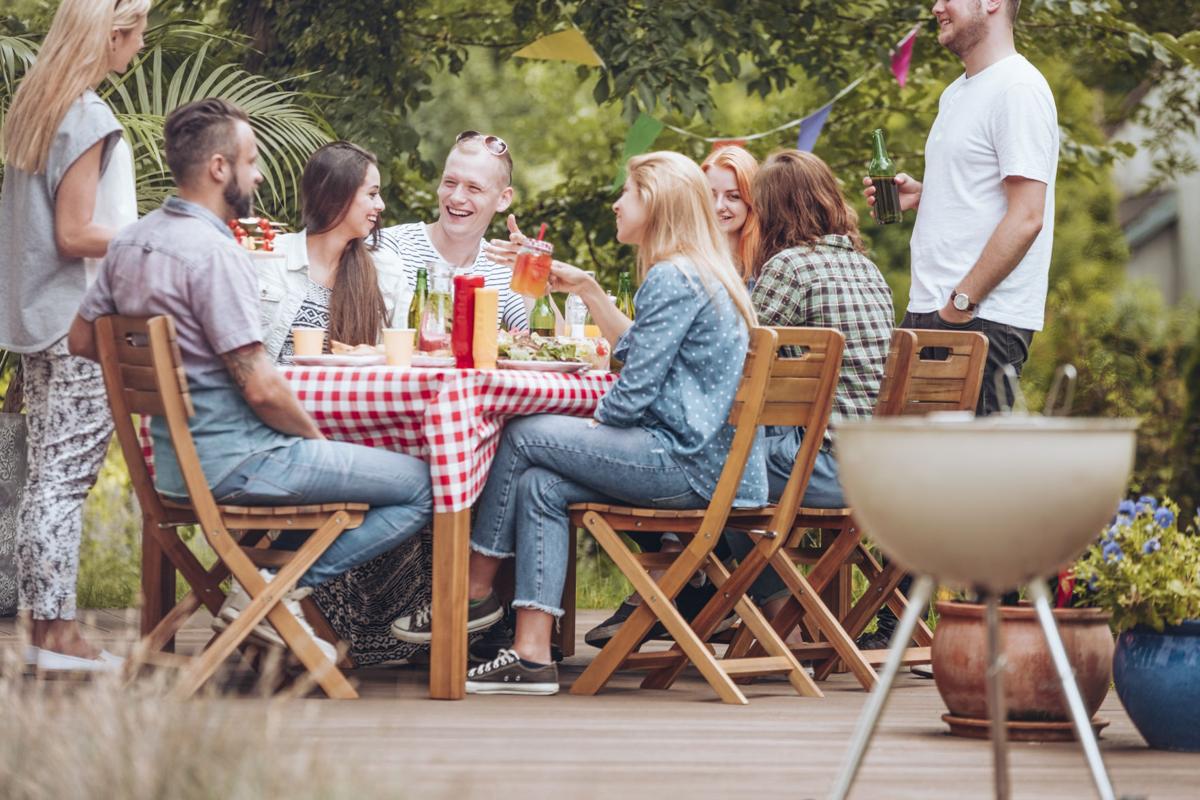 Forced indoors to escape the heat? Sitting inside in the AC does not compare to a seat under the stars on a summer night. As you examine choices for cooling your outdoor space, you’ll need to weigh each option’s pros and cons.

Evaporative coolers, also known as swamp coolers, employ the principles of evaporation to cool. Portable evaporative coolers can be placed on patios or decks and cool the air around them while using a quarter of the electricity of an AC unit.

However, evaporative coolers come by their nickname honestly. The water dampened pad the air passes through to be cooled collects dirt, mold, and other allergens. These trapped particles give the air it expels a swampy odor, especially if the coolers are not drained and cleaned at least once a month. Another downside is they tend to be noisy and take up ample floor space.

Misting fans are a great option for cooling down an outdoor space and they work best in arid climates such as ours. As water evaporates it takes the heat in the air with it, lowering the temperature by harnessing the same technology your body uses when it sweats. Misting fans can lower the ambient temperature by as much as 30 to 40 degrees Fahrenheit.

Misting fans can be a simple portable ground fan or a ceiling fan that’s hardwired into an overhead pergola. Misting ceiling fans are mounted and wired similar to a typical ceiling fan but require a plumbed water source. As with all ceiling fans, 3 blades are best for optimum airflow.

Portable misting fans are inexpensive and connect to either a garden hose or have an internal tank you fill ahead of time. Even easier, you can purchase a misting ring that attaches to any standard fan and converts it to a misting fan.

Misting fans are remarkably efficient with both with water and energy, and they possess benefits that go beyond cooling. For example, the mist created by misting fans cleans the air of contaminates as it cools it, improving the air quality. Unlike evaporative coolers, misting fans actually reduce pollutants and odors in the air.

These fans are an especially good option when the installation of a ceiling fan is not possible. They’re portable, relatively inexpensive, and when used indoors, high velocity fans have been known to cool so well they replace air conditioning.

The downside? They’re noisy. As a fan’s ability to move air increases so does its noise. But if you do your research, there are high velocity fans you don’t have to yell over while visiting with friends. Sometimes it’s worth paying up for cooling without the noise.

Mixing water and electricity should be treated with caution, and a professional consulted for anything hard-wired. When operating a portable evaporative cooler or misting fan, be sure it’s plugged into a GFI protected outlet. This way if the water and the electricity do mix, the outlet will trip and shut down the electricity.

Stay safe and cool while you make the most of these long, hot summer days.

With our home & garden newsletter!

Q: In January, my grandson and three of his friends agreed to rent a four-bedroom apartment near the campus starting in August, when school was supposed to resume. They signed the lease in January. The four students each signed separate leases (with parents co-signing), and each student put up two months of rent upfront, totaling $1,600 each.

Buying Guide: This puzzle for pooches is a best seller on Amazon

Distract your destructive dog with this fun puzzle toy. 🐕

Keep your mail and deliveries safe and dry by replacing an old, weather-worn mailbox with a new, double-wall resin box designed to withstand the rigors of weather and an altercation with a car or truck mirror. A new mailbox defining your property at the end of a driveway makes a positive impression about your home, and you’ll find an array of choices when it comes to these mailboxes in home centers, specialty catalogs and online.

Ask the Builder: In bathrooms, form should follow function

My childhood home had a pedestal sink. In the wall tile, there were two tiny alcoves, one for a drinking glass and the other for hand soap. There was also a wonderful ceramic toothbrush holder with four holes that protruded from the wall. I don’t recall electric hair dryers, curling irons, or any other modern appliance back then, although a few people might have had them in the 1950s.

Because a wet phone is a dead phone.

When you’re spending more time in your own home, you’ve probably considered a few ways you can spruce up your space without major renovations. Adding a removable wallpaper is a quick and simple way to add a pop of color to your space, whether you want to brighten up your stair risers, create a welcoming entryway, or add an accent wall. The best part is that it’s completely temporary so you can pick another pattern or color each time you need a refresh. Here are 4 picks that will brighten up your space this summer.

Whether you're a seasoned at home schooling or supplementing online learning, these tactile cubes make math fun.

Misting fans are a great way to cool down an outdoor space during the hot summer months.