Darth or Kylo? Based on Social Security Administration data of names given to babies over time, browse the popularity of names used in the Star Wars franchise. 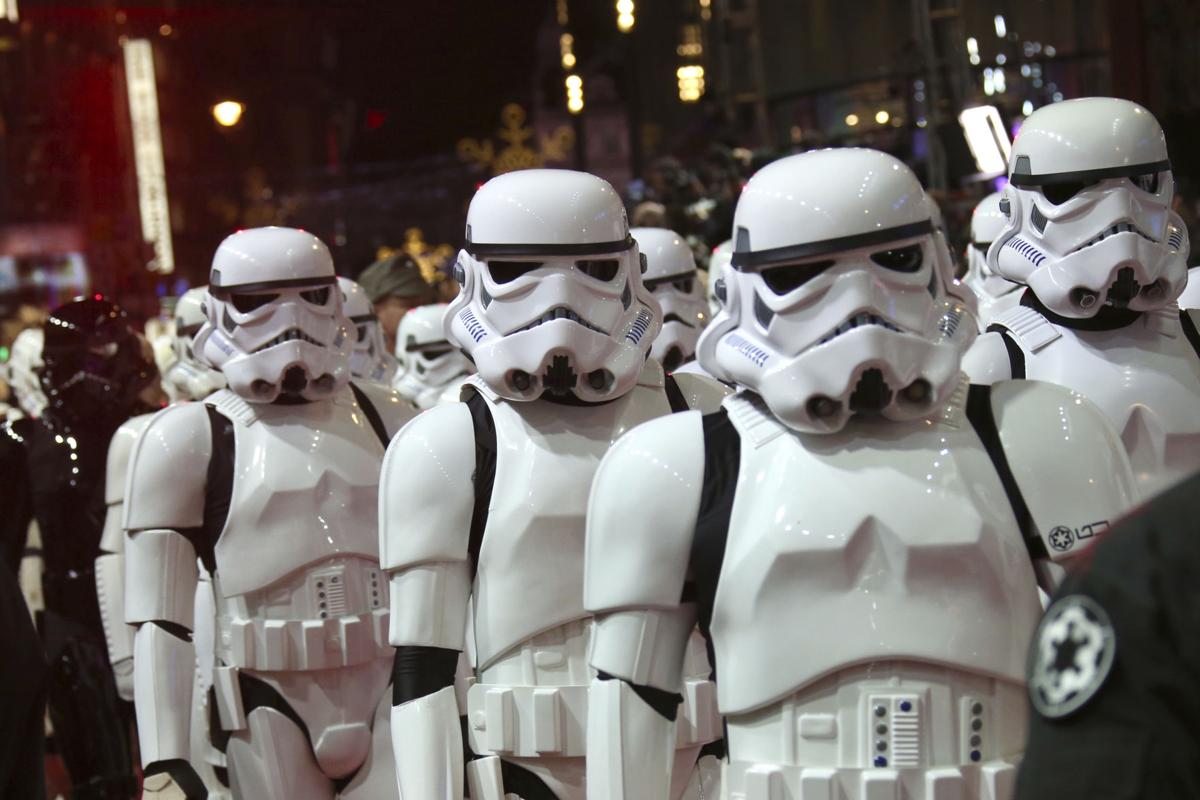 Called "eternally popular" by Forbes, the "Star Wars" franchise is among the most beloved, recognizable, successful and enduring movie series in the history of film. The now eight-movie series (five more are planned) boasts the third-highest franchise box office gross revenue on record, but that doesn't begin to account for the brand's success.

From phone cases to action figures, bed sheets, stationery and lunch boxes, Star Wars is arguably the most universally merchandised film series of all time. Although today's children are just as fascinated as their parents and grandparents with the saga, those that were kids for the original filmes are now somewhere close to 50 years old. According to the New York Times, Star Wars has managed to connect middle-aged fans to their childhoods like no other film series in history.

With legions of loyal fans -- from toddlers to the elderly -- obsessing over the tiniest fragments of Star Wars minutia, the films have actually had a measurable impact on our country's culture, including how people name their children. MooseRoots used Social Security Administration data to find out the popularity of names used in the Star Wars franchise among new parents.

A bit of a Helen of Troy character, Pluma Sodi is captured by Otua Blank in the Clone Wars as his unwilling bride. The Kage woman is kept in a chest and guarded by Boba Fett as Kage warriors attempt to rescue her.

The name has sharply dropped in popularity since the 1880s.

Poe Dameron is an ace pilot who takes on the Empire from the cockpit of an X-Wing Fighter. Although he is a popular character, the same can not be said for his name. The last time more than four boys were born with the name Poe was when five joined the Force in 2012.

Academy Award winner Lupita Nyong'o will portray space pirate Maz Kanata in "The Force Awakens." Only five baby boys were born with the name Maz in 2013, the last year more than four were recorded. The name may remain so unusual, in part, because her character was called "Rose" on set to prevent film spoilers.

Although the character is a woman, fewer than five girls have been born with the name Maz in any given year.

Arguably the most famous villain in movie history, Darth Vader was a heroic Jedi Knight until a series of calamities seduced him to the Dark Side. His unmitigated evil must have been a turnoff for new parents. A relatively popular female name in the early 1900s, there haven't been more than four girls given the name Vader since 1925.

The Twi'lek child who made a home for herself in the underground tunnels of Nabat was instrumentally helpful to General Obi-Wan Kenobi during the Clone Wars. With her help, he was able to stop the droid forces in Nabat and free the Twi'leks.

Numa has never been a terribly popular name, but it's experienced a steady decline since the late 1930s.

An "embodiment of death," Darth is a title, not a name, awarded only to the most ferocious Sith lords. The last time more than four boys were given the name Darth was when seven were born in 1978 -- a year after the release of the original Star Wars film.

Aggressive and strong with the Force, Kylo Ren is known for his unique lightsaber and quick temper. "The Force Awakens" was announced in 2012, by 2014 eight boys were born with the name Kylo.

After selling out his friends to the Dark Side, Lando Calrissian redeemed himself to become a key rebel figure. Although just four boys were named Lando in 2014, the name reached its peak of popularity with 25 in 1980 -- the year "The Empire Strikes Back" introduced Lando Calrissian to the world.

Famous for spotting a trap set by the Empire, Admiral Ackbar was first introduced in "Return of the Jedi" during the Battle of Endor. The traditional Indian and Hindi name Akbar (slightly different in spelling) is on a steep downward decline, with just nine boys born with the name in the U.S. in 2014.

Obi-Wan Kenobi is a legendary Jedi who mentored Luke Skywalker and trained his father, who would go on to become Darth Vader. Still fairly popular in the U.K., there were just 12 American baby boys named Obi in 2014.

Courageous and optimistic, Padme Amidala was both a senator and queen of Naboo. With 14 girls born with the name Padme in 2014, the name has become more popular since the release of "Revenge of the Sith" in 2005.

The Millennium Falcon is smuggler Han Solo's legendary starship, which played a role in some of the Rebel Alliance's most important and daring missions. Just 18 boys were named Falcon in 2014, but the name peaked in 2013, when 23 babies were given the name.

The unlikely hero of the original trilogy, Han Solo evolves from a renegade co-pilot to a general for the Rebel Alliance.

The popularity of the name Han has risen and fallen since the 1960s, though it's never been a particularly popular name.

Though the term is, of course, not unique to Star Wars, the Rebels are the last, best hope against the Empire. The number of boys named Rebel stayed pretty much the same between 1954 and 2004, but the name has experienced a recent surge in popularity, from 10 in 2006 to 55 in 2013. Forty-six boys were born with the name Rebel in 2014.

Mace Windu is known for his purple lightsaber and lack of patience with the squabbling Senate. In 1998, there were just eight boys named Mace, a trend that had remained fairly steady for more than a century. In 1999, however, "The Phantom Menace" was released, and the name jumped back into popularity. In 2014, 61 boys were named Mace.

Elite but outnumbered, Kage Warriors are locked in an ongoing battle in "The Clone Wars." The number of boys named Kage has remained relatively neutral since 1995 compared to the overall population, but the name saw an uptick when "The Clone Wars" came out in 2008. There were 84 born in 2014, compared to 54 in 2007.

Admiral Kilian is a stickler for the rules who is taken hostage by bounty hunters. At 91, more boys were born with the name Killian in the United States than anywhere else; but per capita, the name is far more popular in Switzerland and Northern Ireland.

Anakin Skywalker was so talented that he was believed by some to be the Jedi "Chosen One" before descending into the forces of the Dark Side. The name Anakin became far more popular in 1999 with the release of "The Phantom Menace" than it had been in previous years -- a trend that continues today. Over 200 boys were named Anakin in 2014.

Although the tough survivor from the deserts of Jakku is female in "The Force Awakens," the name Rey is steadily rising in popularity among boys in the United States. Over 240 were born in 2014, up from just 46 in 1980.

Ben Quadinaros participated in the pod race that freed Anakin Skywalker from a life as a slave. Short for Benjamin, Bennet or Benedict, the name Ben has steadily decreased in popularity in the United States over the last century. It was the 43rd most popular boys name in 1889, but ranks No. 723 today.

After transitioning from space pirate to bounty hunter, Kiera Swan has a price on her head wherever she goes. The year 2007 was the peak for Kiera -- that year, it broke into the top 300 most common female names. Nearly 500 girls were named Kiera in 2014, barely cracking the top 600.

Sister of Luke Skywalker and daughter of Anakin Skywalker, Princess Leia is one of the most legendary rebel heroes in history. Although the name Leia did gain traction when the original Star Wars film was released in 1977, the name has greatly increased in popularity over the last few years explode with 605 baby girls named Leia in 2014.

Finn is a warrior with a conscience struggling to escape his past. Although the traditional Nordic name briefly fell out of favor around 1990, it has seen an extraordinary rise in popularity in recent years. Over 770 boys named Finn were born in 2014, making it the the 234th most popular boys name in the country.

Uncle to young Luke Skywalker, Owen Lars scratched out a living on his farm on Tatooine. With 9,100 boys born with the name in 2014, Owen is the 36th most popular boys name in America, following a steep rise in popularity that began in 1994.

Born a humble farm boy, Luke Skywalker -- son of Anakin Skywalker -- would grow up to become the greatest Jedi in the Universe. The 28th most popular name in America, there were 10,431 boys born with the name Luke in 2014. The name has seen a steady increase in popularity since the first Star Wars film was released in 1977, but to be fair, a character named Luke was also featured prominently in a different best-selling book -- the Bible.

How popular is your name now?

Baby Names With the Biggest Drops in 2015

Baby Names With the Biggest Gains in 2015

How popular is your name now?

Popularity-minded readers beware: The moniker bestowed on you by your own parents may be on …