Packers vs. Rams: Follow the latest scores and updates from the NFL playoffs

25 years later: Politics, myths and the reintroduction of wolves to Yellowstone
Share this
{{featured_button_text}}
BRETT FRENCH

In the same year that Yellowstone National Park marks the 25th anniversary of gray wolf reintroduction, Colorado voters will have the power to pass or reject an initiative that would require its state wildlife division to reintroduce wolves by 2023.

“For the first time voters will determine whether they want the state to reintroduce wolves to that state,” said Jonathan Proctor of the conservation group Defenders of Wildlife, which sponsored the signature gathering for the initiative.

“If this goes as we hope and we pass this, we will have wolf connectivity across the entire Rocky Mountains from Alaska to Mexico,” he added. “Colorado is the missing link.”

That link began to be rebuilt on Jan. 12, 1995. On that day under tight security, eight wolves that had been live-trapped in Canada were hustled into a secret enclosure inside Yellowstone where they would be kept to acclimate to their new surroundings.

In March 1995 the wolves, along with another group of 14 more Canadian wolves, were released into the park where they have since thrived at a level of about 100 wolves. The same year four wolves were released into Idaho’s Frank Church-River of No Return Wilderness.

There’s no doubt in Mike Phillips’ mind that the wolf reintroduction was the most important wildlife restoration project ever conceived and executed in the United States. As the park’s lead biologist at the time, Phillips oversaw the work, calling it an “historic conservation success.”

Given the controversy surrounding wolves — which were slaughtered into extinction in the early 1900s — not everyone shares Phillips’ perspective. Even after 25 years some landowners, hunters, outfitters and legislators continue to disparage the animal.

The continuing animosity for gray wolves and other wildlife has been deeply troubling for Phillips in his work as a state legislator. Bills he has introduced to protect wandering park wolves and outlaw running over coyotes were rejected by his committee opponents who held the majority.

“I’ve always been intrigued by legislators who proclaim such great faith” in God but treat nature with contempt, said the Bozeman Democrat. “I think their God would hold wildlife in great regard.”

The rejection of such bills became so galling that he no longer prays with the Senate during the Legislature, choosing instead to step into the hall and pray alone.

Phillips said reintroduction of wolves in western Colorado would fulfill the U.S. Fish and Wildlife Service’s goal of recovery by restoring the animals to a significant portion of their range. Without Colorado, he predicted the agency will face lawsuits in trying to claim the species has recovered.

Proctor, of the Defenders of Wildlife, said polls show a majority of Coloradans support wolf reintroduction in the state. He said that’s partly because Yellowstone’s wolves during the past 25 years have provided an example of the species’ effect on other wildlife and habitat, as well as helped to dispel naysayers’ myths.

For example, Proctor said, wolves have not decimated Montana's or Wyoming’s elk herds; although the population of elk did decline substantially in the park.

Wolf watchers have injected an estimated $5 million into the economy of towns near the park and tourism numbers have climbed to new heights in Yellowstone.

Scientific study of wolves in Yellowstone has demonstrated their impact on other species, as well as the natural environment. Wolf kills feed other animals. A reduction in elk may have helped restore some vegetation.

Some ranchers have learned to coexist with wolves through preventative programs coupled with livestock reimbursement programs for documented wolf kills.

“We had all of the fear mongering” when wolves were proposed for reintroduction, Proctor said. “But the reality of what’s happened on the ground has been largely positive.”

The re-establishment of wolves in the Northern Rockies has been as much about politics as biology. Former Wyoming Sen. Alan Simpson supported wolf reintroduction and took a lot of heat from his constituents for doing so, but he thought it was the right thing to do.

“My great grandparents were there wiping them out at the turn of the century,” he said.

Charging into the role to promote wolf reintroduction was Utah congressman Wayne Owens, a Democrat in a politically conservative state.

Owens died in 2002 at age 65, but his legacy and love for wild places and wildlife are still cherished by his family, said his son, Steve Owens, a Salt Lake City attorney.

“I have a button with a wolf on the front with red eyes that light up that says, ‘The eyes have it,’” he said. “He handed them out to members of Congress with a live wolf in a cage outside.”

Wayne Owens became enamored with wolves after taking a week-long course on wolf ecology in Yellowstone in 1986, according to the book “The Return of the Wolf to Yellowstone,” by Thomas McNamee.

In 1987 Owens introduced the first bill calling for the release of wolves in Yellowstone. Although the bill failed, he kept pushing, ending one speech by howling.

In a 1993 Deseret News article, Wayne Owens said he decided to pursue wolf reintroduction after one of his sons questioned why congressmen in the states surrounding Yellowstone could stop the park managers from pursuing the task. Wayne Owens told the newspaper, “There was no answer except, ‘That’s politics.’ And that wasn’t good enough.”

His advocacy for wolf reintroduction could have played a role in his later defeat when running for Senate, yet his support for the animals never wavered.

“We all have a tremendous love and respect for nature and wild things,” Steve Owens said of his family.

Utah, on the other hand, remains largely anti-wolf, a fact that bothers him. He called the authorization of state funds to lobby the federal government to not reintroduce wolves “utterly offensive," a sentiment his father would have shared.

A park scientist said the wolf pack's exposure to humans earlier this year might have played a role in the pups' deaths.

The state of Montana has made more payments to ranchers for livestock killed by predators in 2019 than any previous year.

Wildlife on Rattlesnake Mountain, just west of Cody, Wyoming, were provided with a new watering hole thanks to a cooperative project.

In 2019 Yellowstone National Park continued its steady, although slight, decline in tourism.

High-altitude wolf in Himalayas is unique

The Himalayan wolf is a unique wolf adapted to the harsh life in Asia's high altitudes where low oxygen levels challenge all life forms.

Yellowstone National Park wildlife biologists will broadcast on Facebook Live each Tuesday at 11 a.m. MST in March to commemorate the 25th ann…

Yellowstone wolf biologist to speak in Lovell, Wyoming, on March 19

Doug Smith, senior wildlife biologist at Yellowstone National Park, will speak on March 19 at 6:30 p.m. in the Lovell Visitor Center in Lovell…

Among some people wolves have a reputation of being super killers, able to wipe out wildlife like deer and elk when they move into a territory…

The wolf population in Wyoming has reached about 300 animals, around the same number of wolves wildlife managers aimed to have before hunting was prohibited between 2014 and 2017.

Their riverside picnic quickly turned into a strange encounter. After jumping the log, the wolf paced from side to side, slowly edging closer. “It was almost like he was trying to push by us” to reach the children.

Trump officials end gray wolf protections across most of US

Trump administration officials on Thursday stripped Endangered Species Act protections for gray wolves in most of the U.S. 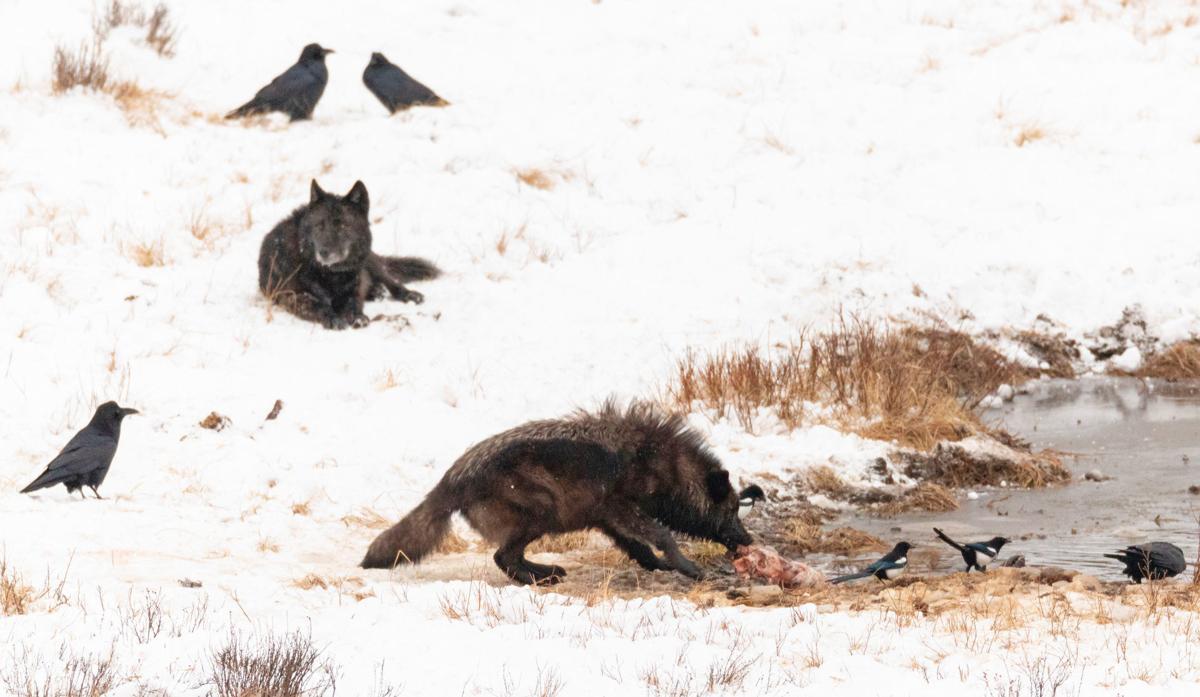 A wolf feeds on a bison carcass at Blacktail Ponds while a pack mate looks on in Yellowstone National Park this winter. 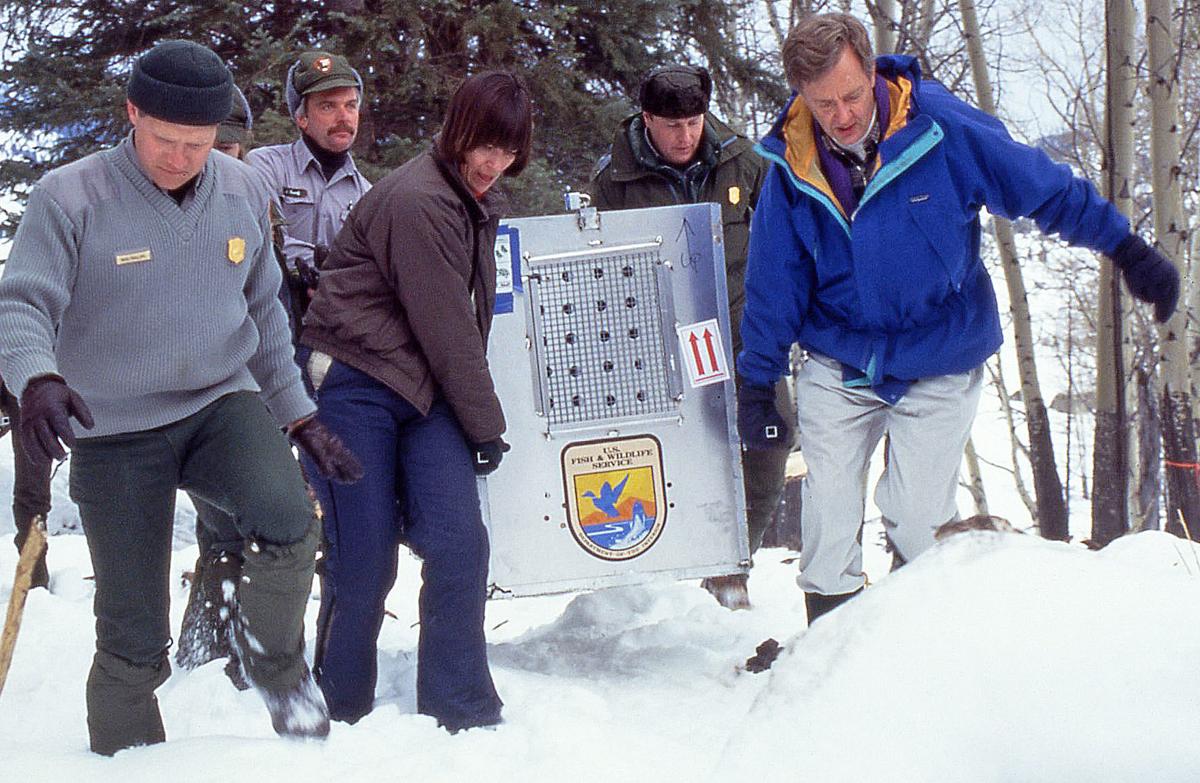 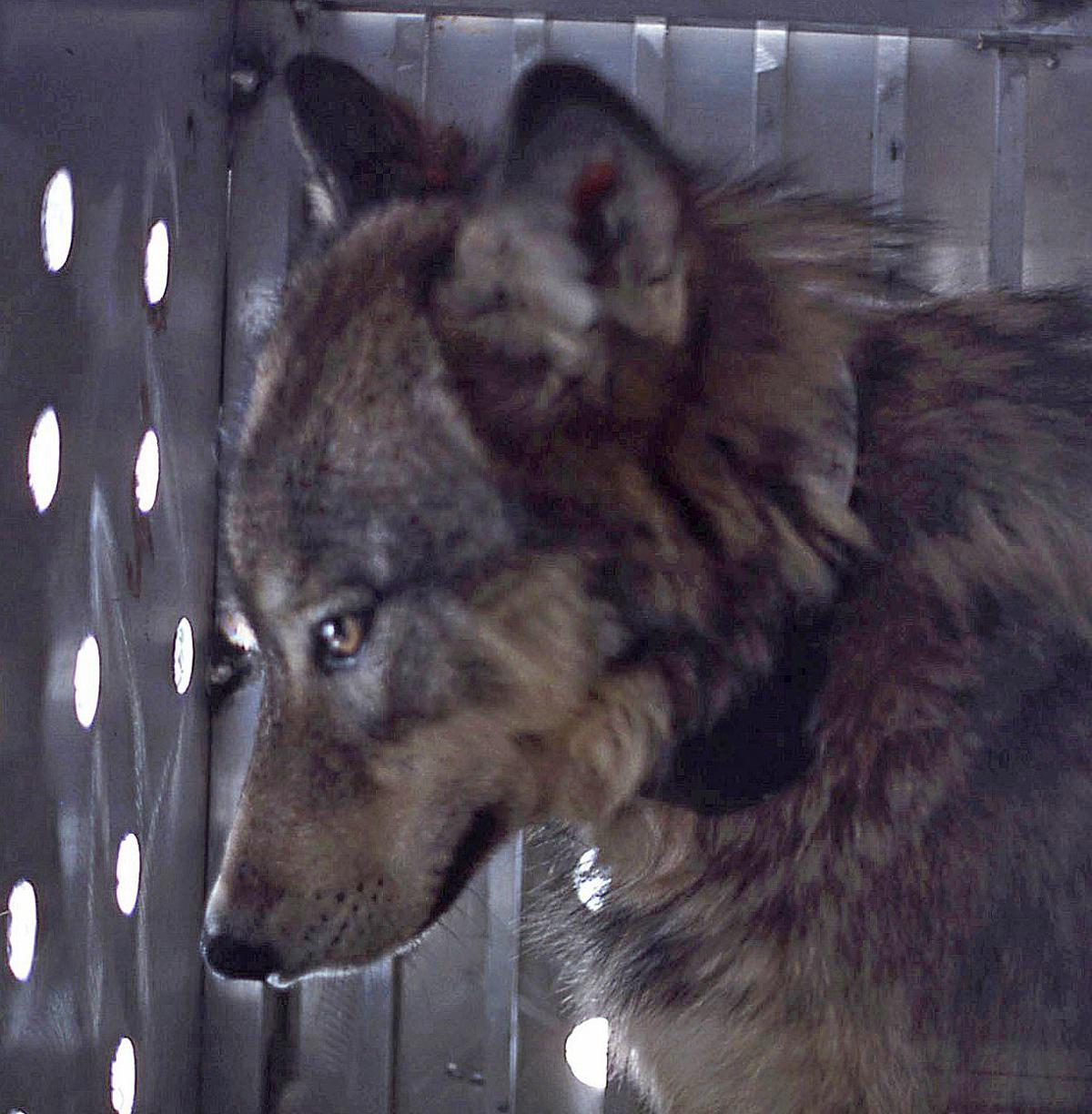 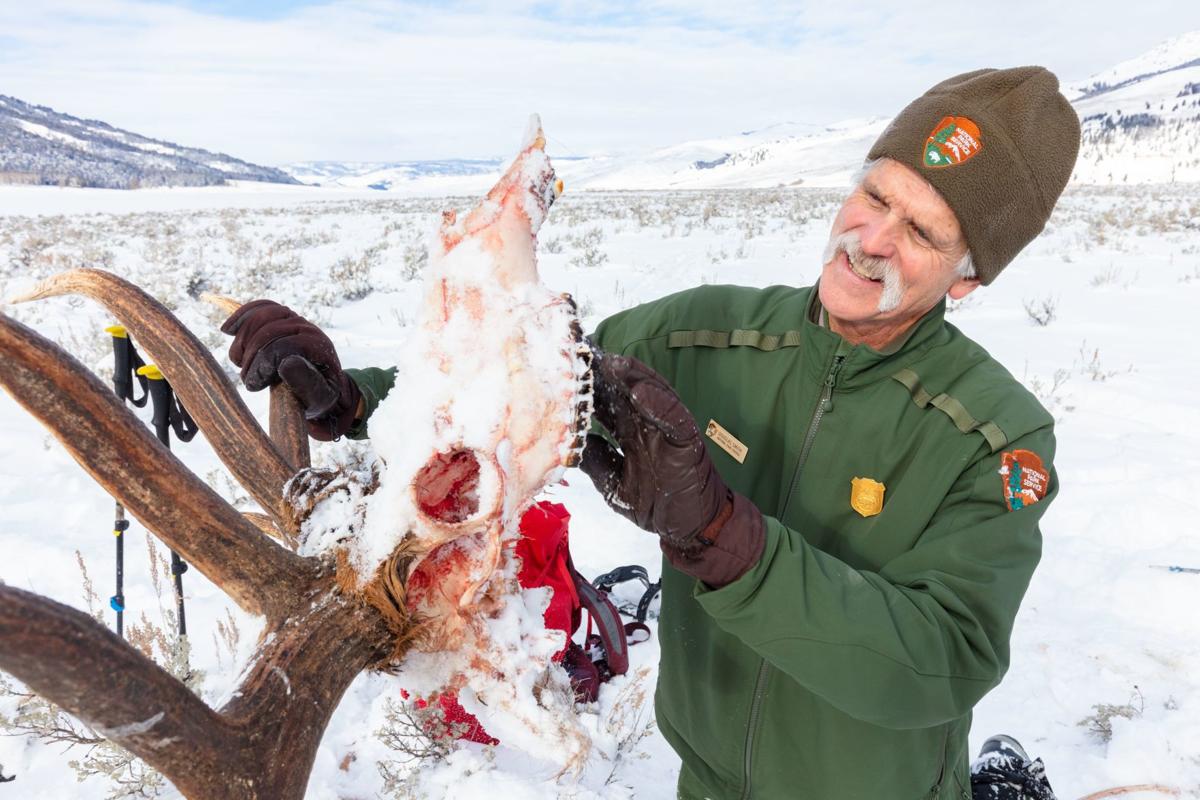 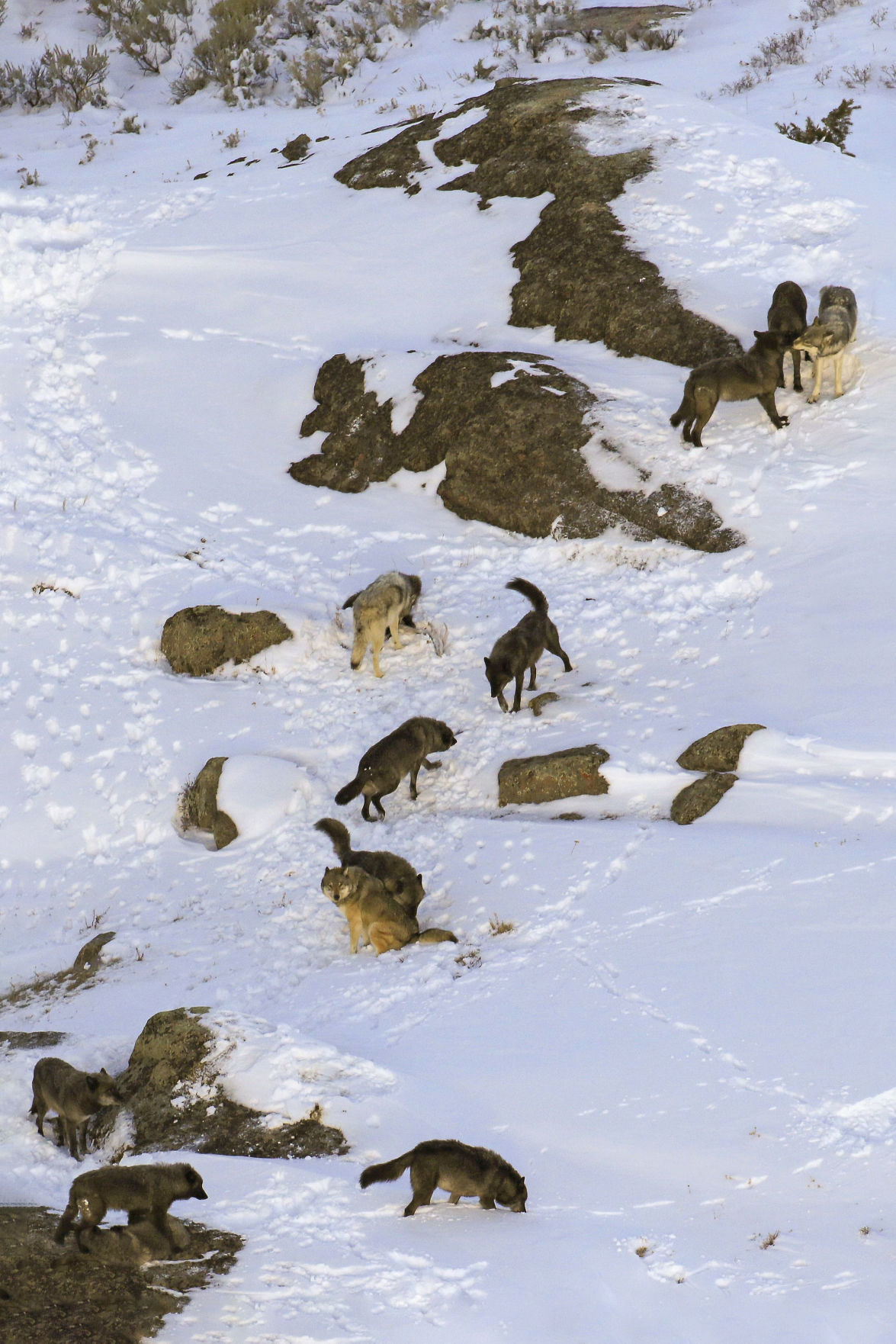 Junction Butte Pack was photographed from a fixed-wing aircraft during wolf studies in Yellowstone.