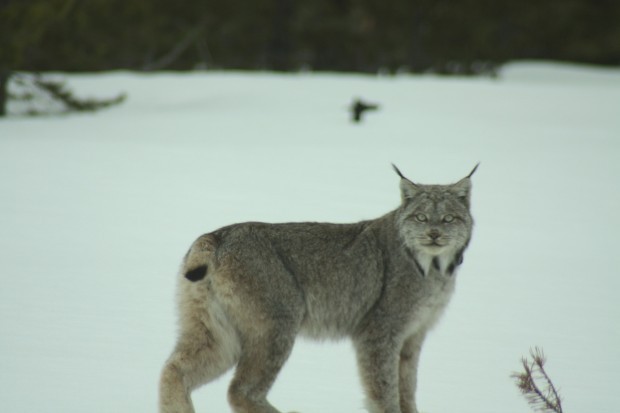 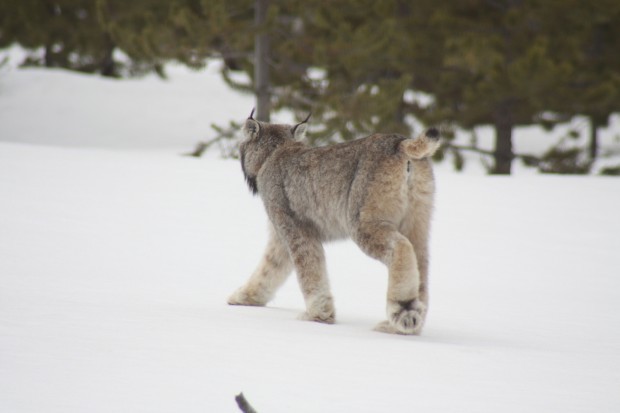 It was simply a trip into one of Larissa Forseth’s favorite places — Yellowstone National Park. But it wound up with a very rare sighting in the park and, better yet, some photos of the encounter.

Judith Forseth, Larissa’s mom, sent this e-mail explaining how it came about:

“We lived in Billings, but moved to the (Yellowstone) river 22 miles south of Livingston so that we could entertain some of our son’s fellow wounded warriors from Walter Reed Hospital when they get R&R,” Judith wrote.

“We were driving our daughter Larissa through YP on Saturday. She recently resigned from NCIS where she was a federal special agent working partly in the Middle East and got tired of dodging the same car bombs that crippled her brother. She returned in January to live in the part of the country where she is happiest, had her camera with the big lens ready, and look what she bagged!!!!!

“We were just slightly south of Indian Creek Campground,” she continued. “The rangers (Kerry Gunther) confirmed it as a lynx, not a bobcat, and are telling us they haven’t had photos like this since the 1970s. This was such a calm animal. She or he didn’t seem all that bothered by us. He turned to look at us several times. What a thrill for us, I tell you!”

Sightings of lynx in Yellowstone are extremely rare and always have been.

The survey results stated, “We traversed track detection transects during winter and used hair snares in summer to detect lynx in select habitats. Using DNA extracted from hair or fecal samples, we confirmed the presence of a female (unknown age), an adult female with a male kitten, and an adult male, each detected in a different year in the eastern portion of the park. Eight other unconfirmed lynx snow trails were also identified, including three from the central portion. Cumulatively, our detections represented at least three individuals, including two kittens born in different years.”

One of the problems with lynx is identification. They can be easily confused with bobcats and can be found in the same types of habitat.

According to the NPS description, “Males can weigh upwards of 30 pounds, while females are smaller. Lynx have large legs and broad, well-furred paws, blunt tails, and prominent tufted ears. Lynx are generally grayish-brown with white, buff, or brown on the facial ruff and throat.”

Montana Fish, Wildlife and Parks' Field Guide states, "At a distance, lynx appear leggier and are grayer in color, with less distinctive spotting (than bobcats). Lynx have much larger feet and longer ear tufts."

Lynx are primarily a forest creature and can handle the deep snows of winter very well. They feed on snowshoe hares, squirrels, grouse, mice and other birds and rodents.

All in all, it was a rare encounter and rarer yet that the Forseth family could come away with photos of the event and memories that few will be able to match.