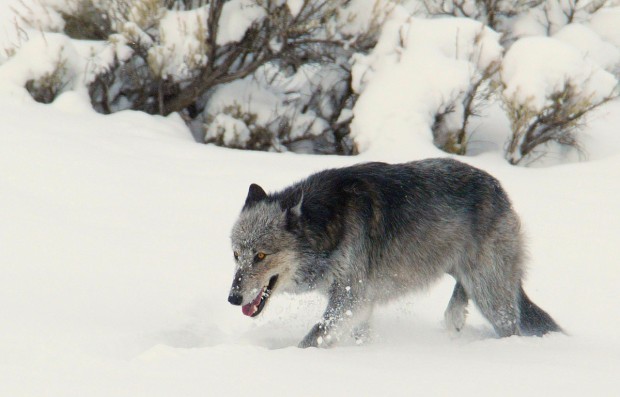 The prevalence of tapeworms in infected wolves studied was very high, according to a study published in the October issue of the Journal of Wildlife Diseases. 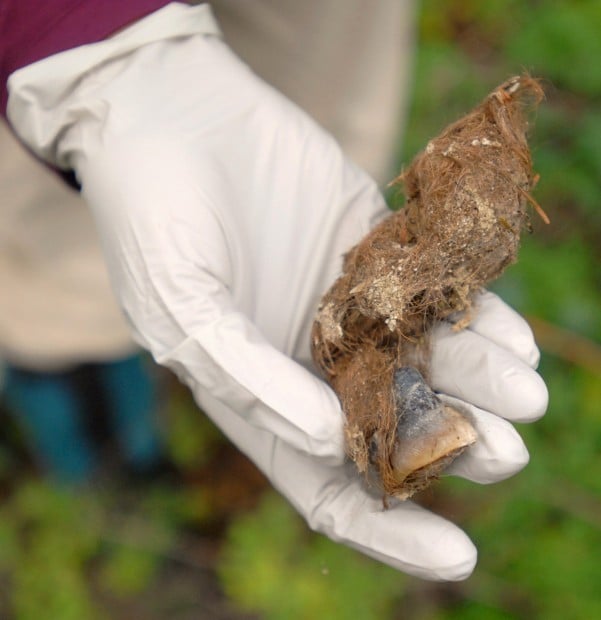 Is wolf poop harmful to human health? A tapeworm newly discovered in wolves in Montana and Idaho poses a threat to humans only if the an infected wolf’s feces are consumed, according to researchers. 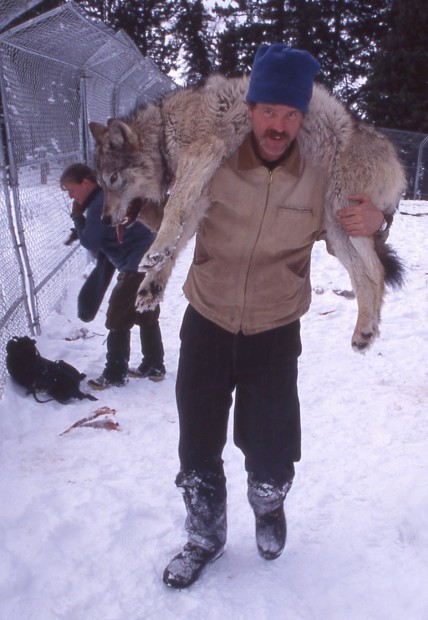 Doug Smith, Yellowstone National Park’s wolf biologist, carries a wolf during the mammal’s transplant to the park in 1995.
BRETT FRENCH Of The Gazette Staff

Tapeworms that hitched a ride south of the Canadian border in gray wolves have stirred speculation about possible transmission to humans and livestock in Montana and Idaho.

A study published in the October issue of the Journal of Wildlife Diseases documented the first instances of the tapeworm Echinococcus granulosus in Montana and Idaho wolves. The study found that more than 60 percent of the 60 wolves tested from Montana and 63 Idaho wolves had the worms.

The fact that wolves contained the tapeworm was not a surprise, according to one of the study’s authors, veterinarian Mark Drew of the Idaho Department of Fish and Game. The tapeworm has long been known to exist in wolves in Canada and Alaska and to take up temporary residence in game animals such as elk, deer, caribou and moose as part of its life cycle.

“It’s been around in the wolf-ungulate system forever,” Drew said.

But how it arrived in Montana and Idaho wolves is uncertain.

Did the tapeworm ride south in wolves roaming over the Canadian border? Or did it arrive when wolves were transplanted into Yellowstone National Park from Canada beginning in 1995?

To avoid just such a scenario, wolves transplanted from Canada to Yellowstone were dewormed, but whether the medicine was 100 percent effective is uncertain, Drew said.

“It makes it lower on the list for likely possibilities,” he said.

“In my opinion it was brought here by the wolves that were transplanted to Yellowstone,” he said.

No matter how they arrived, what surprised Foreyt was the amount of tapeworms found in the 123 wolves studied.

“I was absolutely shocked to see such a high prevalence,” he said. “Some of these wolves had tens of thousands of tapeworms. They were massively infected.”

Such high prevalence increases the possibility that the tapeworm will spread. The eggs of the tapeworms enter the environment through a wolf’s feces. Ungulates can ingest the eggs by feeding on vegetation next to the feces. The tapeworms hatch in the host’s gut, and the embryos search out organs such as the liver and lungs, where they form a golf-ball- to grapefruit-sized cyst. When wolves kill an infected ungulate and eat the cyst, the cycle begins again.

Tapeworms, viruses, bacteria and diseases are common to wildlife, said veterinarian Deborah McCauley, who worked on the study for the Montana Department of Fish, Wildlife and Parks. She doesn’t believe the Echinococcus tapeworm will have any harmful effect on the state’s elk herds.

“In ungulates it doesn’t cause a significant disease,” she said.

Transmission of the tapeworm to humans or livestock is unlikely, Foreyt said.

“It’s primarily a wild-ungulate, wolf or coyote cycle,” he said. “If it would occur in domestic stock I think we would have seen it already.”

For humans to contract the tapeworm, they would have to somehow come into oral contact with a wolf’s feces, Foreyt said. Poking around in dried wolf feces might release the eggs into the air, but he said the person would have to ingest the eggs, not just inhale them, for the tapeworm to take root.

Even if a hunter were to eat an infected elk or deer, Foreyt said the chance of infection is “no problem at all.”

“You could even eat the cyst and it will not infect you,” he said. “You’d have to eat the eggs in the feces. You have to swallow them.”

Incidence of the tapeworm in humans is most prevalent in Inuit people because of their close proximity to wolves and constant interaction with sled dogs, Drew said. There has never been an instance of human echinococcosis, called hydatidosis or hydatid disease, documented in Montana, according to the state Department of Public Health and Human Services.

Wash before you eat

To prevent contamination, Drew suggested that wolf hunters take normal precautions such as wearing latex gloves when dressing the animal and washing their hands before eating or smoking after handling a wolf.

“You don’t have to put on a moon suit,” Drew said. “Reasonable precautions should protect you from Echinococcus as well as other parasites out there.

“The bigger risk would be for the hunter who brings a carcass home and feeds the dog scraps, or the dog that gets into a gut pile,” he added. “That’s a vet bill waiting to happen.”

How many deer, elk, moose or mountain goats may be infected by the tapeworm in Montana or Idaho is uncertain.

“There are more deer and elk infected than people realize,” Drew said, but no study has been done.

The fact that their study was the first to document the tapeworm’s spread to Montana and Idaho excited Foreyt.

“It’s just something we haven’t seen in this area before,” he said. “I assume we’ll see it eventually in Washington and Oregon. Wherever there are wolves there are Echinococcus.”

How good habits can be bad for you

The Montana Department of Fish, Wildlife and Parks has come out with a more detailed informational sheet on the tapeworm carried by some wolve…

Gray wolves killed livestock in Montana at the rate of an animal per day in 2009, stirring a backlash against the predators in rural areas and…

A new tally of gray wolves in the Northern Rockies shows the population held steady across the region in 2009. That ends more than a decade of…

The prevalence of tapeworms in infected wolves studied was very high, according to a study published in the October issue of the Journal of Wildlife Diseases.

Is wolf poop harmful to human health? A tapeworm newly discovered in wolves in Montana and Idaho poses a threat to humans only if the an infected wolf’s feces are consumed, according to researchers.

Doug Smith, Yellowstone National Park’s wolf biologist, carries a wolf during the mammal’s transplant to the park in 1995.
© Copyright 2021 Billings Gazette, 401 N Broadway Billings, MT | Terms of Use | Privacy Policy
Powered by BLOX Content Management System from TownNews.com.
You don't have any notifications.