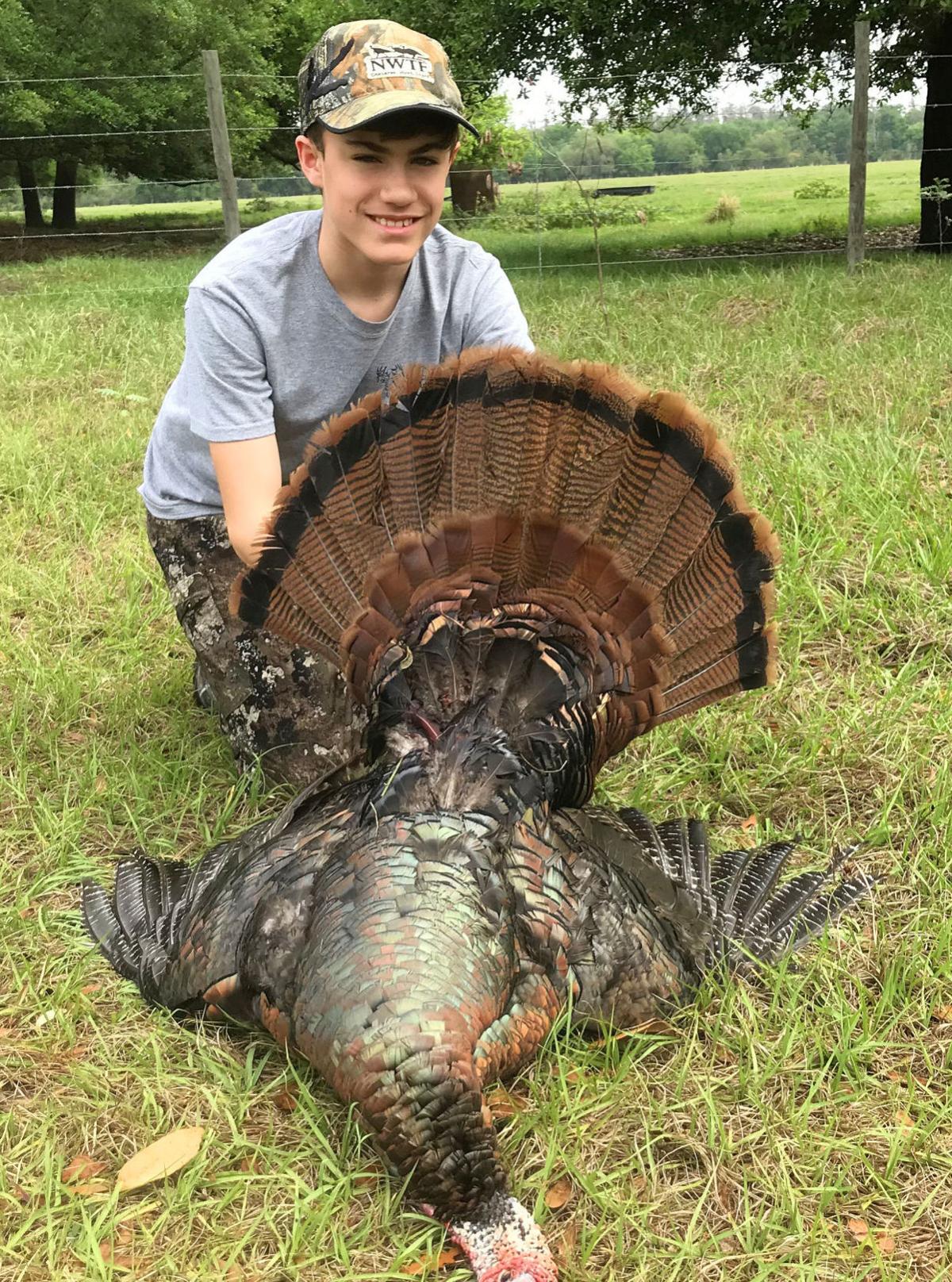 Joey Menuez shot this Osceola turkey in Florida when he was 11 or 12. It's hard for him to pin down his age since his birthday is in April when the spring turkey season is in full swing. 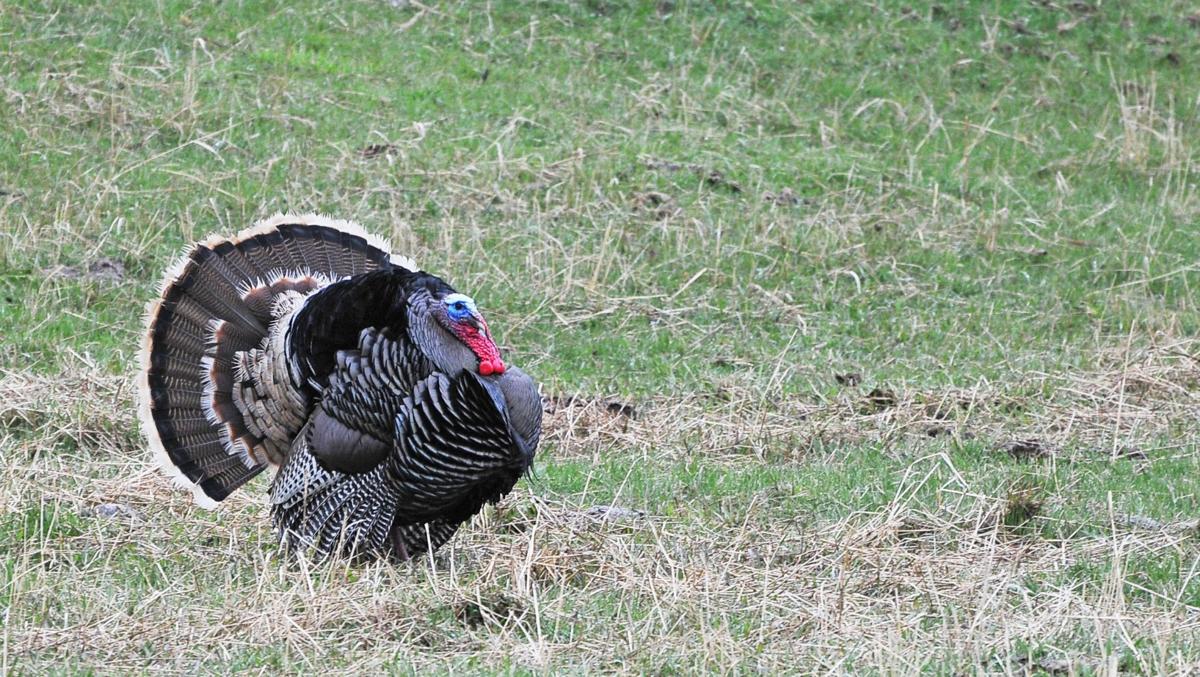 A Merriam's gobbler fans out his tail feathers and puffs up his other feathers to look big and attractive to a female.

Belgrade teenager Joey Menuez accomplished a feat this spring that many hunters twice his age aspire to — a turkey grand slam.

The National Wild Turkey Federation awards grand slam recognition to hunters who bag one each of the four North American subspecies of wild turkey. This includes Merriam’s, Eastern, Rio Grande and Osceola, which is also known as the Florida subspecies. It’s not necessary to shoot all of the birds in a single season to record the feat.

“I loved all of the hunts,” Joey said. “It’s always fun to get out and hunt with my dad and grandpa.”

Joey, now 13, caught the turkey bug from his father, Nate Menuez (pronounced Min u way). Growing up in Ohio, Nate’s opportunities for hunting were limited to whitetail deer and turkeys, unless he wanted to shoot squirrels, he said. For him, hunting has always been a family affair. When he was young, the outings would include his grandfather, father and uncles.

When he moved to Bozeman to attend Montana State University in 1997, Nate found a state where pursuing turkeys was less of a hunting passion. Residents had a variety of other game they could chase, everything from black bears and pronghorns to elk.

“A lot of the more hardcore turkey hunters I know (in Bozeman) are from out of state,” he noted.

Since 1997, though, interest in Montana turkey hunting has steadily grown as populations of the big birds flourished and spread. It’s no longer a necessity to drive to southeastern Montana, the one-time stronghold for turkeys, to fill a tag.

Montana is home to the Merriam’s turkey subspecies, though it is not native to the state. Joey filled that portion of his grand slam while hunting near Columbus when he was 10. His father’s friend in Florida has a ranch where he was able to bag an Osceola turkey when he was 11 or 12. Joey’s birthday is in April, the height of the turkey season, so it’s hard for him to remember exactly how old he was. The Eastern bird was taken during a trip back to Ohio, his father’s old stomping grounds, when he was 7 or 8. The final bird in the grand slam fell this spring while hunting in Utah, near the community of Vernal along the Green River.

The Utah trip stood out as being different for Joey because of the scenery — big cliffs, ravines and gorges.

“We hunted hard,” Nate said of the Utah outing. “The last morning Joey got a good shot on a gobbler.”

All of the hunts were done without a guide.

“Not that there is anything wrong with going on a guided hunt with an outfitter,” Nate said, “but it is certainly tougher on your own.”

Joey was able to tag his first turkey when he was so young because Ohio has more relaxed regulations about youth hunting.

“We always go back and hunt in the home woods,” Nate said

Although the National Wild Turkey Federation doesn’t make any notation on its list for the age of grand slam hunters, the amount of travel involved probably means it’s a small list when it comes to teenagers.

It’s hard to tell who had more fun during Joey’s grand slam adventures, but for sure his father is longing for the day when he can retire and pursue turkeys for six weeks straight each spring, starting in Florida and working his way north back to Montana.

“I love chasing turkeys,” Nate said. “That interaction on a vocal level, kind of like calling elk. It’s so much more enjoyable.”

The only thing that makes the outings more fun is to do it with family.

Joey’s first turkey is mounted in flight. The tail feathers of the other three, fanned out as if in full strut, adorn his wall. Of the four, he said he liked the Osceola for its large spurs the best. Whether he’ll pursue the next royal slam, which requires him to shoot a Gould’s turkey in Mexico, is uncertain.

“I might try,” he said, but until then he’ll keep hunting in Montana and Ohio, his two favorite spots.

There are several ways turkey hunters mark their success besides the grand slam. Here’s the National Wild Turkey Federation’s list of slams.

Royal Slam — The Grand Slam plus the Gould’s (found in Mexico and limited areas of the Southwest).

U.S. Super Slam — Harvest one wild turkey subspecies in every state except Alaska.

Hunters can submit their information to the NWTF to be included on the published lists of people who have completed the slams.

For veteran turkey hunter Nate Menuez, the key to a successful outing is all dependent on scouting.

“The biggest thing is finding birds,” he said. “I don’t care if you’re a world-champion caller.”

Menuez said most turkeys are into routines. Unless they get pushed by a predator or hunter they will return to the same tree to roost and visit the same fields to eat, dust and strut.

“The old birds will do the same thing day after day,” he said.

Menuez likes to get up early, even before the season opens, and listen for birds dropping from their roost trees in the morning. Then he finds a good place to sit and sets up his decoys, which can vary from toms in full strut to hens and jakes, depending on how he feels that day.

“In 35 years I’ve killed more turkeys by staying put,” he said. “You might have to wait three or four hours.”

He emphasized the point about sitting still by noting that a friend hunting in Tennessee was shot in the shoulder by a fellow hunter while pursuing a tom that had flanked him.

To bring in turkeys Menuez’s favorite tool is a slate call. Especially later in the season, after birds have been educated, he avoids using a box call which is more commonly used by other hunters. Once a bird is approaching, he’ll switch to a mouth call to keep his hands free for shooting.

The best advice Menuez can give a new hunter is to be patient.

“You can go in the woods and do everything right and not kill a turkey,” he said. “I’ve got a friend who was a top five turkey caller. He’ll go weeks without killing a bird and he goes out every morning.”

In Montana's turkey woods, it helps to speak the language

The parking area was abandoned when I pulled my pickup next to a patch of state land known to harbor turkeys. It was the same spot Brett Frenc…

Most of us, if we’re lucky, get to see a wild turkey or two in the spring. But Tom Gayvert and his family have lived with a flock for about 10…

Black bear rescued as cub released back into Wyoming woods

Sometime after losing his mom from an unknown cause, the cub wound up getting by in the neighborhoods south of Jackson.

Joey Menuez shot this Osceola turkey in Florida when he was 11 or 12. It's hard for him to pin down his age since his birthday is in April when the spring turkey season is in full swing.

A Merriam's gobbler fans out his tail feathers and puffs up his other feathers to look big and attractive to a female. 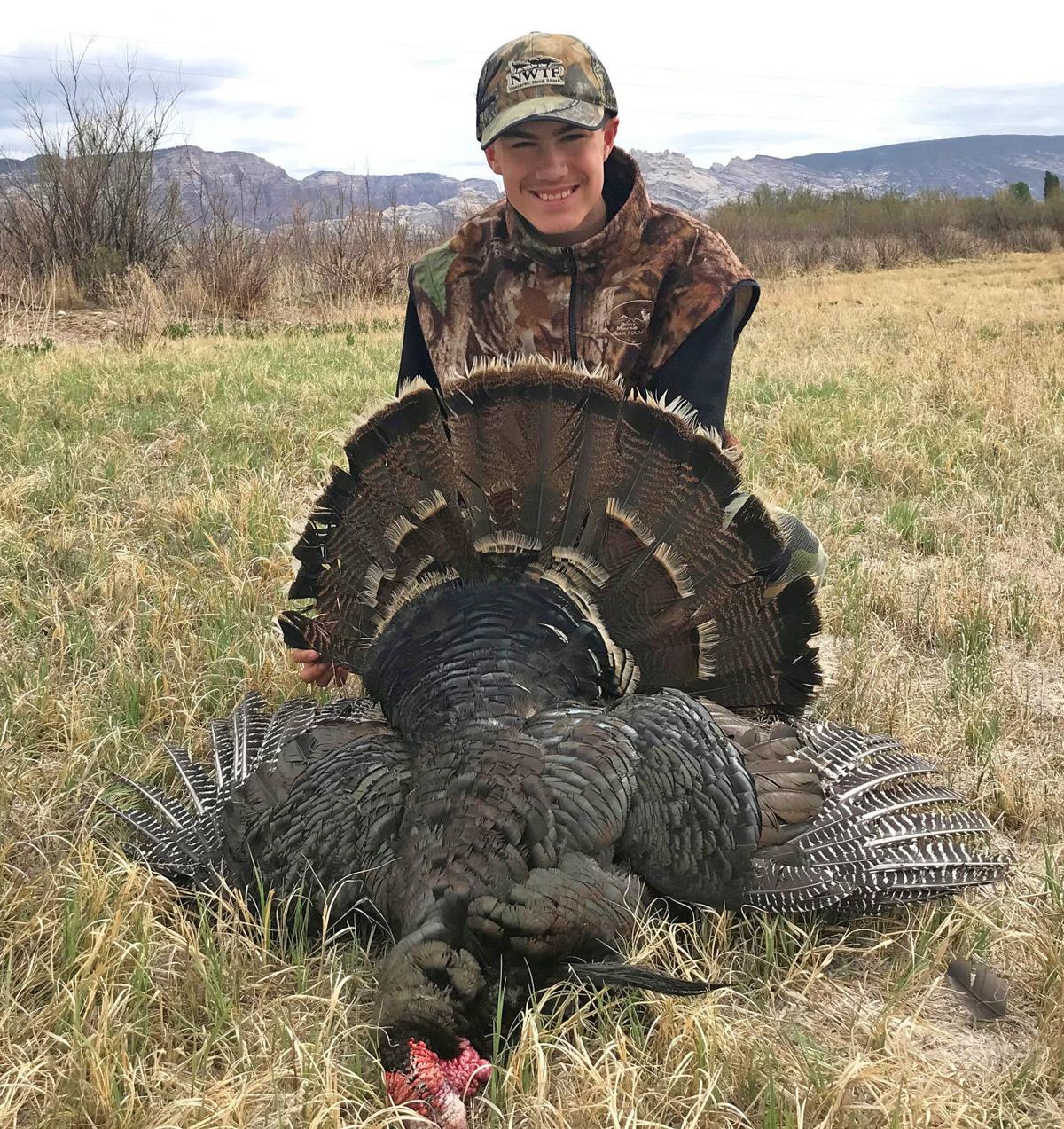 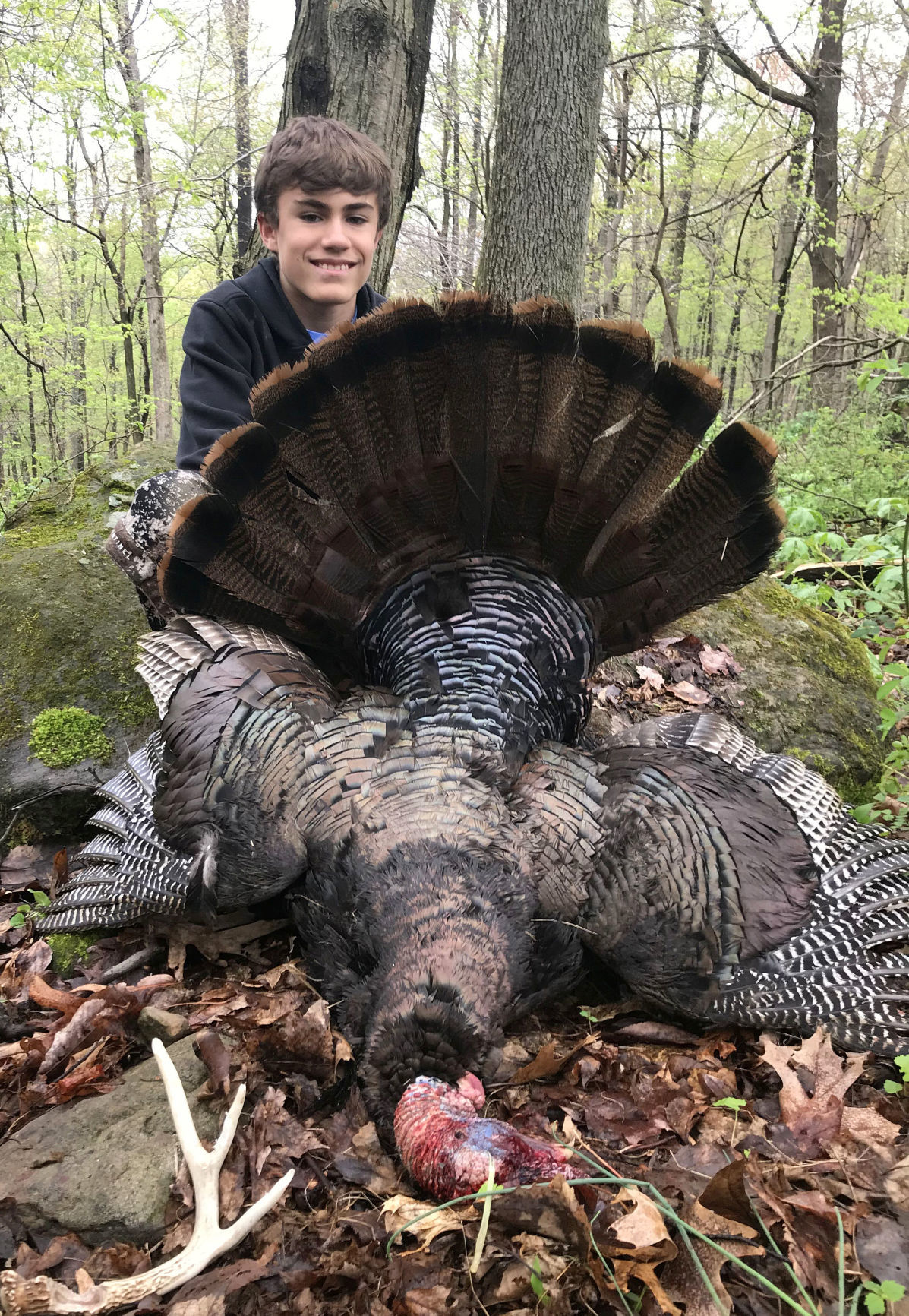 Joey Menuez shot his first turkey, an Eastern subspecies, when he was only 7 or 8. His father, Nate, grew up in Ohio where they visit to turkey hunt the eastern birds. 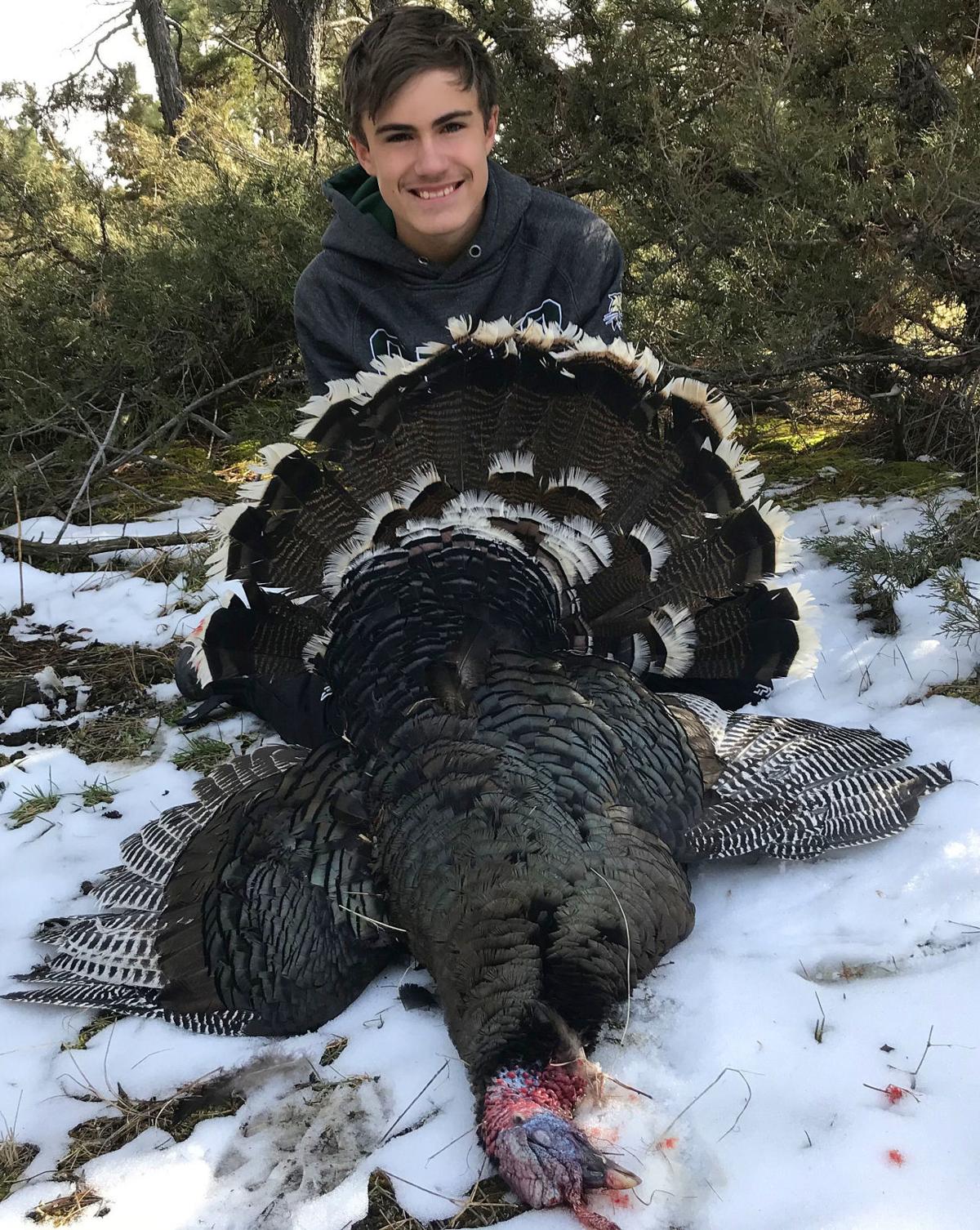 Merriam's turkeys, like this one that Joey Menuez shot, were transplanted to Montana and now are found across the state.