An order allowing some electric bicycle use on trails — along with negative public reaction to the rule — has prompted the Billings Field Office of the BLM to take a closer look at some Pryor Mountain trails.

“It’s commendable the BLM is making a step in the right direction,” said Aubrey Bertram of the Montana Wilderness Association. “It is pretty powerful to see the effect of public comment … when people take part in these public processes.”

Dave Lefevre, Billings Field Office manager, led a tour of one route — the Pygmy Panther Trail along the edge of Bear Canyon — on Tuesday. Recreation, biology and range specialists accompanied him as they hiked the 3-mile route to examine the trail surface, its location and whether it would be suitable for mountain bikes and e-bikes. Other considerations included signage or cairns to mark the route and whether and how much trail work would be necessary to improve the path.

“We’ll make a more specific proposal for trails before we make a decision,” he said.

The field office was caught off-guard in December when the Montana Wilderness Association urged its members to comment on BLM’s environmental assessment for the Pryors. The EA included the new U.S. Department of Interior order allowing some electric bicycles on trails where mountain bikers could ride. The BLM had not publicly announced the EA via a news release. Instead, Lefevre said at the time that posting the document on the agency’s online planning site was notification enough.

The MWA noticed the document, denounced the agency for its lack of public notification and put out a call to members for their observations. As a result, the 130 comments the BLM received were somewhat one-sided, Lefevre said.

“A high percentage had to do with nonmotorized trails,” he said.

“Most of the comments we got were on social impacts,” said Jenny Alexander, BLM outdoor recreation planner.

In the wake of such criticism the BLM decided to extend the comment period on the EA to Jan. 6.

The hubbub revolved around an order given in August by Secretary of the Interior David Bernhardt that would allow low-power, pedal-assisted e-bikes on all trails where traditional bikes are allowed on Interior Department lands. The Interior Department oversees the BLM and National Park Service, among other federal agencies.

“We were purposely vague about how that order would be implemented,” Lefevre said. “We still have discretion to look at that.”

“It would be great for this field office to have a discussion about e-bikes as a form of motorized recreation … and what those impacts would look like,” Bertram said, with emphasis on subjects like erosion, effects on wildlife and the transport of weeds.

Many of the trails on BLM land in the Pryor Mountains are old roads that lead to now-abandoned uranium mining claims. Even though they may be 70 years old or older, the roads have not overgrown because they are still used by motorized recreationists. The trails also remain evident because of the Pryors' arid climate, nutrient-deficient clay soils and rocky substrate.

The BLM has been working to sign routes and close others to provide loop rides or connections to roads and trails rather than dead-ends.

“It would be nice to make it into a logical trail system,” Lefevre said. “Right now there are a lot of trails you can go ride on, you’re just not sure where you’re going to come out.”

So BLM’s staff has been reviewing the nonmotorized trails in the Pryor Mountains this winter. As part of the review the agency will cooperate with the Beartooth Ranger District to make sure trails that start on BLM land — which runs along the lower elevations of the mountain range — don’t dead-end at the Custer Gallatin National Forest boundary.

Allowing bicycles with motors of less than 750 watts, and only those that add electric power assistance when pedaled (as opposed to a motor that powers the bike without pedaling), has worried some recreationists that the door is being opened to other motorized vehicles in the future, Lefevre said. He added that there’s also people concerned that less experienced cyclists on e-bikes may pedal farther, putting themselves at risk.

“One of the things we’re speculating is that there will be more people riding bikes because of these,” he added.

Bertram said the Montana Wilderness Association isn’t against mountain biking, but sees the e-bikes as a way for recreationists to travel farther faster, and therefore deeper into wildlife habitat. The bikes are also heavier, meaning their wear and tear on trails would be greater than standard pedal bikes and therefore contribute to more erosion.

The BLM is also considering conflicts between trail users: cyclists and hikers; horseback riders and cyclists; mountain bikers and e-bikers. Is construction necessary to make the trails more visible and durable? Would vegetation need to be cut or trimmed to improve sight lines to avoid crashes between users? Should some trails be one-way to prevent collisions? How much marking of the routes is necessary?

One of the biggest unknowns is: If BLM marks and improves trails, will that increase use and therefore conflicts? If you build it, will they come?

“We also have to think about what the future is going to be,” Alexander said. “Acton (Recreation Area) used to be pretty quiet” but has now turned into a popular downhill mountain biking spot north of Billings since trails were built.

In a discussion among the BLM staff following the Tuesday hike the short Pygmy Panther Trail seemed an unlikely mountain bike route because of its length.

“It’s not even on a mountain biker’s radar at that distance, unless it could link up to something else,” said John Reffit, BLM manager of Pompeys Pillar.

Six to 12 miles is closer to the distance that cyclists are looking for, he added. Yet Pygmy Panther ties into the Bear Canyon Road, which climbs up the face of the Pryor Mountains and onto Forest Service land.

The Pryors are unique in that the lower elevation BLM property is a high desert landscape populated by scattered sagebrush, juniper and cactus. The sparse vegetation clings to rocky outcrops and lines the bottom of steep-walled canyons dotted with caves. Yet by driving or hiking uphill a thousand feet the environment gradually changes into an alpine setting with fir trees, lush meadows and high peaks.

Views from the foothills and mountains are expansive, stretching across the valley of the Clarks Fork of the Yellowstone River to the snow-packed summits of the Beartooth Mountains to the west and south into Wyoming’s Bighorn Basin and the hazy distant peaks of the Absaroka Range.

Taken altogether it’s easy to see why the diversity of the Pryor Mountains is so attractive.

“People are coming out here for the solitude and to get away from the crowds,” Alexander said.

An injured coyote bit a 43-year-old woman cross-country skiing near the Grand Canyon of the Yellowstone on Tuesday morning, according to a Yellowstone National Park press release. 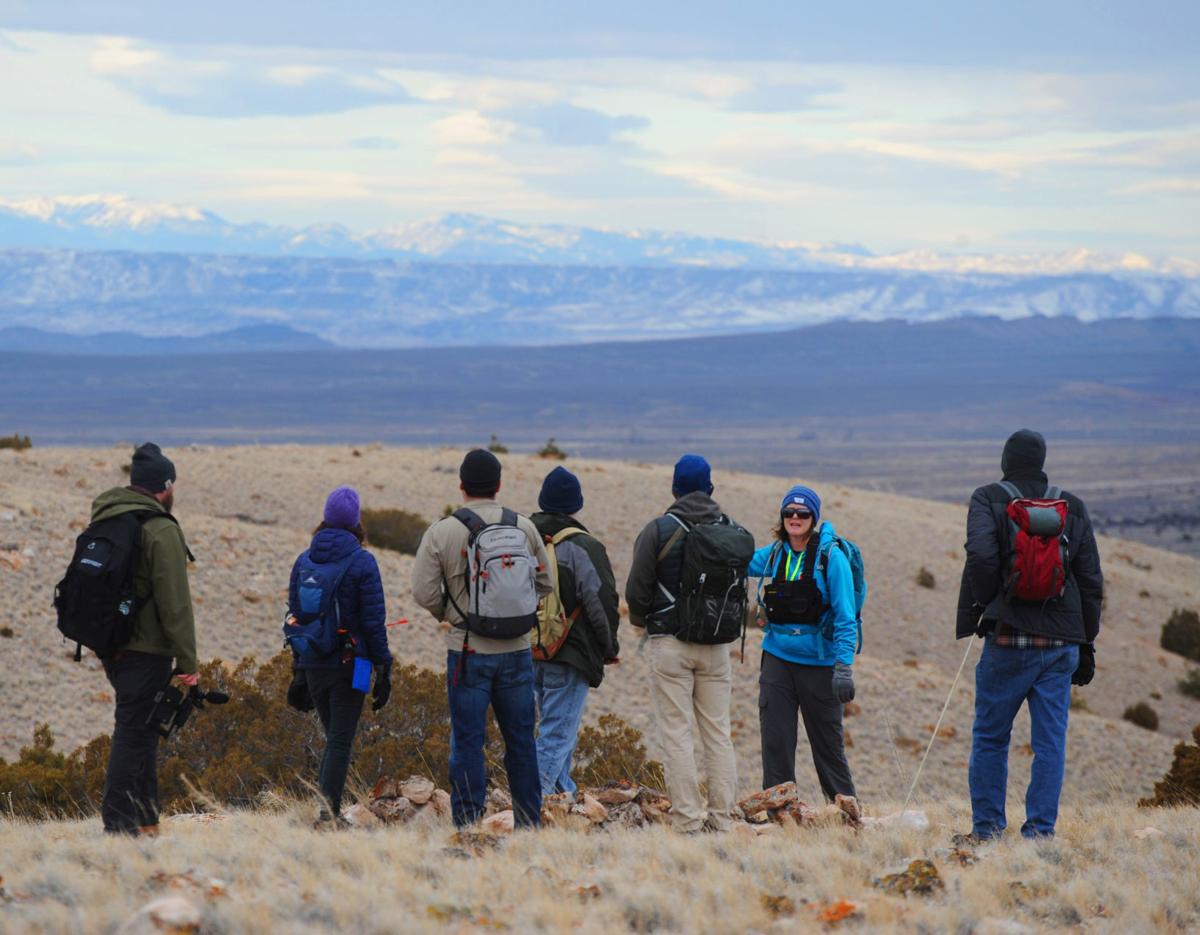 BLM outdoor recreation planner Jenny Alexander, second from right, pauses to talk to her coworkers about the Pygmy Panther Trail in the Pryor Mountains during a field tour on Tuesday. The agency is examining trails following an order allowing some electric bikes to be used on the same trails where mountain bikes are allowed. 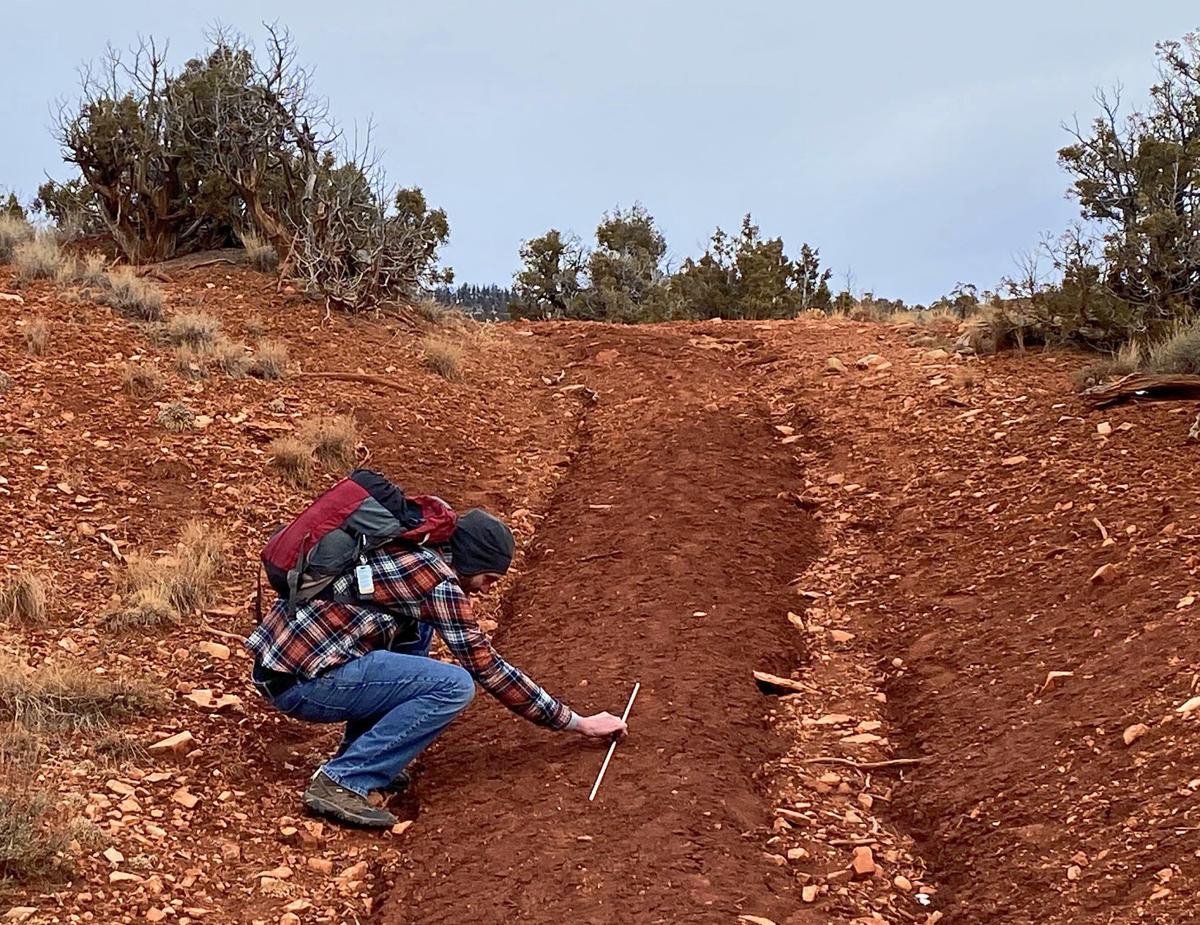 John Reffit, of the BLM, checks the slope on a now-closed portion of old road that has eroded on the slope of Bear Canyon in the Pryor Mountains. The clay soils are fine and easily transported. 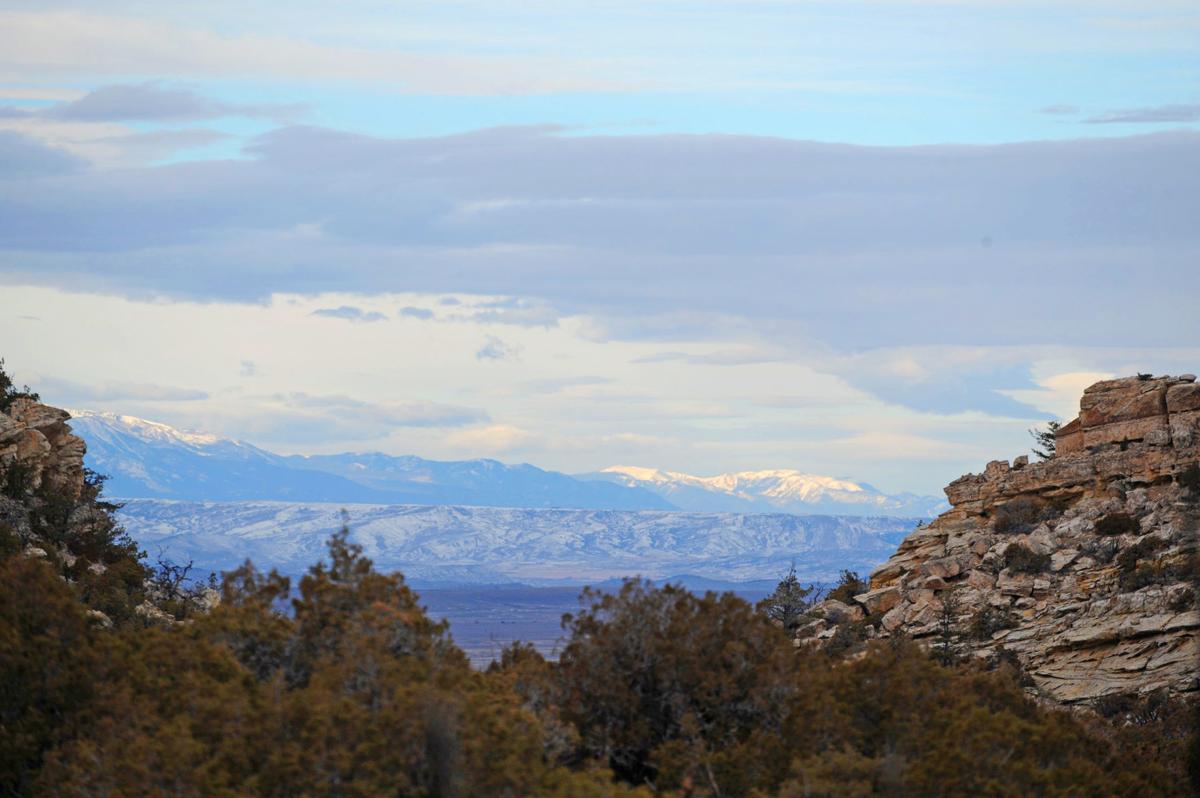 The Beartooth Mountains are framed by rocky cliffs in Bear Canyon. Views of the Beartooths and surrounding country is one of the benefits of recreating in the Pryor Mountains. 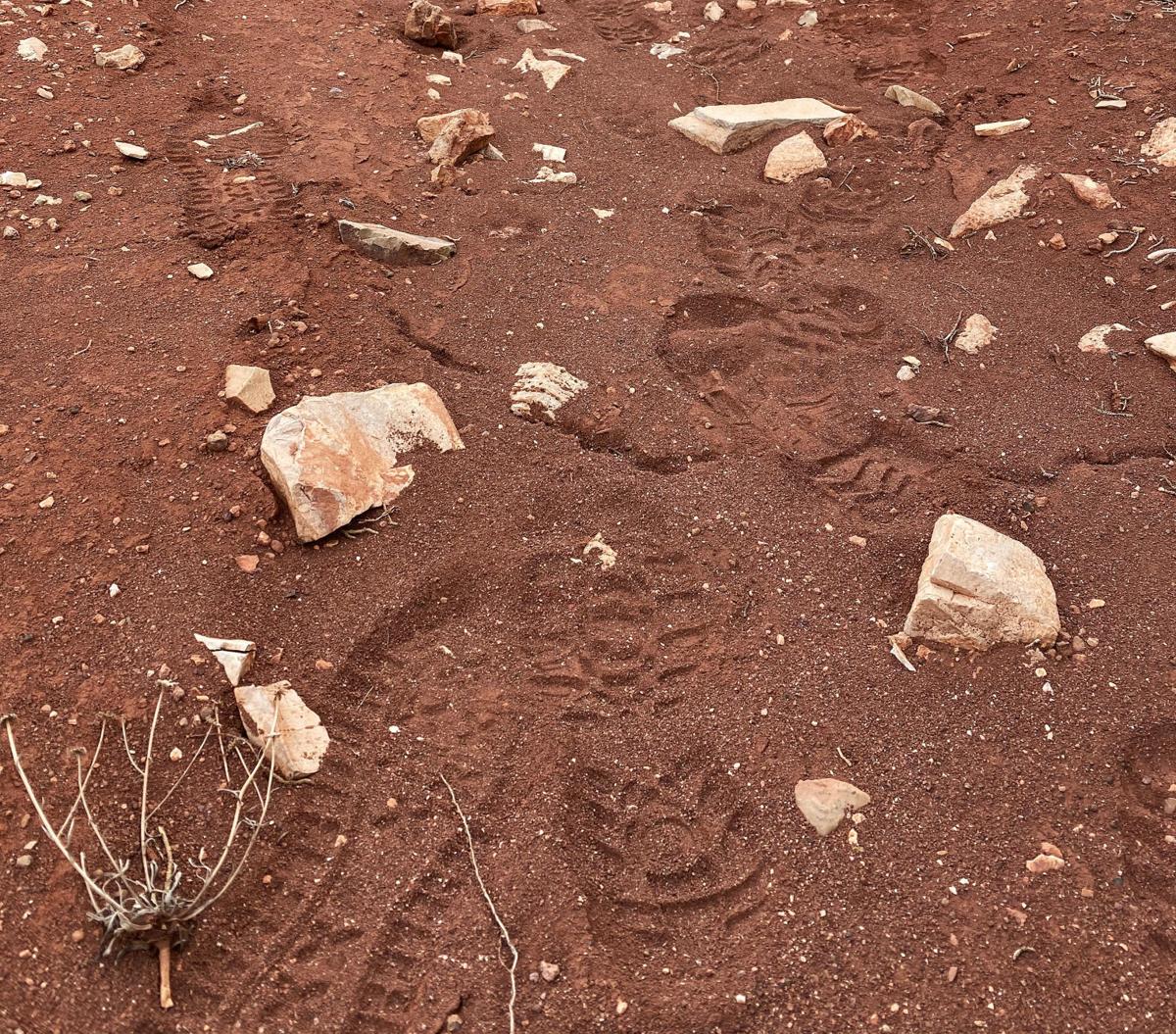 Hikers' tracks mark the clay soils on a portion of the Pygmy Panther Trail, which was named by a Montana Conservation Corps group that worked on the route. 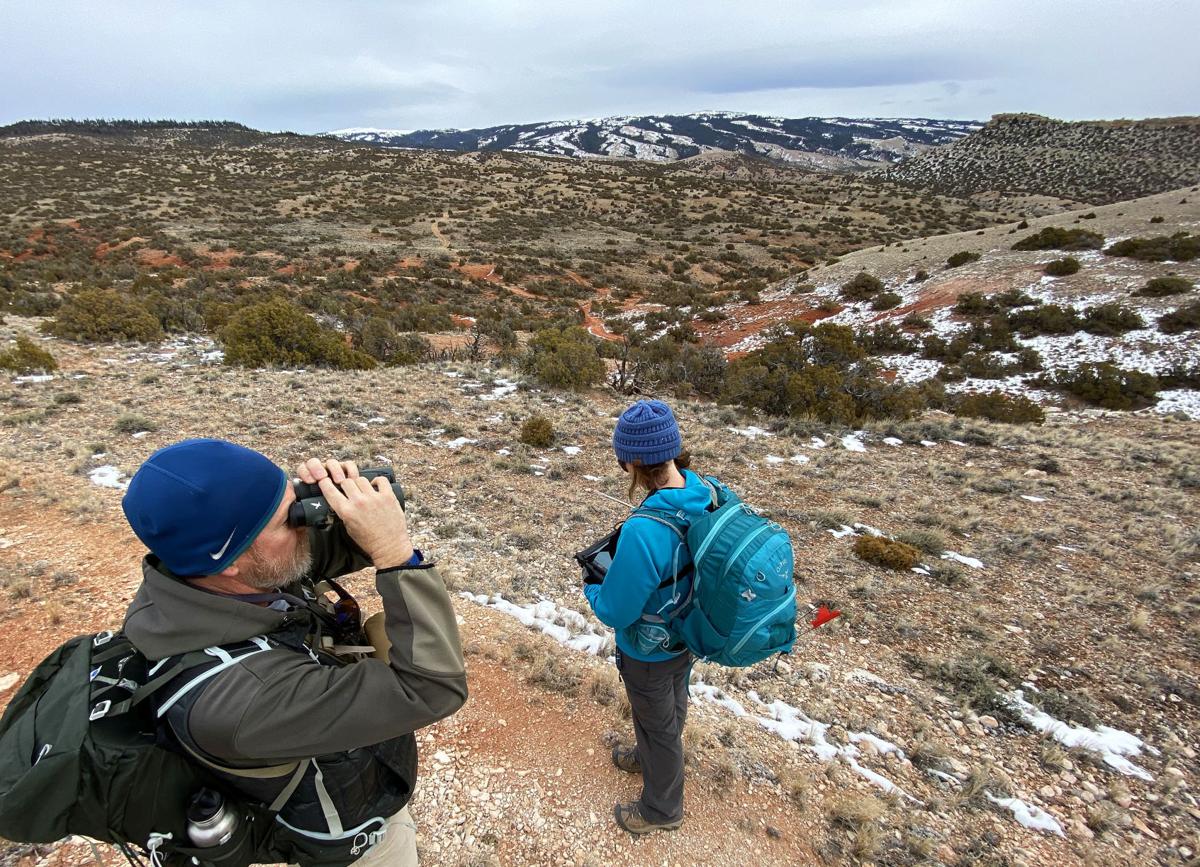 The lower elevations of the Pryor Mountains are a desert-like landscape. Above, BLM wildlife biologist Paul Morey scans the area for animals while Jenny Alexander checks a map where the trail splits.