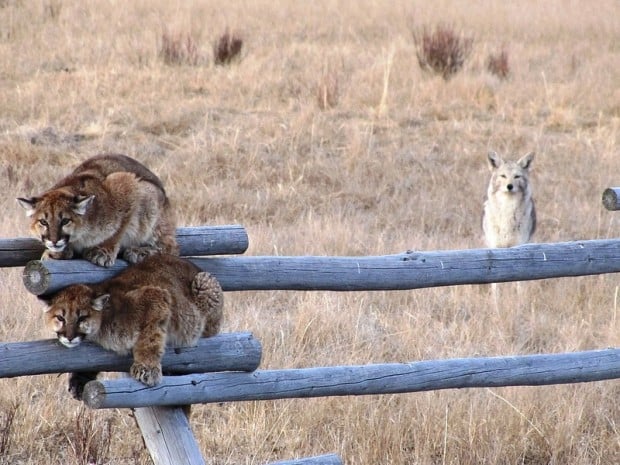 Two young mountain lions huddle atop a tall buck and rail fence on the National Elk Refuge to avoid a pack of five coyotes that pursued them. 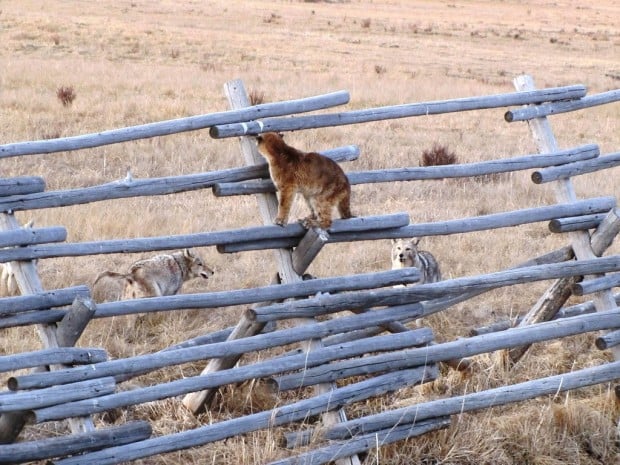 One of the cougar cubs watches as coyotes circle below the high buck and rail fence on the National Elk Refuge in Wyoming.

Lori Iverson has a new appreciation of what the phrase “going viral” means.

On the morning of March 29, the outdoor recreation planner for the National Elk Refuge in Wyoming posted seven photos on the U.S. Fish and Wildlife Service’s flickr site – a website to share photographs. The photos showed two young mountain lion cubs stuck atop a tall wooden buck and rail fence with a group of five coyotes, ears perked, watching and circling menacingly below.

Iverson had captured the photos the night before on the refuge, just before sunset. Within 72 hours after they were posted on the flickr site, the images had collected 2.6 million views. Yahoo, NBC and Fox picked up the photos, too, so she has no idea how many other people have viewed the shots.

Iverson had gotten a tip eight days earlier that there were two juvenile cougars on the refuge. They had been seen dining on an elk carcass by a fellow Fish and Wildlife Service employee. She asked the employee to give her a heads-up if the cougars were seen again.

Eight days later, she got a call at about 6:30 p.m. that the young lions had been seen atop the fence.

“I pretty much dropped everything and went right away,” she said.

Within 20 minutes, after stopping at the office to pick up her Canon PowerShot camera, she was at the site and snapping photos.

“I didn’t immediately see the coyotes,” she said. “I saw the cats on the fence.”

The photos show the cats atop the large wooden fence where it crosses a small stream. The two are huddled together on the top two rails.

Sheltered from view, Iverson was able to get reasonably close to take the shots. The cats seemed fairly relaxed until the coyotes moved closer.

“As the coyotes moved in, I could see the cubs’ ears flatten,” she said.

Her photos show the coyotes running in and the cougars’ body language changing as they flatten themselves closer to the rails as if to hold on, hide or in preparation to jump down. The coyotes closed to within a few feet of one of the cubs, which clung to the opposite side of the fence moving to a vertical position to keep a better eye on the canines. The cubs were on the same side of the fence as Iverson, the coyotes were on the opposite side.

Iverson could only speculate as to the reason for the standoff. The coyotes could have been staking a territorial claim to a carcass the cubs were feeding on. As to why there were so many, she noted that the refuge is a scavenger-rich environment in the winter, supporting everything from coyotes to ravens, eagles and lions that congregate around the refuge’s elk in hopes of dining on winterkill carcasses.

Iverson said she had no idea whether the photos would turn out. She said she probably missed many shots because she was so awestruck watching the drama unfold that she would stop photographing to simply observe.

“It was really exciting to witness something like that, to see the interaction between wildlife,” she said.

The cubs have been estimated to be about 5 to 6 months old. In some of the photos, you can see dark spots on their fur. The spots help camouflage the animals from predators when they are young and defenseless. Although it varies by animal, they typically begin losing their spots by about 6 months old and weigh in the range of 30 to 40 pounds. But spots can still be present at 8 months. The kittens are often weaned off their mother’s milk when they are 2 to 3 months old.

Where the cubs’ mother was located is unknown. Even when the cubs are young, the mothers must continue to hunt to eat. When the kittens are 7 to 8 weeks old, she’ll begin bringing home meat to feed them. Mother lions are known to leave their cubs at a kill site as they search for the next meal. Sometimes she may be gone for days. Young cougars may stay with their mother for a year to a year and a half before venturing off on their own.

Iverson said she is being discreet about the location of the cubs to discourage other photographers. The cubs were photographed in a part of the refuge that is closed to the public. She worries that attention drawn to the animals may encourage trespassers.

Since the photos were also posted on the U.S. Fish and Wildlife Service Facebook page, Iverson said she and the Service’s regional Facebook coordinator put together a general reply to the queries -- there was no way she could answer them all individually. The comments included questions about why Iverson didn’t intervene to protect the cubs and why there were so many coyotes.

The sudden social media celebrity has been a lesson for Iverson, as well as an opportunity to educate the public. She’s hoping something positive comes out of the incident.

“I have one secret wish. We do frequently post photos to our flickr site,” she said. “Please visit it and come back often.”

Thank you once again to everyone who has shown an interest in this story. We attempted to answer all of your questions one at a time this weekend, but the sheer volume overwhelmed our small staff, so here’s the latest information we have:

Location: The photos were shot on the National Elk Refuge in a closed area of the refuge, away from public viewing areas. Having these young mountain lions become habituated to humans would put the cubs’ safety in jeopardy, so for those of you planning a visit to the refuge, please respect area closures and limit your enjoyment of watching the cubs to the photos we've shared on our flickr account (http://www.flickr.com/photos/usfwsmtnprairie/sets/72157633115008883/with/8600002901/).

Mother lion: The status of the mother is unclear. The juvenile cougars have been spotted several times, but they were never with an adult.

This does not automatically mean they are orphaned. It is not uncommon for a female mountain lion to leave her cubs during the day and return to them at night.

Black Lab Predation: It is also only speculation that this is the same family group that was involved in a recent local incident with a black lab. Mountain lions can have very large home ranges, and without any of the animals collared, there is no way to know their current location or where they have traveled in recent weeks.

Health: The two juveniles appear to be in good condition, based on eyewitness accounts and the photos we shared.

Reason for the Standoff: While we may never know the reason the coyotes threatened the cubs, the likely explanation is that they are simply staking their claim to territory, as the two species are rival predators, competing for similar food sources.

Coyote Density: The refuge is home to a number of scavengers (ravens, magpies, coyotes, bald eagles, etc.) and their numbers tend to ebb and flow with the seasons. In the winter more elk are present and thus more feeding opportunities exist, so scavenger numbers significantly increase during the winter. We have not confirmed the presence of a coyote den in the area, as some have speculated.

Updates: We and our partners are tracking the situation and will post updates here, if and when we learn more. However, given the fact that the cubs are not wearing tracking collars and that mountain lions are very elusive creatures, we don't know when that may be. In the meantime, we can look back at the memory of having a rare glimpse into the life of young animals in their natural setting.

JACKSON — Any bison and elk remaining on the National Elk Refuge in Jackson Hole will be driven off to preserve forage for next winter.

Two young mountain lions huddle atop a tall buck and rail fence on the National Elk Refuge to avoid a pack of five coyotes that pursued them.

One of the cougar cubs watches as coyotes circle below the high buck and rail fence on the National Elk Refuge in Wyoming.