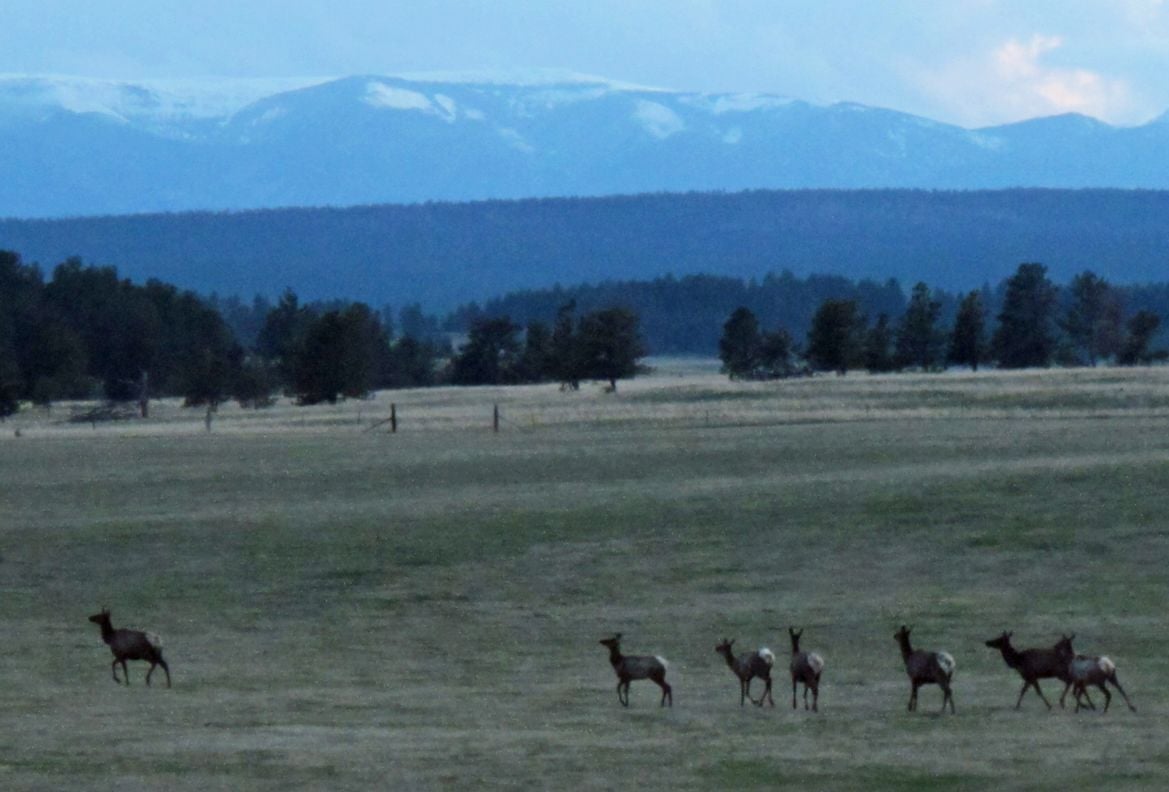 Elk trot across a pasture on the N Bar Ranch with the Big Snowy Mountains rising in the distance. The owners of the ranch, Dan and Farris Wilks, have floated a proposal that could open up 16,000 acres of the ranch to public hunting. 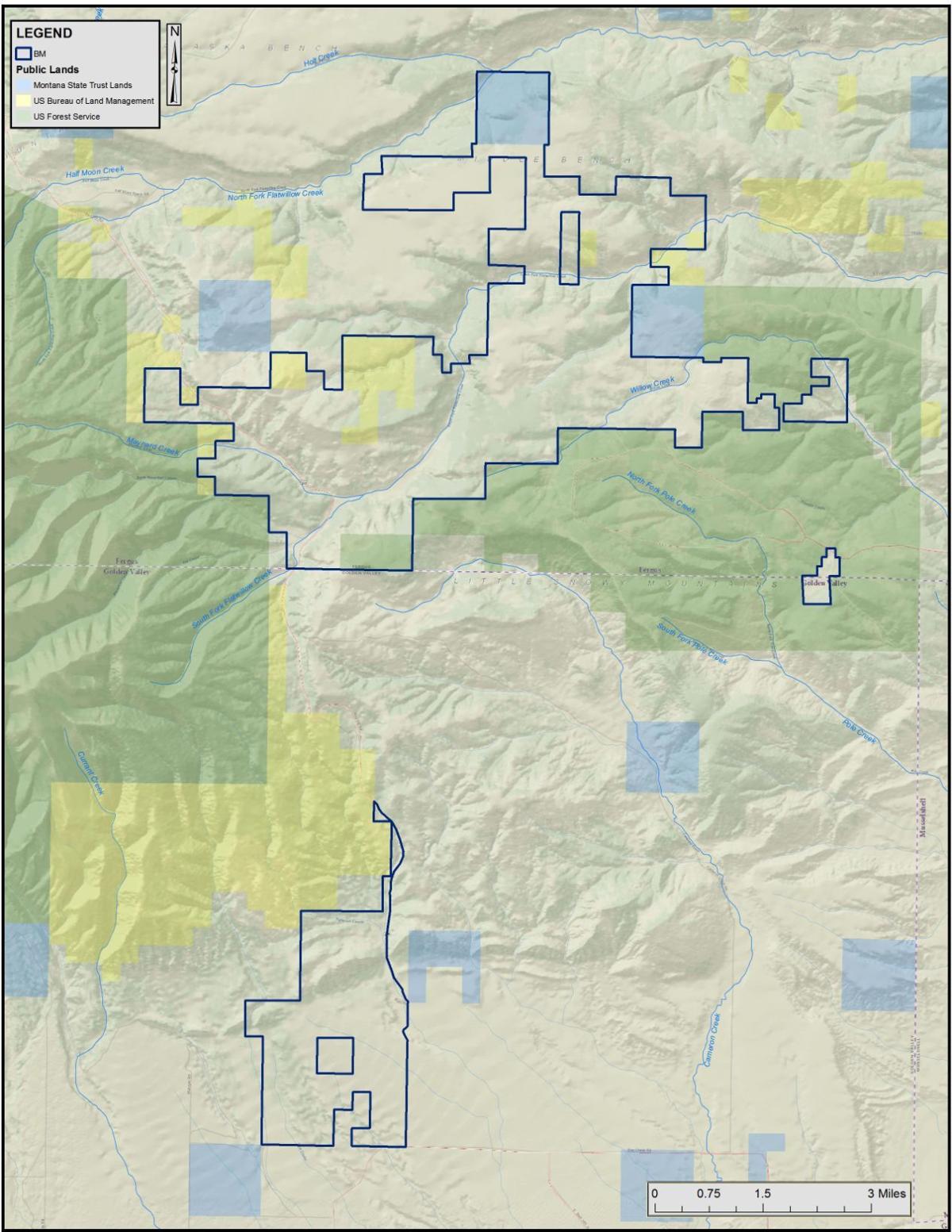 This map outlines lands owned by Dan and Farris Wilks that they are saying could be opened to public hunting in Fergus and Golden Valley counties.

Although nothing has been agreed to yet, the state’s largest private landowners are telling Montanans they are considering opening up 16,000 acres of their land in Fergus and Golden Valley counties to public hunting.

Darryl James, a spokesman for brothers Dan and Farris Wilks, said the proposal is meant to “assuage the fears of Montana sportsmen” as well as to “help manage a clearly over objective elk population.” He said in discussions with Montana Fish, Wildlife and Parks officials a limit of 30 to 40 hunters a week is initially being considered under a managed hunt.

A map James showed to a gathering in Billings last week outlined property that is located on the western portion of the Wilkses’ N Bar Ranch as well as the Janet Lewis Ranch in Golden Valley County, located along Red Hill Road. The largest chunk would extend from Red Hill Road east along the South Fork of Flatwillow Creek and Maynard Creek and tie together Forest Service, Bureau of Land Management and state School Trust lands. The Lewis Ranch abuts BLM land to the north.

Whether the land would be enrolled in the state’s Block Management Program, which pays landowners to provide public access, is not certain. But James said, “The Wilkses understand the value of cooperating with Fish, Wildlife and Parks.”

Although no specifics were mentioned previously, James had touted the possibility of access to the N Bar months ago as the Wilkses have proposed discussions with the BLM about a possible land trade. The Wilkses are seeking 4,900 acres of scattered BLM inholdings in exchange for 5,200 acres of their private land along Red Hill Road and in the Missouri River Breaks.

No formal process has yet been initiated on the land exchange. James said

he hopes to have a final proposal to the BLM within a week for the agency to consider. The BLM has rejected the Wilkses’ previous overtures and is also investigating whether fence builders hired by the brothers misaligned a new fence on BLM land and destroyed public property in the process. Critics have said no land exchange could proceed until the trespass issue is cleared up.

Although the value of any hunting access program cannot be considered as part of the BLM’s land exchange, James is hoping the public access will demonstrate to hunters that his employers are willing to compromise. Hunters have countered that as soon as any exchange is finalized, the Wilkses will stop allowing public access.

“It will continue in perpetuity as long as it’s working and people are respectful,” James said.

In a follow-up email to James he was asked: Should the land exchange fail, even after going through the BLM’s process, would the outlined public hunting access continue?

“It is somewhat premature to say definitively what would or would not remain in place if the BLM rejects the current proposal,” he wrote. “If sportsmen convince MFWP and BLM that the inholdings are a preferable manner in which to control the elk population and no exchange were necessary or desirable, then I would imagine that determination would have an effect on what additional lands were made available for public hunting.”

He added that he has “not had any detailed conversations with the Wilkses on this matter,” instead focusing on the land exchange proposal which he hoped would be successful and make such a consideration unnecessary. Yet he also referenced a previous overture by the Wilkses to open the Bullwhacker Road into the Missouri Breaks — provided the BLM agreed to negotiate in good faith. When the agency “terminated the discussions” James said the Wilkses withdrew their offer to open the road.

Because of the controversy surrounding the land exchange proposal and the lack of progress, James said Farris Wilks is tiring of the process. But James said he has seen difficult projects finally succeed after going through a formal procedure.

“I think there’s a huge opportunity for a win-win,” James said.

The Montana Wildlife Federation has for eight decades stood up for abundant wildlife, healthy habitat and public hunting opportunity. As part …

Elk trot across a pasture on the N Bar Ranch with the Big Snowy Mountains rising in the distance. The owners of the ranch, Dan and Farris Wilks, have floated a proposal that could open up 16,000 acres of the ranch to public hunting.

This map outlines lands owned by Dan and Farris Wilks that they are saying could be opened to public hunting in Fergus and Golden Valley counties.