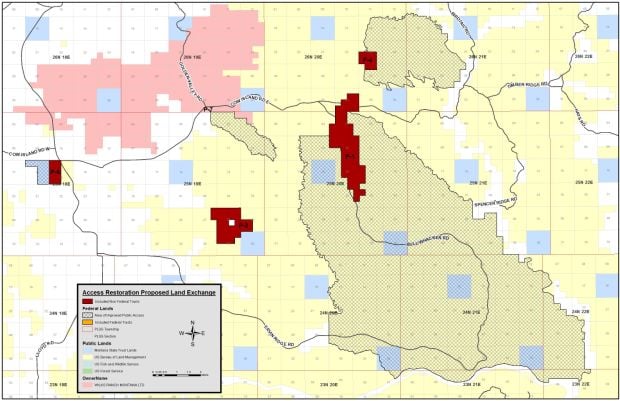 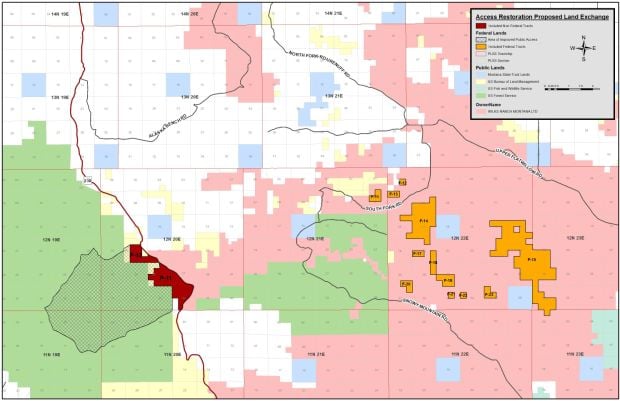 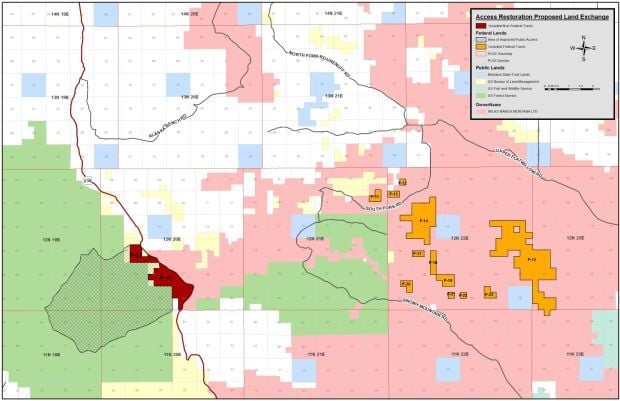 A week after revealing details of a central Montana land exchange to conservation groups and after more than a month of speculation by interested residents, the Bureau of Land Management has revealed the details of the proposal.

Dan and Farris Wilks, Texas brothers who have purchased several large ranches in Montana, are offering to provide more than 5,250 acres that would give access to the Snowy Mountains in Fergus County as well as access to the Upper Missouri River Breaks in Blaine County, an estimated 70,000 acres of public land. In exchange, they are seeking ownership of more than 4,860 acres in 12 landlocked BLM parcels surrounded by their N Bar Ranch in Fergus County.

Even before the proposal was announced, a group of Lewistown-area residents started a petition opposing any trade of the 2,700 acres of BLM land known as the Durfee Hills, which is included in the Wilks brothers’ proposal. That parcel can be accessed by airplane or helicopter and contains elk habitat valued by hunters. None of the BLM parcels has public road access.

For the BLM, the main attraction of the trade is a 2,200-acre parcel that would provide access along Bullwhacker Road into roughly 60,000 acres of federally owned land north of the Missouri River, which is valued by hunters for its bighorn sheep, elk and deer.

“The principal motivation for BLM in entertaining a land exchange is that it offers a potential avenue to restore public access to about 50,000 acres of Missouri Breaks backcountry,” Stan Benes, BLM’s Central Montana district manager, said in a prepared statement.

The BLM has been pursuing restoration of access to the Bullwhacker Coulee area in Blaine County since it was lost as a result of a judge’s ruling several years ago.

As an added incentive to hunters in the Lewistown-Fergus County region to part with the Durfee Hills, the Wilkses are offering to trade more than 1,200 acres along Red Hill Road in Fergus County that abuts the Lewis and Clark National Forest’s Big Snowy Mountains in the Coal Mine Coulee area.

The land would provide access to an estimated 10,000 acres of the forest, nearly four miles of frontage along Red Hill Road and three miles of creek habitat. It also would tie into a forest road that travels to the top of Big Baldy peak.

Although opponents claim that political pressure is being applied by the Wilkses through Montana’s congressional delegation, both Sen. Jon Tester and Rep. Steve Daines, through their offices, deny the charge.

The BLM has also announced that access to the Bullwhacker area is a priority this year, with the agency’s state director saying an ATV route, at minimum, would be constructed to the land by fall if the land exchange proposal withers.

Proponents have said the public access provided by the exchange greatly exceeds the value of hanging on to the Durfee Hills to benefit the people who can afford to pay to fly into the area.

The BLM will begin preparing an environmental assessment analyzing different methods of restoring public access to the Bullwhacker, one of which would be the potential land exchange. The public will be asked to provide additional ideas they may have during the scoping process for the EA.

“Emotions have run high amid the loss of access in the Bullwhacker, fueled by speculation regarding a land exchange,” Benes said. “I would ask that folks take a step back and help us take a reasoned look at the merits and impacts of the various options.

“Beginning with the scoping process and continuing throughout the preparation of the EA, there will be many opportunities for the public to weigh in,” he said.

The public may view the Wilks brothers’ preliminary proposal with maps, as well as BLM maps, on the BLM’s website at www.blm.gov/mt.

For more information about access on BLM-managed lands, contact realty specialist Jim Ledger at 406-329-3733, Stan Benes at 406-538-1900, or visit http://blm.gov/ptld. If you have comments or an option for the BLM to consider, you may send an email to blm_mt_public_access@blm.gov.

First of its kind: Land exchange would be major windfall for DNRC

A Texas businessman has proposed a land exchange with the state that, if approved, would give the Montana Department of Natural Resources and …