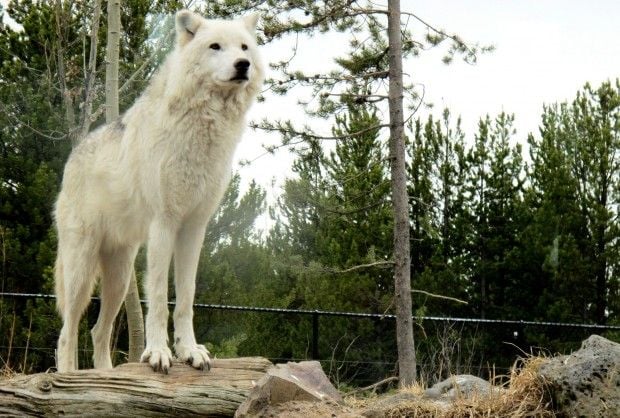 Even experts can have difficulty telling the difference between a wolf, like this one at the Grizzly and Wolf Discovery Center in West Yellowstone, and a coyote. 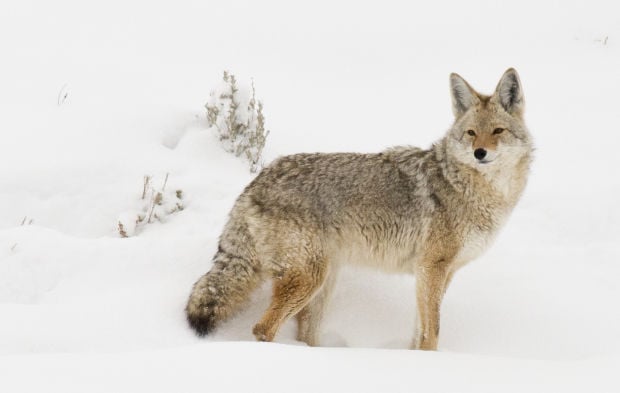 Coyotes are about half the size of an adult gray wolf.

Most of the time, wolf researcher Dan MacNulty can tell the difference between the apex predators and coyotes.

In his work at Yellowstone National Park, MacNulty routinely has to correct bystanders confused by the wild canines.

“I can’t tell you how many times I’ve had people point and tell me to look at the wolf,” said MacNulty, an assistant professor of wildlife ecology at Utah State University. “I hate to rain on their parade and tell them it is a coyote. It is such a buzz kill.”

Telling the two animals apart — one protected by federal law, the other considered a varmint ripe for culling — can be difficult to the untrained eye, MacNulty says.

A coyote hunter who killed a 3-year-old female gray wolf Dec. 28 outside Beaver, Utah, has said he couldn’t tell the difference.

But with Utah residents increasingly reporting sightings of gray wolves traversing wild lands from the high Uintas in the north to the Grand Canyon in the south, and a state-sponsored bounty on coyotes — with more than 14,000 killed in the first two years of the program — the confusion may soon come to a head.

U.S. Fish and Wildlife Service and Utah Division of Wildlife Resources law officials are investigating the incident and reports are expected later this week.

Wolf watchers still are wondering if the Utah canine is the same wolf that had been hanging around the north rim of the Grand Canyon late last year. Biologists say the Grand Canyon and Utah wolves were wearing different collars.

After studying wolves for two decades in Yellowstone, Minnesota and the Canadian Arctic, MacNulty understands how people can mistake coyotes for wolves and vice versa.

“Depending on the conditions, it can be difficult to tell the difference between the two,” MacNulty said. “There have certainly been times when I have seen an animal from a distance in low light conditions and in heavy vegetation. I wasn’t 100 percent sure of what the animal was until I watched it for a while. There is a big difference between seeing an animal at 20 yards or 200 yards.”

The wolf was reported to be 70 pounds — on the small side for adult gray wolves, but still substantially larger than a big coyote.

According to Montana wildlife officials, gray wolves weigh 70 to 120 pounds, while coyotes weigh between 25 and 40 pounds. That state has posted online drawings and listed the distinctive characteristics of the two canines to help hunters distinguish between them.

Coyotes are not protected in Utah. And the state does not require any training or hunting licenses for those who want to kill coyotes. To register for the program, would-be hunters simply must take an online test with 10 true-or-false questions.

In the second year of the program, which ended June 30, more than 7,000 coyotes were turned in for the cash.

Kirk Robinson, executive director of the Salt Lake City-based Western Wildlife Conservancy, previously told the Salt Lake Tribune the bounty program is “ineffective” and a “waste of money” as well as “a threat to wolf recovery.”

Whether or not they have established territory and packs in Utah — and there is no documented proof they have — wolves are visiting the state on a more frequent basis. At least two, and possibly three, wolves were documented in the state last year.

Leslie McFarlane, mammals program coordinator with DWR, said it appears there were no other wolves traveling with the animal killed near Beaver, Utah.

“We have random sightings throughout the state all the time,” she said. “We work to verify those and look at the credibility of the reports.”

The wolf killed in Beaver, one that had its picture taken while crossing Highway 14 in Cedar Canyon (and possibly the same wolf that was shot), and a male that was hanging out in the Uinta Mountains last fall are the only recent documented cases, McFarlane said.

MacNulty understands how confusion can happen.

“It is hard to pass judgment on whether or not this individual was able to determine if it was a wolf before he shot it,” MacNulty said. “This coyote hunter was out hunting coyotes. He saw a wild canid and he may have assumed it was a coyote, given the fact that wolves don’t really exist in Utah. It is completely plausible it was a case of mistaken identity.”

Mike Jimenez, northern rocky mountain wolf recovery coordinator for the U.S. Fish and Wildlife Service, said it is important to note that while unfortunate, the shooting of the female wolf is actually a sign that efforts to re-establish wolves are working.

“This is really a statement of the success of the (Endangered Species Act) program,” Jimenez said. “(Wolf packs) are hard-wired to expand. This didn’t happen because we are having problems. This is what is supposed to happen.

“Unfortunately for some wolves, they show up in places where they get hit by a car or shot, but they are also showing up in places that work.”

Can you tell a wolf from a coyote?

Visit the Montana Fish, Wildlife and Parks website for a wolf and coyote indentification primer.

Even experts can have difficulty telling the difference between a wolf, like this one at the Grizzly and Wolf Discovery Center in West Yellowstone, and a coyote.

Coyotes are about half the size of an adult gray wolf.