The temperature is climbing toward 80 degrees on a hot August afternoon as we descend into the cool black confines of Big Ice Cave in the Pryor Mountains.

Open to the public, this yawning maw of frozen water offers a glimpse into an underworld that has hooked people on becoming cavers, or wanting to explore caves. (Cavers are not to be confused with spelunkers, the caving equivalent of golf’s duffers. As the saying goes, cavers rescue spelunkers because they are unprepared.)

I was tagging along with Montana Conservation Corps interns Carl Froslie, a Billings-raised Montana State University engineering student, and Kara Posso, an Austin, Texas, geology graduate. Loaded down with ropes, climbing harnesses, ice axes and ice crampons, they showed me a place that few visitors to Big Ice Cave get to see.

A locked grate at the end of the cave keeps inexperienced explorers from descending below the main floor. The key can be acquired from the Beartooth Ranger District by those with caving experience. To maneuver the gate, Froslie first had to use his ice axe to chip out the ends of the metal which were frozen into the ground.

Once that was accomplished and the grate lifted, Froslie tied off a climbing rope, clipped his harness to the rope and descended into the dark cavity under the glow of our three bright headlamps. Following him we explored the base of the ice flow, which halted like pooled, melted candle wax at the bottom. The dirt portion of the cave floor was soft, powdery and fine. The air smelled damp and musty like an old basement. The only sounds were our movements and voices.

In the lower cave chamber Froslie showed off dogtooth spar, a mineral deposit of calcite leached from the surrounding limestone from which the cave has eroded. The rumpled rock resembles row upon row of a dog’s teeth, but also conjures up thoughts of being in the belly of a beast, with us soon to be digested.

Also embedded in the cave’s ceiling were the approximately 350-million-year-old fossils of small snail shells, corals and sea fans, creatures from a time when this part of Montana was a shallow sea. On the floor of the cave a packrat’s dropping provided nourishment for a threadlike white fungi that stretched several inches upward, looking too thin to support itself.

Just above the fungi is the apocalyptic looking remains of what was once a lower observation deck in the cave, now almost wholly encased in ice. At one time the public could descend to the deck via a circular staircase for a guided tour. When the tours stopped, the entire cave was fenced off before the Forest Service decided to build the upper observation platform near the mouth of the cave.

The most amazing part of the cave, however, was tucked in the opposite corner. There, ice crystals the size of quarters — but triangular in shape — delicately clung in a tight patch to the cave’s ceiling. When lit by headlamps the frost resembled a giant crystalline chandelier. The fragility of the feature is highlighted by the thought that if removed from the 32-degree cave and brought into the sunlight, the crystals would quickly melt.

After belly crawling through a tight spot just past the crystals, we stood erect in a chamber where one entire wall was a vertical sheet of solid ice. I never imagined that rock and ice could combine to create such a captivating place. It’s no wonder Froslie is hooked on cave exploration.

“Caving is one of the activities that anyone can get into,” he explained. “Not everyone can go into space or ride in a submarine. And probably only 10 percent of the caves (in the world) have ever been explored.”

The underground world, where water has eroded limestone to create natural cathedrals of awe-inspiring visions, has captured Froslie’s imagination and now most of his free time. He talked of snowshoeing five miles into the mountains in four feet of snow just to explore a cave that can’t be safely investigated in warmer temperatures because of underground waterfalls. In the winter, most of those falls are frozen, but even then a wetsuit is standard equipment.

He also recounted hiking seven miles to explore a 2.5-mile long cave that required him to constrict his chest for 200 feet to crawl to the first large chamber. The entire trip took him 24 hours.

What’s the draw of being mired in muck and water in the cold, dank confines of a claustrophobic cave?

But underground there is still more for cavers like Froslie and Posso to explore. Big Ice Cave may be cool, but they are looking for even bigger thrills and chills.

A lot of exploration

Caves are natural cavities large enough for a person to enter.

Most caves are found in carbonate rocks (limestone) and formed by dilute acidic water dissolving the calcium carbonate.

Most Custer Gallatin National Forest caves are found in the Beartooth Ranger District’s Pryor Mountains. Unless otherwise posted, you may enter and explore caves at your own risk. Cave visitors are responsible for their own safety and should take precautions to learn safety procedures and utilize proper equipment.

Caves may pose special dangers to visitors due to hazards which may require special skills and equipment. In addition to physical hazards like falling rock, pits and tight passages, some of these caves have naturally occurring uranium deposits and high levels of radon (a poisonous gas). Limiting your exposure to both uranium minerals and radon is advised.

Big Ice Cave, in the Pryor Mountains, has been partially developed to allow visitors easier access. Walking beyond the cave platform is not recommended.

Beartooth backpackers near goal of hiking to 330 mountain lakes

As difficult as it is to comprehend, it could take Kim Latterell three days or more to backpack 3.5 miles in the Beartooth Mountains this summer.

Wild horse advocates are asking a judge in Montana to stop a planned mustang roundup that they say would destroy the genetic viability of a herd descended from the mounts of Spanish conquistadors.

A Park County, Wyoming, commissioner was rescued Sunday from a mountain slope after his foot became trapped under a boulder. 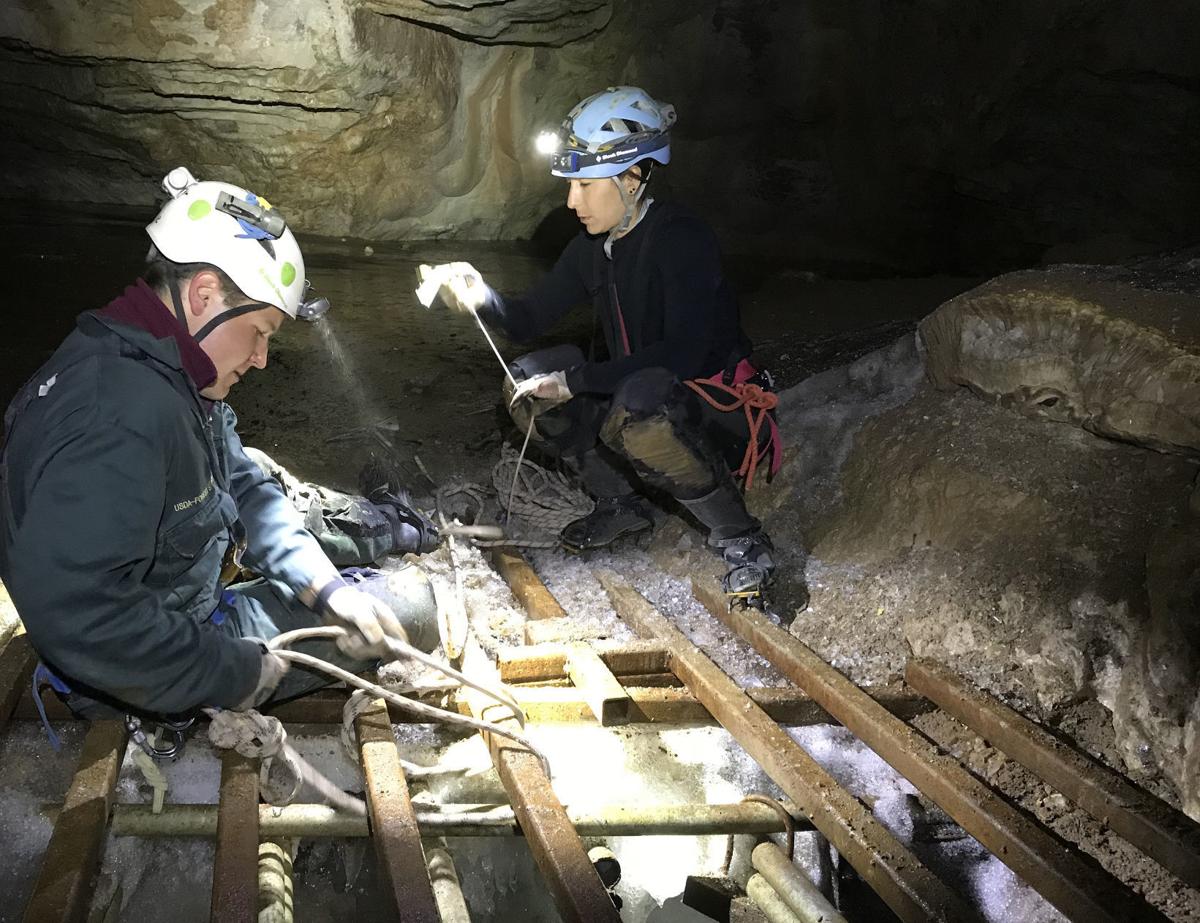 Carl Froslie, at left, and Kara Posso, of the Montana Conservation Corps, prepare to descend into the lower chamber of Big Ice Cave in the Pryor Mountains recently. The grate is locked to keep out those not equipped for the icy underworld conditions. 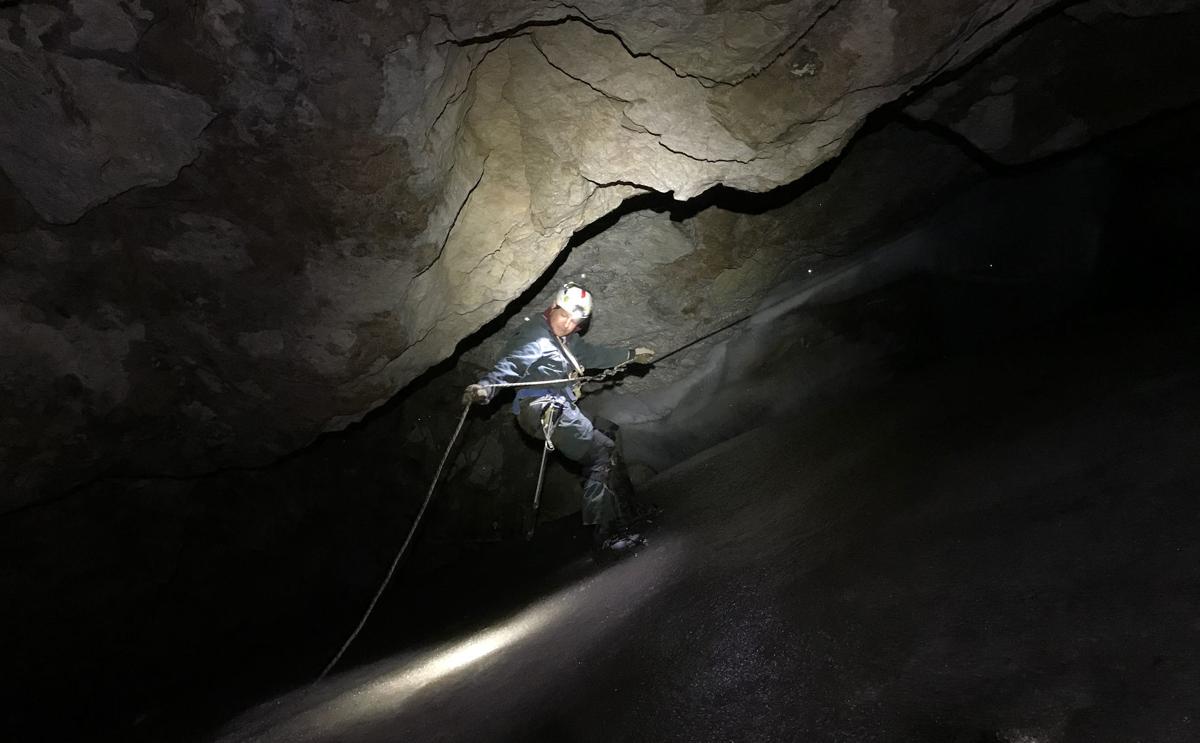 Froslie descends into the lower chamber via a climbing harness and while wearing ice crampons because the slope is solid ice. 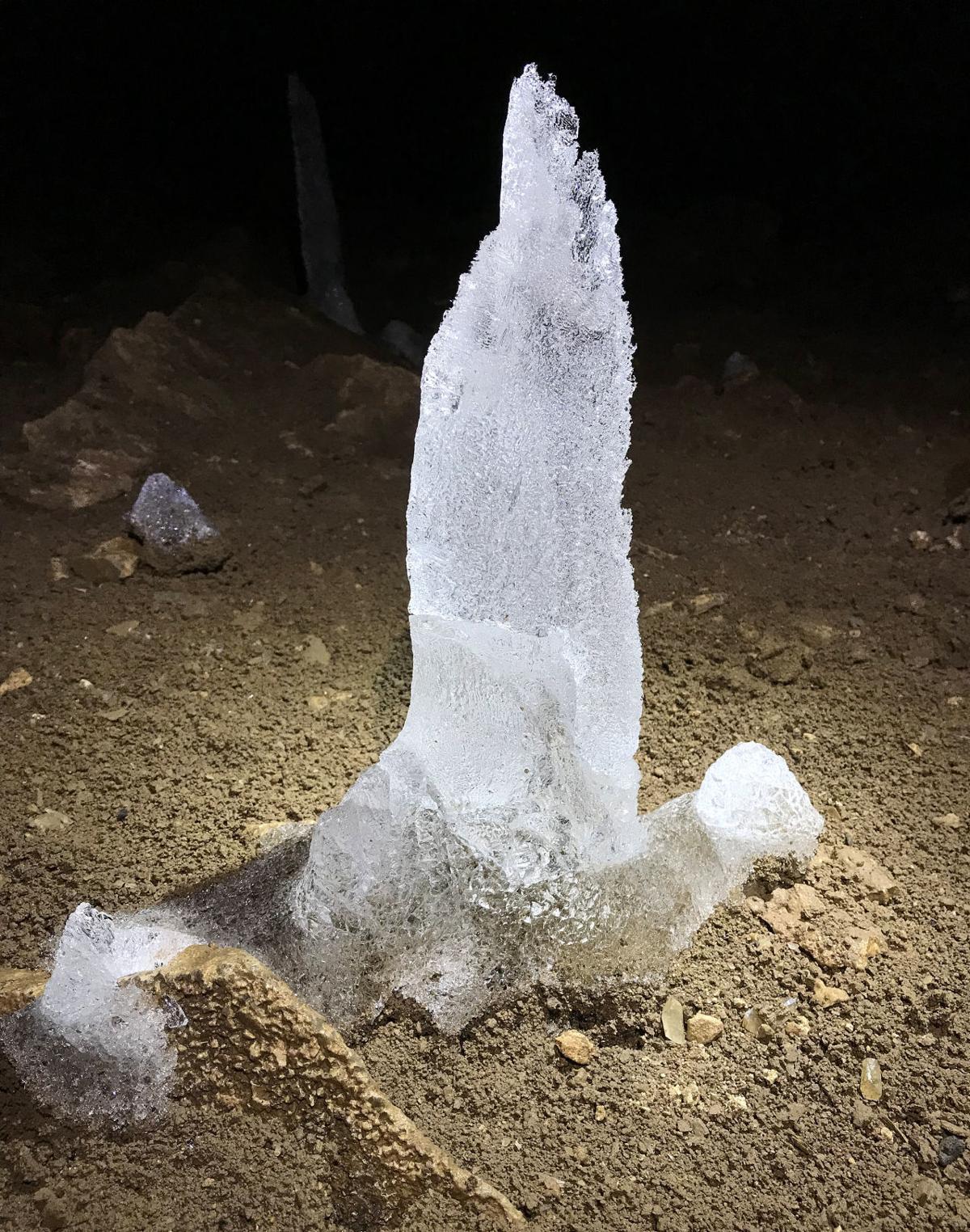 A 2-foot high column of ice rises from the floor of the Big Ice Cave. Many caves have such stalagmites, but they are usually composed of minerals, not frozen water.