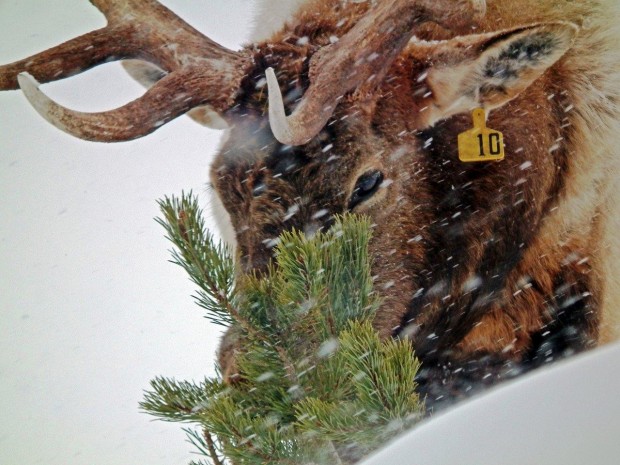 A Yellowstone National Park bull elk known as No. 10, for its ear tag, apparently was killed by a wolf pack in the park over the weekend. 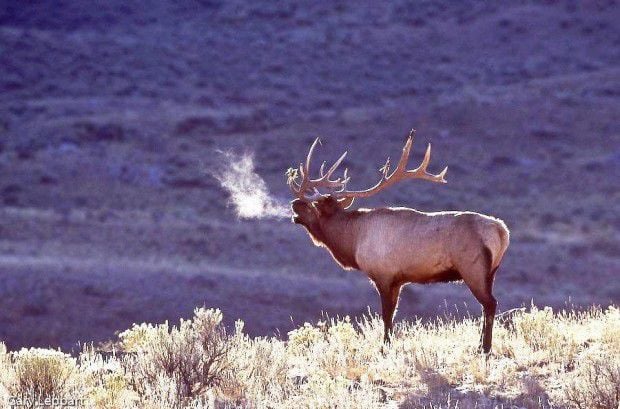 Yellowstone National Park's bull elk No. 10 became well-known for his presence at Mammoth Hot Springs during the fall rut.

An internationally famous Yellowstone National Park bull elk has died, likely killed by the Canyon wolf pack, which was seen feeding on his carcass.

Elk No. 10, the last to wear a yellow ear tag with the number 10 on it, was found dead about a half mile east of the Wraith Falls trailhead in the park on Saturday, according to Al Nash, the park's chief of public affairs. Wraith Falls is located between Mammoth Hot Springs and Tower Fall.

Elk No. 10 became internationally famous after the British Broadcasting Corp. made a film on elk that featured the Mammoth animals as well as those in Estes Park, Colo. Clips from the films “Street Fighters” and “Showdown in Elk Town” can still be found on YouTube.

"He had not been regularly seen in the Mammoth area in recent years," Nash said. "But both No. 6 and No. 10 were fixtures for a time in Mammoth, both big powerful bulls that were seen several fall rutting seasons here and they would spar with each other."

Nash said the elk was estimated to be between 16 and 18 years old.

The large bull elk attracted attention in Gardiner in 2001 when he got his antlers tangled in a badminton net and poles at the Mammoth school. The only way to remove the net was to tranquilize the elk and saw off its antlers. That's when the elk was given its yellow ear tag to ensure that any hunters who saw it that fall would know the elk's meat was unsafe to eat because of the tranquilizer.

“I remember in 2006 when Elk 10 arrived on the Mammoth scene on Sept. 10,” wrote Jim Halfpenny, a Gardner-based naturalist who gives tours in the park, in an email. “He was now big and took the harem over from another bull. In the coming years, he and Elk 6 did battle on more than one occasion. In more recent years he did not come into Mammoth, but maintained a harem of his own between the YCC camp and Mammoth Terraces. Being slightly old, wiser, and lacking the body weight of his youth, it was now time to retreat to a more private place with a smaller harem. He let the younger bulls compete for the prime grazing habitat of Mammoth and the cows that are attracted there.”

Rival elk No. 6 died a humiliating death in 2009 after jumping a barbed-wire fence in Gardiner, tangling his feet and getting stuck on his back, suffocating. No. 6 was estimated to be 15 years old and weighed 725 pounds. He scored 356 5/8 on the Boone and Crockett scoring system, a trophy animal.

Cow elk regularly live into their teens, and occasionally into their 20s. But the physical toll of rut often mean bulls live much shorter lives. That makes No. 10’s tenure even more remarkable, Halfpenny said.

Bull elk often hang out in the Wraith Falls area during the winter, but Halfpenny said there aren’t many left at the site since the 2011 hunting season. Many of the animals migrated out of the park that fall following a heavy snowstorm and were shot by hunters. By his own count, Halfpenny said 250 park bulls were shot that season north of the Yellowstone border.

Halfpenny said No. 10 may not have been as aggressive in the long run as No. 6, but he had “held court at Mammoth” for many years, chasing off other bull elk rivals during the mating season, as well as the occasional car, RV or tourist.

Look through the top stories from April 2013.

A Yellowstone National Park bull elk known as No. 10, for its ear tag, apparently was killed by a wolf pack in the park over the weekend.

Yellowstone National Park's bull elk No. 10 became well-known for his presence at Mammoth Hot Springs during the fall rut.