HOLTER RESERVOIR — With a strong tug the 1/8-ounce lead jig came loose from the pine tree branch it had accidentally landed on and rocketed back at the boat as if it had been shot from a rifle.

Bang! Luckily it struck the side of the aluminum boat and not one of the anglers.

“Losing jigs is part of the game,” said Kit Johnson with a chuckle. “If you’re not losing jigs, you’re not fishing right.”

Luckily for Kit, he has a never-ending supply of jigs. He and his son, Trevor, are the brains and brawn behind Helena-based Kit’s Tackle, which makes a variety of fishing jigs, flies and rods developed, tested and proven effective on Montana waters. The two are now also offering their expertise as fishing guides.

Step into the Johnson’s boat and it’s a nonstop day of education: from prime times on the water to proper tackle, technique and even a bit of history. And it’s hard to beat the beauty of this 30-mile long Missouri River reservoir’s canyon section, known as the Gates of the Mountains.

“Every time I come out here I think of Lewis and Clark,” Kit said of the intrepid early explorers of the West. “They’re the ones who named it. They got about 400 yards from the mouth of the canyon and the cliffs looked like they closed off the river.”

Meriwether Lewis said in his journal entry for July 19, 1805, about the canyon that still holds the name he gave it: “every object here wears a dark and gloomy aspect. the tow[er]ing and projecting rocks in many places seem ready to tumble on us.”

There’s nothing gloomy or dark about fishing with the Johnsons, though, even when the reservoir’s trout are slow to bite.

“We’ll catch something,” Kit promised. “We always do.”

Last week wasn’t the best time to be fishing. The water’s rainbow trout and yellow perch were just finishing up spawning, while the walleye were in the middle of the spring spawn. That meant fewer fish willing to bite, but still enough to not get skunked.

“The walleye spawn at 44 to 48 degrees,” Kit explained, with the spawn fluctuating over a span of about three to four weeks as the water temperature rises and falls.

Once the water consistently warms to more than 50 degrees, and after the fish have had about two to three weeks to rest up after spawning, the bite typically gets better.

“We love from about Mother’s Day to mid-June,” Kit said, when the fish are actively feeding to put weight back on after the spawn.

Holter is home to a variety of fish including reel-screamingly strong rainbows and a few monster brown trout, perch, walleye and the occasional burbot. A day fishing with the Johnsons can provide a smorgasbord of options, including: pounding the shoreline from the boat with jigs using lightweight spinning rods; casting wet flies with a strike indicator while drifting with the wind on shallow flats; and soaking worms above a lead weight to catch fat perch for a tasty supper.

Kit said it wasn’t until the mid-1950s that Montana Fish, Wildlife and Parks planted walleye in the reservoir, the last in a chain of three reservoirs that begins with Canyon Ferry, then Hauser and finally Holter — all located between Townsend and Great Falls in west-central Montana. Once word got out that there were some big walleye in Holter, anglers began keying on the fish. For fishermen used to targeting trout, it took a while to figure out the proper presentation.

“Walleye require a much slower jig presentation,” Kit said, something the Johnson’s have perfected.

Instead of trolling, they position their boat about 60 to 70 feet out and perpendicular to the shoreline.

From the boat they cast into the shallows, let the jig sink to the bottom and then with a swift jerk pop the jig before letting it sink again. Once the line goes slack, they jerk their rod tip again, repeating the process within the first 15 to 20 feet of water.

“There’s only two reasons the jig stops,” Kit said. “It’s either in a fish’s mouth or you hit bottom.”

The popping movement is meant to imitate crayfish and perch, two of the main forage species in the lake. The swift movement through the water is felt by fish in their lateral lines, prompting swift strikes. Kit prefers a brown firetiger jig to mimic the prey, or olive and black to look like a local sculpin. Black for brown (trout) is his reminder when keying on that species.

To get the right action on their spinning rods, the Johnsons spool their reels with 4 to 6 pound monofilament line.

“We love mono because there is so much stretch in it,” Trevor said. “That stretch lets you land fish that are lightly hooked. With braided line they could make a head turn and, boom, they’re off. With mono it’s like a big rubber snubber.”

There’s also a downside to the mono, as evidenced by the hurtling jig head pulled free from an obstruction. Kit said he once got hit so hard in the leg by a flying jig that it almost put him to his knees. It’s one of the reasons they always wear sunglasses. The other reason is to protect them from wind-blown or errant fly casters.

“The saying in this boat is that piercings are free but indiscriminate,” Kit joked.

He ties on his jigs by doubling the line and using an improved clinch knot. The extra line in the knot gives it a 7.2-pound breaking point.

Flies on a lake

In what seemed like an odd transition, the Johnsons also advocated fishing Holter Reservoir with fly rods. Using a 9-foot, 3X leader they cast wet flies resembling leeches on the lee side of the boat in waters about 3 to 6 feet deep. The shallows are within sight of the Gates of the Mountain boat launch, and in the summer will contain ample weed growth that supports aquatic insects, baitfish and bigger fish looking for a meal.

“These fish are not leader shy,” Trevor said. “If you go much lighter you’ll break fish off. They are so powerful in the summer.”

Casting out about 10 to 15 yards from the boat, it’s just a matter of watching the strike indicator to detect the subtle trout bites. The indicator is placed about 4 to 5 feet above the fly.

“One thing I like about Holter is the variety of fishing,” Trevor said. “It’s no Fort Peck, but there are still a lot of opportunities to catch walleye, brown trout, rainbows, burbot and perch — big perch, on average about 8 to 10 inches.”

If you’ve ever doodled a cartoon on a piece of paper during school, or at an office meeting that drones on endlessly, Dave Hartman is an inspiration.

FORT SMITH — If Mike Ruggles had a magic wand and could make the Bighorn River’s flow perfect for rainbow and brown trout, he would keep it at…

Big water in Bighorn River: All are struggling with high flows

From the large picture windows of his log home, Mike McMeans watched the Bighorn River rush past the greening spring grass of his front yard l…

The Gates of the Mountain section of Holter Reservoir is one of the few places that still holds a name from explorer Meriwether Lewis' expedition upstream in 1805. Although Lewis found the cliffs a bit dreary, today's boaters flock to the scenic section of water. 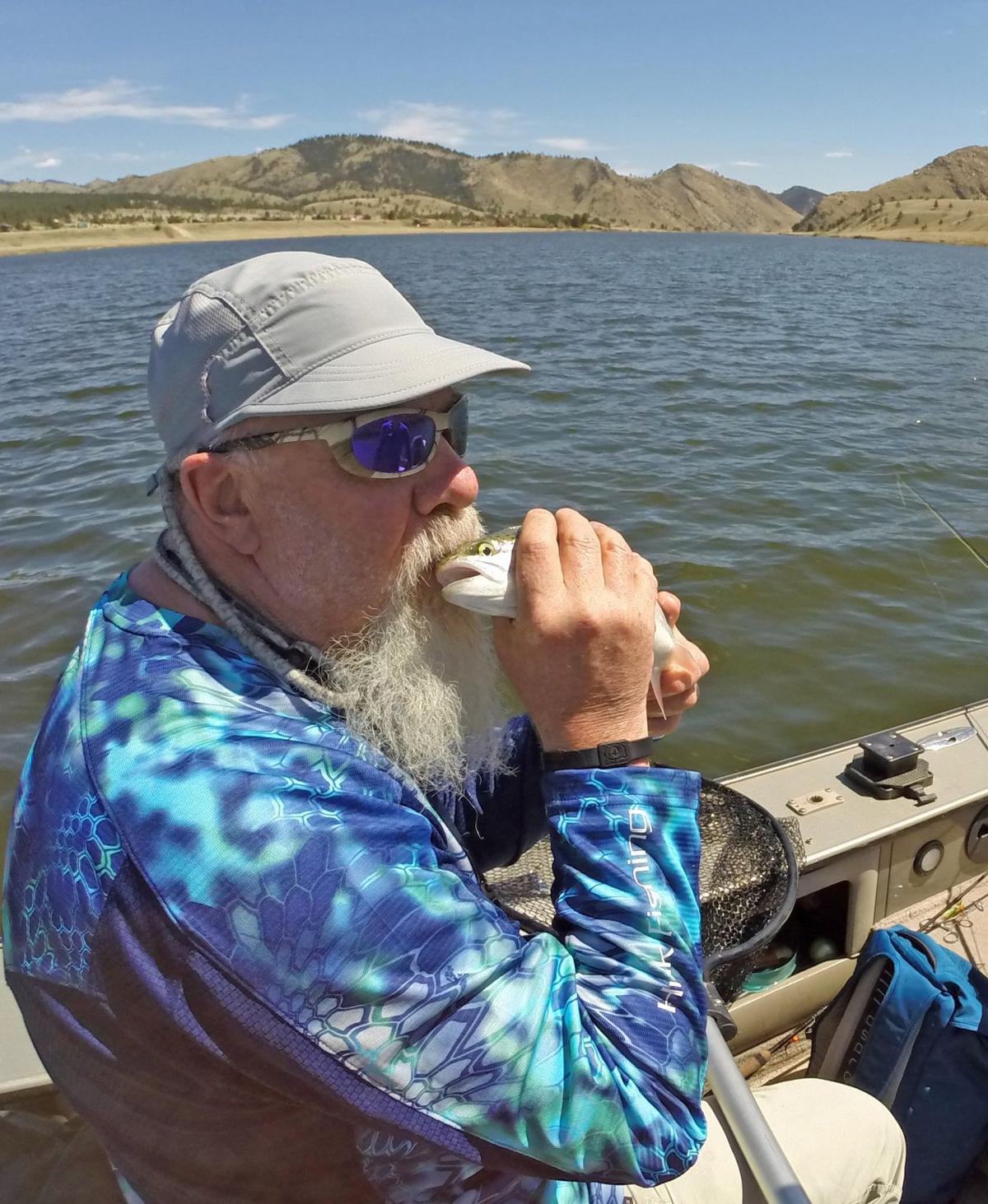 Kit Johnson shows a rainbow trout how much he loves the species. 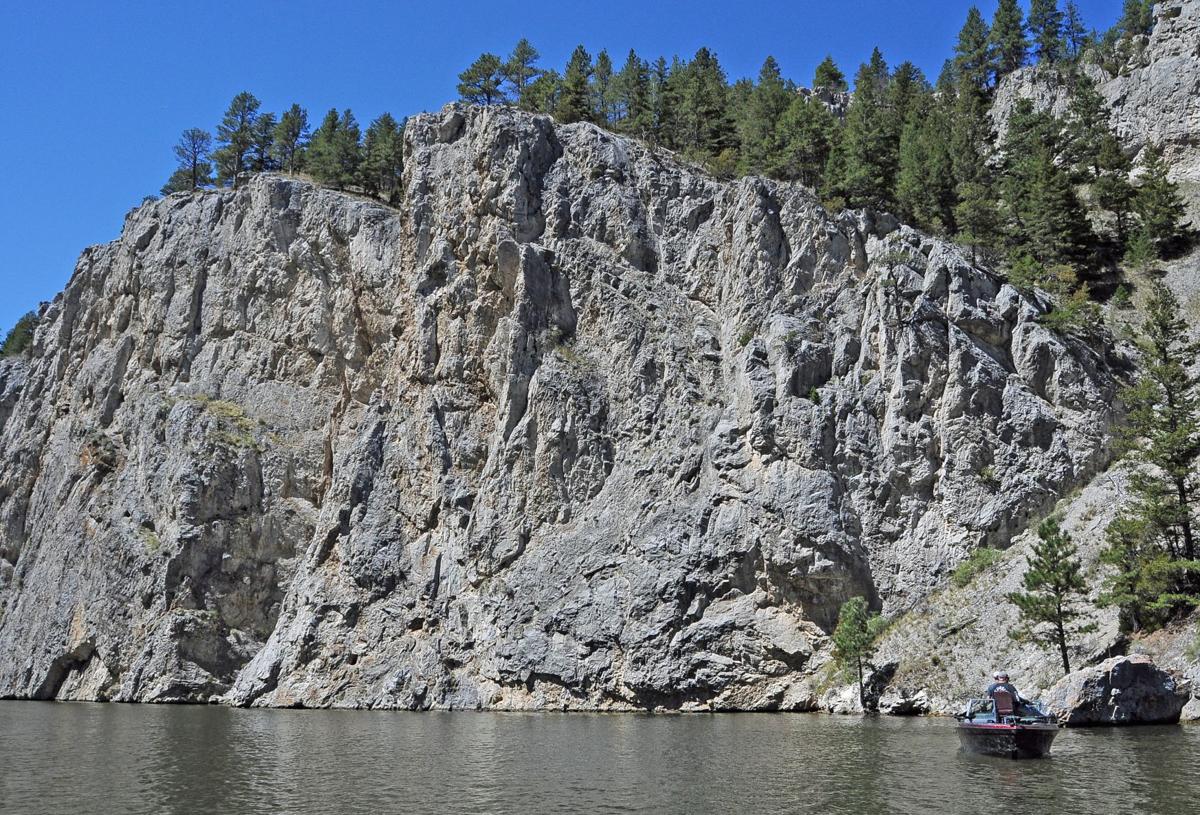 Steep cliffs rise sharply from Holter Reservoir in the Gates of the Mountain section. Anglers at the bottom right were casting to shore in hopes of hooking into a trout. 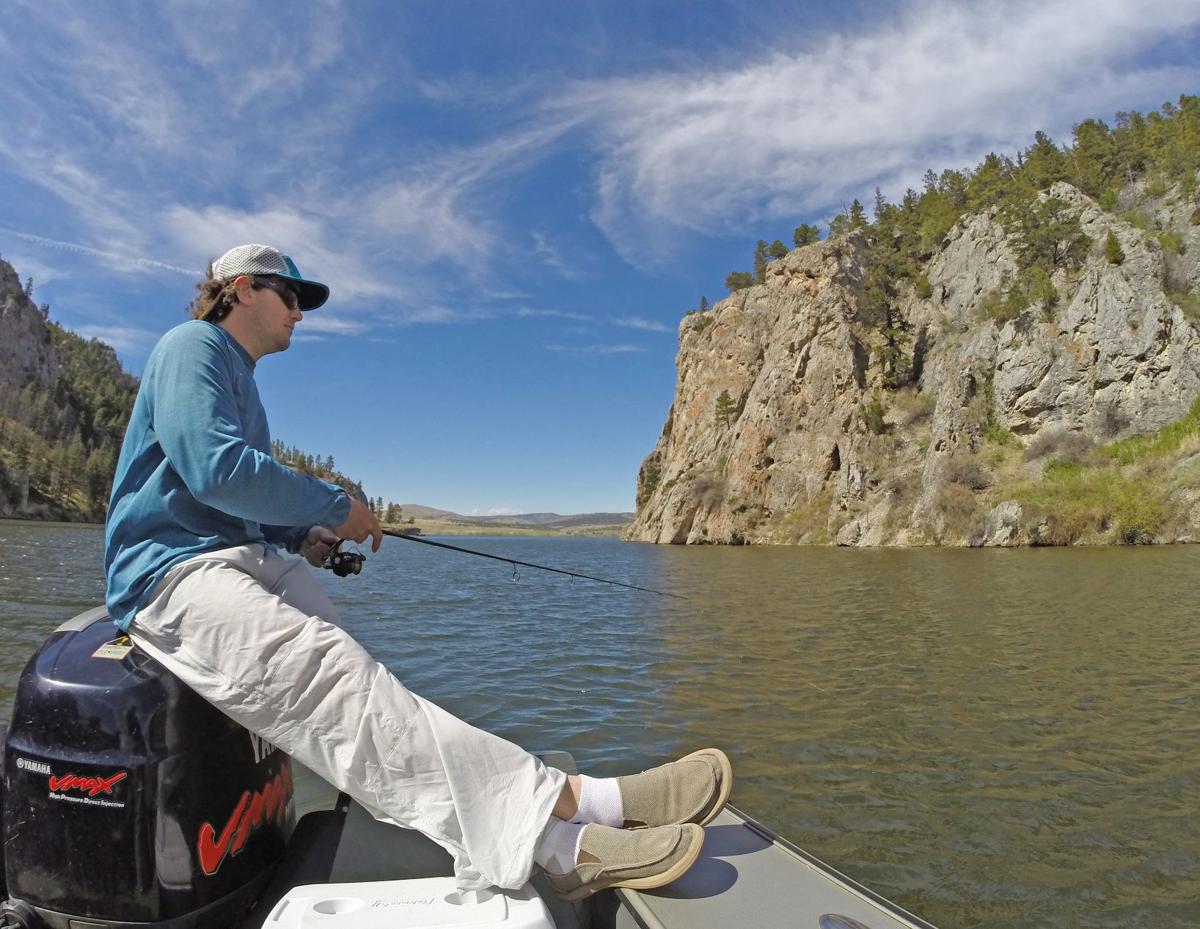 Trevor Johnson kicks back while casting for trout just inside the Gates of the Mountain section of Holter Reservoir last week. 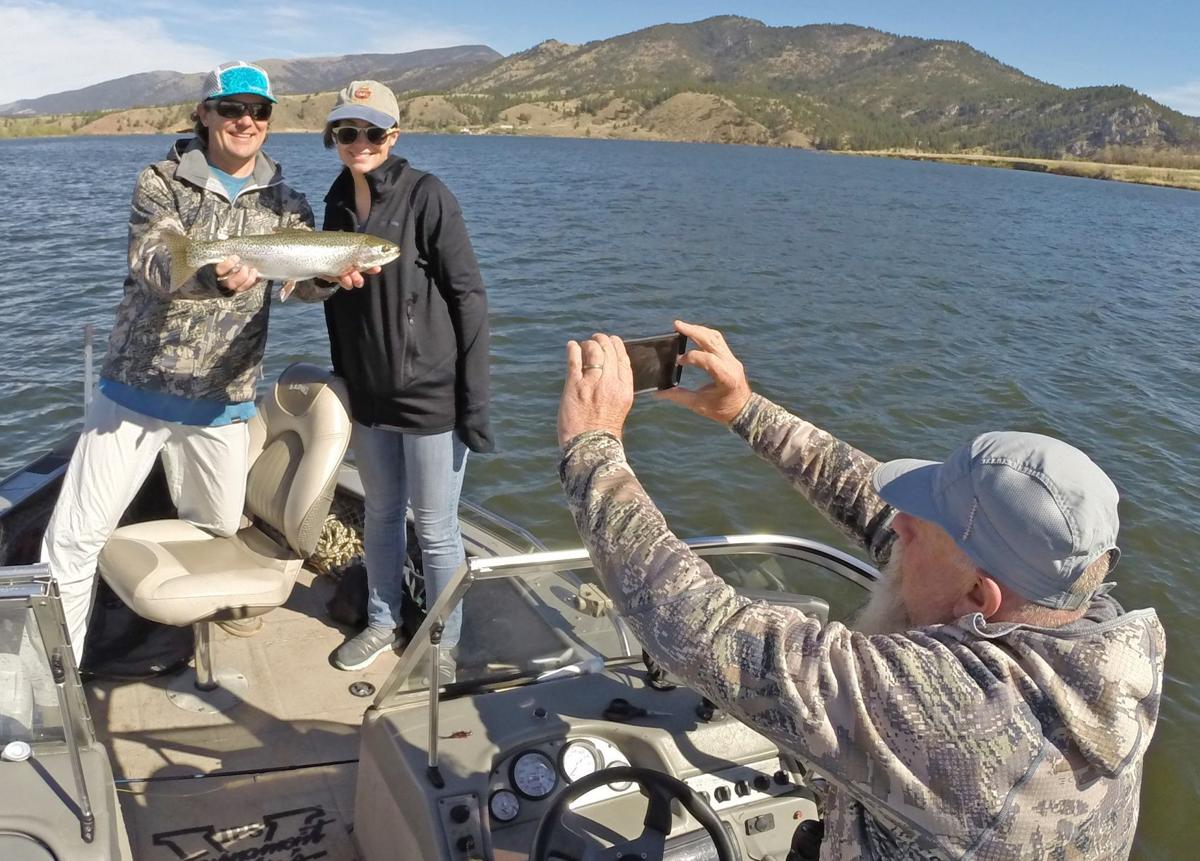 After a slow morning Kit Johnson holds up the first of what would be several rainbow trout caught while fishing Holter Reservoir last week.

The rainbow trout in Holter Lake seem to be especially strong, dancing across the water when hooked and dodging the boat when attempting to net them. 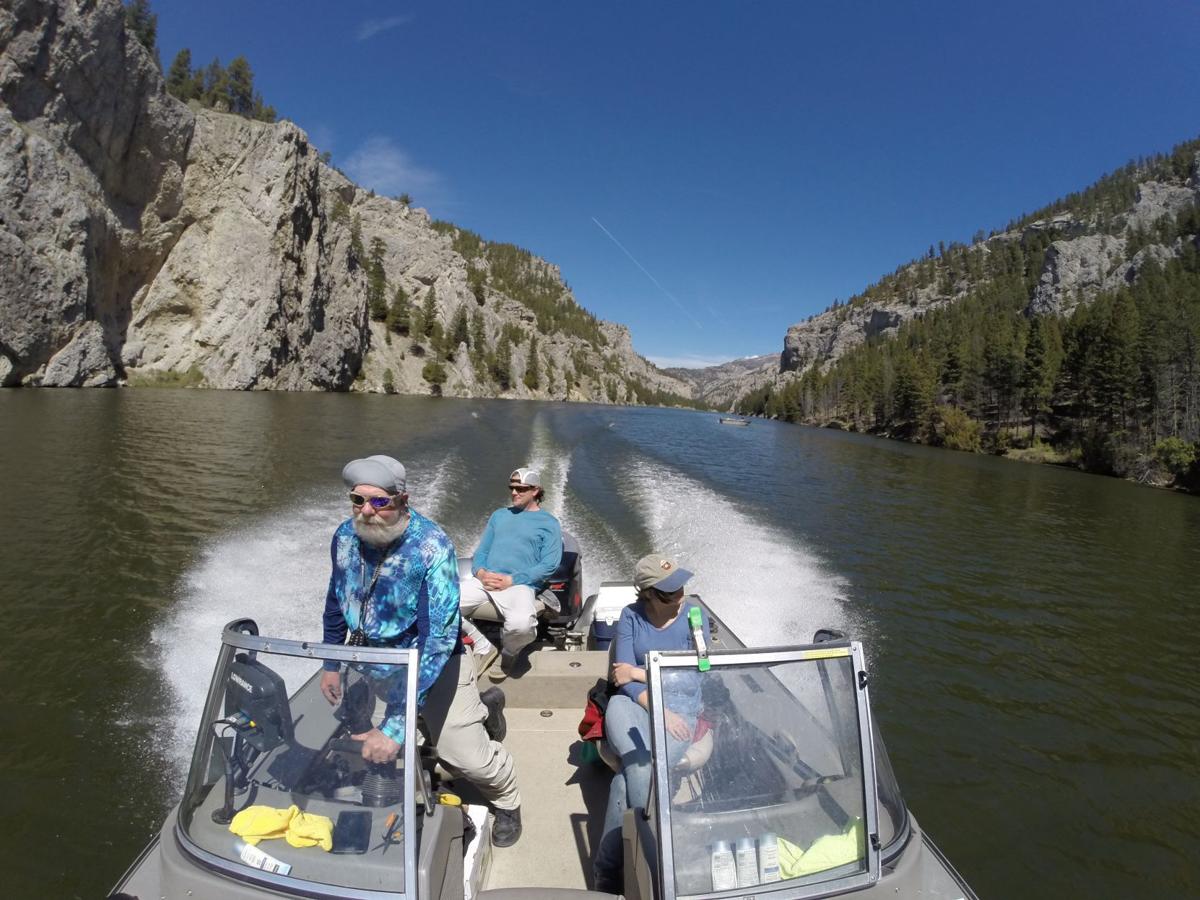 Kit Johnson cruises down the Gates of the Mountain section of Holter Reservoir on one of the first nice days of May. 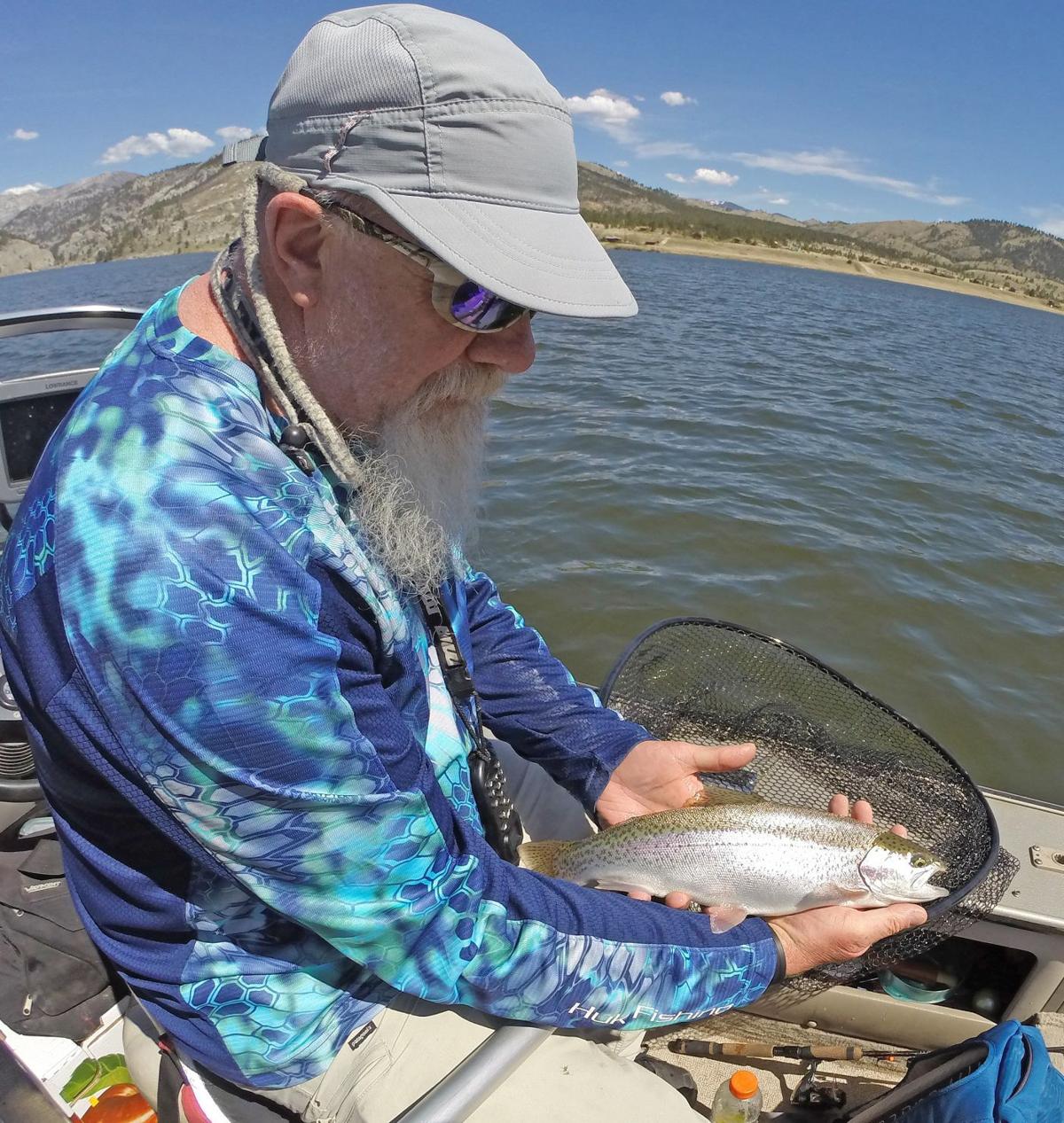 Some of the rainbows hadn't spawned and were bright silver. 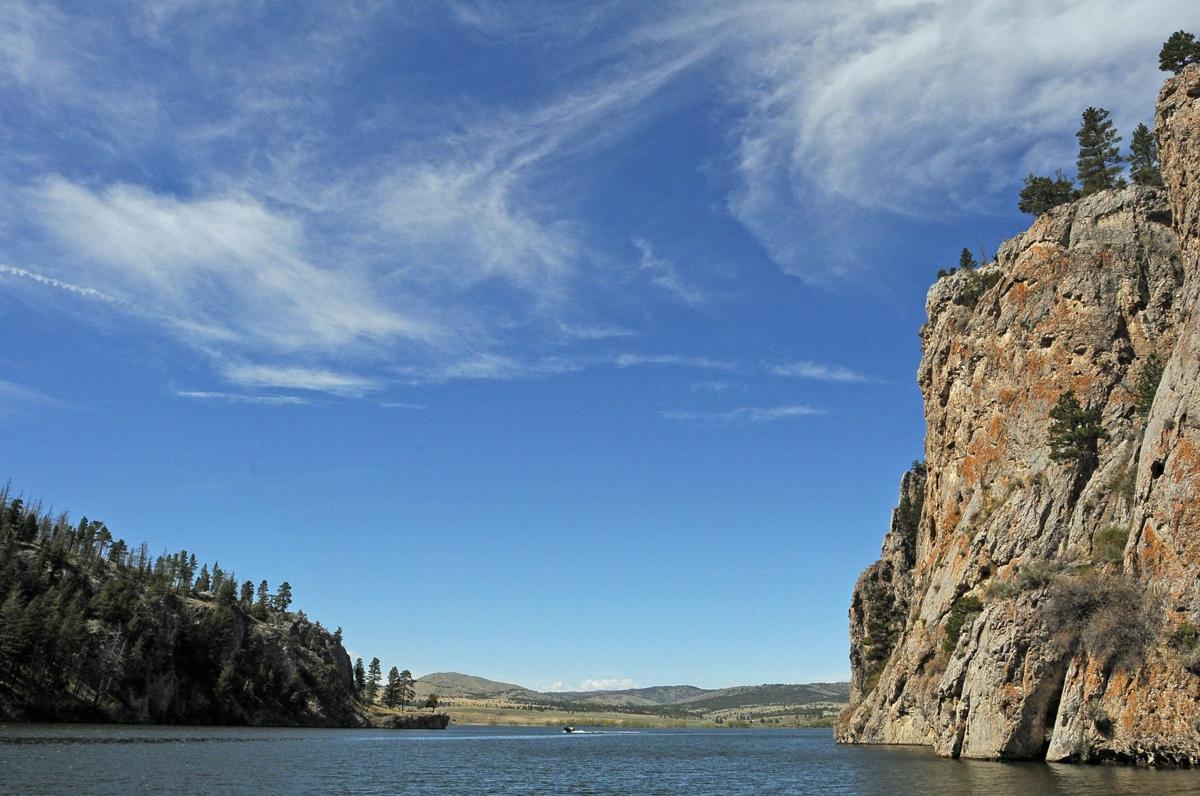 A boat cruises into the Gates of the Mountains from Holter Reservoir on a warm May day.