World Series: Follow updates as Dodgers and Rays face off in Game 3 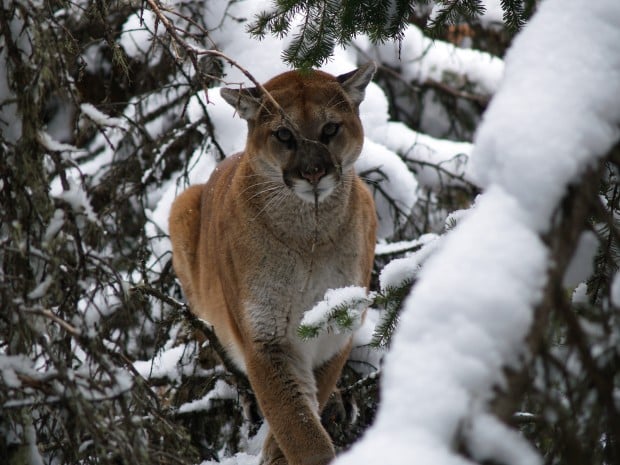 Mountain lions were treed in the winter to capture them for collaring in the Canadian study. The study found that adult male lions were more likely to kill less but bigger prey than females. 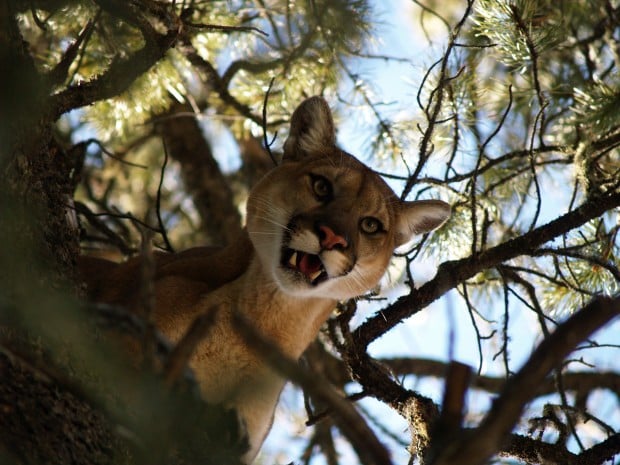 Fifty-four mountain lions in Alberta were tracked with GPS collars during a three-year study of the big cats. The recently published work details that cougars are eating more than previous studies had showed. 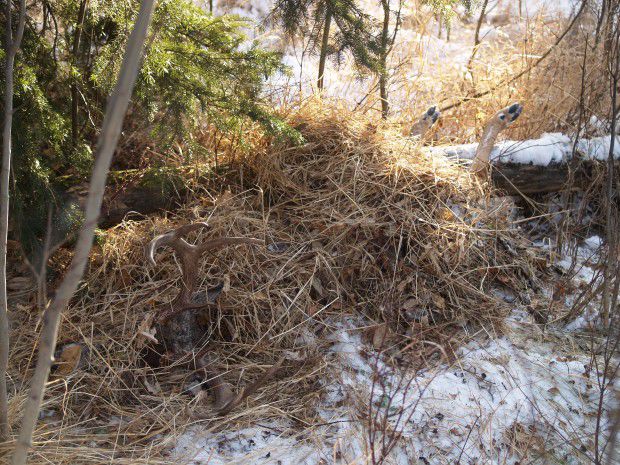 A whitetail buck killed by a mountain lion has been covered up between feedings.

Mountain lions, the largest members of the cat family in North America, may be heartier eaters than some researchers originally estimated.

“One of the most interesting things we found was how much more prey they kill in summer,” said Kyle Knopff, lead author of a three-year Canadian mountain lion study that was recently published in the Journal of Wildlife Management. “Just how focused they become on young of the year ungulates was surprising.”

Knopff is basing his conclusions on data collected from more than 1,500 kill sites while tracking 54 cougars with GPS collars. The collars allowed the University of Alberta researchers, including his wife Aliah, to move in quickly after a kill to identify what was taken and by which lion.

In the journal article Knopff writes that some previous studies “may have failed to identify higher kill rates for large carnivores in summer because methods in those studies did not permit researchers to locate many neonates or because sample size was too small.”

The use of GPS collars enabled Knopff and his colleagues to collect more data. As a result, he found that mountain lions killed more deer, elk and moose during the summer by focusing on juveniles and actually killed fewer animals in winter. The information contradicts previous studies conducted in Idaho.

“The Idaho estimates differed from our summer estimates by as much as 365 percent in terms of frequency of killing and 538 percent in terms of prey biomass,” Knopff wrote. “Because kill rate fundamentally influences the effect predators have on their prey, the discrepancy between studies represents a substantial difference in the capacity for cougars to impact ungulates.”

The study was conducted over 10 years in west-central Alberta, including the Bow Valley, Jasper National Park, portions of Banff National Park and in Clearwater County east of Banff. The terrain of the study area was a mixture of lodgepole pine and spruce forests at elevations ranging from 2,500 to 9,300 feet. The mountain lions' prey included deer, elk, bighorn sheep, coyotes, feral horses, beaver and porcupines.

Adult male cougars can weigh 140 to 165 pounds. One male cougar in Knopff's study tipped the scales at 180 pounds and primarily fed on moose and feral horses. Females typically weigh around 100 pounds. From nose to tail the big cats can measure 6.5 to 10 feet long. The average lifespan for a male is 8 to 10 years, 12 to 14 for females.

Great leapers and sprinters, cougars kill by latching onto their prey with their front claws and powerful forelegs and then biting the windpipe or spine along the neck with their large canine teeth. For smaller prey, lions may crush the animal's skull. On rare occasions lions have been known to attack humans.

“Our kill rate estimates indicate that adult cougars are highly effective predators, killing at rates at the upper end of those recorded for wolves in both frequency and biomass,” Knopff wrote.

In one prey encounter they studied, Knopff said a cougar brought down a feral horse less than 30 yards from where it attacked.

“I think our study showed they are very efficient predators,” he said.

Because of their adaptability, cougars are found from the Yukon to the Andes of South America, a larger range than any other big mammal in the Americas.

In studying cougar kill sites, the researchers publicized a couple of interesting details. One is that that female mountain lions with kittens kill more deer; the other is that adult male lions kill larger but fewer animals.

“We had one male cougar kill 18 moose in less than a year,” Knopff said.

Based on the Canadian data, the cougars killed on average .8 ungulates (mainly whitetail deer and moose) a week, an average of about 18 pounds a day. That statistic varied widely, though, based on the individual - from a low of .24 ungulates to a high of 1.38, or 18 to 41 pounds a day.

Those ungulates targeted tended to be young of the year or adults with yearlings, largely because they were easier to subdue.

Deer made up more than 75 percent of the diet for adult female lions in winter and summer. Adult males had a more varied diet, concentrating on moose (36 percent) in the summer and deer (44 percent) in the winter. All told, adult males targeted large ungulates for 62 percent of their diet. Subadult lions also ate more deer than other species, but like human teenagers they also varied their diet more opportunistically than adults.

On average, adult males killed an estimated 10,300 pounds of biomass annually compared to 9,400 pounds killed by females with young kittens.

Aliah Knopff said her portion of the study focused more on cougar-human interactions and the lion's habitat selection.

She said that as people have continued to build in more remote areas, cougars have had to adapt.

“These are actually quite adaptable carnivores,” she said, from changing their movements to become more nocturnal and avoid humans, to finding undisturbed islands within development to live in - such as along pipelines or well sites. The same can't be said for many other carnivores.

These more urban lions are mainly limited by human tolerance, she said. The people in rural Alberta who were interviewed for the study valued cougars highly, but not if they were killing pets or livestock.

“That's the challenge for cougar conservation when the backyard is becoming more overlapping,” she said.

Lion hunting is allowed in many Western states, including Montana and Wyoming. Hunters track and tree the big cats with hounds. Cougar kills are carefully regulated by state wildlife agencies.

Knopff writes that the Canadian study could be used by game managers to better calculate mountain lions' take of game animals and in turn reduce lion numbers to benefit deer, elk and moose populations. For example, hunting female cougars could reduce the number of deer taken in a specific area.

But such management can also produce unpredictable outcomes, he added. A lion population that is younger may lead to increased confrontations with humans.

Mountain lions were treed in the winter to capture them for collaring in the Canadian study. The study found that adult male lions were more likely to kill less but bigger prey than females.

Fifty-four mountain lions in Alberta were tracked with GPS collars during a three-year study of the big cats. The recently published work details that cougars are eating more than previous studies had showed.

A whitetail buck killed by a mountain lion has been covered up between feedings.