From the passenger seat of an airplane slowly circling the sagebrush prairie, Shawn Stewart directed a helicopter capture crew toward mule deer scattered below.

“It’s pretty incredible watching because those deer aren’t running in a straight line,” said the Montana Fish, Wildlife Parks wildlife biologist, who is based in Red Lodge.

“That is an impressive crew of people.”

On Feb. 28 the group captured 10 mule deer bucks and 30 does from the Belfry area in south-central Montana’s Carbon County. Once netted by the Alaska-based capture crew — which includes a helicopter pilot, netgunner and mugger — the deer received a quick physical examination and had their blood drawn by FWP research specialist Emily Almberg and veterinarian Jennifer Ramsey. As a last step the animals were fitted with GPS collars for a tracking study.

“This area, because of the chronic wasting disease implications” ranked high for the tracking work, Stewart said.

As winter transitions to spring across Montana, wildlife officials have been busy the past two months capturing and collaring elk, mule deer, bighorn sheep and pronghorns to learn more about their use of the land at different times of the year. The capture operations also help FWP assess brucellosis prevalence in elk herds in the Greater Yellowstone Area of southwestern Montana.

Justin Gude, Research and Technical Services section chief for FWP, said this year has been especially busy for capture crews because of eight new pronghorn studies spread across the state. This is just a portion of the 25 total capture projects. One of those studies will track pronghorns in the Paradise Valley.

“Pronghorn that winter in the Paradise Valley near Gardiner are partially migratory, with some animals moving into Yellowstone National Park, using a well-defined migration route near Mount Everts, and some animals remaining on winter range near Gardiner year-round,” according to the 2020 Montana Action Plan, which helps guides FWP’s wildlife operations.

The pronghorn population in the area has fallen from more than 500 to less than 250 animals, the plan stated. Poor forage conditions on winter range could be limiting the herd size. Also, some of the animals have moved to a new winter range farther north in the Paradise Valley.

“We’re interested in delineating core seasonal ranges and migration corridors that connect them,” said FWP wildlife biologist Kelly Proffitt, who is based in Bozeman.

She worked with a capture crew in the Paradise Valley during the first week of March. The goal was to net and collar 60 animals, but the group had to settle for 24 because of challenging conditions, including wind and lack of access to private lands that contained animals. In addition to the pronghorns, the crew collared 20 mule deer in the Gardiner area as part of a joint study with Yellowstone National Park and the University of Wyoming.

Because pronghorns are sensitive to stress, the capture crew had to work quickly. In about five minutes or less after being netted the animals are untangled, hobbled, blindfolded, blood is drawn, a nasal swab is taken to test for disease, an ultrasound measures body fat on the animal’s rump and a GPS collar is attached.

“We got into a pretty good routine,” Proffitt said. “The crew is very good at it.”

Similar studies across the state could help wildlife managers understand why pronghorn populations are doing so well in southeastern Montana, but animals in central Montana have never rebounded from a tough winter in 2011 and a bluetongue disease outbreak in 2011-12.

“A big part of the statewide effort is to collect more baseline information,” Proffitt said.

In a region that ranges from the town of Jordan west to Lewistown and from the Missouri Breaks south to Roundup, Gude said pronghorn populations used to provide about one quarter of the antelope harvest in Montana. Not now.

To better understand the situation, Proffitt and the helicopter crew worked northeast of Lewistown to capture and collar 55 pronghorns one day and 47 the next day, Gude said.

“That’s the most I’ve ever heard” of capturing in one day, he said.

As a result of the pronghorn population decline in central Montana, hunter effort has now focused on antelope in southwestern Montana’s Region 3, Gude said, places like the Big Hole, Centennial and Madison valleys.

Part of the funding for the pronghorn studies comes from a 2018 Secretary of the Interior order that promoted collaboration between states, federal agencies and private landowners “to improve habitat quality and western big game winter range and migration corridors for antelope, elk, and mule deer.”

“Everyone is pulling together to facilitate (pronghorn) movements and improve habitat,” Gude said. “And it’s providing us with a better understanding of our pronghorn populations.”

The federal order also helped fund the mule deer work in Carbon County and the capture of 50 cow elk in the Devil’s Kitchen area between Helena and Great Falls. Wildlife managers there are seeking more information on where the elk live, when they move and how they get to the locations at different times of the year, according to the Montana Action Plan.

The Devil’s Kitchen area has been the focus of extended elk shoulder seasons as FWP has attempted to focus hunter effort to reduce elk populations. The last information gathered on elk movements in that area dates back to 1990 when radio-transmitter collars were deployed.

The new GPS collars will send out the elk’s location 12 times a day for three years, as well as transmit a mortality signal if the animal doesn’t move for six hours.

The Belfry area of southwestern Carbon County is winter range for about 475 mule deer. By following the 40 Carbon County mule deer that were collared, Stewart is hoping to find out where those animals go in the summer.

“By May, those deer have totally disappeared,” he said.

In 2017, Carbon County was the first place chronic wasting disease was detected in Montana whitetail and mule deer. Since then, sampling for the disease has expanded. Last hunting season 142 positive animals were identified, including the first moose and elk with CWD. New CWD positive areas identified last year included the Libby region in northwestern Montana, near Sheridan and Twin Bridges in the southwest and more cases in southern and northern Montana.

Are the mule deer that winter in Carbon County trekking southwest into Yellowstone National Park, or going south into Wyoming where chronic wasting disease is more prevalent? Those are the questions Stewart is hoping the collared mule deer will help answer. When flying over the nearby Beartooth Mountains in the summer, he said he rarely sees mule deer. Maybe they are taking long treks like collared mule deer in Wyoming that have been monitored, he said. In 2018, one collared Wyoming mule deer doe made a 242-mile one-way trip to Idaho.

“If some of these deer migrate toward YNP, their summer range may overlap with summer ranges of the northern range mule deer herd that winters in the Paradise Valley,” the Montana Action Plan stated.

If that’s the case, the Belfry deer could be spreading CWD farther west.

“It may be that they are pretty local, you never know,” Stewart said. “When you collar animals you see some things that you never expect.”

The cost of collaring

The Devil’s Kitchen and Carbon County capture and collaring work were projected to cost $300,000, which is being provided by the Department of Interior, according to the Montana Action Plan. The majority of the expense is for the collars ($139,500) and the capture and sampling work ($95,000).

Much of the funding for other Montana Fish, Wildlife & Parks’ capture projects comes from federal taxes collected on the sale of guns, archery gear and ammunition through the Pittman-Robertson Act. Those funds are divided among states.

Although the focus of capture research is on migratory animals, Morgan Jacobsen, FWP information officer in Bozeman, said the agency doesn’t want to “understate the value of nonmigratory populations” and their importance to landowners and the public.

“We want to keep a holistic picture,” he said.

The longest recorded migratory mule deer herd in the world travels about a 150 miles from the Red Desert in southwest Wyoming to a place called the Hoback.

Fences are meant to keep animals in or out, not to let them through.

Meeting on Fresno Reservoir fishery set for March 12 in Havre

Montana Fish, Wildlife & Parks will hold an informational meeting in Havre at 6:30 p.m. on Thursday, March 12, regarding the Fresno Reserv…

More than 50 pronghorn have died in Wyoming from the bacteria that killed more than 75 of the animals last year, wildlife officials said.

One hundred samples taken in the last two years from cow elk in the Bangtail Mountains have tested negative for brucellosis exposure, accordin…

Last month, 16 moose were captured and radio collared south of Meeteetse as part of a cooperative research effort.

SHERIDAN, Wyo. — Results are in from the first in-depth look at chronic wasting disease prevalence levels in the Powder River Mule Deer Herd, … 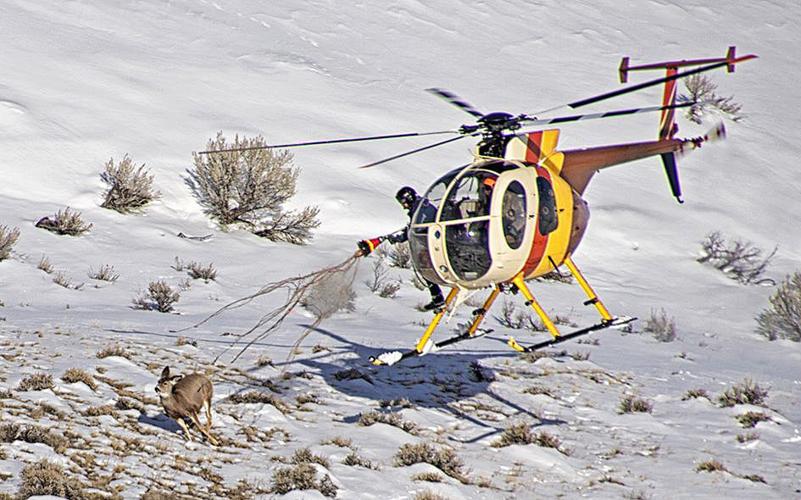 Netgunning is an airborne dance requiring perfect coordination between the pilot and gunner, as well as skillful flying as the target animal darts across the landscape 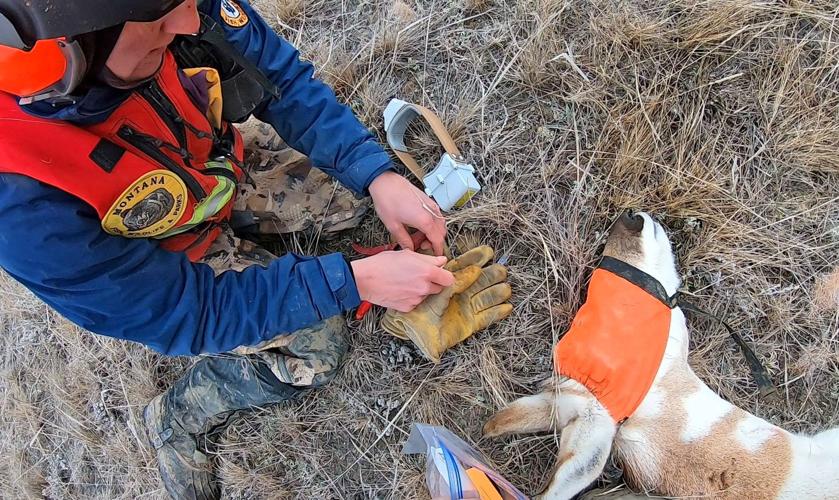 In a span of about five minutes or less the capture crew blindfolds and hobbles the animal, removes it from the net, then takes a blood sample. An ultrasound was also used to measure body fat. Lastly a GPS collar is attached. 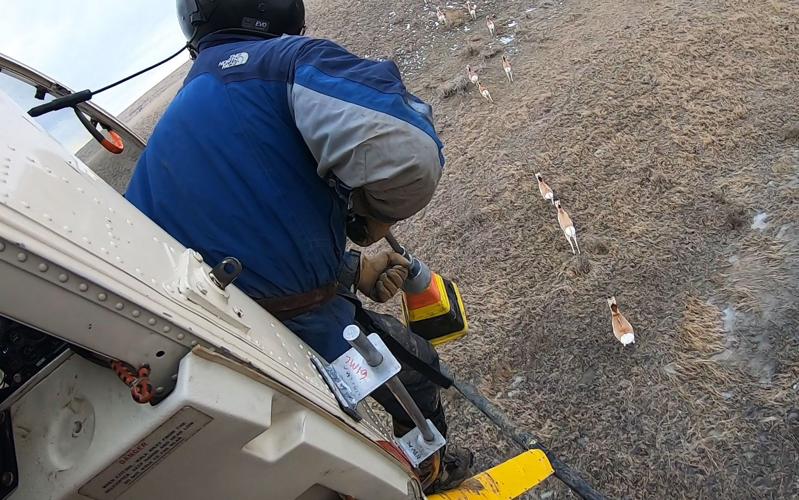 Paradise Valley pronghorns attempt to evade capture by a netgunning crew. The pilot tries to run the animals uphill so they are moving slower, otherwise speedy wildlife like antelope could be injured when netted. 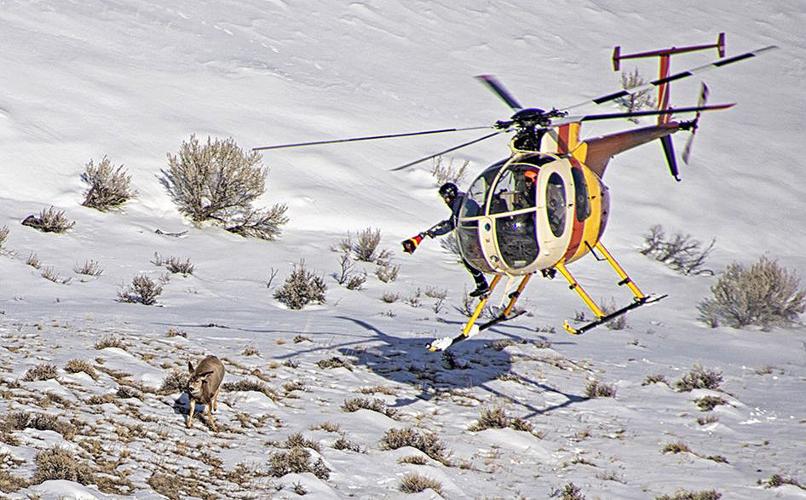 Quicksilver Air pilot Rick Swisher closes in on a mule deer doe near Belfry on Feb. 28 as a netgunner hangs out the door of the helicopter. 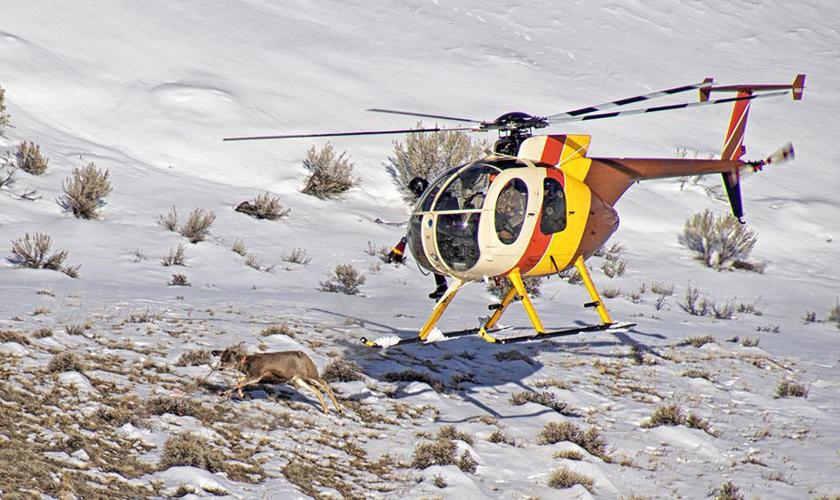 The netgunner successfully captures a mule deer doe near Belfry on Feb. 28. The gunner is part of a three-man team from Alaska's Quicksilver Air, which also includes the pilot and a mugger. The crew specializes in airborne wildlife captures. 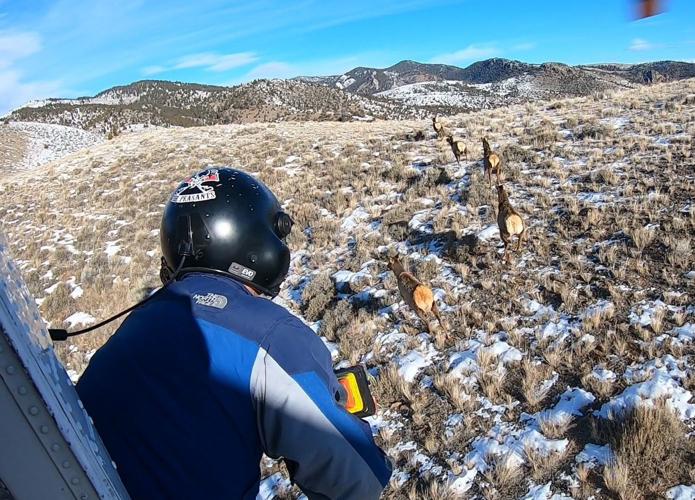 Looking over the netgunner's shoulder a helicopter closes in on elk near the Ruby Mountains. Montana Fish, Wildlife & Parks officials were capturing the elk to test for exposure to brucellosis.