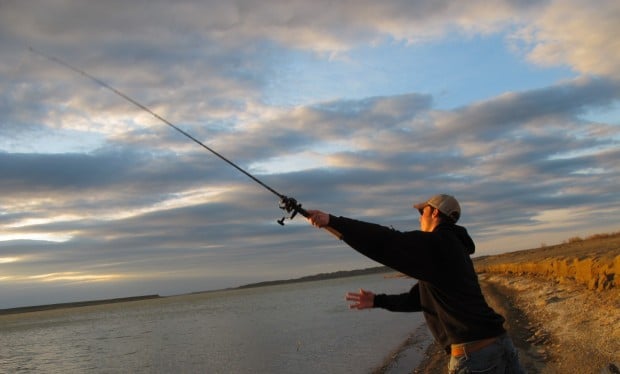 Alex French casts from the shore of Fort Peck Reservoir during a fishing trip last week. Fishing lures from shore can be a productive alternative to fishing from a boat on the large northeastern Montana reservoir. 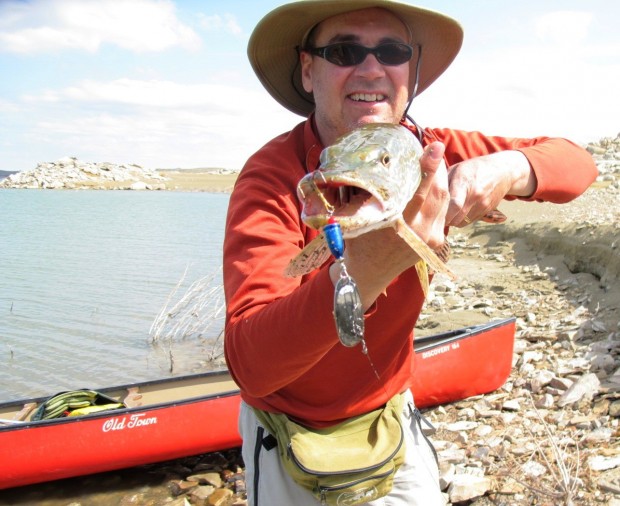 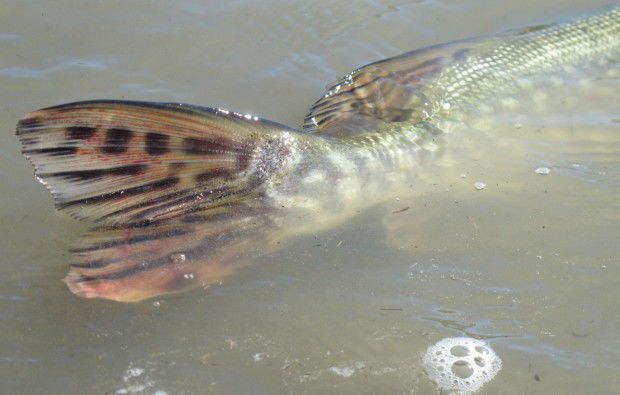 Northern pike have colorful and intricately decorated tails. They are one of the most common fish that shore anglers at Fort Peck Reservoir will catch. 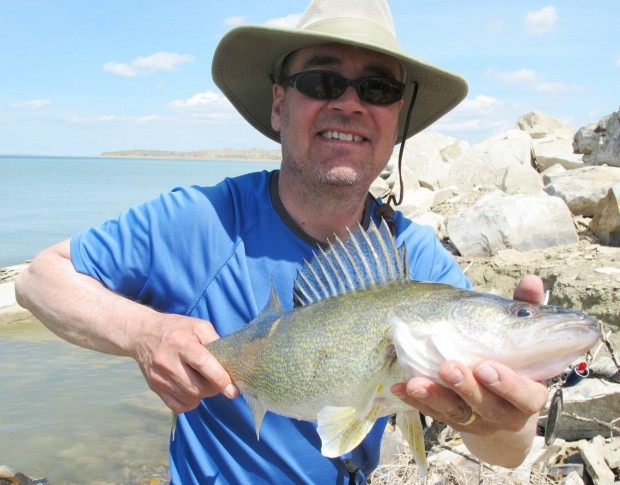 Shore anglers can even pick up the occasional walleye while casting the same lures that northern pike take. 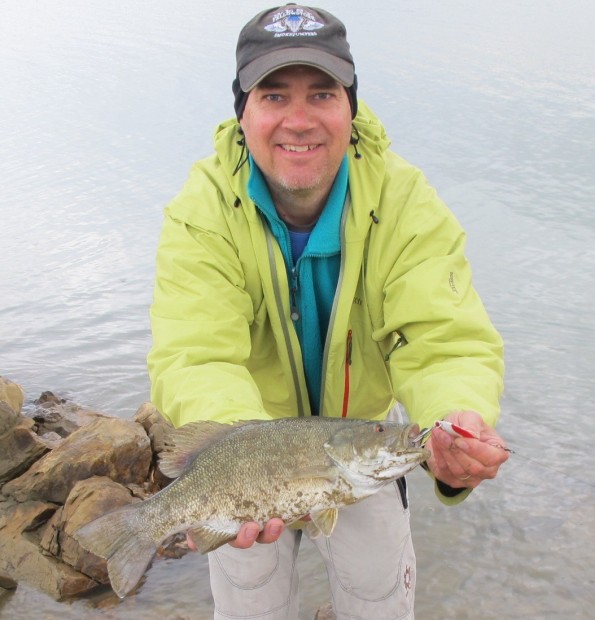 Smallmouth bass provide the most fight per ounce of any fish in Fort Peck Reservoir, aggressively striking large lures. They are also tasty table fare. 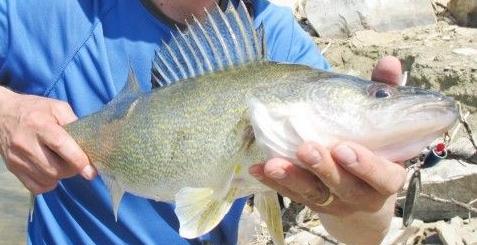 Trout Unlimited has increased its reward for information leading to the arrest and prosecution of those who illegally planted fish in northwest Montana lakes. 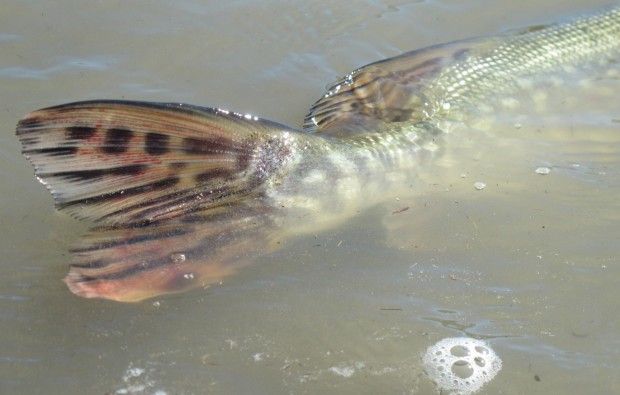 McGUIRE CREEK — Fort Peck Reservoir in northeastern Montana is so big and so remote, it can intimidate anglers who don’t own a powerboat or know someone who does.

That’s too bad, because the lake can be successfully fished from shore for northern pike, smallmouth bass and even the occasional walleye. Bait anglers also have the opportunity to pick up catfish.

The reservoir has many bays and points reachable by a vehicle and several developed camping areas, although the more remote routes are best navigated in a four-wheel drive. To figure out where to go, pick up a copy of the Charles M. Russell National Wildlife Refuge’s map. It shows the many roads into the reservoir. Even though routes on the map are numbered, they aren’t necessarily signed along the highway or county road from which they extend, so navigation skills come in handy in deciphering where to go. Think of it as an adventure. You can even come up with creative names for the unnamed bays and points on the map, such as: All Hope is Lost, Turn Back Now Bay.

What anglers should look for are places that have bays and points that create structure for fish. Rocky points are great places to hook bass, walleye and northerns. The sandier back bays are good locations to target pike that are cruising to ambush baitfish and minnows.

Last week, fish were hitting large silver and blue spinners, red and white Dardevle-type spoons and crankbaits that resembled perch. Don’t be shy about buying lures so big that the cashier skeptically and with raised eyebrows asks: “What are you fishing for?”

We were casting only 20 yards out from shore and managed to hook bass, pike, one walleye and the occasional goldeye, which I understand are very tasty smoked. Try varying the rate at which you reel in the line. Let it sink for a countdown of five or more, depending on the water depth, after you cast it out. Try stopping the retrieve for a moment, which will sometimes prompt a strike. Keep messing around until you find something that works and be persistent. Sometimes a fish will hit on the second cast, sometimes it won’t hit until the 30th cast. Like any fishing, the best times are in the morning and evening. You can catch fish in the heat of the day, they’ll just be fewer and farther between.

Because pike have such sharp-toothed mouths, many anglers resort to a steel leader at the end of their fishing line so the fish doesn’t break off. Instead, you may want to try one of the braided lines which are very tough but thin. We wound 150 yards of PowerPro Moss Green line onto our reels. I picked out a 30-pound test line that is only as big around as an 18-pound test monofilament line. I used a double clinch knot to secure the line to heavy duty barrel swivels so we could switch out lures quickly and easily.

One of the downfalls of fishing from shore is that anglers are bound to get snagged. Sometimes you can pull it free if it’s just hooked on vegetation or a submerged branch. I would pick up a short stick to wrap the line around to pull it free, since the braided line would cut my hand before it would break if I tried to tug it loose. Better yet, anglers who have a canoe or small pontoon boat can row out and often free the lure by tugging in the opposite direction.

Here’s a word of warning, though: Being on Fort Peck Reservoir in a small boat when the wind kicks up is a scary situation. If you do boat, be cautious, wear a lifejacket, stay close to shore so you can exit the water quickly if necessary and don’t float so far downwind that you have a hard time paddling or rowing back into the wind.

Likewise, driving on Fort Peck’s dirt roads can be dicey following a rainstorm. Imagine trying to steer on a road paved with grease and you’ll have an idea of what the clay roads can turn into following a dousing rainstorm. So although it’s hard to remember to look up when you’re fishing, it’s a good idea to keep a close eye on the clouds and to make a quick retreat if a storm is on the horizon. If you are stranded by a storm, it’s a good idea to always pack along camping equipment, food and water in case you have to wait awhile for the road to dry out. Don’t count on telephoning for help, since cell phone service can be spotty.

Another item that will be essential if you plan on keeping any fish for the cooler is a good stringer. The beefy northern pike can strain small stringers, and threading a rope through their toothy mouths can be difficult. A long stringer is helpful in keeping the fish far enough out in the water to make sure they stay wet and cool.

To unhook fish you’ve caught, don’t forget a pair of needle-nose pliers or a pair of forceps. You don’t want to be sticking your fingers into their mouths, especially the northern pike, which seem to reflexively clamp down as soon as anything is pushed into their mouths. A fish jaw spreader can help disconnect a deeply buried hook. A net is not necessary since you can beach the fish.

It’s pretty cool to be hoisting large northern pike, bass and walleye onto shore as boat anglers troll past. You can take comfort in the fact that you don’t have a boat payment, a bill for additional gas and the necessary upkeep that a boat requires. That should make those tasty Fort Peck fish fillets that you fry, grill or bake all that much easier to swallow.

You can get a copy of the Charles M. Russell National Wildlife Refuge map by writing the main office at P.O. Box 110, Lewistown, MT 59457, or phone 406-538-8706. You can also phone them for more detailed information on where you want to go.

If you don’t know how to fillet a pike, which has a Y bone down its side, check out one of the many videos on YouTube.

Don’t forget to pack for a range of weather conditions. Spring and fall can vary from warm to freezing cold. Summertime can get unbearably hot, so take plenty of water and sunscreen along with a wide-brimmed hat.

Alex French casts from the shore of Fort Peck Reservoir during a fishing trip last week. Fishing lures from shore can be a productive alternative to fishing from a boat on the large northeastern Montana reservoir.

Northern pike have colorful and intricately decorated tails. They are one of the most common fish that shore anglers at Fort Peck Reservoir will catch.

Shore anglers can even pick up the occasional walleye while casting the same lures that northern pike take.

Smallmouth bass provide the most fight per ounce of any fish in Fort Peck Reservoir, aggressively striking large lures. They are also tasty table fare.

Trout Unlimited has increased its reward for information leading to the arrest and prosecution of those who illegally planted fish in northwest Montana lakes.