Members of Mollie’s pack trudges through snow in Yellowstone National Park in early December. The pack, the largest in the park,

has moved out of its traditional Pelican Valley this winter and relocated to the area of Specimen Ridge.

Two members of Mollie’s pack walk single file during a trip in Yellowstone’s interior this winter. 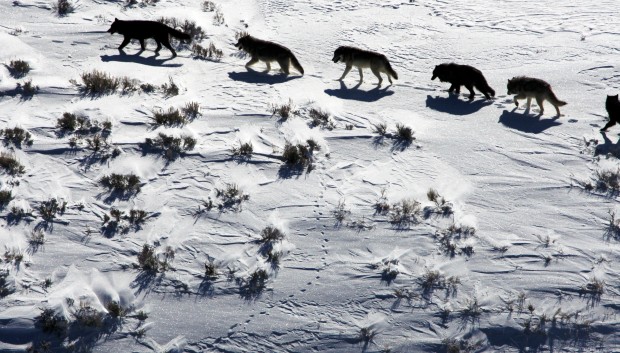 Mollie’s pack moves across a wind-blown landscape in Yellowstone

By BRETT FRENCH Of The Gazette Staff

Usually content to stay in Yellowstone National Park’s remote Pelican Valley, where they specialize in killing bison, Mollie’s wolf pack has migrated more than 20 miles to the Lamar Valley this winter, probably in search of food, and killing other park wolves along the way.

Their excursion isn’t uncommon. The wolves have explored the region as far back as 2000, and the pack’s founders came from the Lamar Valley, said Doug Smith, the park’s wolf biologist.

What is different is the extent to which they’ve migrated — all the way to the valley’s lower reaches, near the mouth of Slough Creek. Also unusual is the reason they’ve left their interior haven just north of Yellowstone Lake — a lack of snow. And the wolves have stayed longer than they typically do. Usually, they only visit the region for a few days. This time, they’ve already been there for more than two weeks.

Yellowstone has received little snowfall this season. The park opened only one entrance to snowmobiles in mid-December because other roadways were still bare or mostly clear of snow. Only late last week did the park finally allow snowmobile travel.

Snow is important to Mollie’s pack for hunting.

“Bison are the hardest prey for wolves to kill, so they need a little help from the snow,” Smith said.

Deep snow helps weaken bison, making it harder for them to feed and move. Wolves will also chase bison into deep snow, where they’re easier to attack without the wolves being kicked or charged.

The 19-member Mollie’s pack, the largest in the park, has become well-known for its adaptations to killing bison. To bring down the 1,000- to 2,000-pound beasts, Mollie’s has nurtured some of the park’s largest wolves. But even large wolves are no match for bison when there is little or no snow, like this year. And last year’s deep snow helped Mollie’s cull many of the weak bison from Pelican Valley, Smith said.

“So the bison that are there now are the cream of the crop,” he said.

Despite the lack of snow, the interior region’s elk have already left, so they are no longer an available food source.

Mollie’s pack traveled north, past the Grand Canyon of the Yellowstone and Mount Washburn to reach Specimen Ridge, which overlooks the Lamar Valley and its large herds of bison and elk. Because Specimen Ridge is the traditional home range of the eight-member Agate Creek pack, the intruders had to carve out some room.

Smith’s team had radio collars on two of the Agate Creek pack members. Both were killed in mid-December when Mollie’s pack arrived, including the alpha male and a yearling male. That makes it difficult for Smith to keep track of the Agate Creek pack. And it makes no sense for his team to fly, dart and collar other wolves as they typically do at this time of year until there’s enough snow on the ground to slow the wolves down, making them easier to track.

“So the beginning of my winter is not starting off well,” Smith said.

This intrusion north isn’t the first this year for Mollie’s pack. In early December, the pack moved into the Hayden Valley, just south of Canyon Village, and killed the alpha male of the 10-member Mary Mountain pack.

Seeing the opening, one of the subordinate males from Mollie’s pack shadowed the Mary Mountain pack for two weeks, keeping its distance. Eventually, the male was admitted to the pack, despite his relatives’ role in the death of the alpha male.

“That’s one of the joys of studying wolves,” Smith said. “They’re hard to predict.”

Mollie’s pack may also have been more restless this winter because of the absence of two wolves. One, a male, was killed when it was kicked in the ribs by a bison or elk. The pack’s alpha female has disappeared and a new female has stepped in to fill the void.

With the deaths, the park’s wolf population unofficially numbers about 100 animals — comprised of 10 packs and eight breeding pairs. Last year, the wolf population stood at 97. The numbers seem to have stabilized, Smith said.

Wolves are being seen daily on the road between Gardiner and Cooke City. The Lamar pack is the most visible and the Canyon pack has spent part of its time around Mammoth Hot Springs.

The nonprofit Yellowstone Association offers a three-day Winter Wolf Discovery package throughout January and February that includes lodging at Mammoth Hot Springs Hotel and most meals. Lamar Valley Wolf Weeks run in March and include several days of wolf watching and catered meals based at the Lamar Buffalo Ranch. For families and small groups, Private Tours provide naturalist guides for a day or more of wildlife watching and optional snowshoe/ski forays, with available lodging in cabins on the park's northern boundary.

For a a course catalog or more information, go to www.YellowstoneAssociation.org, write to the Yellowstone Association at P.O. Box 117, Yellowstone National Park, WY 82190, or call 406-848-2400.

Check out the hot spots this week.

BILLINGS — Fishing on the lower Yellowstone River has kicked in as flows have dropped and the water clarity is decent.

To enhance your next exploration of the Yellowstone River, Our Montana has finished a cell phone app that will provide everything from a heads…

The Fourth of July is Sunday, so your favorite fishing hole may have a few more people at it this week.

Members of Mollie’s pack trudges through snow in Yellowstone National Park in early December. The pack, the largest in the park,

has moved out of its traditional Pelican Valley this winter and relocated to the area of Specimen Ridge.

Two members of Mollie’s pack walk single file during a trip in Yellowstone’s interior this winter.

Mollie’s pack moves across a wind-blown landscape in Yellowstone